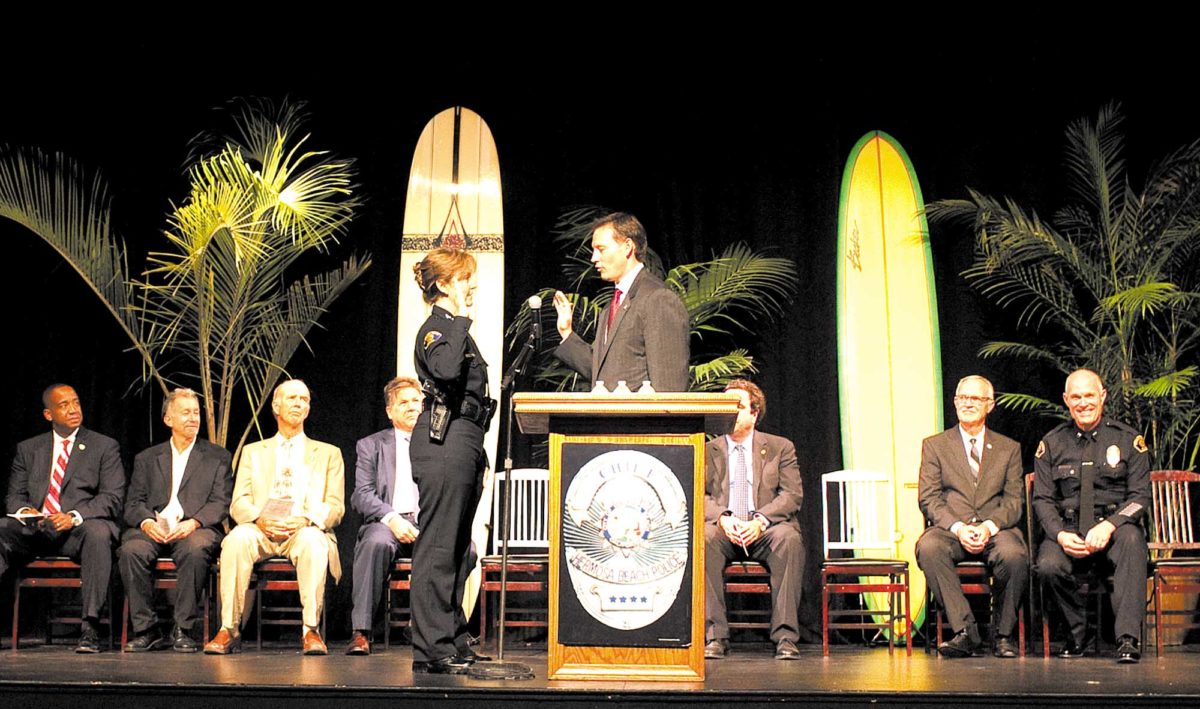 Hermosa Beach Police Chief Sharon Papa will retire at the end of the month, after six years of helming law enforcement in Hermosa and 40 years wearing a badge.

Papa, who has been on a leave of absence for much of the year, is stepping down due to her diagnosis with ocular melanoma, according to a statement from the city. Interim chief Milton McKinnon has been filling in for Papa, and she thanked him as well as the city staff and elected officials for her time in the city.

“It is difficult to leave this job and this department because I have enjoyed both so much,” Papa said.

The city’s human resources department will be conducting the search for Papa’s replacement. McKinnon, who previously held the rank of captain, will continue to serve as interim chief.

Papa was hired as chief of Hermosa’s department in September 2013. She became the city’s first female chief after a lengthy career in the city of Los Angeles, and was also the first woman to achieve the rank of assistant chief with the LAPD. She exits with a long list of honors, including receiving the lifetime achievement award from the Peace Officers Association of Los Angeles County last year. Among her accomplishments prior to arriving in Hermosa was creating the nation’s first law enforcement animal cruelty task force, which landed her an appearance on the “Animal Planet” television network.

Her decades in law enforcement enabled her to offer periodic doses of realism to Hermosa’s City Council, which implemented several challenging-to-enforce initiatives during her tenure, including a ban on smoking in public places. When pressed, for example, about enforcing minor violations on Pier Plaza, she noted that issuing citations was more time consuming than elected officials realized, and could pull the limited number of officers away from more urgent tasks like monitoring for potential fights.

She replaced Chief Greg Savelli, who served from 2005 to 2012. (Savelli passed away last month.) It took the city more than a year-and-a-half to find a replacement for Savelli. From a field of 47 applicants, the city narrowed its options down to Papa and Cecil Rhambo, an assistant sheriff with the Los Angeles County Sheriff’s Department. Shortly before the hiring process was completed, then-Mayor Kit Bobko issued a press release announcing his support for Rhambo. The release prompted a censure threat against Bobko, later withdrawn, from others on the council, and then-City Manager Tom Bakaly announced Papa’s selection weeks later.

Papa’s tenure in Hermosa featured both accomplishment and controversy.

She won praise for her outreach efforts and her work to make law enforcement more approachable. She created a Community Police Advisory board that gathered advice from residents and businesses for suggestions about how to improve policing in the city’s downtown.

Resident Sheryl Main joined the board after running into Papa at a social event. Main, a frequent critic of noise and litter created by bars and restaurants in the city’s downtown, said she was skeptical at first, but was won over by Papa’s drive for honest dialogue.

“At first I laughed. I said, ‘You know I’m the one who’s always up there criticizing you?’” Main recalled. “But she said, ‘That’s fine, I don’t want everyone agreeing with me, I want to hear other voices.’ That intrigued me. Normally, I would have said no, but that’s the kind of approach that interested me.”

But the effort to target Hermosa’s downtown occasionally led to criticism. In October 2017, a video, prepared at the request of the council’s downtown subcommittee, depicted Pier Plaza as a den of vice and disorder. The seven-minute video was criticized as biased, and Papa, who was a staff liaison to the subcommittee and presented the video at a city council meeting, took some of the heat. At the time, Papa said the video was filmed without police department assistance, but accurately depicted some of the challenges officers face there.

Papa also faced public criticism in the wake of the defeat of Measure O in 2015, a ballot measure that would have lifted Hermosa’s ban on oil drilling. On the evening of March 3, Chris Miller, a Hermosa native who had campaigned against O, was celebrating the measure’s defeat with others at The Standing Room restaurant on Hermosa Avenue. At the time, HBPD Officer George Brunn was writing a ticket nearby, and claimed to have heard Miller leading the crowd in chanting anti-police obscenities. Papa spoke with and later wrote a letter to Ken Hartley, former president of the Hermosa Beach Chamber of Commerce and Visitors’ Bureau, repeating Brunn’s observations and seeking an apology from Miller, who was on the chamber’s Board of Directors at the time.

The decision to write the letter was criticized by some on the council, and after being removed from the chamber board, Miller filed a lawsuit in federal court on October 2015, naming the city, the department, Hartley, and Papa as defendants. In interviews and public statements, Miller denied using foul language, an account supported by several witnesses. The complaint noted that the city’s public safety union had supported Measure O, and that although Papa initially contacted Hartley two days after the vote, Brunn did not record his observations in a formal report until eight days after the alleged use of obscenities. The city and the department settled the lawsuit in March 2016, approving a payment to Miller and an audit of the city’s internal affairs procedures.

Papa’s time at the top in Hermosa was her second in charge of a department. She had served as Chief of the Los Angeles Transit Police, which patrolled the county’s Metro system, before that agency was absorbed into the LAPD. The administrative switch meant Papa was technically demoted, going from the rank of chief down to commander. It was one of many challenges that Papa faced in a career that began when women in law enforcement were still novel. Her first training officer, she recalled in 2018, had said it was his goal to “make her quit.”

“You’re going to have your ups and downs,” Papa said at the time. “It’s how you deal with them that matters.”