Citizen of the Year Heffernan-Schrader turns school gardens into classrooms 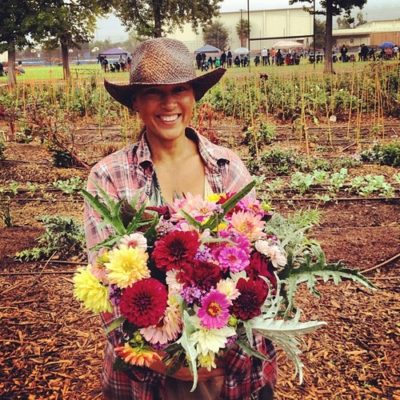 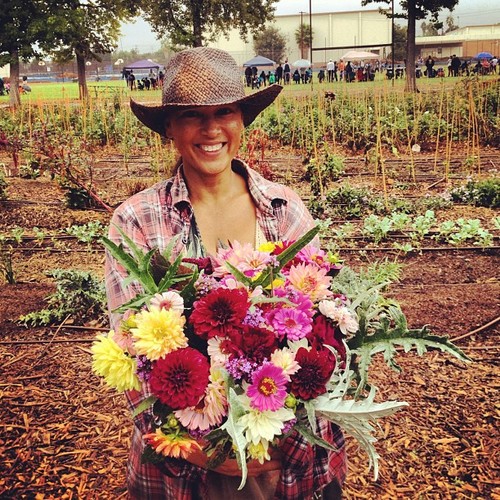 Diana Heffernan-Schrader with a bouquet picked from one of her school gardens.

Even though she suffers from severe allergies, Diana Heffernan-Schrader, the charismatic hat wearing garden lady, immerses herself daily in the gardens she helped build at local schools. Her love of nature and desire to volunteer at her children’s schools led Heffernan-Schrader to start Palos Verdes School Gardens (PVSG), a nonprofit that offers “edible education.” The Rancho Palos Verdes resident has collaborated with many South Bay organizations to bring kids closer to nature, and has chaired numerous Peninsula fundraising events. In recognition of her community leadership, Heffernan-Schrader has been named the 2018 Citizen of the Year by the Palos Verdes Chamber of Commerce.

PVSG grew from a single volunteer garden to serving four South Bay school districts with 15,000 students through weekly outdoor classes. There are PVSG gardens at 11 Palos Verdes Peninsula Unified School District campuses, as well as at Chadwick School and at schools in Torrance and Wilmington. PVSG provides a turnkey program to schools and very importantly, solicits donations and grants for garden maintenance.

PVSG began when Heffernan-Schrader noticed an overgrown patch of land at her daughter’s preschool, the Valmonte Early Learning Academy in Palos Verdes Estates. Heffernan-Schrader envisioned a garden where children learn, play and participate. She mobilized parents, teachers and administrators — 200 plus strong — who together built Valmonte Children’s Garden.

PVSG subsequently merged with Palos Verdes Sustainable Schools. “We take subjects like science and history that students are already learning at their grade level and apply them to an outdoors classroom,” Heffernan-Schrader said.

“I love this program and want it to be the hub that connects the other wonderful nonprofits we partner with in our community. Everyone wins when we work together,” Heffernan-Schrader said.

School administrators a equally enthusiastic about the garden program.

Silver Spur Elementary School Principal Marta Jevenois-Richardson said, “Our PVSG Outdoor Classroom program extends the traditional classroom outdoors and is a living laboratory where lessons are tied to state curriculum standards. The garden encourages inquiry-based learning and hands-on learning. The PVSG program also teaches students how to compost food waste and use it in our edible garden.”

Another principal, Dr. Taylor Holloway of Vista Grande Elementary, said, “Our students have the opportunity to learn about something that matters greatly to them in an outdoor environment and in a hands-on manner. They’re learning about nutrition and sampling food they may have never tried before.”

Food harvested at PVSG gardens is sent to local restaurants, including Good Stuff in Rolling Hills Estates and Mar’sel at Terranea Resort in Rancho Palos Verdes. “What is fresh and in season is really how we operate,” said Heffernan-Schrader.

Heffernan-Schrader did not pick up a spade or garden shears until she was an adult. However, she always felt a kinship with nature and lived on an atoll in the Marshall Islands for a short time.

Heffernan-Schrader grew up in the South Bay and attended UCLA, where she majored in economics. While a student, she worked in accounting at the Daily Breeze and remained there for 10 years. At the newspaper, she was mentored by executive Patricia Peterson, who Heffernan-Schrader said made her feel “very empowered to make good choices to be a leader at a young age. Pat gave me a lot of confidence to gain leadership skills and apply them.”

“I’ve always had very strong female roles models,” said Heffernan-Schrader who hopes to help pave the way for other women and her daughters Sophia and Stella.

In addition to PVSG, Heffernan-Schrader has been involved with the Palos Verdes Peninsula Land Conservancy, the Peninsula Education Foundation and Silver Spur PTA. Given her financial background and creativity, it is no surprise that Heffernan-Schrader spearheaded many fundraising events.

On October 14, she co-chaired along with Sharon Ryan the Palos Verdes Pastoral, a garden to table fundraiser for the PVPLC. This annual sold-out event was a celebration of nature and food and was held under the stars at Terranea Resort.

“It was a beautiful evening,” said PVPLC Executive Director Andrea Vona. “Diana is such a pleasure to work with; she’s incredibly fun. She has great visual aesthetics and she leaves such a wonderful creative beautiful impact on any event she’s associated with. We’re really fortunate to have her in our community.”

Heffernan-Schrader served as a Peninsula Education Foundation trustee for five years as co-vice-president of community relations. “Diana is always willing to help wherever needed. The last couple years, she has donated pumpkins to PEF to be given as thank you gifts to major donors,” said past PEF president Roma Mistry.

At Silver Spur Elementary, she led the Global Water Challenge, a program designed to inspire students to conserve water. School Principal Jevenois-Richardson remarked that Diana personally taught lessons to their Grades of Green team. Heffernan-Schrader invited guest speakers and built an award winning rainwater collector in the school garden. At the same time, Heffernan-Schrader raised funds for students in Uganda.

Silver School Principal Jevenois-Richardson said, “Diana is a risk taker and a trailblazer. She is innovative and ambitious. She sees a goal and goes for it, Diana has grand ideas… and no matter how grand her ideas are, she sees that they come to fruition.