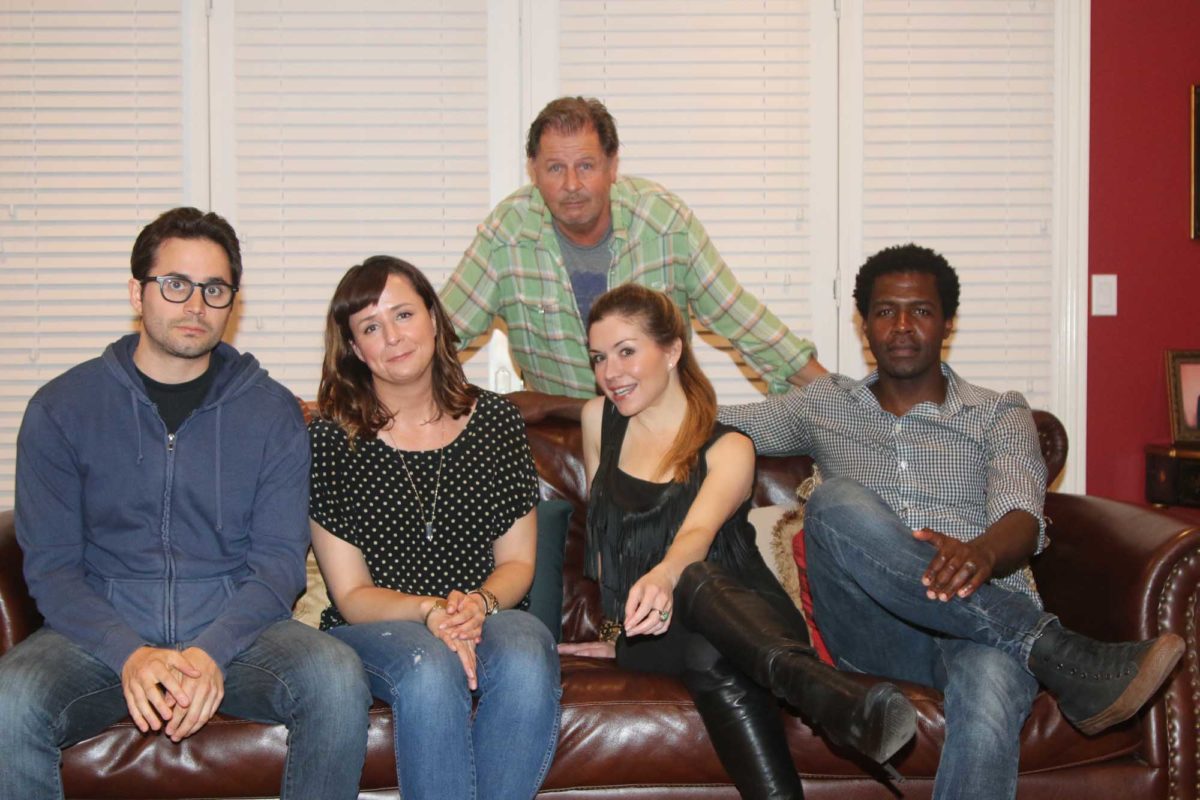 The cast of “Seminar,” which premiers at the Second Story Theater at the Hermosa Beach Community Center on Friday. Front, from left, Stephen Borrello as Martin; Kirsta Peterson as Kate; Whitney Anderson as Izzy; Garland Scott as Douglass; in back is Tom Killam as Leonard. Photo by Ryan McDonald

You can throw a kid in detention, but the reluctant adult learner is the real troublemaker. Those under 16, after all, don’t have much say about showing up for class. It’s later, as learning becomes a matter of greater choice and greater expense, that we start to wonder why we should listen to a word the person in front of the chalkboard says. Sure, there are certificates and hiring committees and recommendations from trusted friends. But when we finally step into the classroom, these vanish, and the teacher must have something else to keep us paying attention. For the moment, call this quality “authority.”

Students of Leonard, the writing teacher at the center of “Seminar,” a play opening at Hermosa’s Second Story Theater on Friday, justly start to fret over whether he has any idea what he is talking about. Though he sells himself as a publishing world insider and an eagle-eyed editor, Leonard clearly no longer sits with the Alice Munros and the Ian McEwans at the round table of modern literary fiction.

The arc of his fall from grace is not entirely described, but the audience has plenty to go on to hold Leonard in low esteem. He is pompous enough to reference his “time with Penn Warren” at Yale, underprepared enough to forget the names of the few students he has, and unethical enough to sleep with at least one of them. But just when the students are on the edge of mutiny, his words start to take hold as if backed by the barrel of a gun.

Toward the end of the play, Leonard faces a bruising critique from Martin, one of the four hopeful writers enrolled in Leonard’s intimate and expensive fiction workshop. At first, it seems as though the student might have the edge on the teacher. Martin, played by Stephen Borrello, stares intensely through round glasses. Borrello manages to make Martin earnest even while joking around, and morally certain even as his personal life starts to crumble. His hesitancy about letting anyone read his writing lends him a purity amidst his fellow students’ cynical careerism; his denunciations of Leonard carry something of the filibuster from “Mr. Smith Goes to Washington.” (The characters are not given last names, but Martin is certainly the type of person who, born in another century, would have nailed a list of 95 criticisms to the door of a powerful bureaucracy.)

No one, on the other hand, is more cynical than Leonard. As played by actor Tom Killam, he moves through the world with a kind of practiced indifference and bemusement at those who view life otherwise. His default facial expression is halfway between scowl and smirk, and he seems more likely to laugh than to wince at another’s misfortune. At one point, he takes two weeks off for a sojourn to Somalia; rather than inspiring compassion, his time in the failed state becomes just another reason to call people in America “pussies.”

But to borrow from literary critic Lionel Trilling, while Martin is authentic, Leonard is sincere, and it is sincerity that carries the session. After Martin airs his dissent about the class’s value, Leonard begins to tell Martin, and the three other students, just what Martin’s future holds. It is a lengthy monologue and a remarkably specific vision, filled with dates, durations, and vivid evocations of the particular embarrassments that await Martin in a less-than-fulfilling writing career.

The words land with less spite but more resonance than the mere insults Leonard has leveled previously. Killam’s delivery is drained of the sarcasm from other scenes, and becomes almost reportorial. It’s a delicate piece of acting, to have a character seem matter-of-fact without sounding like he is, well, reading from a script. Killam’s performance communicates what is perhaps the play’s most delicious idea: the resemblance between creating compelling fiction and being a compelling teacher.

It would give too much away to say exactly what he forecasts. But somehow, as the predictions pour out and the room for vacillation vanishes, Leonard becomes even more credible. There is nothing of the supernatural in the play, no indication that Leonard can peer into the future, but his words carry the force of prophecy. It’s hard to put a finger on why, but the setbacks and failures Leonard foresees for Martin hum with verisimilitude. They add up. They seem like a life Martin could lead, even if it’s not what anyone pictured before that moment.

“Seminar” is the first show of New Stuff Productions, a new company from two familiar faces in the South Bay theater scene: producer Lois Bourgon and director Jack Messenger. Talking about New Stuff, they drift easily into the language of a manifesto.

“We want to show plays that are provocative, edgy, and have never been performed in the South Bay,” Messenger said.

They have begun in a logical place. “Seminar” was written by Theresa Rebeck, and premiered on Broadway in 2011, with the late Alan Rickman as Leonard. (Harry Potter fans will see something of Severus Snape in the character; lovers of “Die Hard” will have to strain a bit more, but Hans Gruber’s finger-on-the-detonator confidence is in there too.)

Critics lauded the play and rewarded it with nominations for various drama awards, but it is not what you would call a box office titan. Messenger said that he and Bourgon deliberately chose a play that was “not ‘The Sound of Music’ or ‘The Goodbye Girl’” in part out of frustration with seeing the same things performed again and again.

“Unlike the works of Neil Simon, Agatha Christie or Noel Coward, this play is not seen by a lot of people,”  Messenger said.

It’s understandable why “Seminar” did not become the next “Mousetrap.” There is little in the way of action; the most provocative gesture in the play is the tossing of manuscript pages on the floor, which happens repeatedly. It takes place entirely within the confines of a New York City apartment, with little change in scenery to dazzle the eye. And it is cloistered, a play concerned with the tiny, insular and rarified publishing scene. It makes few concessions to an audience not familiar with this world, and many viewers may be left reaching for Wikipedia at the uncontextualized mention of, say, “Yaddo,” a writers’ colony in Saratoga Springs.

And if “Seminar”  asks something of audiences, it is also not easy for those on stage. Befitting a play about writers, the dialogue is dense and fast, with key emotional shifts happening all the time. This became clear at a rehearsal last week, with actors occasionally calling out for help with lines. Along with showing how much there is to memorize, being forced to backtrack made it apparent how much nuance can be missed by omitting just a few words.

“This requires a lot of memory work. But if I can keep this moving, it’ll cook,” Messenger said.

Bourgon and Messenger assembled a cast of professional veterans to make “Seminar” happen. Whitney Anderson plays Izzy as the most clear-eyed of the students. She perceives the way her attractiveness may make people presume her to be less talented as a writer, and is clever enough to find ways to use this to her advantage; watch for the way she lingers over her exits, as if to suggest that a different choice of words might convince her to stay. Garland Scott is Douglass, a writer suffering from a different malady of expectations. He is a son of Hollywood privilege, and Scott turns him into the character most desperate for approval; he looks like a suspect sweating under the lights of a precinct interrogation room when Leonard is paging through his work. Most enjoyable of all is Kirsta Peterson as Kate, who chafes at Leonard’s teaching even as she starts to take on some of his amoral frivolity. It is her apartment where the class gathers, but Peterson’s performance suggests someone who is never fully at home, even inside her own skin.

Together with Borrello and Killam, all of this complex psychology points to something other than novelty at work in the choice of “Seminar.” It is not just an unfamiliar play; it is a difficult one, likely appeal to a different audience than the one Messenger says typically fills the seats in South Bay theater. Messenger hopes that New Stuff can build up a subscriber base that includes people outside the South Bay, especially those in the theater world. “Seminar” fits this bill because it raises difficult questions about the nature of creative pursuits.

Namely: Can writing be taught? The play is agnostic at best, though it does not make Leonard into a swindler or a charlatan. He is instead just another entry in the history of less-than-helpful literary advice. Hemingway is reported to have said, “Write drunk, edit sober.” Bukowski versified, “unless the sun inside you is/burning your gut/don’t do it.” Like Hemingway and Bukowski, Leonard has a deliberate macho swagger, and his personality often overwhelms the work he is there to do. But if his students fail, it is not entirely Leonard’s fault; there is no lifehack or miracle ingredient for good writing. Teachers still struggle to do better than the three-word adage of Ezra Pound: “Make it new.”

“Seminar” runs from June 14 through June 30 at the Second Story Theater inside the Hermosa Community Center. To purchase tickets, go to http://www.newstuffproductions.com/on-stage.html