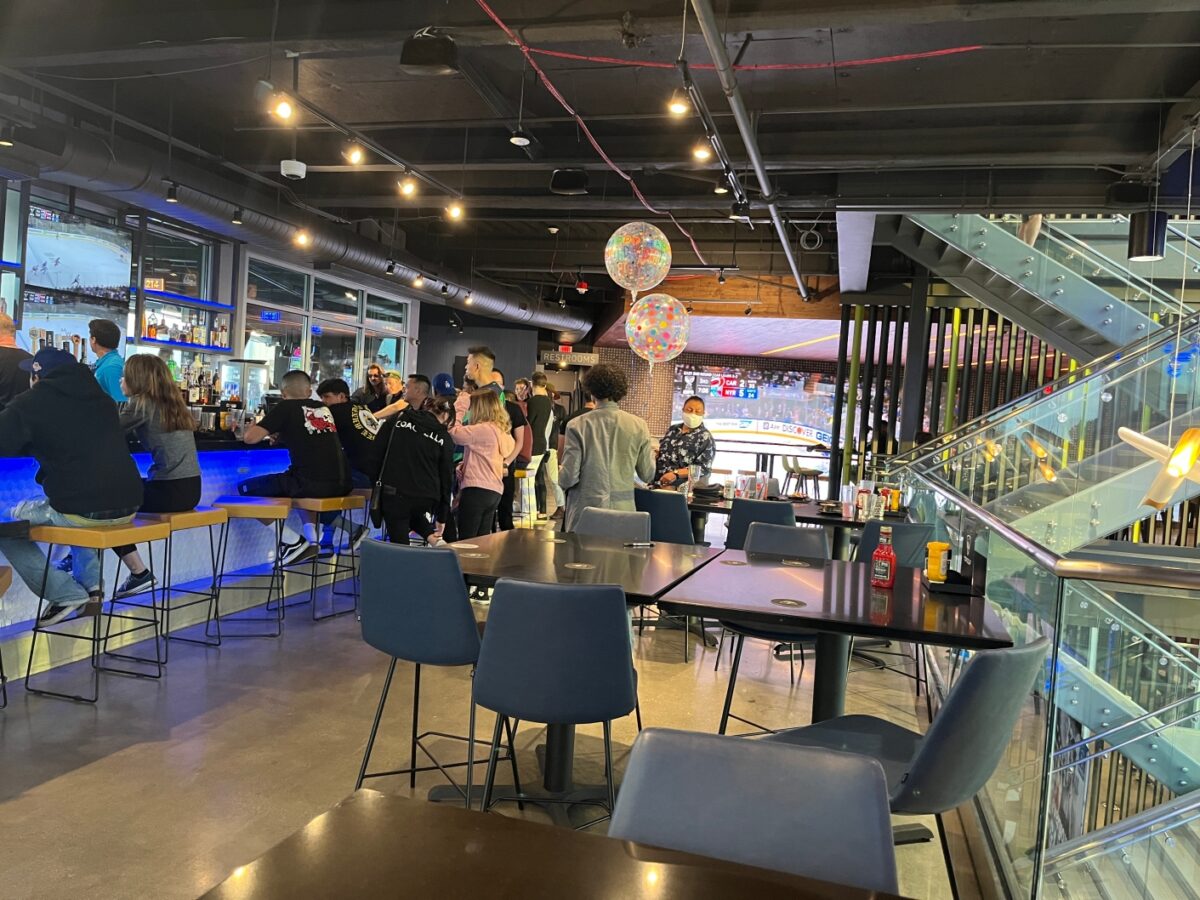 The interior at the driving range's dining area. Photo by Richard Foss

I was the child of an avid golfer, and grew up liking everything about the game except playing it. The players were eye-catching in either spotless whites or garish plaids, and their shoes made a curious crunching noise when the cleats hit anything but grass. The long walk in a manicured landscape allowed glimpses of waterfowl and small animals, the scent of freshly cut turf, and precious time to chat with my dad about anything or nothing. After perambulating around the course, we would stop into the country club for old school eats in a place festooned with yellowing pictures of golfers of days past, advertisements for golf balls and clubs, and pictures of Scotland.

Alas, I was terrible at the game itself. I was nearsighted with very poor depth perception, so even if I could see that little flag that marked the hole, I had no idea how far away it was. For me the game involved hacking the ball in the general direction that somebody pointed, and then soliciting help to find out where it went. However tolerant experienced players were, they did not want me in their foursome. They would put up with me at the driving range, where my lack of skill was less of a problem, as long as I was quiet. The range was a hushed place so golfers could tell a shot was good even before they saw where it went by the clicking sound when the club hit the sweet spot. 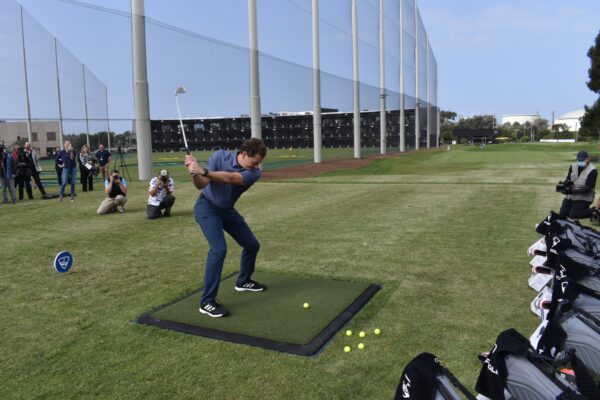 The city course at El Segundo had all these attributes in miniature. It was a nine-hole course with a neat little café rather than the opulent and somewhat stuffy country club restaurants. Snobs might sneer at the short fairways and complain the course was loud thanks to airport noise and highway traffic, but it was 10 minutes from our house so we went there a lot. When the course sold a few years ago I barely noticed, but when I saw an artist’s conception of the place and pictures of other TopGolf locations, it was a shock. Surely that was an exaggeration — they couldn’t be putting video screens everywhere and making the whole place look like a sports bar.

I have as little inclination to play golf as ever, but had to go there for dinner to investigate the experience. The parking lot is fuller than I remember from the old days, so the new style was obviously popular, and they even offer valet parking. There are two dining options, a snack bar with a view of the course that offers old school serenity, but a very limited menu; or the driving range with a more extensive selection. We opted for the driving range, and I thought to ask which floor the kitchen was on. When they said it was on the second floor we headed there, because I like my food fresh, and it’s a long trip to some parts of this vast facility. When we walked upstairs a birthday party was in progress at one table, one of several such celebrations we saw on our visit. The crowd was decades younger than the one that used to frequent this space, and the bar was well stocked with people chatting and taking selfies. Though video screens were everywhere the place wasn’t excessively loud, and it had an undeniable energy.

A cheerful and polite server named Peter offered us menus and drinks, and impressed us with his informed suggestions about the offerings from both the kitchen and bar. We started with orders of lemon pepper wings and a cobb salad, plus cocktails. The bar menu was heretical by country club standards, with all the featured drinks based on rum, gin, or vodka rather than Scotch. Golf bars used to celebrate golf’s heritage by prominently displaying old bottles of peaty stuff from the highlands and making it the mainstay of mixed drinks. My father disliked scotch, but pretended to enjoy it because it was what everyone at the golf course would buy when they’d had a particularly good round. I had a glass of Top Golf’s sangria, which was quite good, with wine, vodka, and Aperol harmonizing with the fruit juices, while my wife had a strawberry mule. The combination of strawberry purée, gin, lemon, and ginger beer was not to my taste, but she enjoyed it.

After we ordered, I walked outside to the second level of the driving range, which is visually chaotic. There are two giant TV screens at the far side of the range, and I wondered whether you get a special prize if you can break one with your golf ball. I couldn’t imagine a serious golfer practicing there, because the flickering of the screens made it difficult to see the ball in flight. There are also TV monitors next to the tees, which for some reason were playing Angry Birds. There are more TV screens with three different programs going on at the same time. Their bouncy hip-hop and pop soundtracks add to the sensory overload. It was almost impossible to believe that this could be in any way related to the environment I remember, where I was shushed for turning the pages of a book too loudly.)

The young and very casually dressed crowd seemed to enjoy every moment of it, though I noticed that some were hacking at the ball and not watching to see where it went before teeing up another.

The wings and salad arrived shortly after I returned from my survey of the great outdoors, and both were pretty good. The wings arrived hot and tasted like they had been exposed to real lemon juice rather than dusted with a powdered seasoning, and though we didn’t care for the sweet ranch dressing the blue cheese hit the spot. The cobb was nice too, with slices of moist grilled chicken breast, but it was served in a small mixing bowl that made it difficult to serve without spilling greens on the table.

We ordered second cocktails (a good mai tai and a so-so blackberry smash) and waited for our main courses, a burger and a chicken sandwich. And waited some more. Peter came by to apologize that the kitchen was backed up, but assured us our order was not forgotten. We had a full hour to nurse our drinks and watch the ever-changing parade of games across the screens. These included the expected baseball and basketball, but also hockey, lacrosse, and something I couldn’t identify. My wife and I fell into conversation about all of the ways people compete, and why it’s enjoyable to watch. 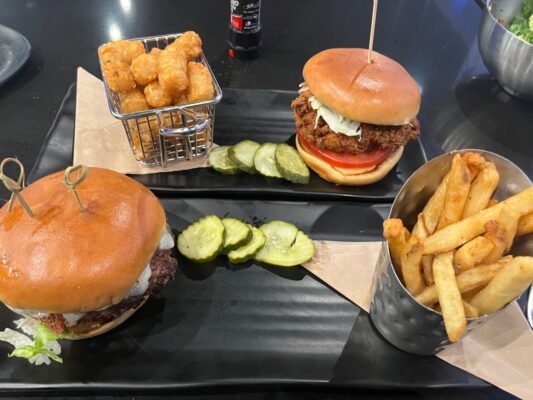 The food is the closest TopGolf comes to anything traditional to a golf course. Photo by Richard Foss

Unfortunately, when our food finally arrived it was uneven. The fries were cold, tater tots hot, burger warm and the chicken sandwich fresh from the fryer. The chicken sandwich had a good buttermilk crust and slightly spicy slaw that wasn’t so soppy that it soaked the bun, a balance that not everyplace gets right. The burger was so-so, a generously sized meat patty cooked the medium-rare I requested, but served on a cold bun with only a stray leaf of lettuce and sliver of tomato. It wasn’t bad, but I’d take the chicken sandwich any day.

Desserts were offered, and we considered doughnut holes injected with Bavarian cream or chocolate sauce, but decided that we didn’t want to wait for something else from the overburdened kitchen.

The experience at Top Golf will please anyone who likes a sports bar ambiance on a grand scale. I enjoyed it for the people watching. There are a lot of folks having a good time, and that spirit can be infectious. I regard it as a novelty, but some people who might never otherwise pick up a club may try it here and actually get hooked on the game. ER