Cy Twombly: Something to be desired? 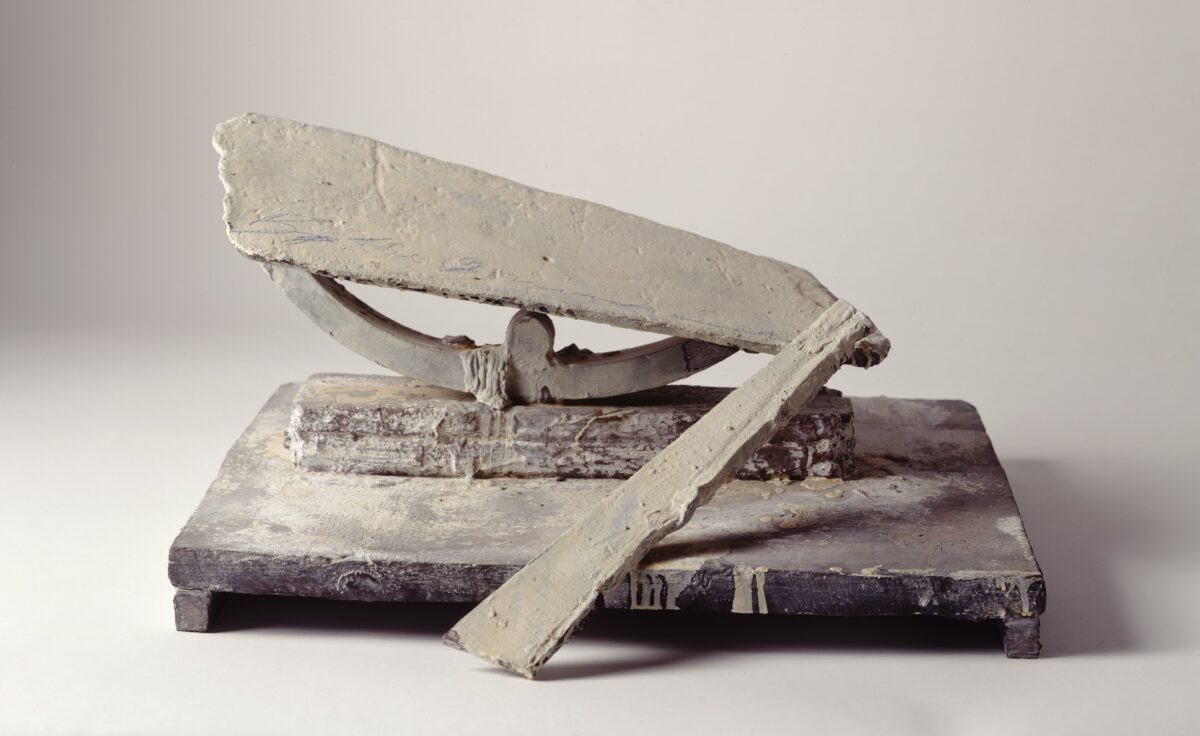 Works by Cy Twombly at the Getty Center

It would be fair to ask me, Why did you persist in reading through the entire catalogue for “Cy Twombly: Making Past Present” when you were all but convinced that he’s an overrated artist? It’s because I wanted one of the essay writers to enlighten me after half a century of looking at, or being subjected to, his paintings, drawings, and sculpture.

After his death in 2011, Roberta Smith of the New York Times labeled Twombly “a towering and inspirational talent” and placed him in the company of Robert Rauschenberg and Jasper Johns, a trio which came to some prominence in the 1950s. 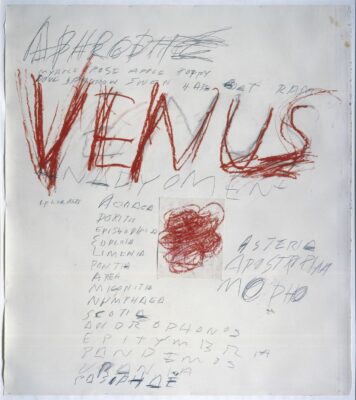 Italy hit the spot. Twombly moved there in 1957, and although he also resided back in the U.S., it was in Italy that he spent his final days. In order to decorate his Rome apartment, he collected classical artifacts and — how else might one afford them? — broken or fragmented heads, busts, and statuary.

He enjoyed what has been referred to as a poetic engagement with antiquity. He read the classic Greek and Roman authors and many of his canvases bear the name of a Greek god or Roman hero, poets and philosophers as well, scribbled across it — a long list that includes Orpheus, Dionysus, Plato, Homer, Sappho, Apollo and Venus. The impression one gets as a result of this is that now there is a classical and literary element to Twombly’s work and therefore it makes him fodder for a Getty exhibition. According to Matthew Teitelbaum and Timothy Potts, respectively of the Museum of Fine Arts, Boston (where this show originated), and the Getty here in L.A., “If Twombly appears to have ‘looked back’ at the ancient world, he also constantly brought it forward into the time of his own production… The erasures, ambiguities, and sometimes outright illegibility in Twombly’s work speak to our imperfect recovery of the past, while leaving room for new and renewed encounters in the future.” 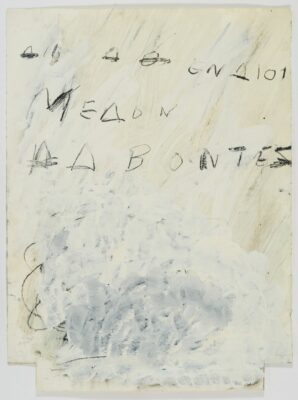 It seems as if they’re making a case for erasure, ambiguity, and illegibility as something praiseworthy. I guess so, if you can pair Twombly’s canvases and “sculptures” with examples of authentic ancient art.

“What we can’t see or read,” says Mary Jacobus, “forms part of Twombly’s stylistic repertoire: the casual-seeming, off-hand acts of illegibility.” But what she can’t bring herself to say is that the scrawls are atrocious. And neither can Christine Kondoleon: “The writing of texts in pencil is key to Twombly’s innovation of introducing language into painting.” I fail to grasp how this kind of mark making is to be esteemed, especially when at times it’s just the words on the canvas and nothing or very little else.

And then, of course, we have the works themselves, some of them with titles that can conjure up images that are actually hard to discover or decipher in the pictures themselves. So here’s the question. When the images are abstract, should the titles be taken literally?

Kate Nesin writes at length about Lexington, Virginia (where Twombly also lived), and Italian public places while trying to interpret “Blue Ridge Mountains Transfixed by a Roman Piazza,” which Twombly created in 1962. She zeros in on the word “transfixed”, which, she says, “betokens a rapturous absorption, the genuine affect that so often motivated Twombly’s engagement with textual and material figures, stories, and objects from history; but… harbors an edge of violence as well, being done to or acted upon, paralyzed if also compelled.” In short, she finds “a more or less literal relationship between the painting and its title.”

Really? A more “literal” interpretation of the sketch might conclude otherwise: five planks, constituting a walkway, between two clumps of snow-covered brown vegetation. Does Nesin truly see a mountain range and a Roman piazza? As anyone who makes art knows, the title you toss into the ring will have critics drooling over it and spouting nonsense as to what it means. In art, the cart pulls the horse. 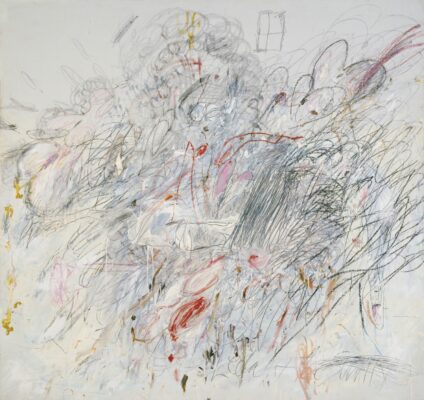 In a footnote on p. 241 of the catalogue Twombly is quoted as saying, “People make too much of the mythological titles,” adding, “For me they are just a springboard.” And Nesin herself should have suspected as much, because she also writes: “Twombly was notoriously taciturn, loath to speak about his work and often elliptical or shrugging when he did.”

The catalogue also contains several so-called Leda and the Swan-inspired pictures, which look more like arrested fox-in-the-henhouse footage with feathers everywhere. Mary Jacobus writes: “The most potent myth of transformation involving a swan is Zeus’s rape and impregnation of Leda — an uncomfortable myth for our #MeToo era.” Zeus as Harvey Weinstein? I think it’s inappropriate to bring up and apply #MeToo to Greek mythology. Why don’t you just say while you’re at it that sexual assaults by Russian soldiers is an uncomfortable reality for our #MeToo era? At least you’d be more topical.

As I mentioned earlier, I read through the catalogue looking for someone to enlighten me as to why Twombly is considered an artist of true significance. None of these authors (Anne Carson excepted), writing for their academic colleagues and not for the curious lay reader, could do it, and not even Kirk Varnedoe, when I searched elsewhere. In his defense of Twombly’s work he noted that its uniqueness resided “in the orchestration of a previous uncodified set of personal ‘rules’ about where to act and where not, how far to go and when to stop,” and so on. 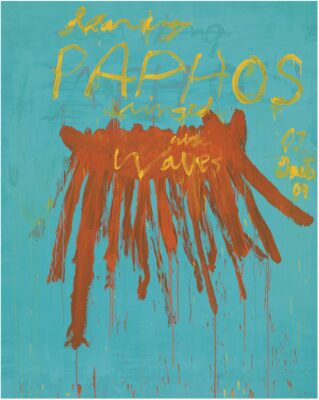 I’m looking for art, and it can be abstract or figurative, that offers something that can arrest and hold my attention, and then pull me closer, embracing my curiosity and firing my imagination. A few of Twombly’s works manage to do that, for various reasons, mostly because there’s a touch of something vaguely figurative that I can play off of, such as “Death of Pompey” (1962) — is that a fatal neck wound? — and “Leaving Paphos Ringed with Waves (III)” from 2009, the latter suggesting a flotilla of boats in the Aegean. This one also contains something a little rare in Twombly: rich, alluring color and form.

I’ll continue to look at the other pictures, and maybe one day I’ll have an epiphany and will need to apologize on hands and knees to the authors of these essays. But not with the sculptures, as they have no value for me.

Some of the large, sprawling canvases would make beguiling backdrops for fashion photography, which could be a fun thing, and which furthermore recalls one of Twombly’s comments about his work that I found in the New York Times. “It’s more like I’m having an experience than making a picture.” Perhaps that’s a good starting point for many of us as well.