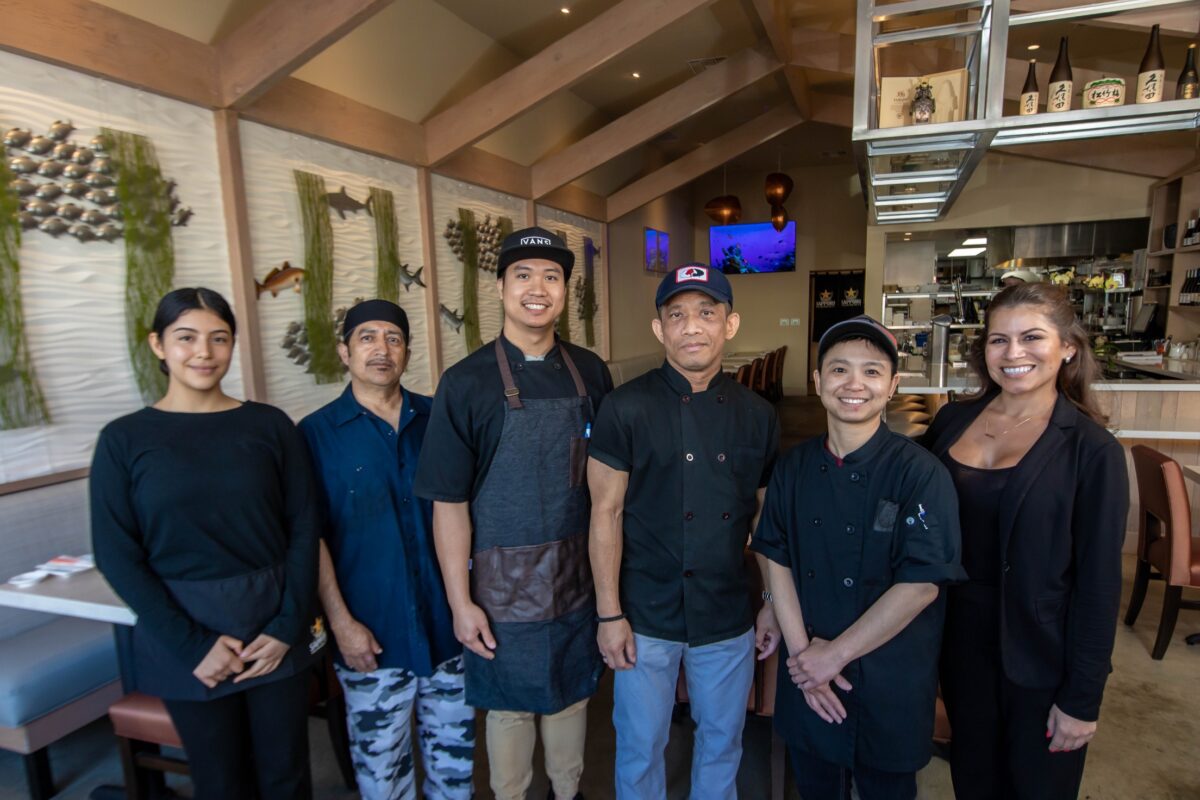 It took a while for Manhattan Beach’s newest Japanese restaurant to open, but it was worth the wait

“You’ve been reviewing a lot of Asian food lately,” remarked a regular reader. She was correct. I have been eating it because you have, and new restaurants have been opening to serve it to you. Existing restaurants have been upping their game in response, and it’s an exciting time for people who appreciate the culinary delights of the Orient.

Some restaurant owners are responding to current trends, but one that recently opened had been ahead of the curve when they first had the idea. Dash Dashi originally planned on opening in early 2019, but was held up with endless permit problems. The remodeling and paperwork of the former Mama D’s on Manhattan Avenue, in downtown Manhattan, was finally done in December of last year, and they’ve had a few months to get it running smoothly.

I have visited twice, once on their dining deck and once inside where we could admire the nicely decorated interior. The clever design makes diners feel they are in a stylized underwater landscape with schools of sculptured fish over wave textured paneling, and the effect is striking. The tables are a bit closer together than is ideal, but it’s still a pleasant place to dine.

Classic sushi items and some standards like teriyaki and tempura are offered, but from what we saw around us most people are ordering sushi rolls and featured specialties, many of which have distinctive presentations. We ordered a mixed tempura starter and sunomono salad to see how the standard items were executed, and explored their original creations the rest of the time. The tempura was very good with almost magically crisp batter, the sunomono a twist on the usual sweet cucumbers drowned in sweet vinegar. The dressing was used sparingly with a bit more salt than usual, and the cucumber was in larger chunks, so that the natural taste came through. It was a successful variation on an item that’s usually taken for granted as a palate cleanser. 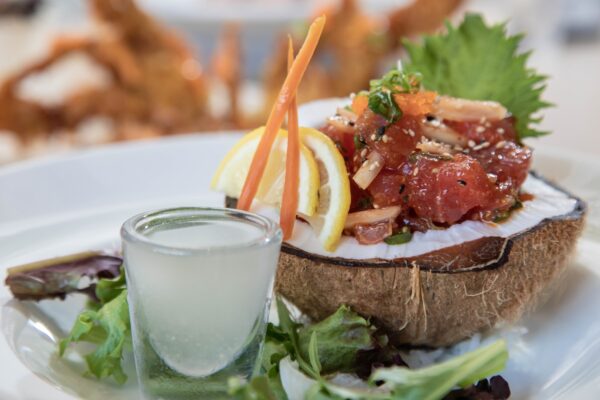 The CoCo Poke is a pretty presentation for the Hawaiian classic. Photo by JP Cordero.

We ordered an original item listed as an appetizer that was partially successful, the CoCo Poke. This is tuna poke with onion, cucumber, seaweed, and truffle oil served in a coconut shell, with coconut milk on the side. It was suggested that the coconut milk be drunk as a shot after eating the fish, but I tried this and didn’t find it a particularly compelling combination. We tried eating some of the coconut meat, but only the meat from relatively young coconuts is soft enough to easily scoop from the shell. Older coconuts like this one have meat that is edible but very difficult to remove, and no tools were provided for the job. We tried scraping some of the meat inside of the shell, but gave up after a few minutes because other items were arriving at the table. The flavor of the fish is good and it’s a pretty presentation, but it’s a novelty rather than something I’d order again. 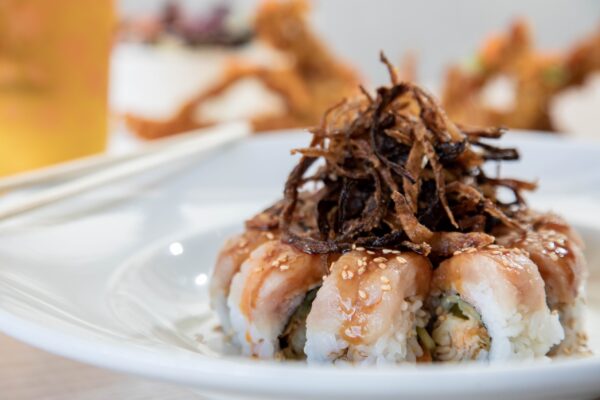 Every time a Hedgehog Rolling is delivered to a table, the cameras come out. Photo by JP Cordero.

I would order all three of the sushi rolls we tried, the Hulk, Hedgehog Rolling, and Hot Wave. The Hot Wave was a spicy tuna roll with cucumber topped with avocado, a dash of hot chili oil, jalapeño, and a spicy cream and sweet eel sauce. Everyone but the most diehard sushi purist accepts the idea of spicy sushi these days, but this was particularly well done with several hot flavors nicely balanced. The Hulk was grilled eel, shrimp tempura, and cucumber topped with surimi, avocado, eel sauce, and tempura flakes, and it was an enjoyable, and successful mix of textures and flavors. I do wish they had taken the tails off of the shrimp before frying them so that you didn’t end up chewing on them, but that’s a minor quibble.

The stand-out sushi roll was also the one with the most unusual presentation, the Hedgehog Rolling. This was a fresh albacore roll with whitefish tempura, pickled jalapeño, and cucumber that was set so that cut pieces of roll were in a circle. This was garnished with some spicy sauce and chili oil and topped with crispy onions so that it looked vaguely like a spiky hedgehog. The flavor was outstanding, and everyone at the table had to get pictures. Even someone from a neighboring table got a picture and asked what it was.

Only four entrées are offered, black cod filet, super stuffed crab, 3 Sea Musketeers casserole, and “thrill on the grill” Cajun salmon. The Cajun salmon was timidly spiced compared to almost anything made by a real Cajun, but was greatly enhanced by the lemon and mango salsa and a bed of sweet soy sauce. The tart and fruity flavors worked nicely together, and it was even better with a dip of the house sauce that appears to have some mayo and sesame oil with soy. The Three Sea musketeers was an oddity, crab, shrimp, and scallop pan fried and then baked in the manner of the popular “dynamite” casserole. Dynamite sauce has a tanginess from the use of fish eggs, but those were not present in the creamy sauce used here. I couldn’t help but make the comparison with this milder version, and of the two I preferred dynamite. It needed a little something to make it stand out and provide a contrast to the rich creaminess of seafood, and it wasn’t there.

The standouts, though, were the other two entrées. Black cod has a very buttery texture when cooked, and miso sauce gives a smooth caramelized sweetness that suits it very well. It’s a dish that many Japanese restaurants have and that I never get tired of, and they do it very well here. 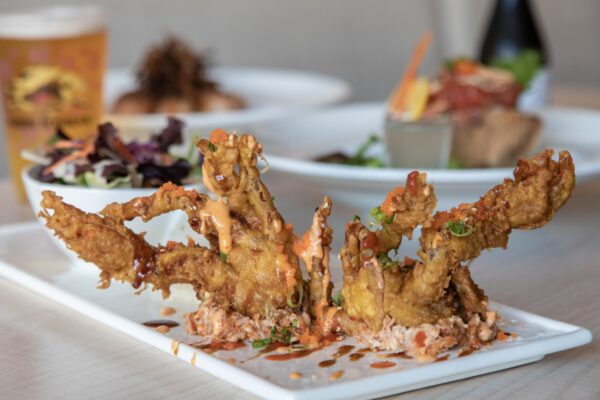 The super stuffed soft shell crab is a successful combination of Thai and Japanese ideas. Photo by JP Cordero.

I have never been to a Japanese restaurant that had anything like the super stuffed crab, though. This is a soft-shell crab that is stuffed with crab meat and spices, coated with a very mild Thai curry, and deep-fried. After frying, it is cut in half and served with the cut side down, so that claws and legs stick up like antennae. It’s an arresting presentation for the unique and excellent item, and if you like crab at all, I highly recommend it.

The drinks at Dash Dashi are not as creative as the food, with beer, wine, sake, and three fairly standard cocktails based on shochu and sake. I would like to see someone in the South Bay showing off what a creative bartender can do with these liquors, and hope they will try this in the future.

The service was variable, excellent on one visit when we sat indoors, surprisingly careless when we dined outdoors. I know everyone is having trouble finding and keeping good people, and they already have some, but they need to work with others, and watch to see what they are doing.

Dash Dashi is still a work in progress, but there are enough positive signs to be optimistic that they’ll be a fixture in the Manhattan Beach scene. There is no shortage of people here who enjoy this style of cuisine.

for more restaurant reviews check out our dining guide at easyreadernews.com