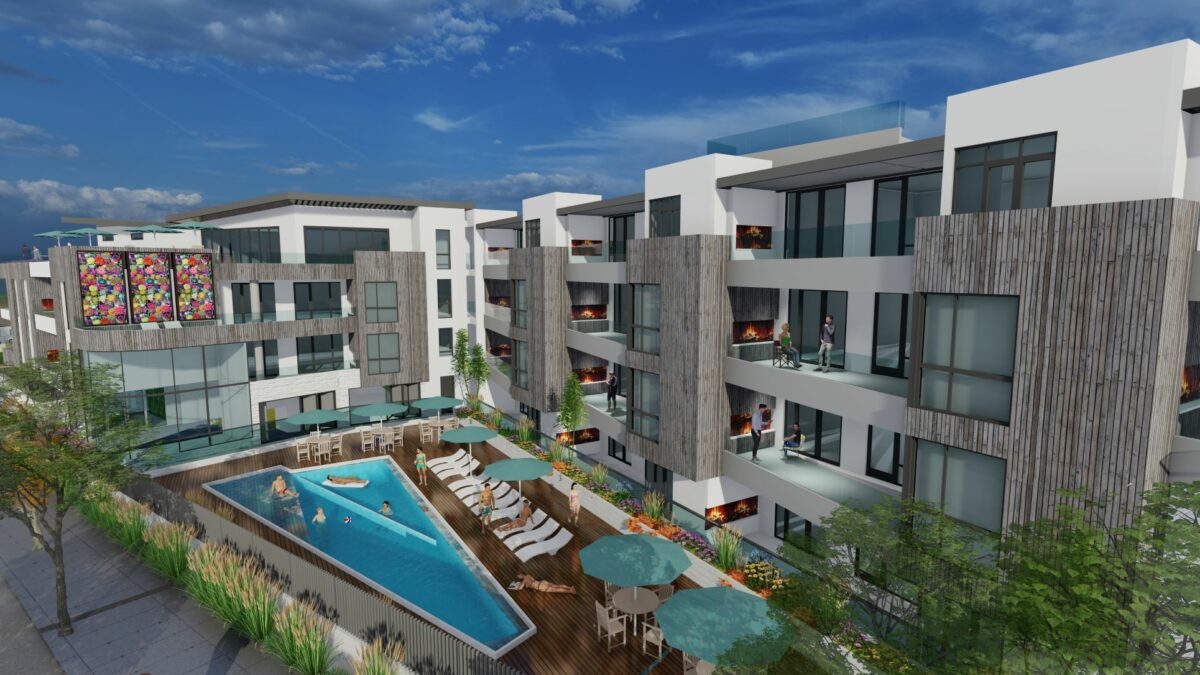 Project Verandas rendering by the developer.

The expected legal storm resulting from the Manhattan Beach City Council’s rejection of Project Verandas has arrived. The developer has filed a lawsuit, while the State of California’s housing agency, and three non-profit pro-housing organizations have demanded the council rescind its rejection or face legal consequences.

The City Council scheduled a special closed session prior to Tuesday night’s regularly scheduled meeting to discuss the matter. Council gave no indication afterwards what direction it would pursue. City Attorney Quinn Barrow, through a City spokesperson, said that Project Verandas would again be discussed in closed session December 20.

The first of what is likely to be multiple lawsuits against the City regarding Project Verandas was filed in early November by the developer, Highrose El Porto LLC. The suit alleges the City broke state laws and violated the developer’s property rights in what amounted to a taking of the property through inverse condemnation. It seeks to force the Council to either approve the project or pay an estimated $52 million in damages, in addition to legal fees.

“Governing bodies of cities, and counties are charged with the responsibility of faithfully executing the laws of the United States, and the State of California; they are not ‘fiefdoms unto their own,’” the lawsuit said, referencing a legal precedent. “In this case, the City ran roughshod over the Rule of Law, and violated the constitutional rights of a private property owner/developer, who only seeks to follow the very rules the City clearly set out for it.”

The State of California’s Department of Housing and Community Development (HCD) sent a letter to City Manager Bruce Moe on November 28 that said the agency had monitored the City Council’s deliberations, and analyzed the council’s rationale for rejection. The letter said the rejection was a clear violation of both the Housing Accountability Act (HAA), and the State Density Bonus Law, and gave the City 30 days to respond before the case is referred to the California Attorney General’s office.

“The City’s response should include, at a minimum, a specific plan and timeline for corrective action, including (1) the repeal of the City’s resolution denying the Project, and (2) the reconsideration, and approval of the Project as proposed,” the letter said.

A letter from three non-profit organizations last month also urges the City to move forward with the project. The letter, from Californians for Home Ownership, YIMBY Law, and the California Renters Legal Advocacy, and Education Fund (CaRLA), says the organizations are “devoted to using impact litigation to address California’s housing crisis,” and notes that the HAA specifically grants them standing to sue cities who defy the law, and the right to recoup legal fees from those cities.

“In recent litigation against the City of Huntington Beach, the City was forced to pay Californians for Homeownership, CaRLA, and the applicant $600,000 in attorneys’ fees after being ordered to approve the project at issue there,” the letter says. “Huntington Beach, like Manhattan Beach, based its rejection on illegitimate, pretextual health and safety concerns.”

The Housing Accountability Act was originally enacted in 1982 and was repeatedly amended by the state legislature in recent years to give more teeth to enforcement mechanisms against cities who attempt to defy state housing requirements. Those new enforcement mechanisms first came to bear in 2018 when the City of San Mateo rejected a 10-unit housing project, even though it met all objective standards set forth by the City. CaRLA sued San Mateo. A state appeals court ruled against the City, and upheld the constitutionality of the HAA. In doing so, the court referred to the state’s housing crisis, in which California is projected to be 3.5 million housing units short of its needs, and emphasized the importance that legislative requirements be met by cities.

“The HAA is strong medicine precisely because the Legislature has diagnosed a sick patient,” the decision said.

San Mateo spent over $1 million defending itself, including $450,000 in attorneys fees for CaRLA.

The council, after three months of deliberations, sided with a resident-led opposition movement in a 3-2 vote on October 18 that rejected the 79-unit apartment complex proposed on Rosecrans just above Highland Avenue. The action went against staff recommendations and Planning Commission approval, both of which were based on Project Veranda’s eligibility under state law for non-discretionary, ministerial approval due to its inclusion of six low-income housing units.

The Highrose lawsuit, the state’s housing agency, and the non-profit litigators were all focused on the rationale Mayor Steve Napolitano gave in casting the deciding vote to reject the project. He discussed AB 2011, a state law passed in September that resident opposition cited as a reason to reject the Project Verandas. AB 2011 is intended to streamline approval for affordable housing projects on commercially-zoned lands as long as the projects meet affordability and environmental criteria. Among that criteria is such projects cannot be within 3,200 feet of oil refineries. Project Verandas, located on the former site of the Verandas event facility and the current Tradewinds office building, is within 3,200 feet of El Segundo’s Chevron refinery.

Napolitano said that the new law was not directly applicable to Project Verandas since it does not go into effect until next year. But he argued the underlying basis of AB 2011’s sections regarding keeping housing from refineries was relevant to Project Verandas.

“And for that reason, I incorporate the entirety of the legislative record for AB 2011 into my decision, as well as the court decisions and other studies that support the idea that allowing people to dwell adjacent to known sources of extraordinary pollution, especially air pollution, is a specific adverse impact that must be mitigated by extended buffer zones,” Napolitano said. “It’s no accident that AB 2011 talked about 500 feet setbacks from freeways or 3,200 feet from refineries. There are studies that support this.”

“So contrary to the conclusion of the developers’ environmental site assessments that the Chevron site does not represent a significant environmental concern, substantial evidence has existed for years that Chevron is a major polluter for our region,” Napolitano said. “I highly doubt the current housing that exists so near to Chevron would be built there today given the specific adverse impacts of the known pollution generated there. And for that reason, additional housing near Chevron should be avoided, as the risks cannot be mitigated.”

The developer’s lawsuit described Napolitano’s use of legislative record as “ill-conceived —  if not peculiar…” while one of the non-profits, CaRLA, actually sent a representative to City Hall on October 25, requesting to see the records Napolitano had cited in his rationale for rejecting the project. According the CaRLA, the only record the City Clerk was able to produce was the City’s Project Verandas web page, which after the October 18 meeting had been updated to include links to AB 2011 and another new state law, SB 1137, which requires 3,200 ft. buffer zones between new homes and oil fields and wells.

The non-profits, who have given the City until December 9 to respond to their letter before filing suit, argued that neither law is yet in effect and would likely not be applicable anyway.

“These bills do not prohibit the placement of housing within a certain radius of refineries, nor do they contain any statements or findings that locating housing near refineries is a health and safety hazard,” their letter states. “AB 2011 simply says that housing within 3,200 feet of a refinery is ineligible for that bill’s state created ministerial approval process…This post-hoc attempt to justify a clear violation of state law by using laws that do not apply and are not even in effect yet demonstrates that the City’s denial was in bad faith.”

The developer’s lawsuit, filed by attorneys from the Newmeyer and Dillon law firm, likewise accuses the City of acting in bad faith, both because its actions allegedly flouted its own municipal codes, housing element, and General Plan, and because council members stated opposition in some cases months before the actual vote to reject Project Verandas.

“This case highlights the continuing struggle between the legislatively declared critical statewide need for affordable housing, on the one hand, and mobilized, anti-development NIMBYs (Not in My Backyard) on the other, who lobby, and cajole their elected officials into stopping further development in their communities at any cost —  even if denial violates local and state law, and even where the City and its constituents have already identified the property for future housing projects at the same density, such as the Project at the center of this action,” the lawsuit argues.

“This case further highlights the disparity and clash between state legislators who continually have to enact new housing laws and adopt increasingly urgent legislative declarations, and directives, only for local government officials to make nakedly political decisions to willfully and unlawfully ignore them.” ER