Dockweiler RV park in El Segundo awaits use as coronavirus quarantine site as LA County prepares for up to 2,000 new cases a day 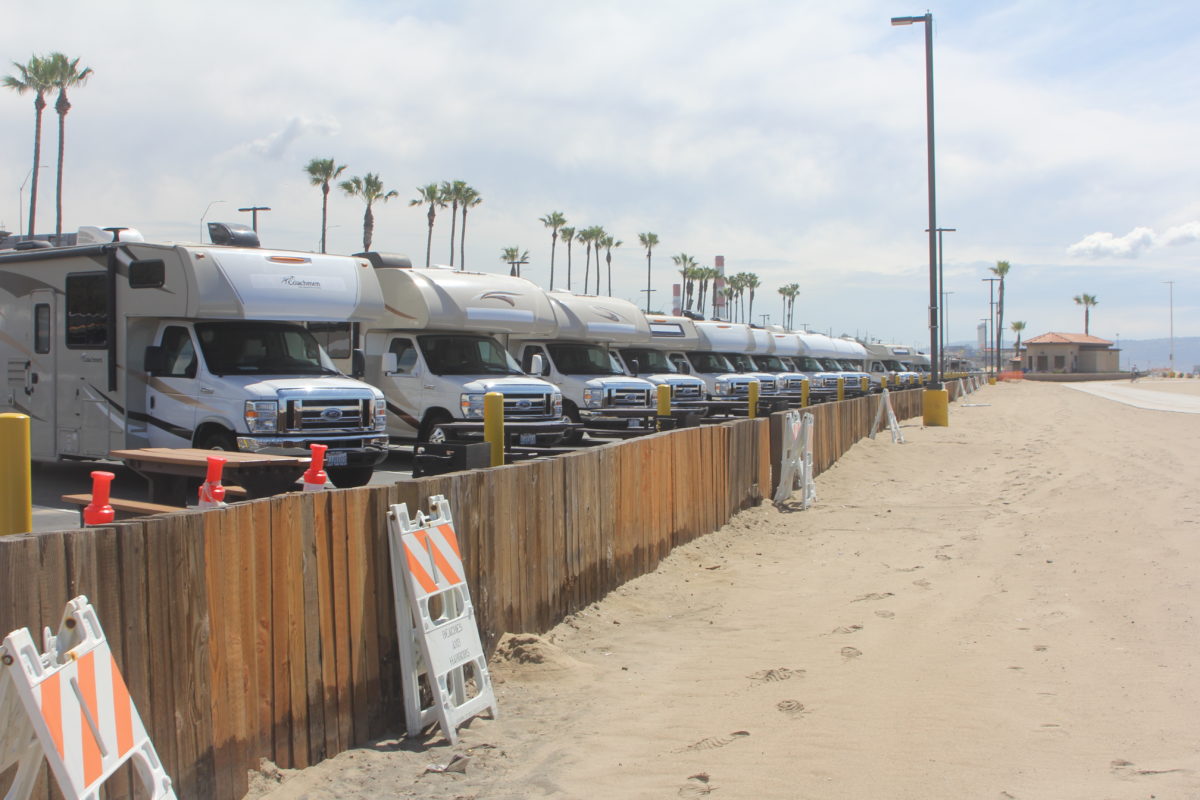 Dozens of LA County-owned RVs await possible use for quarantine. The RV park at Dockweiler Beach was closed to public use last week. Photo by Mark McDermott

The County of Los Angeles last week closed the Dockweiler Beach RV park for possible use as a novel coronavirus quarantine area.

Notices were passed out to current residents of the RV Park on March 13. According to Fox News 11, which first reported on the closure, the notice said that current reservations would be canceled “due to the need for emergency shelter related to the COVID-19 virus.”

“Please be assured that the Department of Beaches and Harbors will refund fees related to the cancellation of your stay here,” the notice stated.

Dockweiler Beach and the adjacent RV park are within the jurisdiction and control of LA County. El Segundo officials were informed of the plan.

“LA County Supervisor Janice Hahn and her Office of Emergency Management were in contact before they began closing the Dockweiler RV Park for its regular use,” said El Segundo Mayor Drew Boyles. “The City of El Segundo has been made aware of their plans for housing quarantined or isolated people in RVs at Dockweiler as well as the wraparound services, including security, medical, food, prescription services at the facility. Our public safety and city officials are aware and precautions are in place.”

A statement released by El Segundo asked residents to stay clear of the RV park. “This is an emergency action that Los Angeles County is taking to comply with the Department of Public Health’s orders to keep the entire County safe,” the statement said. “Please avoid this area until further notice.”

As of Wednesday, the Dockweiler RV park was filled to capacity with County RVs, but had no people under quarantine.

Hahn, who is herself self-isolated at home because she is over 65, said the expectation is that Dockweiler will be used to house people who would otherwise not be able to self-isolate.

“This virus is spreading quickly and a lot of people need to be isolated from the public and even from their families,” Hahn said. “We are using the Dockweiler RV Park as housing for these individuals and we are identifying more sites like it for quarantine and isolation across the county.”

Kevin McGowan, director of the Office of Emergency Management for the County of Los Angeles, said at a press conference Monday that the housing at Dockweiler is part of a countywide preparation.

“As we continue to see cases increase, we also see the need to provide additional supportive housing for individuals that may not be able to quarantine or isolate in their own residence,” McGowan said. “So the county is looking at this problem as a humanitarian mission. We are working to coordinate with our local jurisdictions to ensure that we have housing options available that are equitably distributed throughout the entire county, so that no one area is being displaced to too many other areas.”

“This supportive housing is going to be comprised of a variety of different options,” McGowan said. “Most notably we have set up some supportive housing at Dockweiler Beach, and this includes recreational vehicles, but that is just one strategy of many. Other strategies include hotels, where we will lease entire facilities to ensure we have the capacity and the things in place that we need to support people who are either quarantined or isolated and displaced by this particular emergency.”

On Friday, Los Angeles County Supervisor Hilda Solis announced the procurement of a second site — in addition to Dockweiler, the County has reached an agreement to lease the  Sheraton Fairplex Hotel in Pomona, which has 244 rooms.

“Essential services will be provided to these individuals during their stay, including food, medical care, laundry services and more,” Solis said.

McGowan said more sites would soon be announced and asked the public to stay clear of those areas.

Although LA County as of Friday had only 292 confirmed cases of COVID-19, Public Health Director Barbara Ferrer said that a spike of cases is expected. She said the County is preparing for numbers similar to New York City, which has a population of 8 million and is reporting as many as 2,000 new cases a day.  LA County has a population of 10 million people.

“My team is preparing for management of a situation where we too might see 2,000 in one day,” Ferrer said.

Although the Dockweiler site is not specifically dedicated for the homeless population to isolate, County officials hope to house anyone without shelter. At Monday’s press conference, Dr. Barbara Ferrer, the director of the Los Angeles County Public Health Department, said the homeless population was already highly at risk before coronavirus. She described a recent study of LA’s homeless population as containing “devastating mortality data,” revealing a life expectancy 20 to 30 years less than average.

“These are highly vulnerable people,” Ferrer said. “We need to especially pay attention to people who are unsheltered and have underlying health conditions. Our aim is to try as much as possible to find a place for people to go in and get shelter.”

County officials said that through Tuesday no homeless people had tested positive for coronavirus, though few had actually been tested. The County also moved to keep its “winter shelter” facility for homeless people open through June and is providing transportation for anyone homeless who is not symptomatic of COVID-19. In Los Angeles, Mayor Eric Garcetti announced Wednesday that the city will utilize 42 of its recreation centers to house the homeless, providing 6,000 beds. The County’s homeless population is 60,000. Locally, Harbor Interfaith, the agency charged with homeless outreach by Manhattan Beach’s recently adopted homelessness plan, is operating as normal. Due to social distancing requirements, the homeless feedings at Redondo Beach churches have been suspended.

Manhattan Beach Mayor Richard Montgomery said the County’s use of Dockweiler was a good move in terms of containing the spread of coronavirus and protecting public health.

“I understand what the move is about and I’m not concerned by it,” Montgomery said. “The County is using its best options to keep [sick] people confined. It’s not like they are going to take a walk on the beach and head down south. It’s not like a vacation; they will be confined, and we will try to get this virus over with. So I applaud the move.”