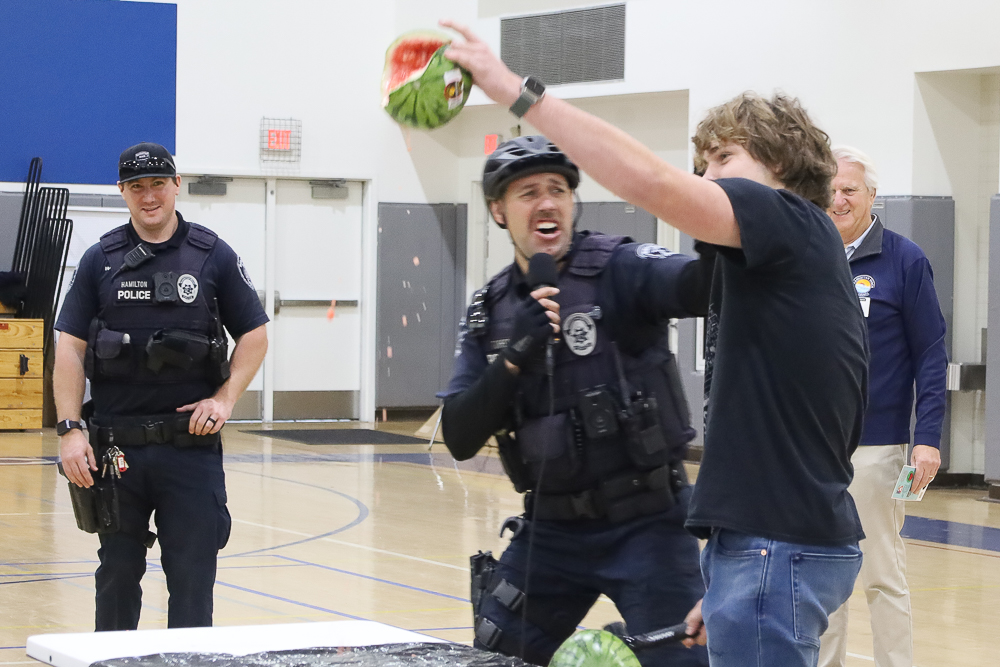 “Waves of the future,” the motto painted  above the Manhattan Beach Middle School quad, applies even to the way the 1,300 students get to school. An estimated 90 percent ride e-bikes.

Because of e-bike speeds of up to 28 miles per hour, they are considered more dangerous than pedal bikes. But rather than fight the trend, Manhattan Beach schools are holding assemblies to encourage students to ride e-bikes safely.

Hamilton mentioned obvious legal requirements, such as wearing helmets, riding one to an e-bike, and not riding on sidewalks. He also gave less obvious advice, such as do ride on sidewalks along high traffic streets, such as Sepulveda Boulevard. Hamilton cautioned that State legislation has been discussed that would deny auto licenses to e-bike riders who have racked up multiple moving violations.

Officer Torres borrowed a page from the late, great comedian Gallagher, to impress on the students the reason for wearing a helmet.

Gallagher famously closed his comedy act by taking a large wooden mallet to a watermelon. Fans would bring Saran wrap to his shows to use as shields against the exploding watermelon.

Torres placed a hammer next to two watermelons on a table in the MBMS gymnasium. One watermelon was protected by a bike helmet, the other wasn’t.

He invited a student volunteer to take a hammer to the watermelon with a helmet.

The hammer bounced off the helmet.

Then he asked the student to take the hammer to the watermelon without a helmet.

Again the hammer bounced back, leaving the melon undamaged. The hammer was significantly smaller than the Gallagher’s wooden mallet.

But after two more swings of the hammer, the melon exploded; and like the audiences at Gallagher’s shows, the students exploded in laughter. The lesson about wearing a bike helmet was hammered into the MBMC students’ collective memory

Franklin spoke to the students about the ABC’s of cycling: Air, Brakes, Chain. All three need to be inspected prior to riding, he said.

Manhattan Beach police have two Bulls Sentinel e-bikes for patrol, and have four more scheduled for delivery. The Class-3 e-bikes are equipped with flashing lights and sirens, and are capable of 28 mph.

Torres said the e-bikes are more suitable for community policing than patrol cars, and motorcycles because they are safer to ride in pedestrian areas, and make public interaction easier. ER