El Tarasco goes a upscale, but not too much 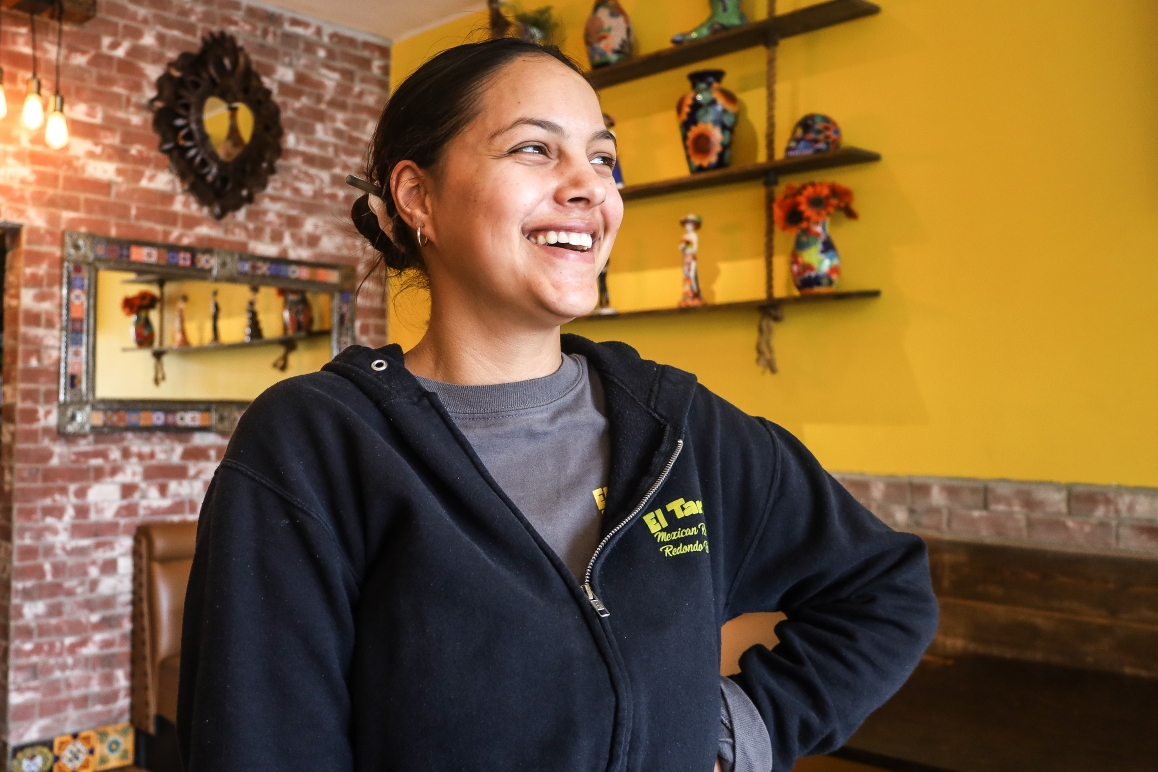 When I was a kid growing up in Manhattan Beach, I frequented two Mexican restaurants: the Red Onion when my parents were paying, and El Tarasco when it was on my dime. Since our family didn’t have a lot of money, I ate at El Tarasco a lot. My friends and I would ride our bicycles over to the shack near the beach on Rosecrans, get it to go and take it to the nearby Sand Dunes Park. It was quieter, and more relaxed than the noisy little restaurant, where the phone rang incessantly for takeout orders, and waiting diners elbowed for the seats at the counter.

We finished it all even though the portions were gigantic. The food wasn’t beautifully presented, but it was flavorful, and the sauces, and salsa had a kick. It’s where I learned to like guacamole, dipping chip after chip from the oil-stained brown paper bag between bites of their legendary super deluxe burrito.

After I was old enough to drive, my options for Mexican food widened, but I still stopped back at the Tarasco on Rosecrans, and eventually the ones in El Segundo and Redondo, which offered the same food in a nicer atmosphere. That made sense, because a family-owned place that serves inexpensive and good Mexican food will never go out of style. That same pattern was what I expected when I stopped into the relatively new location in Hermosa.

Instead, the new menu stopped me in my tracks. It included not only modern items, but seafood. There was aguachile, ceviche, shrimp cocktails, 7 seas soup, whole fish, and something called salmon Michoacan. I had stopped by with my order already planned because I thought I knew the menu, but I changed it up for aguachile, and a shrimp taco. The taco was decent but standard, the aguachile a surprise because they had kicked up the seasoning several notches. The marinated fish was very citrusy with lots of jalapeno. I needed several cooling drinks from my sangria to bring down the heat. Sangria? Oh yes, this El Tarasco has a beer and wine license, something unimaginable to someone used to the little lunch counter on Rosecrans.

I have visited several times since then, and can report that the standard items are as well done as ever. The carnitas tostada is my favorite item, a mountain of food with plenty of different textures, the meat tender with occasional crusty bits that have more flavor thanks to the coating of spices. It’s a little salty, but that’s okay. The super deluxe burrito is still super and deluxe – it’s rare that my wife finishes even a junior deluxe burrito in a single sitting. I do, but it usually requires a siesta afterward. The taquitos are the old school style that are pan-fried rather than deep fried, which people who are used to the deep fried rolled version find polarizing. El Tarasco serves taquitos the way they were made back when they were invented (either at San Diego’s El Indio in 1940, or slightly earlier at Cielito Lindo on Olvera Street, depending on who you believe). I like the crunch of the modern variety but find the filling is often jerky when fried, while it’s more moist, and more flavorful in the original version.

The only new item I wasn’t much of a fan of were their tamales, since by default those are served wet with sauce and topped with cheese. Those flavors overwhelmed the masa and beef in the tamale, and next time I’ll know to ask for it to be left unsauced. 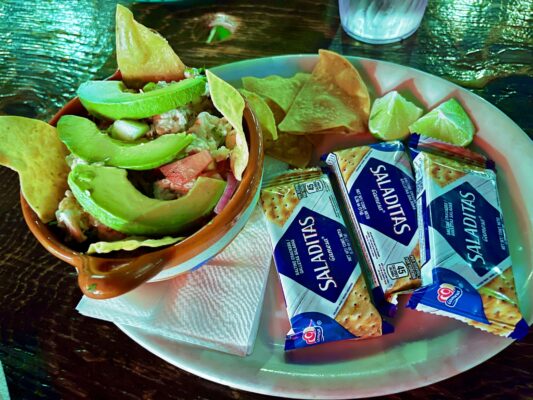 A serving of ceviche at the El Tarasco in Hermosa. Photo by Richard Foss

I haven’t tried all of the seafood items at El Tarasco Hermosa, but so far have enjoyed all I have tried, to varying degrees. The shrimp ceviche isn’t as spicy as the aguachile that I tried on my first visit (though a server told me that they’ve toned that item down a bit because some people found it too spicy). Instead the shrimp, citrus, and spice have a better balance, though you’ll probably still appreciate a bite of the slices of avocado every few bites.

The oddest item was the salmon Michoacan, which is obviously a fusion dish because salmon don’t live within hundreds of miles of that Mexican state, and never have. They do have marlin, tuna, amberjack, bass, and a variety of other species, but all are more expensive and less available all year than salmon, so the substitution makes sense. The fish is coated with soy sauce, garlic, ginger, and chili before being grilled, which is not as alien to Mexican tradition as it sounds. In the late 1800s, tens of thousands of Chinese railroad workers fled discrimination in the USA for Mexico, and they and their descendants added an Asian flair to some Mexican preparations. It’s Asian-Mexican fusion rather than Asian-American, but the difference is subtle. The sauce crust on the fish had caramelized and was slightly crisp. The menu states that this is served with rice and snow peas, but on the day I was there they were out of peas so it came with salad. The salmon was interesting but not essential, though it would be a great option for a party where one person prefers Asian to Mexican food. I’m more likely to try their other seafood items rather than have this again.

The wine and beer list are short but cover the bases. I recommend the sangria, which has mild flavors of spices and fruit along with the wine. They also have standard American and Mexican soft drinks and beer, plus good homemade lemonade. Churros, flan, and ice cream are offered for dessert, and someday I’m going to try them, but the entree portions here are as generous as ever and I haven’t had room so far.

The El Tarasco in Hermosa is a step up in style, but retains all the virtues of the original. It’s modestly priced with some big meals around $10 bucks, and service is with a smile. A family member manages the place and keeps everything humming along with pride, the third generation at this restaurant that was founded in 1965. New branches are popping up around the South Bay – they’re open in Inglewood, and one will open on Artesia in Redondo soon. The family has made a success, one big burrito at a time.