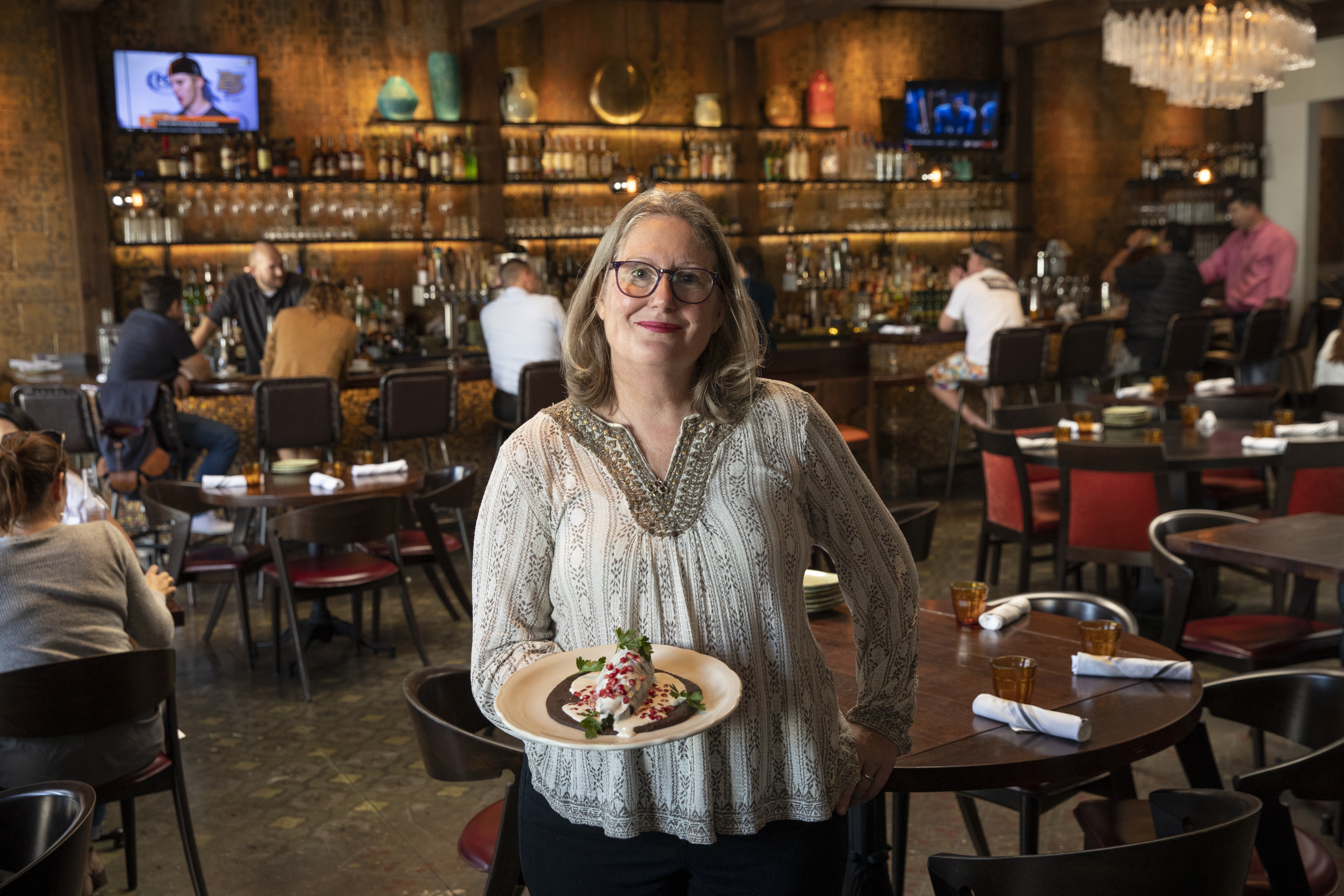 Some people’s career path resembles a seismometer readout during a major earthquake. Sausal Restaurant chef and owner Anne Conness qualifies as one of those. She was successful at several different things before following her passion into the culinary industry, where she has pioneered some remarkably diverse dining experiences.

Her passion for all things culinary comes from her father, who was a “foodie” long before that name was invented.

“My father loved ethnic food and exploring the city. When I was little I remember going to this Basque restaurant where we ate at picnic tables. We’d go for unusual Mexican and Chinese food, Vietnamese — I was just exposed to so many things,”

Cooking professionally wasn’t on her radar then, though, and she took a while to get there.

“I never intended to be a chef. I was an English major and wanted to write novels, but I didn’t know how to get started, and I guess I didn’t have the discipline to do it. Now I only write training manuals and marketing stuff.”

Conness moved to New York to become an artist, specializing in abstract work. A day job painting movie sets led to job offers in Los Angeles, where she painted sets for TV shows and then started doing other work in the industry. This included producing short music pieces for an animated character named Michigan J. Frog. She also put her writing talents to work, not in scripts but promoting various shows. Then, feeling that something was missing in her life, she decided to take another career turn.

“I was working for the WB Network producing promo material, and one day I asked myself, ‘What am I doing? This isn’t my passion at all.’ I decided that I still loved food, so I went to chef’s school. Everyone thought I was crazy to leave a good job. At my first cooking opportunity I made $8 an hour as a prep cook at Chinois on Main. It practically killed me, I was so bad. I’d go home at night with all these cuts on my hand, sobbing, I can’t do this.”

Sausal tamale topped with crema and pomegranate seeds over beans.

One day she met Mike Simmis, who was to be quite important in her life. He was looking for a chef for a restaurant he was building in called Tin Roof Bistro. Anne signed on as chef-partner and started developing a menu inspired by Napa Valley dining, but construction on the building, in the Manhattan Beach Village Mall, was delayed due to permit problems. Simms took advantage of the delay by asking Anne to develop the menu at another restaurant he was launching, an upscale burger and beer spot called Simmzy’s. Anne was initially unenthusiastic about the idea, but she warmed to the challenge.

“I wanted to offer familiar foods but make them the best that they could be. I made a lot of burgers changing only one thing about each – it’s called ‘cuttings’ in the industry. I learned about compaction ratios when making patties, the mix of meats and how that affects the flavor and the grilling. And that’s just the patty component. I tried them on all different buns, because the bun is essential, and settled on a pain de mie roll. Then it came to what else was on there. At the time people were going nuts over bacon compote with balsamic and arugula, and I thought, what’s my answer to that? You need the vinegar, you need some sweetness, you need something crunchy, so as my family was from the South I thought of onion chow-chow.”

Putting that rather obscure type of pickle on the burgers may have thrown some people, but it gave the burgers a distinctive flavor that was a key to Simmzy’s success. The restaurant in downtown Manhattan beach boomed from day one. Then it was time to get to work on Tin Roof.

“It had to have something for everyone, from diners on a budget to full-on date night. The pizza made families feel comfortable. The go-to dishes were short ribs, pasta, pizza, and I made a lamb Bolognese that’s still on the menu. That’s unusual because I left there for five years, and generally new chefs want to make a place their own.”

Tin Roof’s wine country focus was a hit, but the time creating the menu for Simmzy’s had given her an interest in other beverages. She became a certified cicerone, the beer equivalent of a sommelier, and one day had a revelation.

“I was thinking about brewpubs and realized that every craft beer place I could think of was burger-focused. I thought, wait a minute, we’re in California and Mexican food is our soul food, so why isn’t there a craft beer bar that serves Mexican food? The was the beginning of Sausal. I pitched the idea to Mike Simms, and he thought it was a great concept, but he wanted me to open up three more Simmzy’s first. After a while I said to Mike, ‘I’m not getting any younger, and I really want to do this.’ He said OK, and we figured out how to unwind our partnership so I could start this new thing. He knew that was my dream and didn’t want to stand in the way.”

She found the perfect spot on Main Street in El Segundo, and a conversation with a friend led to a refinement of the concept.

“I told her I wanted to do Mexican food but my way, and I didn’t know how to frame it. She immediately said, ‘Alta California. You gotta look backward to go forward.’ I told her the address and she pulled out a map of the ranchos, and we found that this was part of Rancho Sausal Redondo. I had a name, I found some books about the historical food, and I got really inspired. It all led to what it is right now.”

California cooking before the American takeover in 1846 was related to Spain and Mexico, but different in many details. Among other things, Alta California was the cattle ranch for the Spanish empire in the New World, and they developed a variety of long-simmered beef specialties. Grapes grew here well, too, so they created wine sauces that are unknown in Mexico. Since Sausal opened in 2015 most diners have been delighted with the unique flavors, but some have been confused. The same was true for the back of the house. Conness had to show a largely Hispanic team how to make a variant on their own cuisine that they didn’t know existed.

“I’ll give you an example… For my picadillo I braised oxtail for hours in wine and vegetables, and after it was finished I strained it and had all this wonderful jus left over. My sous chef at the time was making a red mole, and I tasted it and said, ‘It’s good but it needs something.’ He said ‘No, it’s perfect, that’s how we make it.’ I told him to add some of the braising jus, and he said no, that will ruin it. I insisted, and it came together with this smooth body, and the braising juice gave it a bottom note. After all the other guys left and nobody could overhear, he said, ‘Chef. I think I’m going to learn a lot from you.”

Meanwhile, Conness was getting interested in a completely unrelated cuisine.

“In 2010, I went to a food conference in the Napa Valley, and I kept being drawn to chefs from the Middle East. What they were doing was at once familiar and exotic, using these spice blends… I learned so much from these Turkish guys. Then I met an Israeli chef named Alon Shaya who had a couple restaurants in New Orleans, and I wondered, how come people don’t know about this? I read Yotam Ottolenghi’s book on the subject and though I rarely connect with cookbooks, I wanted to make everything in it. I never thought I would cook in that style, at least professionally, but I did at home.

“Then one of my business partners said, I have a property on Third Street in LA, you want to open another Sausal? I looked and there were two upscale Mexican restaurants within three blocks, and I didn’t want to go against that. So I thought for a while, and I said, yes, but it will be modern Israeli. My partner, who is Jewish, said, ‘Wait, you’re not Jewish,’ and I said, ‘I know, but I love the food.’ I went to Israel and learned a lot there, and I came back from that trip inspired.”

The new restaurant is called Jaffa, and like Sausal there was some cultural dissonance at the front and back of the house.

“Every one of my cooks is Jewish, and we’re teaching them new things. Luckily they’re flexible and open-minded about food. What makes modern Israeli cuisine different from, say, Lebanese cuisine is that people came from everywhere at the founding of the state, and they all brought their variations from Eastern Europe, Spain, the US, India, you name it. It has made the Israeli dining scene exciting, because they’re willing to use everything from a worldwide culture.”

Israeli diners almost always ask, ‘You’re not from Israel, and you’re not Jewish?’ I tell them no, but I’d love to spend time there and learn more. They say, we will make you honorary Jewish, and they give me a hug.”

After opening one restaurant resurrecting a lost cuisine, and another reinterpreting a cuisine that is evolving, it seemed worthwhile to ask whether she had created any cross-fertilizations of the two. Had she tried adding labneh cheese to a burrito, or crossed a felafel and a tamale? She laughed and said that might be too eclectic even for her, but then expressed her continuing commitment to experimenting.

“When I love a cuisine I’m all in. Every day I learn something new in the kitchen. It’s a passion project, and I still have the passion.”

Running two restaurants is so exhausting that Conness cherishes the time she can enjoy non-culinary activities such as working the New York Times crossword puzzle. She is careful to keep aside time to be with her wife Terri and their children.

“Luckily Terri has been in the restaurant business and understands what it’s like. Sometimes she’ll go to an event for me when I’m too tired so I can spend extra time at home with the boys. My older son is into computers, and my younger son is really musical, but neither has any interest in running restaurants.”

Perhaps they don’t. But then again, as a teenager neither did she.