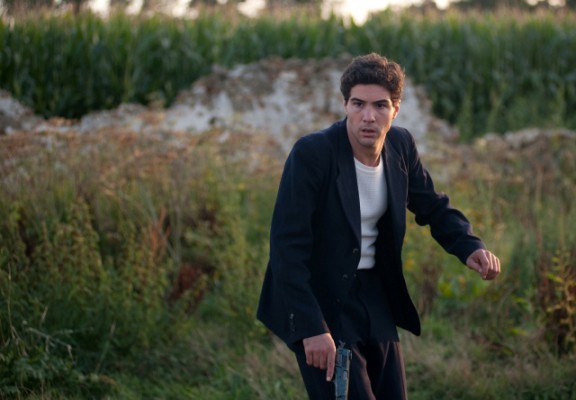 “Free Men,” a thoughtful and thought-provoking film about an underground resistance movement centered within the Paris Mosque during the Nazi occupation brings to light surprising true events and characters seemingly ignored by history.

Younes, a directionless Algerian immigrant, makes his living on the fringes of the black market during that dangerous time when the Nazis were putting their “final solution” into high gear and the Vichy government was “repatriating” North African immigrants as undesirables. Arrested, the police officer gives him a choice: he can be deported back to Algiers or he can spy on the Mosque, which the police suspect is harboring communists and supplying false papers to Jews. Younes, whose only morality involves his mortality, accepts the latter.

What Younes discovers at the Mosque changes his life. He discovers his beloved cousin, missing for many weeks, living in the basement of the Mosque as part of a clandestine group of resistance fighters. He is also introduced to Salim, the protégé of Si Kaddour Ben Ghabrit, the rector of the Mosque. Salim, the rector exclaims, has the most beautiful singing voice in the Arab world and will be justifiable famous after the war. What the rector is hiding about Salim, however, is enough to get everyone arrested and worse, for Salim is actually a Jew. It is his discovery of Salim’s hidden identity that is the turning point in Younes’ life, for rather than turn him in to the authorities, he does everything he can to protect him, the underground resistance and the rector, for the rector, as it turns out, was always aware that Younes had been sent to spy.

Hidden secrets, hidden strength, untapped righteousness are all what make this an extraordinary story filled to the overflowing with heroism, cowardice, betrayal and redemption. To watch Younes’ gradual, almost unwilling transformation from nihilism to great courage is the kind of pleasure one always hopes for in a film and rarely achieves. As played by Tahir Rahim, Younes’ growth is subtle but enormous for his outward traits remain the same, he is still a black marketer made more complex with the gradual introduction of a conscience. Rahim, who so brilliantly played a petty criminal transformed into a kingpin while in prison in last year’s “A Prophet,” has been gifted with a face that appears to be a blank slate; but watch his eyes for they truly are the window to his soul for if body language and facial expression do not give away his feelings, the camera’s fleeting glance at his eyes will tell you everything you need to know.

A high point for any film is to be graced with the presence of Michael Lonsdale, here made more ironic, yielding a deeper interpretation as he plays the rector, Si Kaddour Ben Ghabrit; ironic because last year he won a César for playing an aged monk murdered by a band of Algerian fundamentalist terrorists. There is nothing that Lonsdale, the brilliant bi-lingual actor whose career stretches back to the late 50’s, cannot do and here he anchors an emotional film with his calm, knowing presence. He is truly a master and must be considered among the great actors of his or any other generation. I would watch any film he deigns to make.
The supporting cast is very good, with Mahmoud Shalaby as Salim the gifted singer who is at once both self-absorbed and self-delusional; Lubna Azabal as Leila the resistance fighter whose presence helps awaken Younes; and Christopher Buchholtz as the greedy Major Von Ratibor who is a constant threat to the Mosque’s existence. Farid Larbi playing Younes’ cousin Ali gives added dimension, for not only is he a resistance fighter but he also holds the naïve belief that the French will reward the bravery of the Algerians with their independence. In keeping, and probably influenced by Rachid Bouchareb’s great film “Days of Glory,” director Ismaël Ferroukhi hints that justice for Algerians will not come as a reward.

But primarily the credit for this film deservedly goes to Ferroukhi, co-writer with Alain Michel Blanc, and the director of this wonderful moment in cinema that introduces us to facts we didn’t know and people who enriched all of our lives with their bravery. The story was interesting, the pacing slow and enveloping with a terrific cast – there’s not much more you could possibly ask for. I look forward to Ferroukhi’s next film.

Opening March 23 at the Nuart in West L.A.