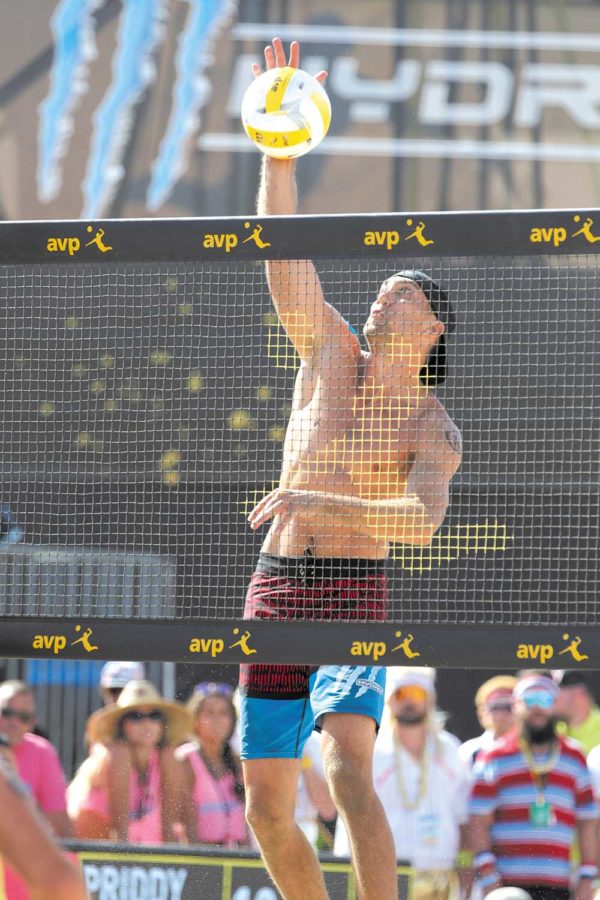 Trevor Crabb is alone above the net during the men’s Manhattan Beach AVP finals. Photos by Ray Vidal

Trevor Crabb and Reid Priddy took the concept of “frenemies” – two people who seem friendly but are under-the-surface enemies — to a whole new level at the Manhattan Beach Open Sunday afternoon.

Redondo Beach’s Crabb and his new partner Priddy – a former Olympic indoor gold medalist — capped off a wild weekend of upsets with a straight-sets victory over Chase Budinger and Casey Patterson in the men’s final, just a couple of hours after posting an even more startling upset in the semis over the heavily favored and top-seeded team of Phil “The Beast” Dalhausser and Nick Lucena.

But it was the way that Crabb and Priddy came together that was the talk of the tournament among the players, who knew that the two men had quietly detested each other for most of the last five years. But when Crabb lost his regular partner Tri Bourne to a hand injury recently and started looking around for a talented replacement with world-class credentials, they put their past hostilities aside.

After just three days of practice and figuring out who fit where on the court, they won the biggest event on the AVP tour – the Wimbledon of volleyball, the granddaddy of beach ball — in their very first tournament together. And now their names will be linked together forever – whether they like it or not — when their plaque is unveiled on the MB Pier at the start of next year’s tournament.

“I’m super stoked right now,” Crabb said moments after the win. “I never really expected this in our first tournament together.”

A philosophical post-match Patterson, coming off a win with Budinger last month at the Hermosa Beach Open, argued that Crabb and Priddy’s past history of mutual hostility and their lack of familiarity playing together – perceived before the tournament as a big disadvantage — actually played out as an advantage.

“No one knew how to scout them or how to play them because they’re brand new,” Patterson said moments after the 21-15, 21-19 loss. “Who knew what kind of chemistry they’d have because they’ve hated each other for five years, but somehow they figured it out.”

And Patterson explained that the pressure to win was far greater for him and Budinger, who were second seeded and had great expectations after winning Hermosa, than it was for Crabb and Priddy. 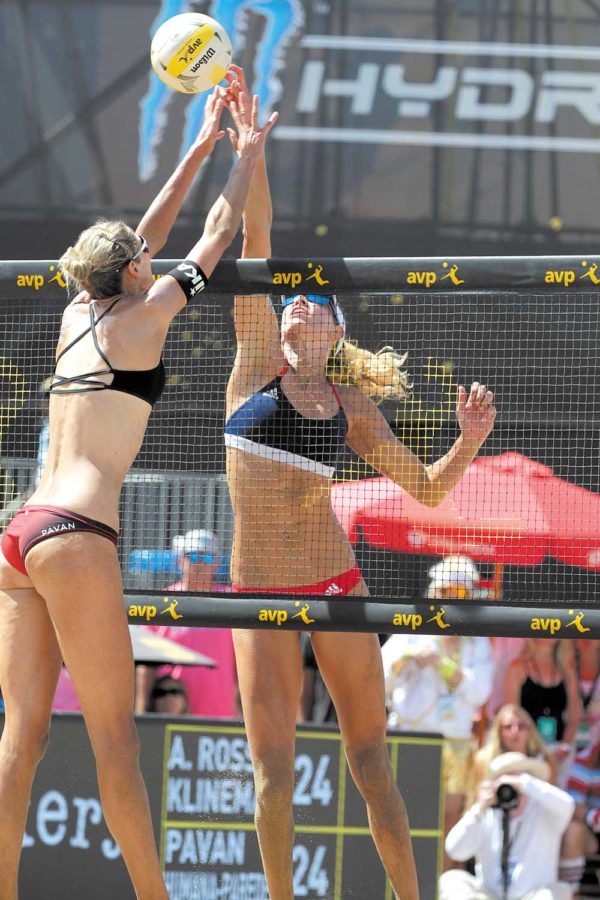 “They got to play free and have fun because there was no expectation for them to win,” he said. “The pressure was on us as a team that had just won a tournament. There was a big difference in the body language.”

Besides Patterson and Budinger’s dashed hopes for back-to-back AVP titles, there were other tension-filled storylines Sunday morning with unanticipated endings as the blazing sun roasted an overflow capacity crowd. Fans were lined up four deep on the south side of the MB Pier.

The biggest shock was the top-seeded “A-Team” of Alix Klineman and April “The Boss” Ross losing their bid to become back-to-back MB Open champions in a stunning, best-match-of-the-day, three-set loss to the Canadians Sarah Pavan and Melissa Humana-Paredes in the women’s final. The 28-26, 16-21, 16-14 win ended several streaks for the A-Team: they had won 30 straight AVP matches and five straight AVP tournaments. Klineman and Ross were so upset that they refused to speak to the media afterwards, a rare event for a sport whose big-name players are usually eager to work with sponsors and the news media to help build the AVP brand.

The A-Team had every right to be disappointed because the match could have gone either way right up until the last futile dig, when a diving Ross could not scrape the ball off the churned-up sand. She laid prone for the next 30 seconds, absorbing the shocking defeat. Across the net Humana-Paredes fell to the sand in relief and exhilaration, just yards away from Ross. Someone stumbling on the scene would not have known who had won and who had lost. The two exhausted, sweaty, sand-covered snow angels were mirror images of each other.

But Klineman, just an inch shorter than Pavan, sandwiched two monster blocks around a serve error to grab a 6-5 lead for the A-Team. Then came the key four-point stretch at 7-7: Pavan leaped over Klineman for a monster block of her own, Ross put a little too much heat on a kill shot that landed just long, and Pavan scored on two beautifully angled mis-direction shots that gave the Canadians an 11-7 lead and seemingly control of the match.

But Klineman put up a monster block, a cross-court kill that just caught the corner, and two more meet-you-at-the-summit blocks and suddenly it was 13-13 and the tension was as thick as the late-afternoon ocean fog that swirled around the stadium court. With side-out scoring now in effect to the end – only the serving team can score a point – they struggled through six points to end up at 14-14. Klineman banged a serve into the net – one of four serve errors the A-Team made in the third set – and Humana-Paredes had a winning block of her own to grab a 15-14 lead. The tense struggle continued through five more side outs until finally, Humana-Paredes slammed a kill shot in the middle of the court, Ross dove for a ball and at last it was all over. A weekend that had started so gloriously Thursday afternoon for the A-Team, as they watched their shiny new plaque being placed on the pier and continued as they cruised to the finals, was now over. 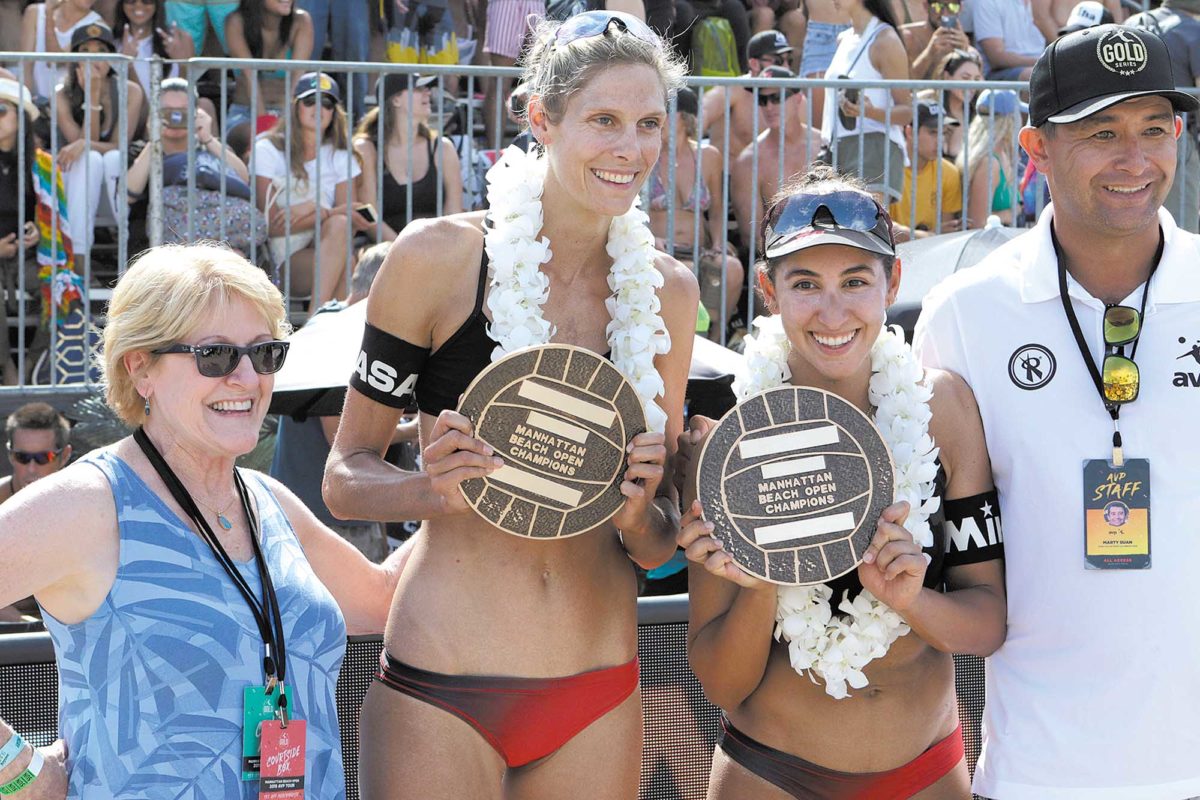 The match was a possible preview of the 2020 Tokyo Olympics. The two teams are rated the top two teams in the world. But the match was marred by one obnoxious fan who repeatedly called out “Go back to Canada” as Pavan started her serve.

Pavan said that far from distracting, the unusual Trump-style heckling fired her up.

“They wouldn’t be saying go back to Canada if they weren’t threatened by us,” Pavan said.

And for those fans who were disappointed that hometown heroine Klineman, who grew up in Manhattan Beach, did not win this event, Pavan noted that she now lives in Hermosa Beach – with a green card — even as she retains her Canadian citizenship and hopes to play in the Olympics for Canada.

The A-team’s loss was a real shock. But there was another feel-bad story for the many, many fans and tournament officials who had hoped to witness the 6-foot-10 Dalhausser win his eighth MB Open, which would have tied him with the legendary Karch Kiraly.

Soon after the semi-final started, there were plenty of signs of an upset brewing. Dalhausser looked sluggish, Lucena was unable to change the tempo and before some fans had even settled into their seats Crabb and Priddy had grabbed the first set 21-12.

The second set started out more competitively at 7-7, but Crabb had two power-kills before Dalhausser – usually, lights-out when he gets a good set and a free swing — dumped a ball into the bottom of the net to fall behind 10-7. Urged on by a shocked crowd, the defending men’s champs kept fighting back and had a couple of set points, but couldn’t close the deal. A Crabb monster-block got them to match point at 22-21, and then Crabb unleashed a power serve that looked to be going out and landed right on the baseline as both Dalhausser and Lucena chose to let it land between them without either one attempting a dig. The frenzied crowd waited for the ruling and then erupted when it was called good. Dalhausser would have to wait another year for another chance at his coveted eighth championship.

“It was just one of those days,” the 39-year-old Dalhausser said.

Coming into the Open Crabb was zero for seven in AVP Finals.

Mission accomplished, with a bonus: the start of a beautiful friendship.