Grounded… and enjoying it 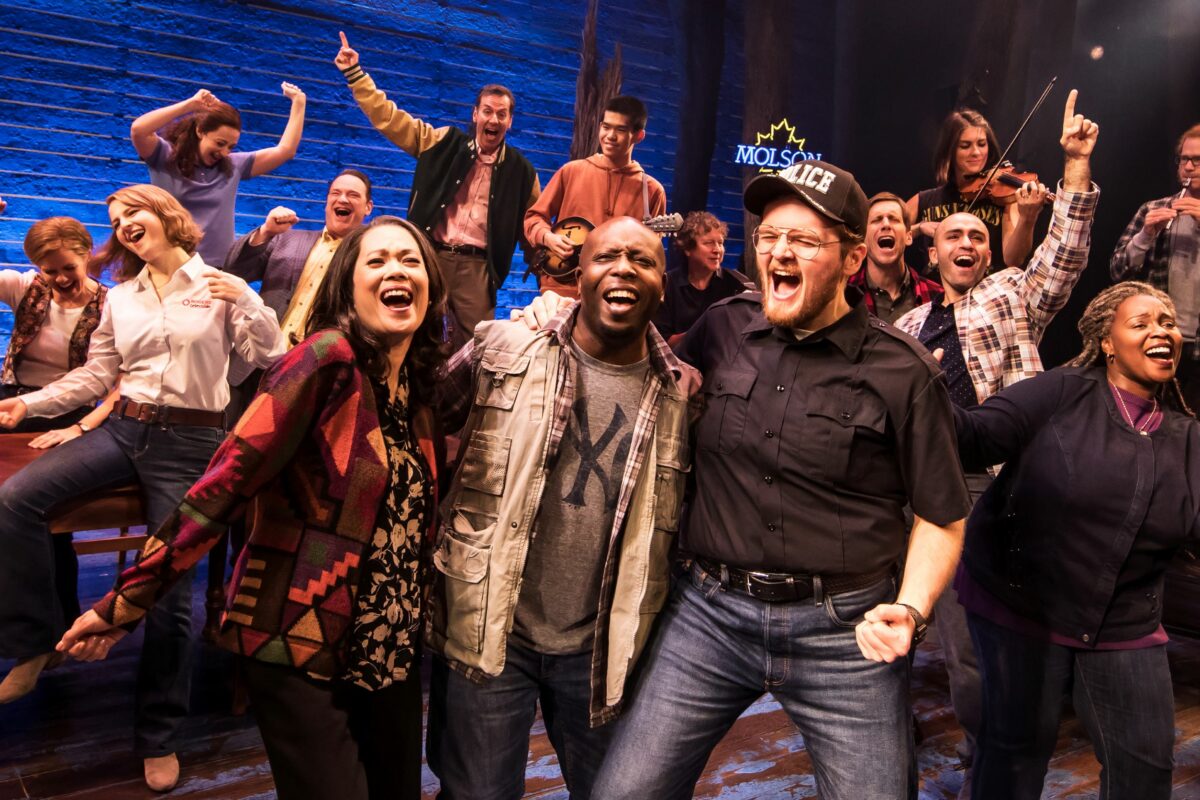 Post 9/11? The North American touring company of "Come from Away." Photo by Matthew Murphy

Nothing but blue skies

“Come from Away” at the Ahmanson

If you’d walked into this show by accident I think you could be forgiven for thinking the actors are in a sports bar and watching the NBA finals. Not only that, but at various points in “Come from Away” the singers and dancers seem to be on the verge of slipping into some numbers from “Riverdance.”

Actually, it’s an impressive feat to pull off an uplifting musical whose tragic origin was the terrorist attacks on Sept. 11, 2001. But the Canadian husband-and-wife team of Irene Sankoff and David Hein, who wrote the book, music, and lyrics for “Come from Away,” have done just that.

On that fateful Tuesday morning the U.S. government ordered all planes out of the sky, to land at the closest acceptable airport (no jumbo jets at Zamperini in Torrance, for example), and for several international flights that meant rerouting to Gander in Newfoundland. Why Gander? Because, when your grandparents were young, airliners were less fuel efficient and often had to stop somewhere and gas up. The airport in Gander was built to accommodate those kinds of airborne leviathans.

Whereas it might see half a dozen aircraft on a normal day, suddenly within a few hours there were 38 planes on the runway. By the end of the day the local population had ballooned from 9,000 to 16,000. Furthermore, the new arrivals were not happy about being set down in Newfoundland. They were also tired, annoyed, and pretty much in the dark as to why they’d been diverted. And, of course, they weren’t immediately allowed off the planes. Anyone who’s been stuck sitting on the tarmac knows what that’s like. You can’t exactly throw open a window to let in some fresh air. The song, “28 Hours/Wherever We Are,” says it all. 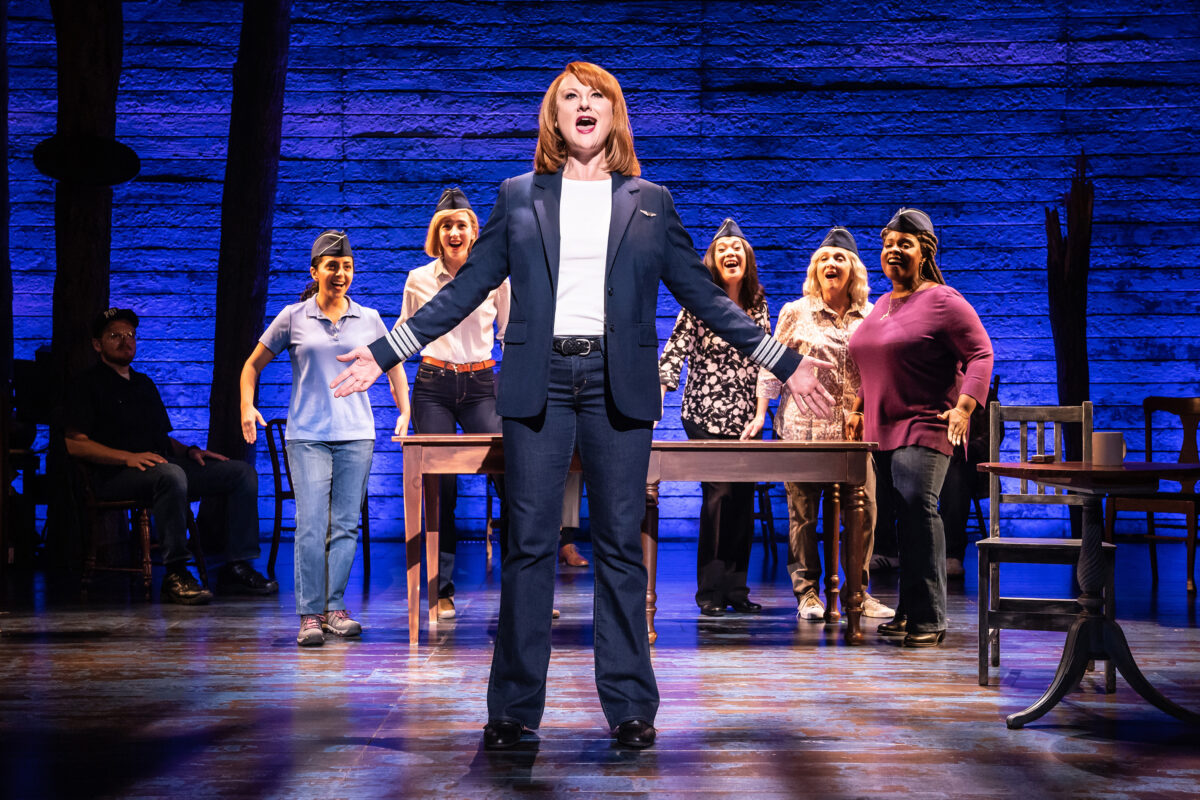 Marika Aubrey and company in the North American Tour of “Come from Away.”
Photo by Matthew Murphy

“Come from Away” features an ensemble cast with each person taking on multiple roles at the drop of a hat or a jacket. At first they’re the Newfounders, the “islanders,” going about their daily business, breaking out into the upbeat “Welcome To The Rock” in which we hear lines like “Fish and chips and shipwrecks, this is Newfoundland.”

Maybe the locals were bickering among themselves on Sept. 10 (there’s a school bus strike, of all things), but pretty soon the donations come rolling in, all the essentials from toothpaste to toilet paper. And their unwilling guests, as it turns out, aren’t in town just for a few hours or overnight, but for several days.

At first all the new arrivals are discombobulated and just want to find a pay phone, and we’re reminded that cell phones were not prevalent just 20 years ago. But then the inevitable starts to happen and many of the passengers start to bond and become friends.

Onstage, all of this is going on at breakneck speed: “Come from Away” flies nonstop from start to finish and along the way we meet an assortment of folks, black, white, yellow and gay, so to speak, who all find common ground (disaster does that, doesn’t it?). Nick from England and Diane from Texas even find true love and, according to the epilogue, later become man and wife. Aw, shucks!

In one of the few non-ensemble numbers, a woman we know only as Beverley (last name Bass in real life), recounts in song how she’d always wanted to become a pilot, and that despite prejudice she eventually became the first female captain for American Airlines. 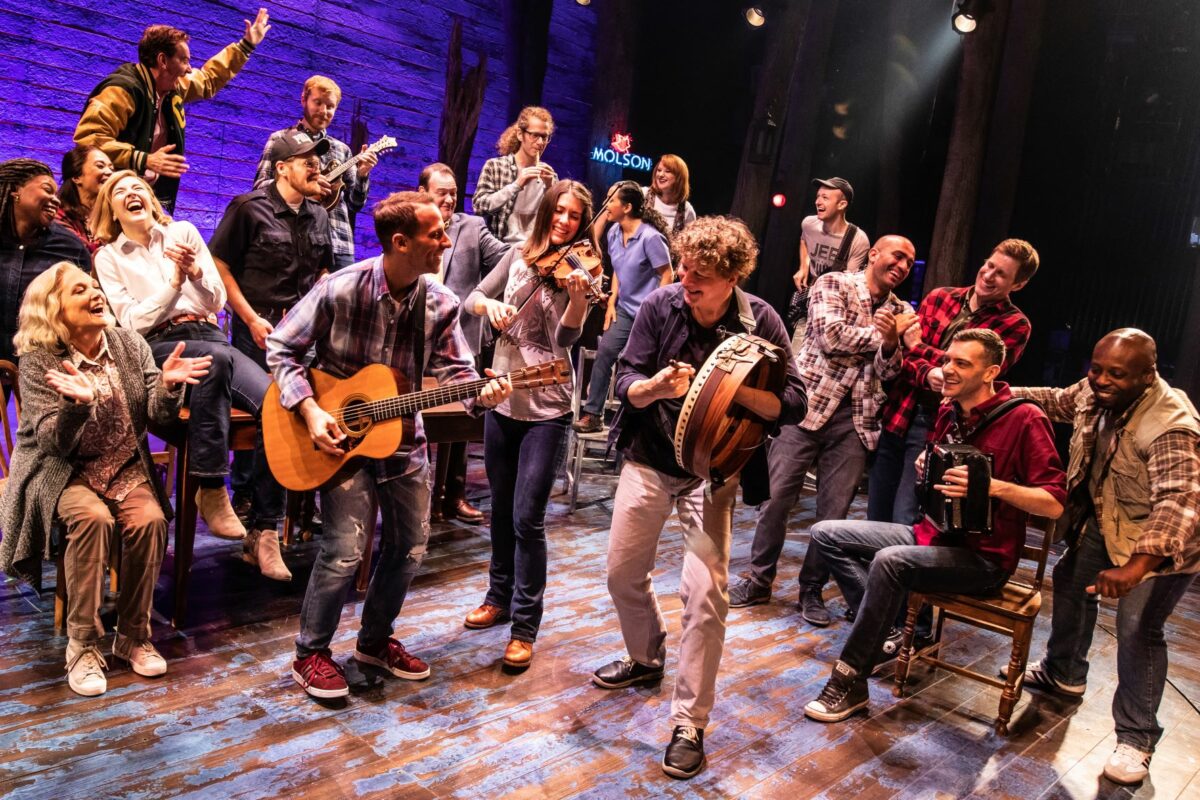 Tragedy? What tragedy? The North American touring company of “Come from Away.”
Photo by Matthew Murphy

Towards the end of this campfire musical (because it’ll warm you all over), with an onstage band that seems to have floated over from the Emerald Isle (replete with uilleann pipes, mandolin, fiddle, bodhran, etc), everyone parties, gets drunk, smooches, and eats cod—don’t forget that line about fish and chips). But there is a sobering undertone, not only in the all-inclusive religious “Prayer” but in the character of Hannah (Danielle K. Thomas) whose son is a firefighter in New York City. She keeps calling and leaving messages until his answering machine is full. Other than that, we might almost forget why everyone has suddenly congregated in Gander.

This is a touring production, and in fact the show was in town just three or four years ago, so clearly there was a certain amount of clamoring and drum beating to have it back, however briefly. It will be dropping down to Segerstrom Hall in Costa Mesa after this, starting June 21, so don’t fret if it leaves L.A. before you can reboot or pick up the phone.

My own expectations were low, at ground level, which maybe was a good thing because I ended up being surprisingly entertained. Yes, I do think it’s a little Pollyannaish, and a small part of me is even cynical about such a feel-good show derived from a tragedy of such unbelievable proportions. No one will need a grief counselor after this one.

Come from Away runs through Sunday, June 12, at the Ahmanson Theatre, 135 N. Grand Ave, downtown Los Angeles in the Music Center. It’s smartly directed by Christopher Ashley with musical staging by Kelly Devine, scenic design by Beowulf Boritt, lighting design by Howell Binkley, with commendable contributions by many others. It’s come to us via Junkyard Dog Productions, the La Jolla Playhouse, and Seattle Repertory Theatre. Performances, Thursday through Saturday at 8 p.m., Saturday at 2 p.m., Sunday at 1 and 6:30 p.m. Running time: one hour and 40 minutes with no intermission. Tickets, $40 to $150. Call (213) 972-4400 or visit CenterTheatreGroup.org. ER

Ahmanson Theatre, Come from Away