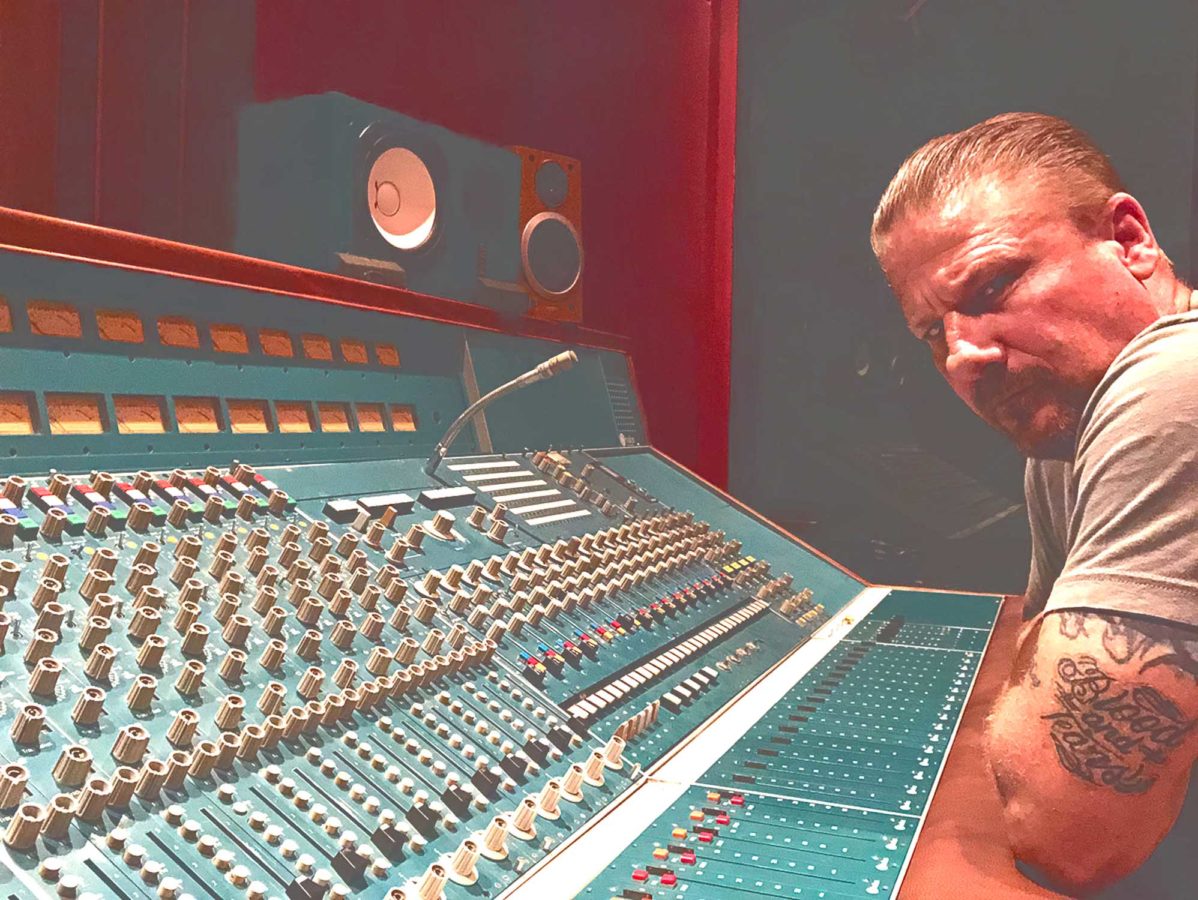 Ken Seaton at the soundboard during the recording of the Wailing Souls’ 50th-anniversary album in Kingston, Jamaica. Photo courtesy of Wailing Souls

“The taxi would pick us up every day. We would pick up Flabba from Roots Radics, we’d go up to the hills of Kingston and go to Alborosie’s home studio,” Ken Seaton recalled of his recent trip to Jamaica. Seaton owns Hardline Entertainment in Hermosa Beach and manages the legendary reggae band Wailing Souls. The band performs Sunday during the Hermosa Beach Summer Concert Series..

Alborosie is Alberto D’Ascola, a reggae performer and producer, also known as the “Italian Reggae Ambassador.”

“Alborosie has all the original gear from Channel One [Kingson’s legendary recording studio]. He has the original mixing board from Harry J Studio, which I got to sit next to for five days and I still get chills even thinking about it. It’s the mixing board used to record Bob Marley’s “I Shot the Sheriff,” “No Woman, No Cry,” “Rastaman Vibrations”– all his early records. Peter Tosh, Bunny Wailer, Mighty Diamonds, Wailing Souls — everybody recorded through that board through the seventies and eighties.”

On the Jamaican trip, Wailing Souls, a three-time Grammy nominee, celebrated their 50-year mark. They took Seaton to Trenchtown, the birthplace of reggae, to record their upcoming album.

Seaton grew up in Palm Springs. His grandfather, a stand-up bassist, performed with Perez Prado. Seaton decided to pick up the stand up-bass like his grandfather, but after his bass wouldn’t fit on the school bus, he switched to cello. He performed in many competitions, but was not a fan of the spotlight.

When he moved to the South Bay, he explored new music, gaining recognition by stepping out of the spotlight and supporting rising artists.

In 1980, at the age of 17, he lived on Catalina Avenue, next to Toe’s Tavern. That summer, he was invited to the VFW Post on Catalina Avenue to see Black Flag and The Chiefs. “It was my first real introduction to a live punk show,” he recalled. Seaton would hang out with his friends on the Hermosa Beach walk streets during the day and go to punk and reggae shows at night.

“The third vinyl Reggae record I bought was that Firehouse Rock record by Wailing Souls,” he said, pointing to the platter at the center of his studio. “Who would know, fast forward almost 40 years later I would be managing them. I am pretty excited to have them come to Hermosa and play the Summer Series.”

In the mid-1980s he met Fletcher Dragge from Pennywise. “I told Fletcher, I’m tired of working at this print shop. I want to start my own printing business. This was about the time Pennywise was starting. So he, his brother Kristian and I bought this offset metal printing press. We manhandled it on two legs onto my Toyota truck, dropped it off in a garage and there I was, in business, printing T-shirts, flyers and business cards,” Seaton said.

“That’s how I ended up with Epitaph, Hellcat, Nitro, and Kung Fu records as clients. We called it the rock and roll print shop. Beachfront Printing’s first actual storefront was on Aviation Boulevard. Eventually, we built a studio in my shop where Pennywise would practice. They wrote their first two records, the Blue Record (self-titled) and Unknown Road in my print shop.”

Seaton toured with Pennywise and other groups while running Beachfront Printing. In 2000, he formed Hardline Entertainment and to date has worked with Pennywise, Save Ferris, TSOL, HR of Bad Brains, Strung Out, Long Beach Dub Allstars, and Wailing Souls.

“Through my travels with upcoming bands, I gained a lot of connections. But when the record deals started drying up, there was no money to shoot videos. I thought, Well, I guess I’ll buy some gear and we’ll start shooting videos and recording records. The studio is called ‘the porch’ for a reason.” He transformed his back porch at his house into a recording studio.

Paul D. Hudson, known as HR, from the group Bad Brains, said, “Ken is an honest man, and he has been giving us a chance to do our own music. In no way did he force the band to play a style of music.” HR is putting out a new album titled Give Thanks on Nov. 18. The photo shoot was shot by Jack Grisham of the legendary punk band TSOL. “It was very funky. His friend cooked for us and we all had a beautiful time. For the photos, I wasn’t smiling and he was telling me, ‘Smile more! Smile more!’ He put me in the bright lights and I had a big smile on my face.”

Marshall Goodman (aka Ras MG) from Long Beach Dub Allstars and Sublime, said of Seaton,  “Ken just comes up with ideas. We toss them around and make it happen. He is integral to our operation. I talk to him all the time.”

“He is definitely a go-getter and no-nonsense. There was a time when we were in Florida. He is our day to day manager, not a tour manager, but he came out to help us. We were on a two lane highway going from the east coast across to the west coast of Florida. He was driving and I had to tell him ‘Don’t pass anymore.’” He was determined to get Ras MG and Long Beach Dub to their destination on time.

Seaton’s connection to the Wailing Souls stems from his love of reggae as a kid. He began working with the band following a Long Beach Dub Allstars gig in which Winston “Pipe” Matthews, from Wailing Souls, appeared as a guest singer. Seaton took on Wailing Souls one year later.

“Knowing that Pipe was coming to sing with LB Dub, I brought my Firehouse Rock album. It’s the only album I have ever asked an artist to sign,” he said.

Wailing Souls grew up in Trenchtown, a neighborhood in Kingston, with legends Bob Marley and Peter Tosh. “Those guys were like some of our mentors. The person who taught them was Joe Higgs and he taught us. Bob was like my big brother, we were all like family,” said Lloyd “Bread” McDonald, lead singer of Wailing Souls. The group helped form Greensleeves Records, which popularized Jamaican music in the ‘60s and ‘70s.

“In June of this year we were there while we recorded our 30th album,” said McDonald.

“Ken has only managed us for a year and he got us the record deal that got us back home to make our 30th album,” McDonald said.

The band has toured with Bob Dylan and Santana.

“Good music is good music no matter what the genre,” McDonald said. “At most of our shows, you find there is a nice cross-section of people of all ages. You find kids in their teens, you find people in their twenties, thirties, our music appeals to a lot of folks. We try to sing songs that cut across all ages and all boundaries. We sing about peace and love and humanity and unity.”

In addition to their new album, Seaton is putting together a Wailing Souls tribute album to celebrate the band’s 50th anniversary. Sublime is going to contribute their cover of “Pawn Shop,” and Long Beach Dub Allstars will add their cover of  “Jah Give Us Life.”

Wailing Souls performs Sunday, Aug. 25, the final day of Hermosa’s Concerts on the Beach,  along with Mariachi El Bronx, Gamblers Mark and Lola Rising, beginning at 4:30 p.m., south of the pier. Saturday’s Concert on the Beach includes The White Buffalo, Pounded by the Surf, Trapdoor Social and comedian Steve Byrne. The movie “Grease” will screen after Saturday’s concert.