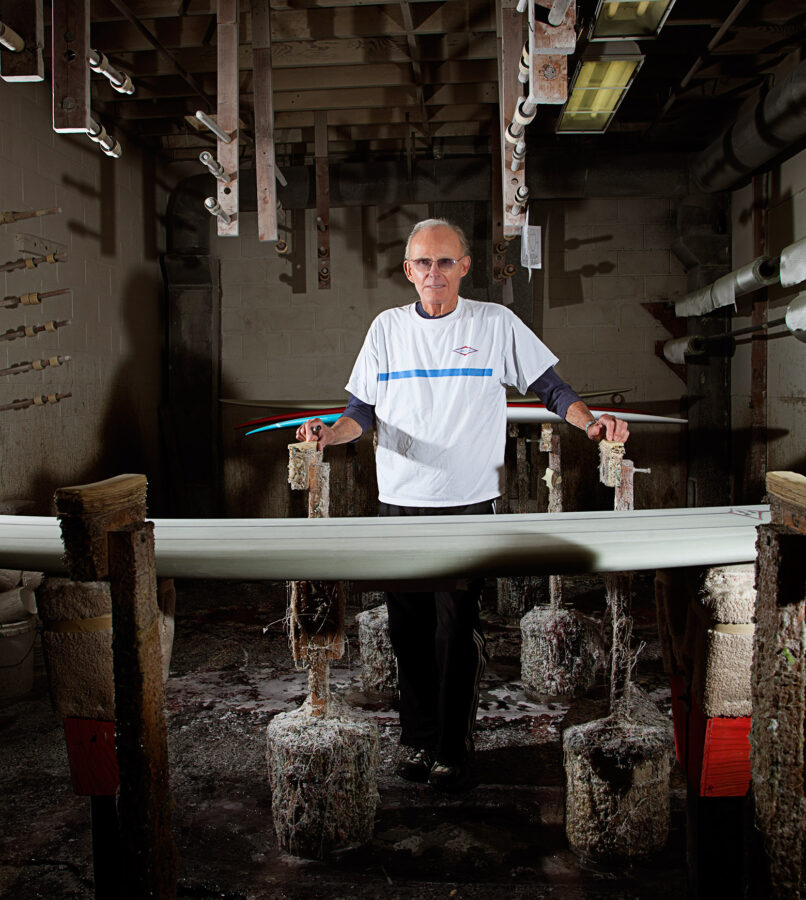 Hap Jacobs in his Hermosa Beach surfing bay in 2014. Photo by Mark Kawakami

Dudley “Hap” Jacobs is acknowledged, along with fellow Hermosa Beach surfboard shapers Greg Noll, Dewey Weber, and Bing Copeland, as among the greatest shapers from surfing’s Golden Era, in the late ’50s and early ’60s.

That sentiment was expressed in different ways by all of the more than 100 surfers at the paddlout, who spanned over six decades of surfing.

“Gentleman,” was the word used most often to describe Jacobs.

The paddleout was a tribute to both Jacobs’ character and his craftsmanship. The boards brought to the paddleout, dating back to a noserider used in the 1965 C Street Longboard Contest, rivaled the best surfboards made today. The esteem Jacobs’ boards continue to be held in was evident from the surfboard shapers who attended the paddleout. They included Jon Mangiagli, Pat Ryan, Jose Barahona, Tyler Hatzikian, Matt Calvani and Adam Davenport.

Jacobs learned to shape during the balsa era, in 1953, from pioneer board builder Dale Velzy and soon opened his own shop at 422 Pacific Coast Highway. Surf publisher Steve Pezman called it Notre Dame of surf shops because of its meticulous design. He closed the shop in 1971, at the advent of the shortboard revolution, but resumed shaping in the early 1990s during the longboard resurgence. He shaped is final board in April 2019. Jacobs passed away at his Palos Verdes home on Dec. 19, 2021 at age 91. 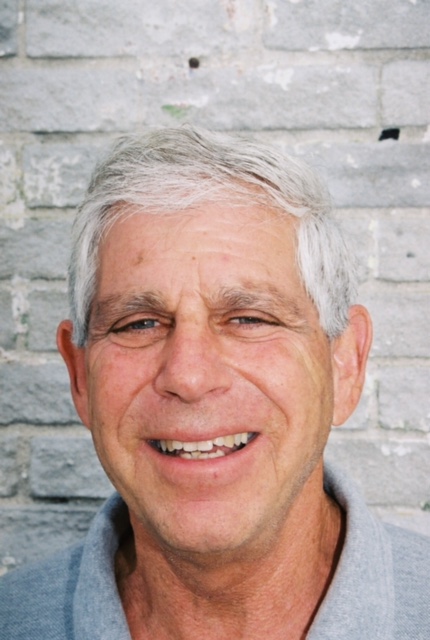 Hermosa Council candidate Ron Pizer in 2002. He campaigned on a promise to raise taxes, and lost. Easy Reader file photo

In his characteristically frank way, he also campaigned for city council in 2002, on the promise to raise taxes.  “We have ignored our infrastructure for too long, he told voters.” He lost the election.

After graduating from USC with a degree in electrical engineering, and an MBA, he served as a Navy officer on the USS Rogers in the South Pacific.

The engineering company he founded was known as an outlier in the straight-lace electronics industry. He focused on hiring capable people whom he liked. When he was younger, he traveled across the South with his brother, and the Black Crow laws left a lasting and disturbing impression.

Pizer was a camera hobbyist. His photography reflected the happiness he found hiking, and spending family vacations in the Sierra Nevadas, and national parks.

Pizer passed away April 29, a few weeks short of his 89th birthday. 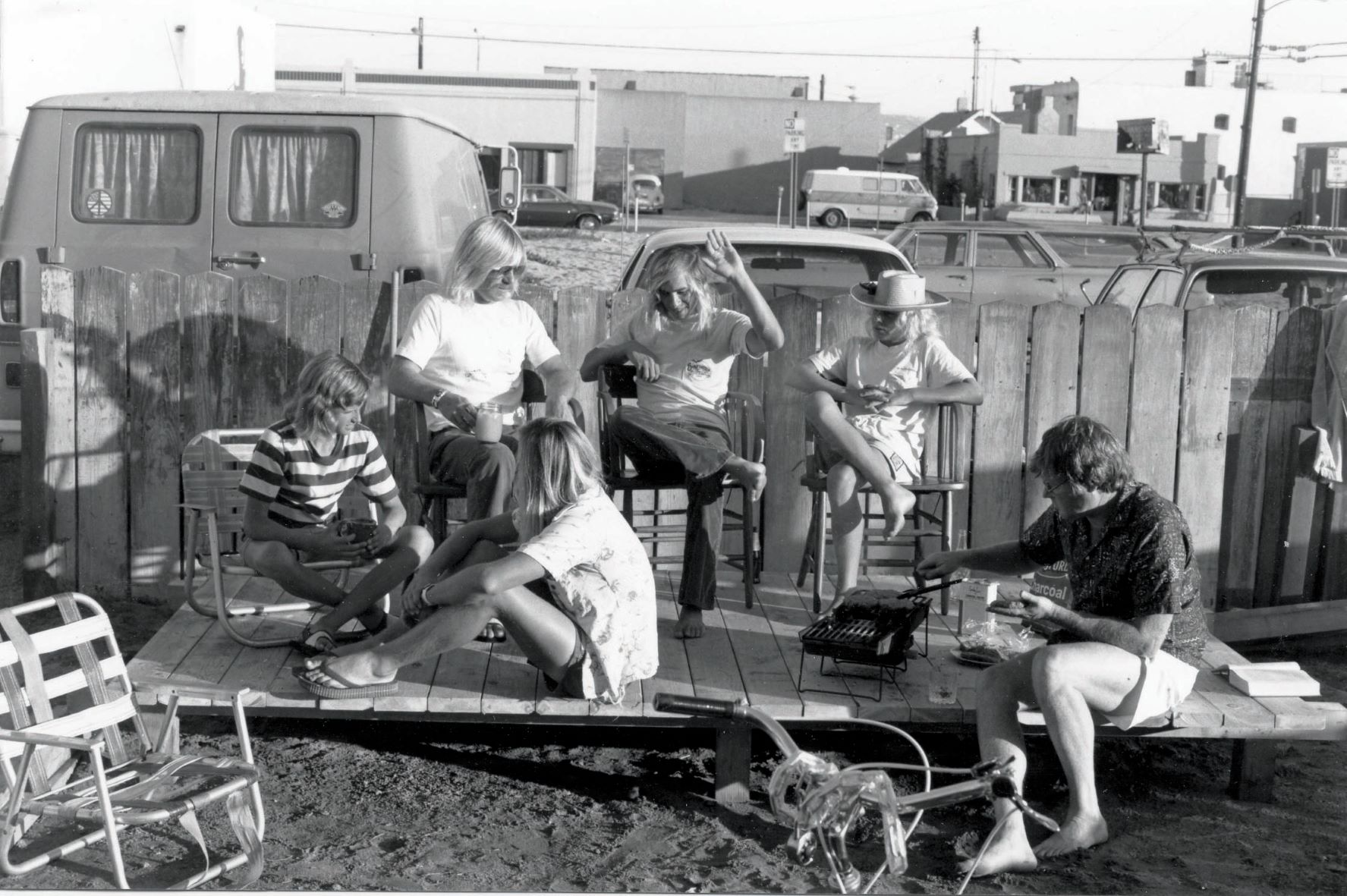 In the early 1970s, Albert “Doc” Ackroyd took in a crew of Hermosa Beach’s best high school surfers. They were allowed to stay at his beachfront home on the conditions that they did house chores, and got out of the water when he hung a towel from his second story window, signaling it was time for school.

Even though Doc did not surf, the best surf club on the coast, Windansea, was thrilled to have Doc as a member. It was the only surf club to have its own doctor. When the team competed in Mexico and Hawaii every year Doc went along to take photos as well as treat injuries.

Doc passed away in July, at age 92, of natural causes.

In the early 1970s Peter Barks, and his brothers George, and Gus led a bitter political fight against creation of a redevelopment agency in South Hermosa.   The city council had declared the old boat yard, and the surrounding homes  “blighted.” State law allowed cities to capture the tax increment of “blighted” neighborhoods after they were down and redeveloped.

The Barks brothers’ parents had emigrated from Greece in 1978, and owned a Market at Second Street and Pacific Coast Highway, where the brothers worked.

The Barks brothers got the redevelopment agency disbanded, helping to preserve South Hermosa’s small town character. Though unsuccessful in attempting to recall the council, they also succeeded in getting their oldest brother George elected to the city council. George was the top vote getter in the 1974 election.. 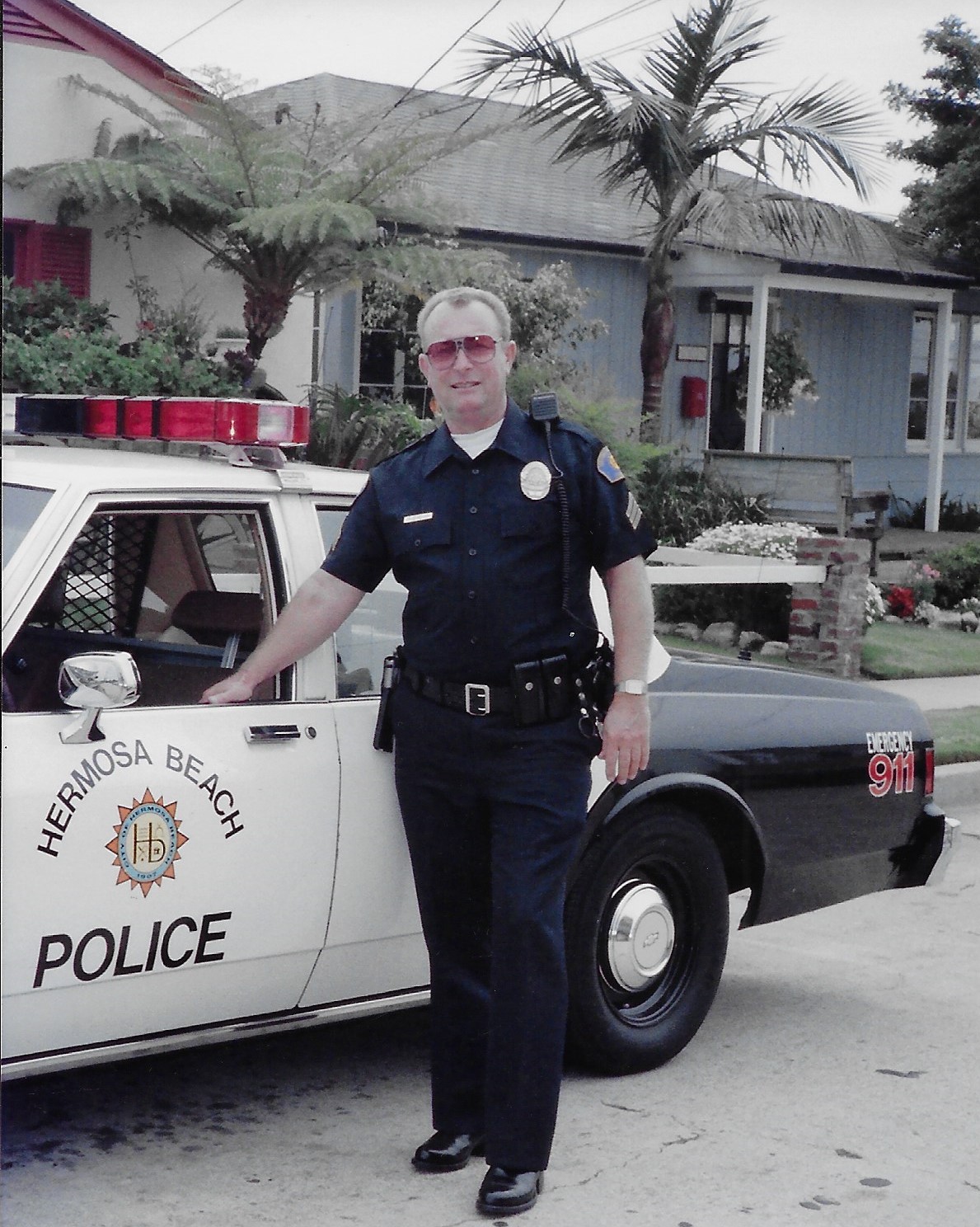 Wally Moore became the face of the Hermosa police department during his long tenure as public information officer. Photo courtesy of the Moore family

Long time Hermosa Beach Police Public Information Officer Wallace “Wally” Moore passed away May 16, at age 81. Moore joined the department in 1964, when Hells Angels gathered at the Taco Bell on The Strand. During his years as an undercover officer, his cases included the infamous Bittaker-Norris, and Trash Bag murders, and the inter law enforcement agency investigation of the Columbian Cartel’s “Boston George” Jung, played by Johnny Depp in “Blow.’

Moore’s son said he took a sympathetic, small town approach with Hermosa’s punk musicians, arresting them at night, and appearing in court as character references for them the next day.

As a member of the Hermosa Police Officers Association, Moore led the fight against city council efforts to dissolve the police department, and contract with the Los Angeles County Services.

Prior to becoming a police officer, Moore was a news photographer for the Los Angeles Herald Examiner, and the Redondo Beach Daily Breeze. 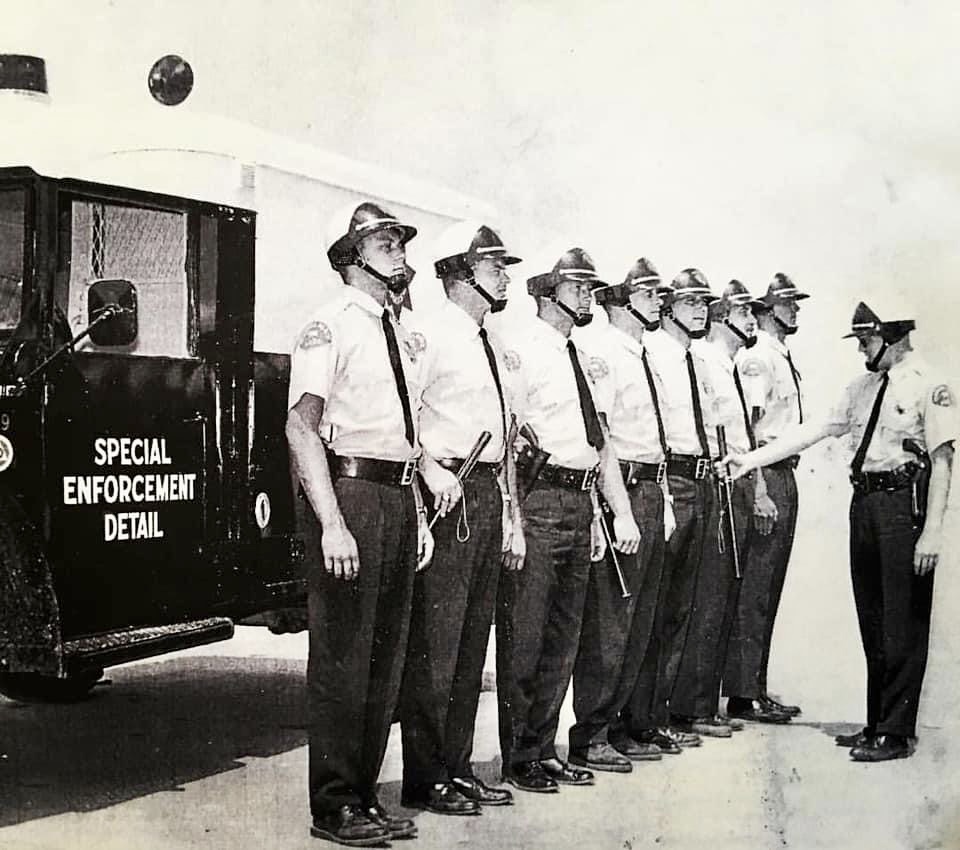 Kyle Brown (left) and fellow law school students John Cheroske, Stan Ralls and Kenny Rosskopf were recruited by Hermosa Beach Police Chief Bill Berlin in 1962 because Berlin thought law students would be good officers, and would better understand the law when they became lawyers. Photo courtesy of the Brown family

Brown was gifted and grateful

Hermosan Kyle Brown was already recognized as intellectually gifted when he entered kindergarten. He quickly skipped two grades and at 16, was offered scholarships to USC and Princeton.

He was an equally gifted athlete, a hard hitting, left handed first baseman. While in high school, the St. Louis Cardinals offered him a pro contract. He declined the offer, in favor of an academic scholarship to USC,where he would play for the legendary baseball coach Rod Dedeaux. His relationship with Dedeaux would last decades, during which he was the Dedeaux family trucking business’s attorney

In 1962, while still in law school, Brown and several of his classmates were recruited by the Hermosa Beach Chief of Police. The Chief thought law students would make great cops and it would be a great way for them to understand police work when they became lawyers. Fellow recruits included future South Bay attorneys Stan Ralls, John Cheroske, and Kenny Rosskop.

His kids remember him as a great dad, who spent years as a Hermosa Little League coach and league administrator. He also teamed with Stan Ralls to coach AYSO despite knowing almost nothing about soccer.

During a routine visit to his doctor, Brown mentioned to his son Chris, “You know, I’m not afraid of dying.”

His son asked his dad what prompted him to say that.

He replied, “I’m just very content. I grew up with almost nothing and in every facet of my life —  family, friends, work, travel, I’ve blown away my wildest dreams. Don’t get me wrong, I hope I’m around a lot longer, but when my time comes, I’ll be ready. I’m completely content.” 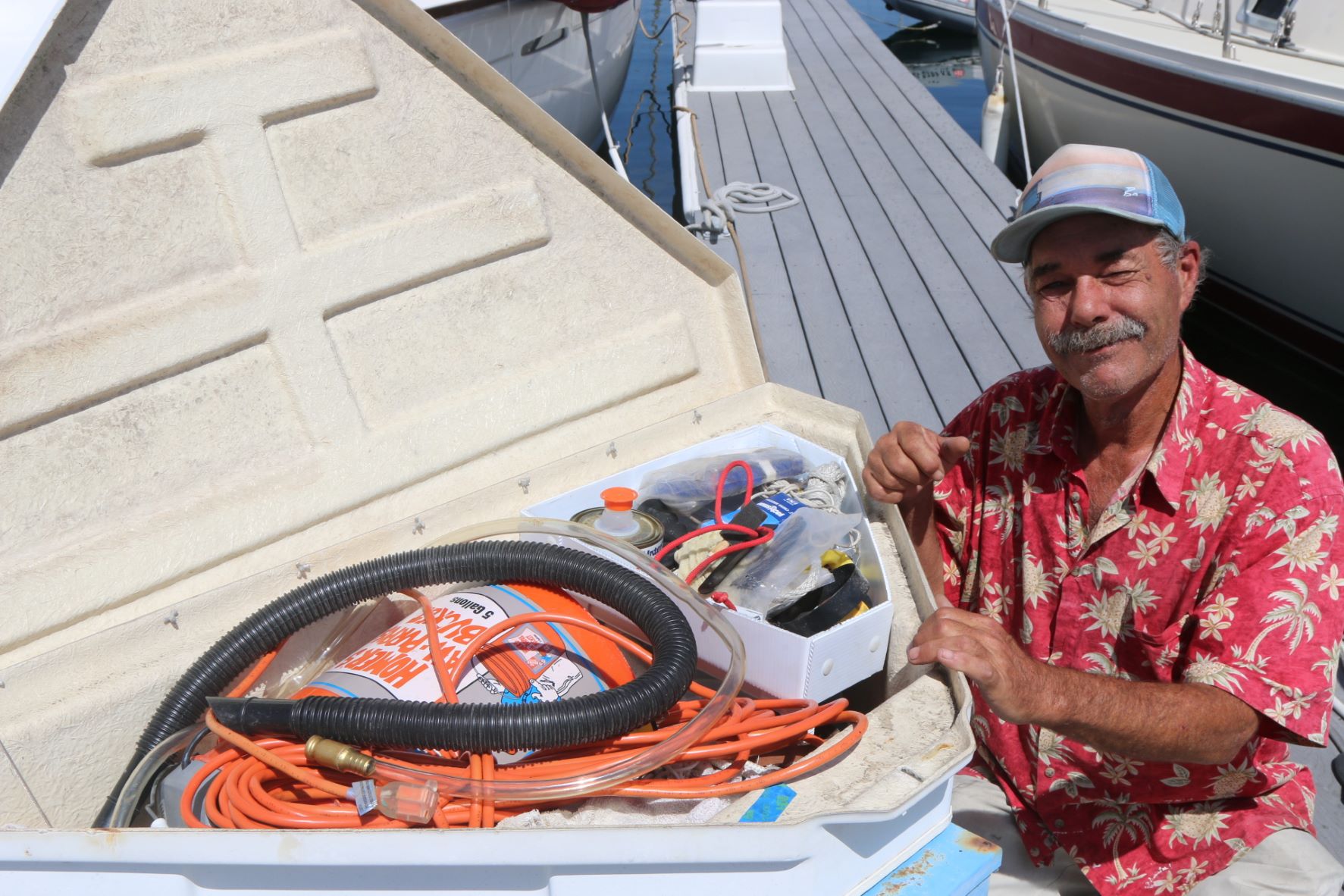 Billy LeFay with a boat dock organizer he invented for the widely used, but oddly shaped storage units. Photo by Kevin Cody

Billy LaFey was that rare combination of waterman and boatswain who could handle any situation in or on the ocean. He learned his waterman skills as a Los Angeles County Lifeguard. His boating skills came from an innate genius for identifying problems, and inventing solutions. He invented a life preserver that doubled as a foul weather jacket, and a better dock box for boat slips. He conceived of a Triple A service for boats that became Vessel Assist.

He taught new boat owners to sail and veteran sailors to race.

“Anyone seen Billy?” was a common refrain among King Harbor boat owners, who knew he’d come to their rescue, whatever they need.