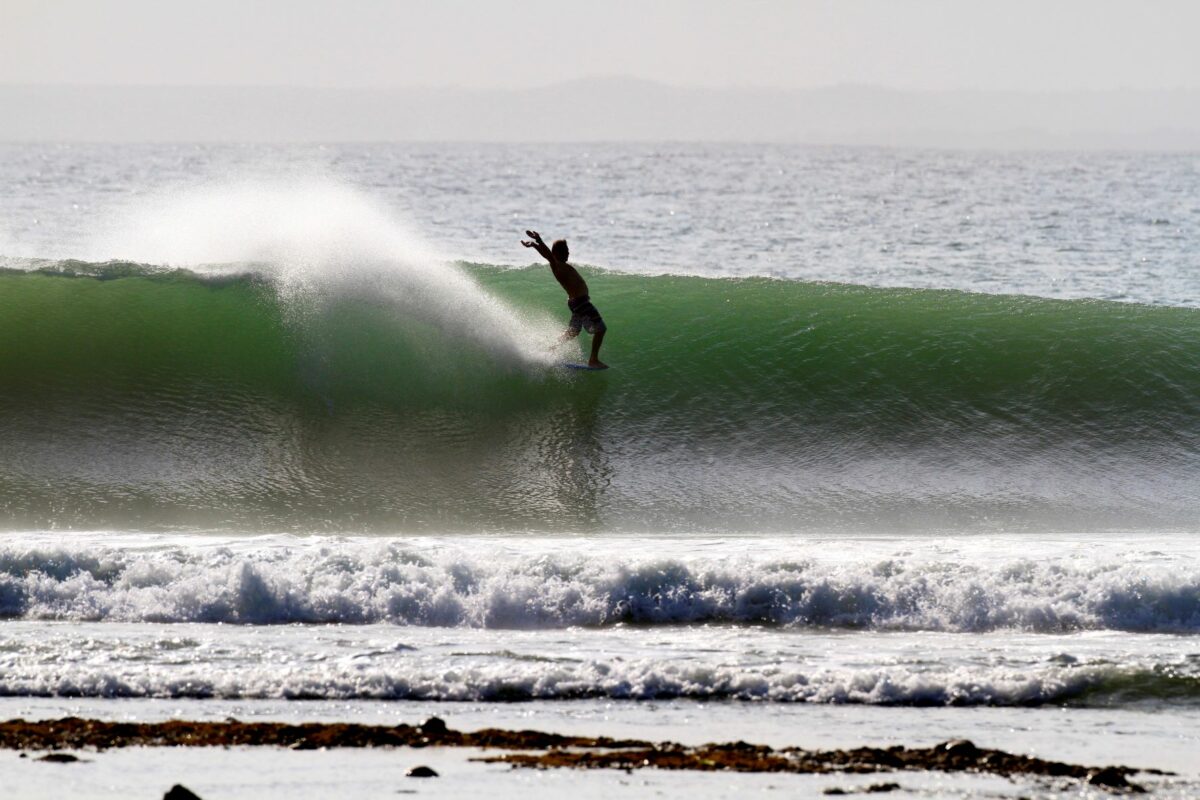 Charlie Quesnel soul arching at 20/20s, G-Land in 2013, when he was 64. He has gone to the Java surf spot every year on his birthday for two decades. 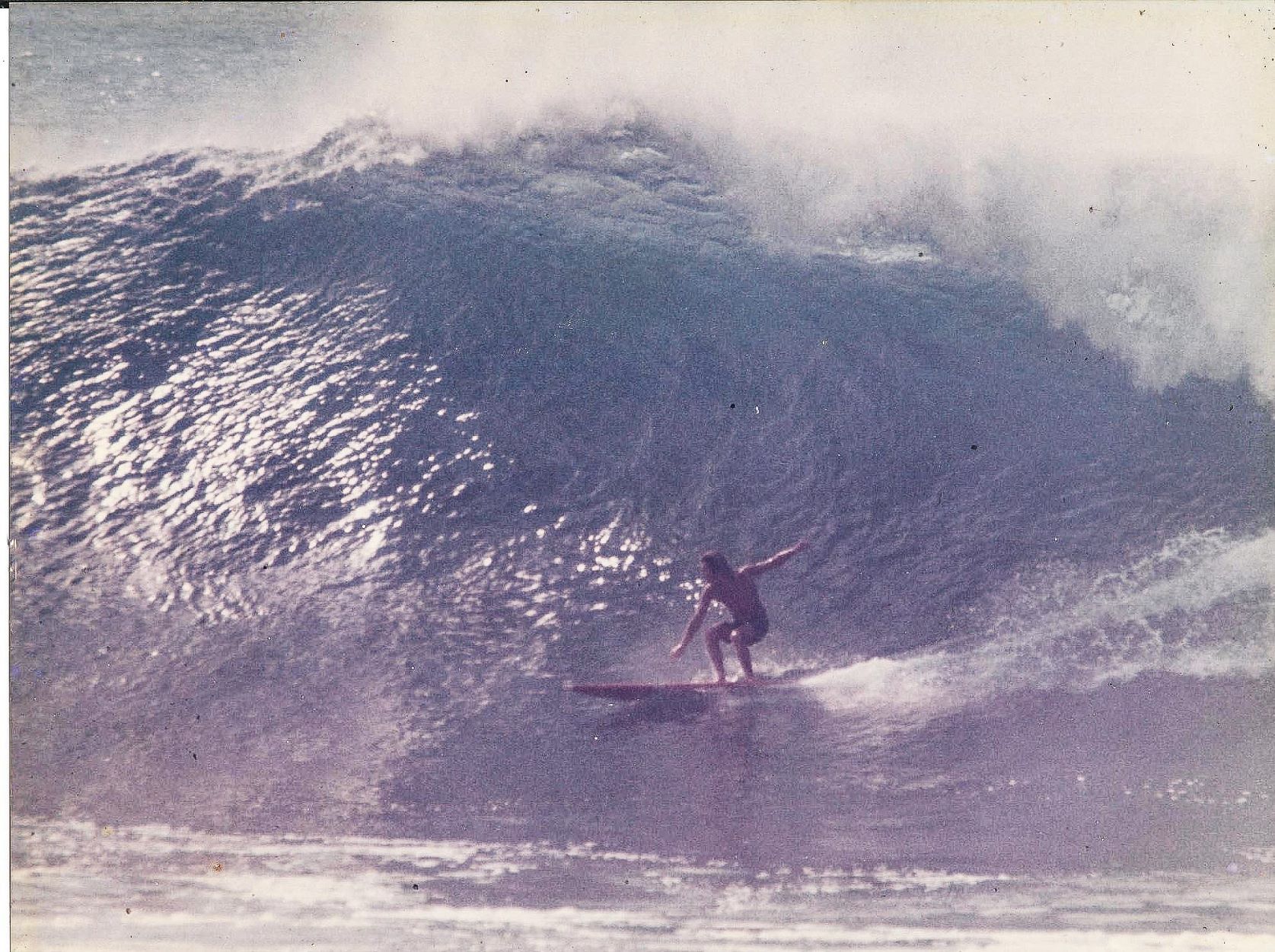 Charlie Quesnel at Honolua Bay, Kauai during the legendary Dec. 1969, on an 8-foot-3 Dick Brewer Red Rocket pintail. He was living on Honolua Beach in a pup tent. Photos courtesy of Quesnel family

After moving from Hermosa Beach to Maui in his teens,  Charlie Quesnel lived, and led surfing

Charlie Quesnel surfed his first big waves at Waimea Bay over Christmas break during his junior year at Mira Costa High School. Upon his return to school, schoolmate Mike Purpus asked how he did it.

“We called Charlie ‘Flea’ because he was so small, and was afraid of big waves. He wouldn’t even surf the Redondo Breakwater on big days,” Purpus recalled.

Purpus credits the answer Quesnel gave him with his own, subsequent success as a big wave rider on Hawaii’s North Shore.

“Whenever I paddled out at Pipeline, Sunset or Waimea, I did what Charlie told me that day,” Purpus recalled recently, in discussing Quesnel’s induction into the the Hermosa Surfer Walk of Fame. Purpus, an inaugural Walk of Fame inductee, is now one of the Walk of Fame judges, along with Mike Balzer, John Joseph, Randy Meistrell, John Baker and Dennis Jarvis.

“I was sitting at Waimea with (Mira Costa classmates) Dru Harrison and Steve Slickenmeyer in the winter of ’66, eyes wide open,” Quesnel recalled of the day he surfed his first big waves. “We were watching guys like Joey Cabell, Peter Cole, Buzzy Trent, and George Downing. They were charging. An old friend named Steve Ball came upon us, and said to me, ‘Come on Charlie, I can see it in your eyes, you want to paddle out. No worries. Just go for the first wave you can, and take a wipe out, and you’ll be over the fear of it.’ I did just what he said. Because I was so light and my board so small in comparison to all the old guys’ boards, I got held at the top of my first wave, and over the falls I went. I survived, and had a pretty good day, considering I was only 17 years old.”

Quesnel learned to surf in El Porto on an 8-foot “backyard special” balsa board his dad bought him when he was nine years old. The following year, his parents divorced and he moved with his mother to Hermosa Beach. 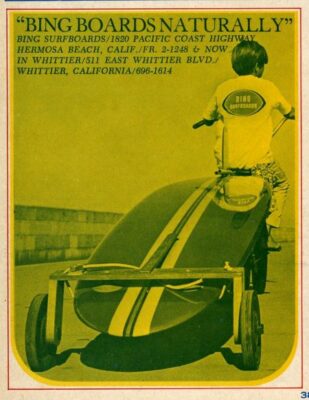 Charlie Quesnel was featured in early Bing Surfboard ads because as Bing Copeland recalled, Charlie was so darned cute.

Bing Copeland lived across the street. Copeland was a surfboard builder, who, along with Greg Noll, Hap Jacobs and Dewey Weber, established Hermosa’s claim as Surf City during the Golden Era of Surfing, in the early ‘60s

Bing offered to build his 10-year-old neighbor a surfboard for $110, which he could pay off at the rate of $10 a month. Quesnel began making payments by washing dishes at Frank and Goldie’s Surf Boarder on 22nd Street.

After the second payment, Bing offered Quesnel a deal.

“Charlie was so darn cute, I offered to forgive his surfboard payments if he would appear in our Surfer Magazine ads,” Copeland said.

The beach at 22nd Street was home to the Double Deuce Danglers, who introduced Quesnel to surf spots up and down the coast. At Mira Costa, he, along with Purpus, Harrison and Slickenmeyer, satisfied their PE requirement by surfing during first period. When he was a sophomore, he made his first trip to Hawaii, as a member of the Bing surf team, to compete in the Makaha Championships.

“My mom let me take off the weeks before and after the Christmas break, so long as I kept my grades up,” Quesnel said.

He also competed with the Bay Cities Surf Club against surf clubs from Wind ‘an Sea, Malibu and other California beach towns.

The summer he graduated from high school, Bing took him, Slickenmeyer and David Nuuhiwa on a sales tour of east coast surf shops.

“We started at Orchard Beach, Maine, and followed the contest series down the coast in Bing’s Pontiac Catalina Vista Cruiser station wagon to Coco Beach, Florida.

“After I graduated from Mira Costa in 1967, it seemed again like a natural progression to move to Hawaii. I worked for Bing as a glasser during the spring and summer months, and when work slowed down in the fall Bing would lay me off  so I could have an income during the winter months on the North Shore.”

“In the summer of ’68 I made my first-time trip over to Maui, with Dru and Slick. We ended up checking out Mala Wharf with our local friend Buddy-Boy Kahoe. We pulled up to perfect four- to six-foot lefts with nobody out. Buddy-Boy told us, ‘See that sewage drain pipe on the beach, no good.’ Dru, Slick and I looked at each other and thought, ‘No big deal. We’re from Hermosa Beach. We surf in conditions like this all the time. For the next three hours we surfed all by ourselves.

“When I got back to Oahu I decided to move to Maui to get away from the crowded North Shore. The next year, I went back to Maui with Greg Albertini, a friend from San Diego. We bought pup tents and camping permits from the Chings, who owned  Honolua Bay Store and the Honolua Bay campgrounds. We surfed the bay for the next four-and-a-half months, going back to the Chings every two weeks to renew our permits. That was the winter when one of the biggest northwest swells ever hit in the first week of Dec. ’69, and we were right there for it.” 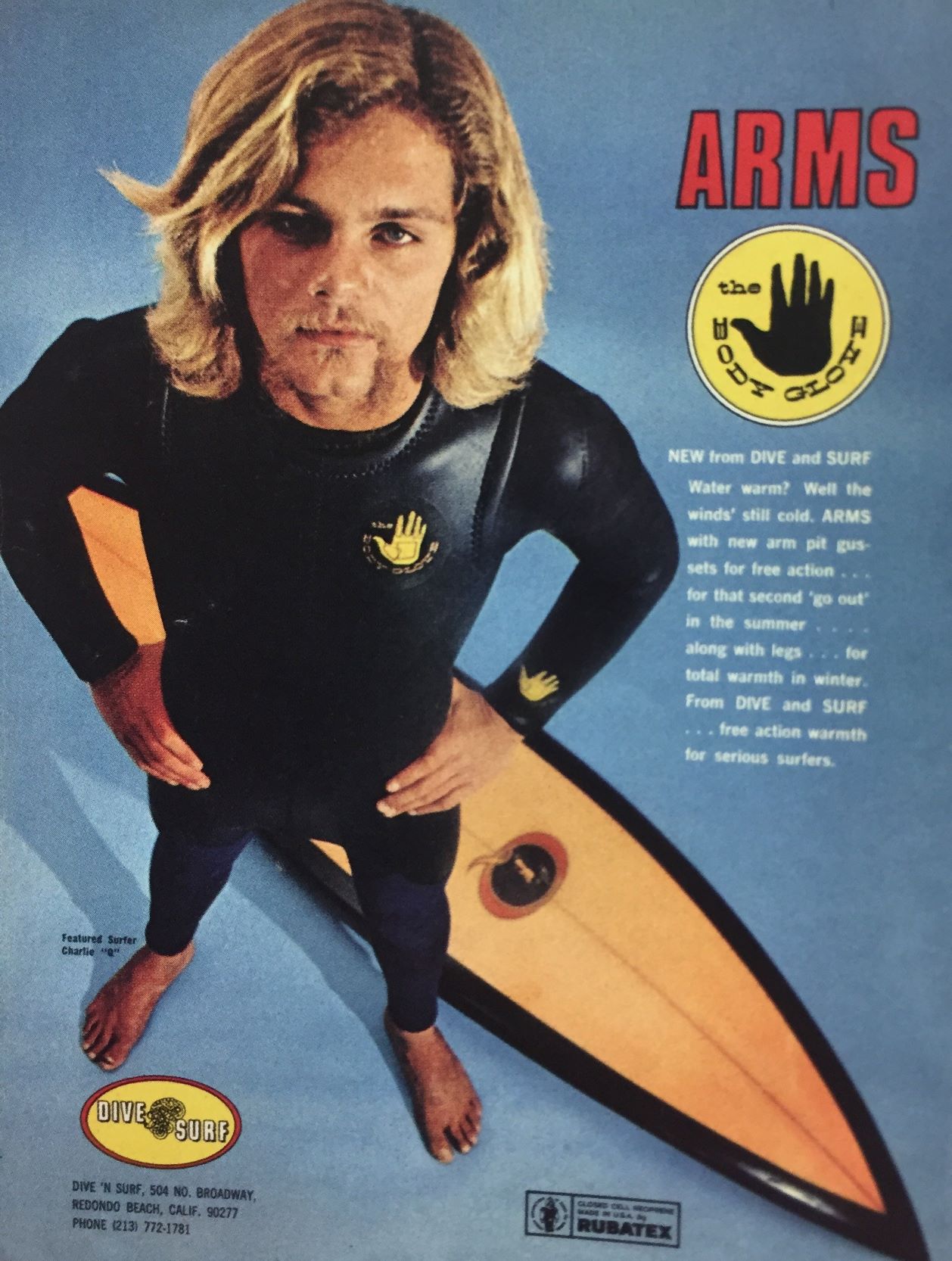 By the time he was in his teens, he was featured in surf industry ads because of his surfing ability, and his signature Fu Manchu mustache.

Quesnel has lived on Maui ever since that camping trip, except for two years, when Bing helped him set up Charlie Q surfboards down the street from Bing’s Hermosa Beach factory on Cypress Avenue.

For the past 20 years, he has helped clean up the sewage he surfed in on his first visit to Maui by serving on the board of Maui’s Surfrider chapter. In 2020, the U.S. Supreme Court ruled in favor of a lawsuit, spearheaded by his chapter, against the  Lahaina Wastewater Reclamation Facility. The precedent setting, decade long suit forced the county to stop injecting wastewater into the island’s groundwater. Dyes tests showed the contaminated groundwater was entering the ocean and damaging reefs.

“The county contended it wasn’t  subject to the 1972 Clean Water Act because it wasn’t discharging directly into the ocean. If the Supreme Court had ruled in favor of the county, it would have wiped out the Clean Water Act,” Quesnel said.

Quesnel practices what he preaches. He is the sales manager of Maui Pacific Solar.

“I haven’t paid a home electric bill in 13 years and have not bought gasoline in eight years. My solar system charges my electric car,” he said.

Quesnel will be introduced at the Hermosa Surfer Walk of Fame inductions by lifelong mentor and friend Bing Copeland.

That evening, Quesnel and his wife Sharon will leave from LAX for a return to Joyo’s Surf Camp at G Land, a series of challenging, big wave breaks on the tip of Java.  Quesnel, now 72, has made the trip twice a year for the past two decades. HBSWOF