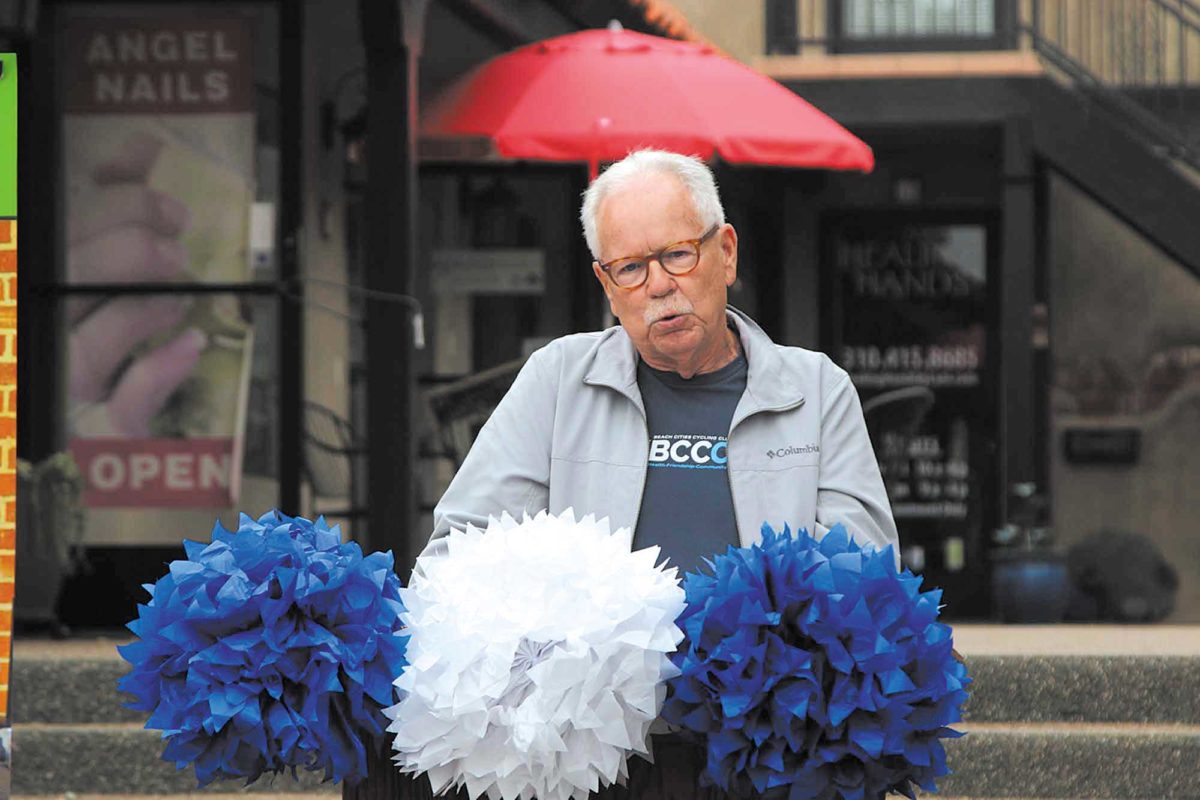 Jim Hannon of the South Bay Bicycle Coalition addresses a crowd gathered for the dedication of sharrows on Hermosa Avenue. Photo

A few years ago, while watching someone ride away from a bike shop on a new purchase, Jim Hannon had a surprising thought. Hannon is a retired engineer and member of the board of directors of the South Bay Bicycle Coalition.

“We all know that in high school, kids are eager to get their license. But they’ve got to do testing, take drivers ed to become a licensed motorist. We thought it was interesting that if you want to drive a bicycle on the road, the same roads that automobile drivers are on, there’s no requirement at all,” Hannon said.

Hannon is often thinking about bicycle safety, but lately, the topic has been on his mind even more, because of the coalition’s efforts on behalf of bicycle diversion programs. The diversion programs mimic traffic school options available to motorists who receive tickets for moving violations. Instead of paying the full price of a ticket, cyclists can take a bike safety class, and pay a reduced price or avoid fines entirely.

About 200 South Bay residents have graduated from the bicycle diversion program, a three-hour class on safe, legal bicycle riding. The focus is on violations cyclists commonly commit, such as failing to stop at stop signs. The coalition sees the diversion program less as a way to help bicyclists dodge tickets than as a way to encourage safer behavior on the road. National data indicate that more than 80 percent of fatal cycling accidents occur as a result of riding against traffic or riding on the sidewalk, habits common but illegal. Ironically, cyclists, especially newer ones, often think riding this way is safer than being a part of traffic. But it removes a key factor that drivers rely on in dealing with other cars, and makes cyclists safer too: predictability. (South Bay Wheelmen founder Ted Ernst led a movement in the late 1950s against the then-popular belief that it was safer to bicycle against traffic).

“Bicyclists, unfortunately, have gotten into some very bad habits. And those bad habits have just become the norm,” Hannon said. “Stop signs are the issue that most motorists have with bicyclists, and a lot of it is stupidity.”

Prior to 2016, cities in California were allowed to set up bicycle diversion programs only for minors. But the year before, Jerry Brown signed Assembly 902, which allowed the legislature to set up the programs for adults as well. The legislature cited an increase in cyclist fatalities nationwide, with a steep increase starting at the beginning of the decade, and California suffering more than any other state. Sacramento was also motivated by the changing nature of bicycling, with more adults using bicycles for recreation and commuting. According to the state legislative analyst, in 1978, adults represented only 21 percent of bicycle fatalities; by 2015, they represented 84 percent.

Although the bill opened new opportunities, it did not mandate that cities create such a program. As a result, nonprofit organizations such as the South Bay Bicycle Coalition and Bike East Bay have designed curriculums, and lobbied elected officials to approve diversion programs

That’s nothing new for Hannon, a former engineer. Nearly a decade ago, when Hermosa became the first city in the South Bay to implement “sharrows,” the cycle symbols stenciled on roads to remind motorists that cyclists have equal rights to the streets, Hannon helped the coalition collect figures on accidents in the first years after the sharrows were painted. data demonstrated significant drops in collisions, helping to make the case for sharrows elsewhere in the region.

After the law went into effect, coalition members sat down with elected officials and police chiefs from the 14 South Bay cities, and offered to help set up the program. Some were hesitant to embrace the new strategy.

“We kind of got the cold shoulder at first,” Hannon said.

Chief Keith Kauffman of the Redondo Beach Police Department was one of the first in the South Bay to embrace the new program. After rejecting it out of hand more than a year ago, Palos Verdes Estates is now warming to it. In June, after a presentation to Hermosa’s City Council, Mayor Stacey Armato asked City Manager Suja Lowenthal and Interim Police Chief Milton McKinnon to meet with Hannon. Hannon met with Manhattan Beach officials last week.

The coalition has found an eager audience in Commissioner Brad Fox, who handles traffic cases at the Torrance branch of the Los Angeles County Superior Court. Today, anyone who receives a bike-based moving violation and is assigned to the Torrance courthouse has the option to pursue the bike diversion program.

The South Bay’s pilot program in Torrance has been emulated throughout the state. But there is no link with information, or even a mention of the option on the L.A. County court website, so the coalition is reliant on getting people to try the system one ticket at a time.

It will take about a year to make a compelling data-based case for the program’s worth, Hannon said, but the coalition could do so faster if more officers recommended it. The coalition has given out hundreds of business card-sized flyers about the diversion program, and is asking police officers to pass them along when they ticket bicyclists. By comparing figures from police departments with enrollment numbers at the Torrance courthouse, the coalition has found that receiving one of the cards at the time of being ticketed makes a rider twice as likely to participate in the diversion program.

At the time the state bill was being drafted, legislators acknowledged it could result in an increase in cyclist tickets, but argued it was worthwhile. Its author, Assemblyman Richard Bloom (D – Santa Monica), said the bill would turn “a purely monetary penalty into a valuable educational opportunity, especially for people who would be unlikely to attend a bicycle safety class on their own volition.”

In speaking with police officers, Hannon said he found they have historically been hesitant to give tickets to cyclists because a person on a bicycle does not pose the same risk as a person driving a two-ton car. The option of bike diversion, and the ability to defray the fee, Hannon said, has let them feel less guilty about giving out tickets. But the threat of a penalty remains part of the solution.

“When you give someone a $248 ticket for not stopping at a stop sign, that’s a form of education, too,” he said. “What it doesn’t include is the why.”