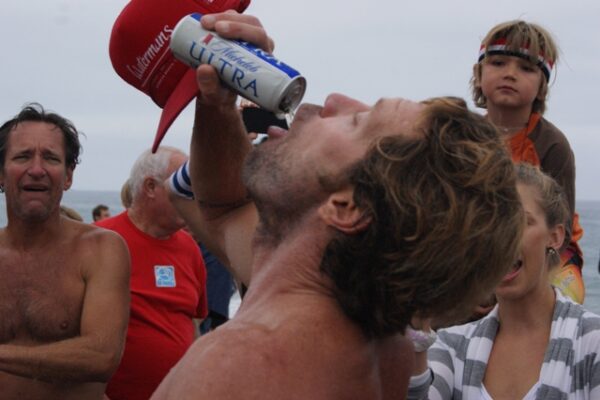 Ironman: run a mile, paddle a mile, pound a six-pack of beer. Every fourth of July morning, citizens of the South Bay descend upon Hermosa Beach to witness participants compete for the honor of the Ironman. To watch in adulation as shimmering muscle and blistering endurance are put to the test. To gape in awe and nauseous laughter as glistening vomit takes flight into the patriotic sky like fireworks erupting from the belly of Yellowstone National Park. To count themselves lucky as they avoid friendly fire shards of puke from Ironmen and women projecting their triumph onto one another in glory.

The South Bay on our country’s birthday resembles a beachy version of Bourbon Street during Mardi Gras; the magnitude of the insanity is almost more overwhelming than the excitement. One probably wouldn’t expect the chaos to kickoff with charity. Money derived from Ironman entry fees is traditionally redistributed to various foundations or funds; and this 35th year of the spectacle brought an unexpected surprise to a local band that’s become associated with the event.

Special C – Dustin Jones (guitar, vocals), Evan Pershing (bass), Jason “Bubba” McMackin (drums) – has supplied the generator-supported Ironman beach performance for two years running. This year, they also took their Punk and Reggae mix to the stage at Cafe Boogaloo, along with The Originalites and G.F.P., for the official after party, which they’d also organized as a fundraiser/food drive for the Veronica’s Legacy Foundation.

“I went to school with Veronica [Enriquez], she was my friend,” tells Bubba. “She was really awesome, she was crazy!”

Crazy about helping others. Veronica’s brother and Executive Director of VLF, Robert Enriquez, paints a picture of a woman who comes from the kindest of persons you could hope to have in this life.

“She was really something special …” he says, “a really kind-hearted woman … always helping out the homeless … worked for Harbor Regional and they did services for handicap people … also served as a one-on-one with autistic kids in the school district … and she would take it on her own time and money to gather during the holiday season food, toys and clothing for families in need.” She was also a cat rescuer, he adds.

Veronica passed away in 2008 due to repeated complications surrounding a tonsillectomy. The 3,000-year-old surgical procedure is one of the most commonly performed among children in the United States, and yet 33-year-old Veronica died tragically of blood loss in her South Bay residence. Robert, along with family and friends, erected VLF to honor her memory and attempt to fill the void of her goodwill.

“Special C is helping us with food drives … helping promote and fundraise,” says Robert. “They were friends of Veronica; she was pretty well-known in the South Bay.”

“We played it every year,” says Bubba. “The third year we kinda fell off the map … this year I wanted to get back in with them … brought them on for the Boogaloo show to help raise money and canned goods and cereal. To us it’s just giving back, but it’s personal to me.”

The phantom-like Ironman Committee caught wind of what Special C was doing, and in the Veronica-like spirit of giving they allocated $1,500 to VLF on behalf of the band.

Bubba says, “I was just floored, I didn’t know what I was hearing really.”

Robert “Burgie” Benz, two-time mayor of Hermosa Beach and city councilman from 1991-99 (who seems to be closely associated with Ironman), helped facilitate the donation. “Well, it comes down to this: we want to like donate it [the proceeds] to people that help – not only charitably, but that help get the event off the floor. Basically, those guys [Special C] just work their ass off, and God they do such a great job …”

“That was an unexpected surprise,” says Robert.

Tax deductible donations can be made to Veronica’s Legacy Foundation, Inc. through paypal (vero.vlf501c3@gmail.com). Special C will also be accepting food donations on behalf of VLF at every show. Don’t forget to pick up their split CD with Local Hate from their website: specialcrb.blogspot.com. VLF is currently searching for a local venue to hold their annual Viva Vero event in late September. For further information on the foundation and its mission visit facebook.com/VeronicasLegacyFoundation.