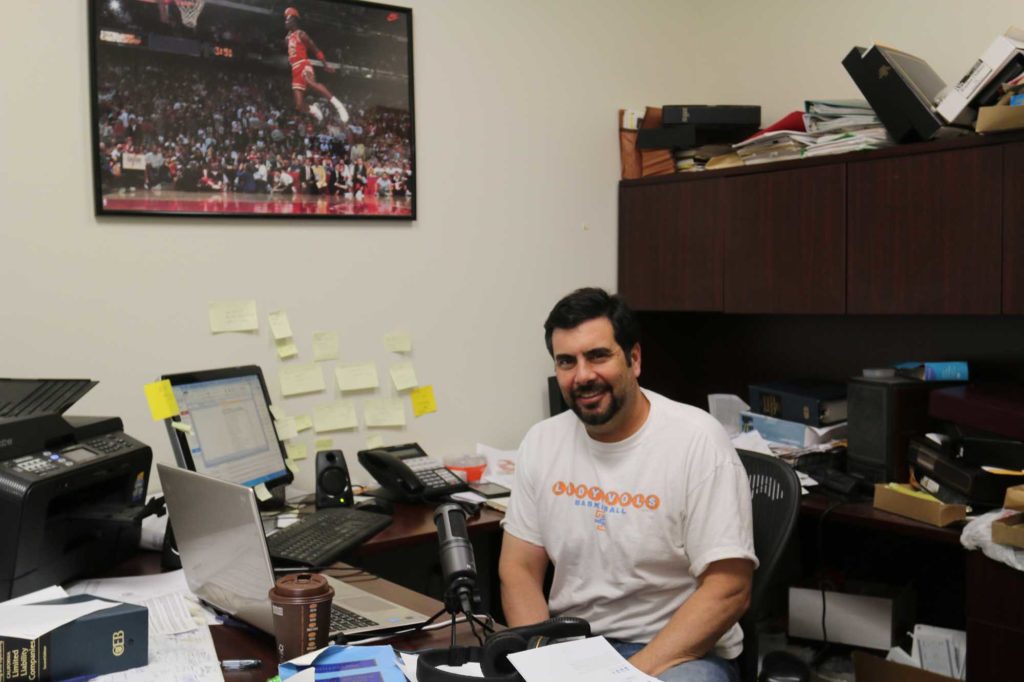 Attorney Brandon Chabner in his Hermosa office, surrounded by a poster of Michael Jordan and the microphone he uses to host a sports-themed Internet radio show. Photo by Ryan McDonald

In a typical day, Brandon Chabner might write a contract or partnership agreement, sticking to the staid language of the courtroom and the boardroom. Things get a bit looser in his free time when he pens comical, tongue-twisting taglines like “Yanked-out-of-first Yanks get taken to task again by Texas.”

Chabner is a Hermosa Beach attorney who also happens to have a started ChabDog Sports Blog, a website covering goings-on in college and professional sports. Since launching the effort has expanded to include an Internet radio show and podcast. And in the process, he has racked up a devoted following: some months the blog can get more than 100,000 hits.

ChabDog began three years ago when one of Chabner’s frequent comments on sports prompted a friend to suggest he start a blog. He said “Chab Dog” is a nickname with hazy origins, remembering only that it began somewhere on the golf course.

The blog and radio show maintain a fan-centric perspective, eschewing the professionalism of media outlets for a colorful take on the world of athletics.

“Definitely a little more colorful, a little more edgy than ESPN,” Chabner said, describing the attitude of the blog. “I obviously can’t compete with them because they’re so comprehensive, but I get to choose what I want to talk about. It’s what my audience wants.”

From barbershops to barrooms, sports are notorious for producing passionate disagreements, and Chabner said it can sometimes be a balancing act keeping things civil. But he said that he manages to mostly keep things lighthearted and that it hasn’t interfered with his law practice.

“I treat them with respect. But if someone is going to be unreasonable because I don’t like their team, I don’t think they would be a good client for me,” Chabner said.

“I do notice when that when I put content up about the Legends Football League with images, I start to see more people looking at it. I’d say that’s related to various factors,” Chabner said.

Tui Suiaunoa, the coach of the LFL’s Los Angeles Temptation, is a frequent guest on Chabner’s radio program. Suiaunoa is a former Carson High standout and was a member of the El Camino College Warriors national championship team from 1987.

Suiaunoa is sometimes the target of good-natured ribbing from Chabner — Suiaunoa is a Raiders fan, and Chabner ”drills me on that, ” the coach said — but he appreciates the attention that Chabner’s show is able to bring to local athletes. (The Temptation now hold their practices in Lomita, but formerly used Hermosa’s Clark Field.) He said that the program helps highlight a level of play that would surprise people who have never seen a game before.

“The girls have to be able to play at the level of men. Otherwise, no one’s going to be interested for very long,” Suiaunoa said. “What brings fans to the games is the uniforms. But what keeps them in the seats is the game.”

Chabner is originally from New England and maintains his allegiance to teams from the Right Coast, a perspective that often emerges on the radio show.

“I like the LA teams, but can’t emotionally get too involved with those teams. They’re not my first affiliation, and I just can’t do that. The Lakers have always been the archenemy for me because I’m a Celtics fan. I’ve been enjoying this period where the Lakers are struggling,” Chabner laughed.

The perspective works in part because much of his audience is based in the South Bay, and it resonates with the large number local transplants. Frequent commentators on the radio show include Frank the Angry Mets Fan, and Marc the Cabbie from Boston.

Eric Sauve is Chabner’s co-host for ChabDog Sports Talk. (Sauve is responsible for the show’s frequent use of humorous sound bites, a tactic he picked up from splicing tape while working at his college radio station.) A former South Bay resident who now lives in Newport Beach, Sauve agreed that the program benefitted from the fact that the area is host to a wide range of team allegiances.

“It’s funny: that’s not necessarily how we intended it to be,” Suave said. “But as friends and family from all over the country listen to us, and local people also tune in, that has happened. The market here is so fluid, and I don’t know that the same thing would happen if we were living in the Midwest.”