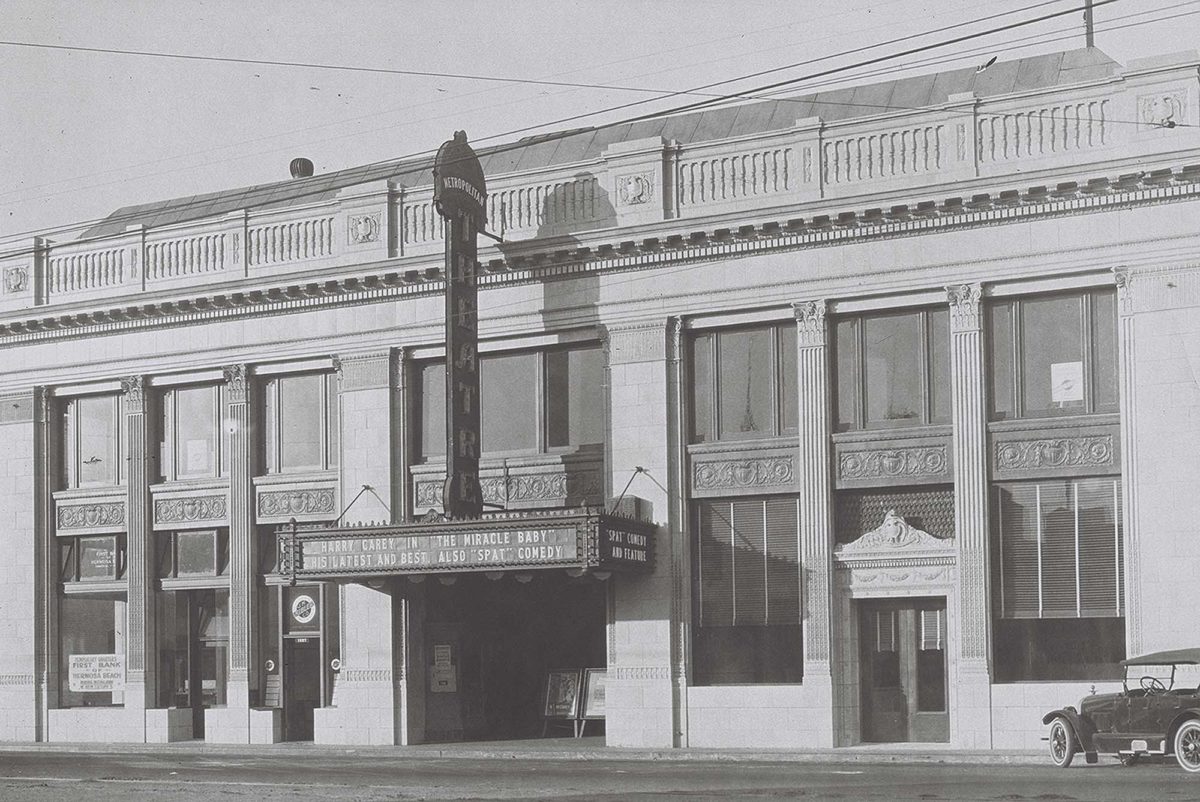 When the Bijou Theater in downtown Hermosa was named The Metropolitan when it opened in the 1920s. Photo courtesy of the Hermosa Beach Historical Society

April Wright attends an exercise class at the Bar Method in downtown Hermosa almost every day. In between dips and plies, she marvels that she is taking a class inside a building that once housed a movie theater.

The Hermosa resident is the filmmaker behind “Going Attractions: The Definitive Story of the Movie Palace,” which screens Friday night at the Hermosa Community Theater. It’s part of the kickoff of the Hermosa Beach Historical Society’s new exhibit dedicated to the Bijou Theater, which opens Thursday at the Hermosa Beach Museum.

Wright’s documentary premiered in Los Angeles in October. It includes footage and photos of movie palaces past, including a previous incarnation of the Bijou and the former Fox Theater in Redondo Beach. While the Fox was demolished in the 1970s and the Bijou closed some two decades later, the latter is one of few buildings protected under Hermosa’s historic preservation ordinance. And while the credits no longer roll and the marquee is long gone, much of the building’s guts remain intact — enough for Wright’s fellow exercise class attendees to bridge the gap between present and past with their imagination.

“Sometimes, I’ll tell people, You know this was a movie theater. And a lot of people, it just doesn’t occur to them,” Wright said. “But if they look around, they’ll start to see it. There are a lot of former theaters hiding in plain sight.”

After opening as The Metropolitan, the theater became known as the Hermosa, the Cove and finally the Bijou, and played host to newly released films, perennial classics like the Rocky Horror Picture Show, and the occasional concert, including a notorious punk rock show featuring the band Redd Kross.

Wright’s research for the film showed her that other theaters throughout the country have had similar odysseys. Many once-grand spaces were built at a time when movie attendance was far higher — her film cites critic and film historian Leonard Maltin as saying that in the 1920s the average American attended four to five movies per week — only to fall into disuse and disrepair amid changing economic trends. Some have been demolished, but others, like the Bijou, have been reimagined.

The effort to remember the former theaters, Wright said, is part of the influence they have on our sense of place. She recalled walking in downtown Manhattan Beach recently and seeing a plaque honoring the La Mar Theater, which closed in the late ‘70s, on the new Skechers offices on Manhattan Beach Boulevard.

The Historical Society’s exhibit will feature objects charting the evolution of the Bijou and records of the people who attended its offerings, and made them happen. The Historical Society describes the Bijou as “one of the oldest buildings in Hermosa,” and it’s not just Hermosa real estate that has changed since the Bijou became home to a bank and exercise studio. The entertainment industry has changed too. Cable, VHS and DVDs each diminished the share of the nation’s attention span and entertainment budget occupied by movie theaters over the years. The rise of streaming services like Netflix and Hulu represents a new level of threat to communal viewing.

As a filmmaker, Wright said she is encouraged by many of the creative shows and movies emerging from streaming services, but worries they promote a certain amount of sight-lowering.

“Just think about the words we use to talk about movies in theaters: ‘magical,’ ‘larger than life,’ ‘on the big screen,’” Wright said. “When we talk about streaming, we call it ‘content.”

The historical society exhibit has some of the trappings commonly associated with theaters, including plush seats, film reels, projectors, and the gold polls and velvet ropes once used to mark off concession lines. It also has signs of the building’s gradual decay, including a chunk of the ceiling that caved in during the theater’s final days.

The theater went up in 1923 as Hermosa was booming, growth propelled by the area’s expanding manufacturing sector. In a nod to that industrial past, the exhibit includes the whistle from the smokestack of one of the nearby silk factories.

The theater is closely connected with the family of Rick Koenig, the president emeritus of the historical society. His grandfather built it, and another relative financed the construction, and portraits said Jamie Erickson, the administrator of the Hermosa Museum; photos of each feature in the exhibit.

Along with the physical artifacts the exhibit includes, it also will feature a screen showing videotaped interviews Erickson conducted with members of the community as they recount their experiences with the Bijou. The exhibit will feature a notebook in which people will be able to write down recollections about the theater, which will later be typed up and included in the museum’s archives.

“It’s a chance for people to be able to share their experiences, or just something that makes them smile,” she said.