How do you say ‘Retro’ in Spanish?* 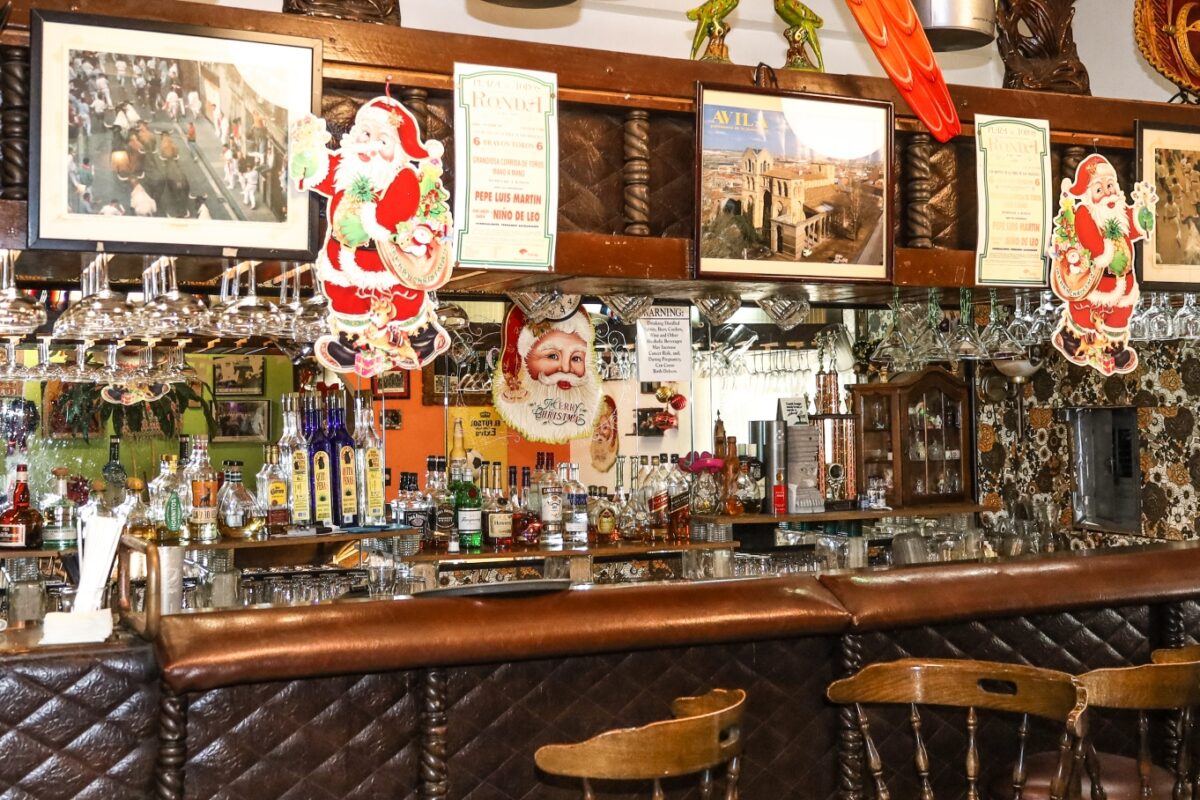 Overhanging racks of wide bowl, long stemmed margarita glasses at the Las Brisas bar are a testament to the drink’s popularity there. Photo by Kevin Cody

Las Brisas in North Redondo looks just like it did last time you were there, no matter how long ago that was.

I took my sister-in-law for dinner at Las Brisas, and she did a double-take after we were seated. “This place looks exactly the same as it did when I was here for my baby shower,” she exclaimed. That baby is 31 years old now, but very little has changed at Las Brisas except the prices on the menu.

The restaurant has roots that are even older. It was called El Dorado when Orlando Gutierrez opened it in the 1960s. When his daughter Paula Islas took over in 1972 she renamed it to Las Brisas. That’s a popular name for Mexican restaurants, and there is a San Pedro restaurant that dares to call itself “The Original Las Brisas.” That one was founded in 1982, when Redondo’s Las Brisas had been serving for a decade, so if anyone has a claim to the word “original,” it’s this one. The Redondo location is run by the third generation of the family, led by Dante Gutierrez, and he evidently likes to keep things just the way they are. They don’t actually use the ancient manual cash register that sits by the hostess stand, but removing it is probably unthinkable. 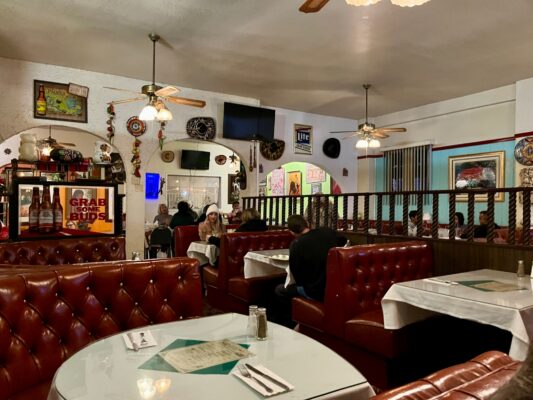 The dining area at Las Brisas is a cantina classic. Photo by Richard Foss

The decor is old school cantina, plush burgundy booths in a room festooned with beaded sombreros, folk art pottery, beer signs and mirrors, and the inevitable image of a bullfighter. The menus are on wooden backings, which is another archaism, and they are curiously incomplete. Starters are displayed only on a separate page that is under the glass on the table, meaning that only one person at the table has a good view — everyone else reads them upside-down or sideways, or does the smart thing of taking a picture with their phone and choosing from that. There is no alcoholic beverage menu at all, which is even stranger – they have a full bar and most people order margaritas or beer, but without knowing the price unless they ask.

Almost all meals come with soup or salad, and from observing a few being served we knew the portions are ample, but we ordered their “Big ‘Ole’ Quesadilla” anyway. It’s the gringo jack and cheddar mix instead of the Oaxacan cheese you’d get in a more traditional place, with crumbled bacon, onions, tomato, and jalapenos inside, and it’s a nice way to start a meal. It’s topped with their guacamole which is on the bland side, mostly avocado and citrus with little zip or character.  It’s good as an antidote to the spicy, thin salsa that arrives with their chips, but it’s not my favorite guac in the South Bay.

Most people at our table ordered salads, but I had the chicken soup with fideo noodles, a recipe that goes back to the Spanish conquest. Fideo is like short spaghetti and may have been introduced by Arabs in the middle ages, and it’s curiously rare in local restaurants. The broth here was flavorful and a little spicy, though somewhat oily. On previous visits I’ve tried their cactus soup, which I recommend a bit more highly and is also a rarity. 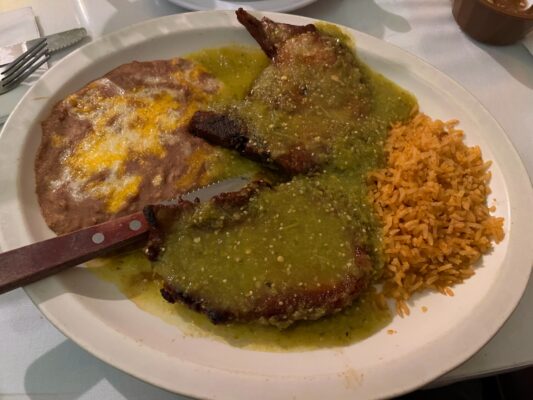 Thje pork chops in green chile are tasty, but not as tender as they might be. Photo by Richard Foss.

For main courses I had pork chops in green chile sauce, while my brother selected a red chili plate. You won’t see a red chile plate on the menu, just a red chile burrito, but it’s always available if you ask. The red chili has shredded beef in an unexpected sauce with overtones of cinnamon and cumin, and is highly recommended if you like it hot. The sauce on the pork chops was only slightly less spicy, and had a fine balance of heat and tart tomatillo flavor. Unfortunately, the chops themselves were rather tough, and since this is the same sauce used in the chile verde I’d probably order that next time, since the slow-cooked meat is undoubtedly more tender.

My wife ordered a combo plate with a chicken tamale and a carnitas burrito, while my sister in law had a taco, beef enchilada, and carnitas burrito plate. The tamale arrived unwrapped and covered with sauce, and if we had known it would be served that way we’d have asked for it without them, since they smothered the flavor of the chicken. The masa wasn’t quite as fluffy as some I’ve had, but some people prefer the denser style that’s served here. The carnitas was mild in flavor and very moist rather than chewy, again a matter of regional style and personal taste.

My sister-in-law’s plate came with an American fast food style crisp taco with lettuce, and that cheddar and jack blend, which taken as a whole is something people in Mexico don’t regard as an actual taco. To Americans it’s as alluring as ever, and this one was as good as it was inauthentic. The cheese enchilada was standard, and doused with the same mildly spicy brick-red sauce that was on the tamale. All plates come with rice and beans that are topped with cheese, and are a plate load of food.

We paired our meal with regular and Cadillac margaritas, which are offered blended style or on ice. They make them well with full pours of liquor but not overly strong, and I’m guessing that they have a lot of practice since that’s what I saw on most tables. They seem to have only coffee, tea, and standard soft drinks – it would be nice for those who don’t drink  alcohol if they offered housemade horchata or jamaica.

The only desserts offered are ice cream and flan, but every time I have eaten at Las Brisas I have been too stuffed to contemplate it. This was no exception, and we left as full and happy as usual.

With the recent closure of Leo’s, Las Brisas is probably the oldest Mexican restaurant in the South Bay, and their recently renewed lease means we will have them around for at least another five years. For those who like their Mexican food old school, that’s good news. Purists and modernists may look elsewhere, but even they might have a crunchy taco and a red chile burrito while nobody is watching.

*And by the way, in case you didn’t know – the answer to the question at the top of this column is ‘Retro’. Pretty easy, really.