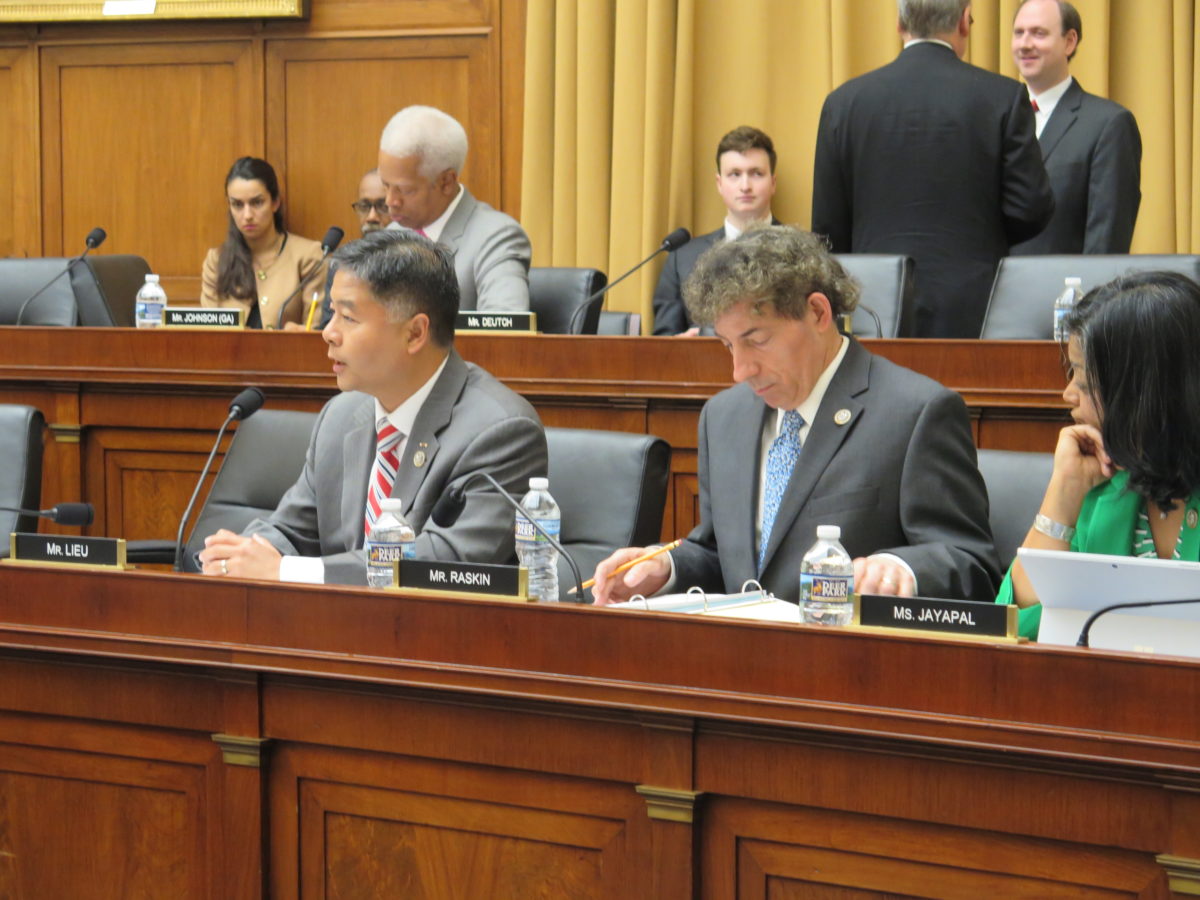 Rep. Ted Lieu, who represents the South Bay in Congress, at a hearing in the House Judiciary Committee. Photo by Ryan McDonald

In May of 2017, around the time of the announcement of the appointment of Robert Mueller as Special Counsel to oversee the investigation into Russian interference in the 2016 election, Rep. Ted Lieu tweeted a photo from his desk in the House Judiciary Committee.

“This is the House Judiciary Committee,” the Tweet read. “Fun fact: if there are impeachment proceedings, this is where it would start. Just sayin’.”

With Speaker Nancy Pelosi announcing a formal impeachment inquiry last week, Lieu, a Democrat whose district includes much of the South Bay and is one of President Donald Trump’s most strident critics, remains close to the action.

The inquiry was spurred by revelations over a whistleblower complaint stemming from a July 25  phone call between Trump and Ukranian President Volodymyr Zelensky. Earlier in the month, Trump had ordered the suspension of hundreds of millions of dollars in congressionally approved military aid to Ukraine. According to a transcript of the call released by the White House, after Zelensky inquired about the aid, Trump responded “I would like you to do us a favor though,” before asking Ukraine to look into Crowdstrike, a cybersecurity firm that linked hacks of Democratic National Committee email accounts during the 2016 election to Russians.

Later in the conversation, Trump urged Zelensky to investigate Hunter Biden, the son of Democratic presidential candidate Joe Biden, over the former’s role in a Ukranian energy firm.

Pelosi opened the investigation after months of resisting calls from other Democrats to pursue impeachment for other perceived misdeeds. Lieu was among those raising the issue early on. In a May op-ed in USA Today, Lieu said that the administration’s refusal to respond to subpoenas related to Attorney General William Barr’s handling of the Mueller report on Russian interference could force Congress to begin impeachment proceedings as a way to gather further information.

The investigation, announced Sept. 24, has so far been centered on the whistleblower complaint, which is being examined by the House Intelligence Committee. But Lieu, as a former prosecutor, has been a sought-after voice on the potential charges on which the president could be impeached. Asked to explain the concept of “quid pro quo” on C-Span last week, Lieu said, “Donald Trump had halted aide to Ukraine that Congress had specifically approved because it was going to help our national security interests.”

And the fast moving investigation has continued to evolve in ways that could enhance the Judiciary Committee’s role. On Tuesday, Lieu again accused the administration of stonewalling, this time for its response to the Ukraine whistleblower investigation, and has raised the possibility that the potential articles of impeachment would include obstruction of justice, a charge included in the impeachment proceedings against both Richard Nixon and Bill Clinton.

“As I’ve said before, we’re in the midst of a constitutional crisis, and we must use the full force of the Constitution to resolve it,” Lieu said.