Incumbents ahead in Redondo Beach election 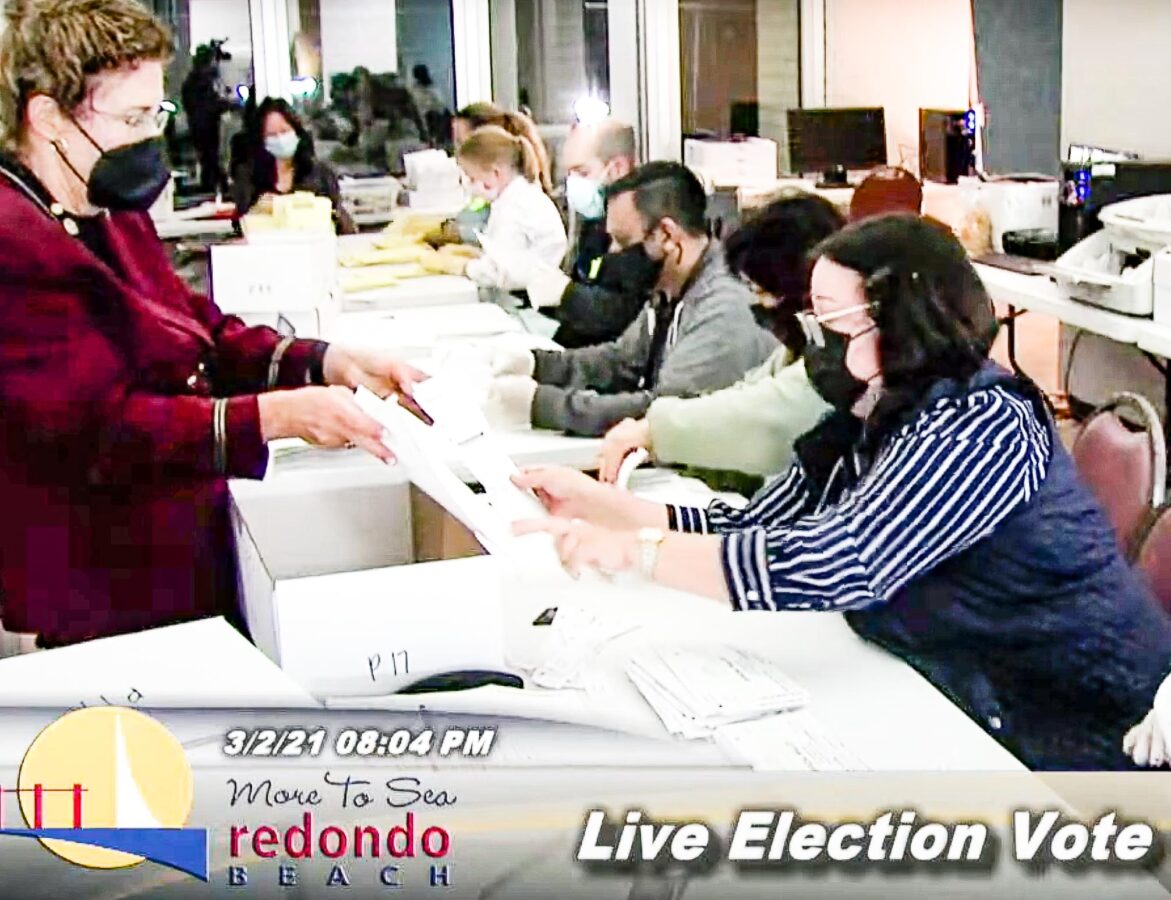 If preliminary results hold, only the board of the Redondo Beach Unified School District will change as a result of this week’s citywide election. Less than half of ballots cast were counted before unofficial numbers were announced, at 11:11 p.m. on Tuesday. According to those numbers, incumbents are ahead in the races for mayor and city attorney, as well as council members in Districts 1, 2, and 4. None of the three school board members whose terms expired ran for reelection because they were termed out.

“Other than for District 4, it’s been a blowout for the incumbents,” said Mayor Bill Brand, who captured 68 percent of the preliminary vote in his reelection bid. Council District 1 incumbent Nils Nehrenheim, who received a majority of his district’s votes according to Tuesday’s count, expressed a more measured view.

“The first set of votes that come in always skews very conservative, toward incumbents,” he said. “The second count usually skews toward the challengers. We track this stuff. … There are a lot of votes that still need to be counted. It will probably be close, a lot closer than we know.”

Votes were cast only by mail. Polls were closed because of the pandemic. Ballots will be counted if they were postmarked by the day of the election, which means Friday is the earliest possible day for a final count. 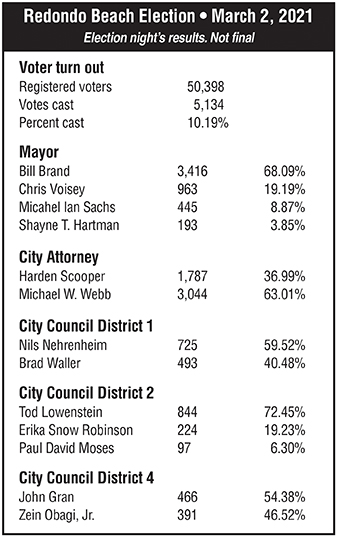 At this point, it appears highly likely that the race for mayor will go to Brand, who served two terms on the city council before winning his campaign for mayor in 2017. Challenger Chris Voisey registered 19 percent of the counted votes, Michael Ian Sachs got about 9 percent, and Shayne Hartman got nearly 4 percent.

“It’s been a very tumultuous year with the Covid pandemic and budget cuts, and I think [voters] are looking for people with experience to continue to guide the city,” Loewenstein said. “Incumbency is a powerful thing.”

Erika Snow Robinson won 19 percent of the preliminary count in District 2, and Paul Moses garnered just over 6 percent. In District 4, incumbent John Gran received 54 percent of the votes counted Tuesday to Zein Obagi’s 46 percent. The morning after the election, Gran described the results as bittersweet.

“I’m very disappointed that we had an election in an off-cycle because we had such low turnout,” Gran said. “Only people who were really motivated went out and voted. I’m happy with the preliminary results, don’t get me wrong, I just think it’s a really sad day for Redondo Beach, quite frankly. … People that are angry or loud show up at low turnout elections like this one. Happy people don’t get out and vote. I don’t want to be bitter but I’m just really disappointed in our city having an off-cycle election because I don’t think that our citizens were represented well.”

Brand, Nehrenheim, and Loewenstein often refer to themselves as a team, knit together by a desire to oppose overdevelopment. They endorsed Obagi, Gran’s challenger.

“Our team — Bill, Todd, and I — has worked really hard to fix the problems that prior council people created for us,” Nehrenheim said. “John agrees with the prior council, and that’s why we worked so hard to get Zein to win. There’s a 50-50 chance of that happening.”

“There are a lot of opportunities before us — we’re retiring the power plant and along with it, the power lines, remaking Artesia Boulevard, redeveloping the Galleria, extending the Green Line down Hawthorne Boulevard, revitalizing the waterfront without supersizing it, permanently reconfiguring the Riviera Village,” he said. “It’s been like turning the Titanic around, but it is turning. I’m referring to the path Redondo Beach has been on since I’ve been paying attention, for 20 years, to rubber-stamp projects and developments no matter how big. … I think [the results show that] citizens have had enough of the overdevelopment of their towns.”

Mike Webb, who began working for the city as a prosecutor in 1994 and was first elected as city attorney in 2004, led with 63 percent of the votes counted Tuesday. Challenger Harden Sooper captured 34 percent. 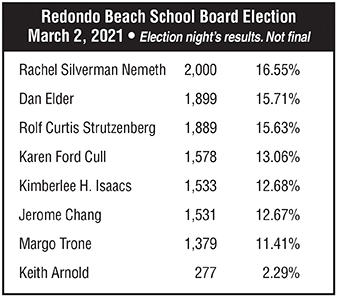 Three positions on the board of the Redondo Beach Unified School District appeared on the ballot this year, as the seats occupied by Raymur Flinn and David Witkin do not become vacant until 2023. Rachel Silverman Nemeth won the largest percentage of the votes counted Tuesday, with 16.6 percent of the total. Dan Elder received 15.7 percent of the total, followed by Rolf Curtis Strutzenberg with 15.6 percent. The next candidates, in order of the number of votes they garnered, were Karen Ford Cull, Kimberlee Isaacs, Jerome Chang, Margo Trone, and Keith Arnold.

Officials elected during this election will remain in office until March 31, 2025. ER