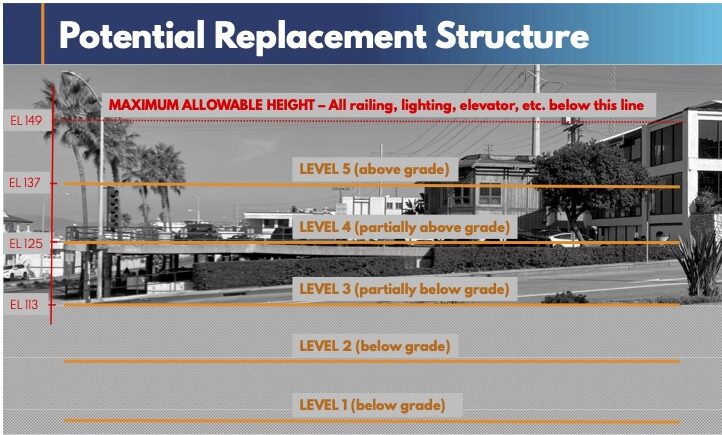 The City of Manhattan Beach is considering a new, expanded parking structure at Highland and Rosecrans.

The City Council is considering doubling the size of the parking structure at Rosecrans and Highland avenues, expanding the existing two-level, 77-spot facility to a five-level, 140-spot garage.

The matter was on the agenda at the Council’s November 14 meeting. A report was given by Jeff Fijalka, a senior civil engineer for the City, but council members demurred talking publicly about the matter, likely because the project is adjacent to the proposed Project Verandas. Three lawsuits have been filed against the City regarding the Project Verandas. The council  last month rejected Project Verandas, a 79-unit residential project, in a 3-2 vote due to environmental concerns regarding the proximity of the Chevron refinery.

Mayor Steve Napolitano, who cast the deciding vote against Verandas, asked his colleagues to discuss the parking garage in closed session.

“I am going to say right now that perhaps we need to have a closed session on this item in the near future,” Napolitano said.

The staff report projected the parking structure project’s cost at $9.5 million and proposed two, new subterranean levels, and a fifth level at the maximum height allowed by state law, 30 ft. above the average grade on the site.

“We anticipate that we could have three levels above the Highland Avenue street grade, which would be one additional level above the existing —  what we call level two, on the structure that’s there right now,” Fijalka said. “We’re proposing that a new structure could feasibly contain additional levels below grade, below the Highland Avenue street grade.”

Peter Kim, the owner of Sloopy’s and president of the North Manhattan Beach Business Association, implored the Council to move forward with the project.

“You guys all know we need more parking,” Kim said. “I was looking at some statistics and I spoke to a couple of landlords. I don’t know if you guys are aware, but north of the Fishbar, 99 percent of the businesses are empty. And the main reason why those businesses are empty is because nobody wants to come in when there’s no parking.”

Resident Stefan Kampe questioned if the parking need is worth the cost and suggested further analysis.

“Everybody says we need parking, but how much, and for whom is what I am interested in knowing,” Kampe said. “You get what you measure. So we should define okay, we’re short X number of parking spots in North Manhattan. For what purpose? Is this going to achieve our goals or not? …Secondly, when you do the math, those additional parking spots come out to about $150,000 per spot. So the question then is, what is the return on that, and how long is that return on investment going to come?”

City Manager Bruce Moe, prompted by a question from the mayor about vehicle parking districts, said the existing structure was built 30 years ago, and financed by the businesses themselves through such a parking district.

“The North End is a prime example because that parking structure was built by assessing the businesses for that facility that was constructed,” Moe said. “And so that’s a financing option that’s available to us as well going forward.”

“Again, we’re talking about businesses that don’t exist, basically in El Porto,” he said.  “We have empty lots, empty businesses, empty buildings north of Fishbar on the North End, both on the east and west side…So we’re probably talking 15 or 20 businesses that could come in if we have this parking…I think expanded parking addresses a couple of things, parking for residents as well as for businesses. And that’s where the revenue will come from.”

“Without objection, we’ll carry it over to a future meeting,” Napolitano said.

The Project Verandas developer was among those to file suit against the City for its denial of the project, which because it included six low-income units qualified for a streamlined, non-discretionary approval process under state law. Michael Shonafelt, an attorney representing Project Verandas, said the parking structure wasn’t particularly relevant to the lawsuit. What mattered, he said, is what the City has already done.

“We just play by the rules and comply with the law,” Shonafelt said. “It’s too bad the City couldn’t do the same, and there are consequences when a city does not. Cities are not fiefdoms unto their own.” ER