Joyful Noise: not much joyful in this noise [MOVIE REVIEW] 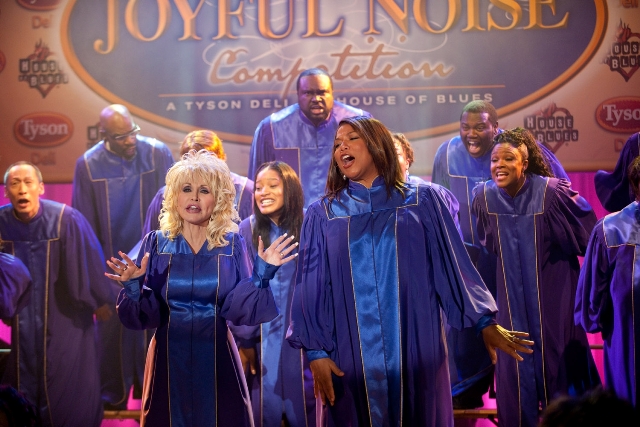 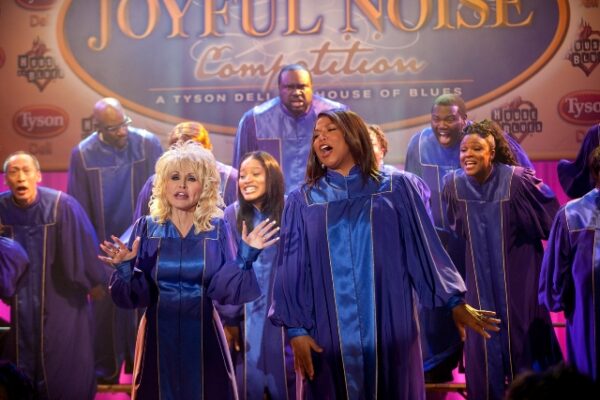 To say that “Joyful Noise” is a joyful mess would be giving the film too much credit. That is not to say that there isn’t merit in many of the songs or in the singing because there is, but generally, from start to finish, “Joyful Noise” is trite, predictable, unrealistic and leaden.

The Pacashau Sacred Divinity Choir of small town Georgia is dealt a major blow when their choirmaster, Bernard Sparrow, dies of a heart attack during a practice to the run up for the regional finals of the Joyful Noise gospel competition. When Pastor Dale announces to the group that Vi Rose Hill, assistant choirmaster, will be promoted to choirmaster instead of Sparrow’s widow, GG, the church’s primary financial angel, fur flies. Vi Rose has always been extremely resentful of GG – her money, her manner, her big city plastic surgery-enhanced appearance and her troublesome family. But that’s just the beginning because when GG’s bad boy grandson Randy arrives from New York, he and Olivia, Vi Rose’s daughter, take a shine to each other. Adding insult to injury, the choir loses the regionals again to their rival the Holy Vision Church of Detroit. Their loss is greater than they could have imagined, however, because Pastor Dale decrees that the church can no longer support their efforts and their singing must be confined to Sunday services. But, miracle of miracles, Holy Vision Church is disqualified and it is the Pacashau Sacred Divinity Choir that is invited to the national finals in Los Angeles.

There’s actually no need for me to fill in any of the blanks because you can already figure out the conflicts and resolutions – who wins, who loses, who changes, who comes back – it’s been done before, and frankly, I can’t think of anyone who hasn’t done it better. But actually, the first question that came to my mind was, “when did the rural South become so incredibly well-integrated with all the white folks, Asians and the black folks living so harmoniously during the hard times (or any times, for that matter)?” Pacashau is supposed to be a hard-hit community with most of the citizens out of work; those who aren’t out of work are manning the soup kitchen feeding those in need (a veritable rainbow of well-scrubbed ethnicities). Vi Rose, representing the have-nots who have to work two jobs to keep food on the table for her beautifully dressed, well-kempt children, lives in a house that doesn’t look substantially different from that of GG, with the exception of one piece of peeling paint on a door frame. Keeping things youthful, Vi Rose and GG are not the only ones with a competitive rivalry; Randy is also set upon by Manny, the local player who has always had his eye on Olivia. Their fist fight was inevitable from the moment Randy arrived in town and even it is a disappointment. It’s not so much that we already know who the winner will be, but Manny is such a coward that you have to wonder on what planet the director grew up that bullies were so easily tamed. Even more predictable is how Randy convinces Manny to join the choir and use his amazing electric guitar skills to liven things up. Equally disappointing was the food fight between Vi Rose and GG, a moment that should have been hilarious but, due to poor choreography and pacing is just, well, a couple of older women throwing biscuits at each other.

It would be too easy to fault the actors, all of whom have been better in other things. Queen Latifah (Vi Rose) certainly has her moments and can definitely sing. Dolly Parton (GG) is a personality too big for any screen who can sometimes be depended upon if she is playing Dolly Parton; just not this time. Her acting is as stiff as her singing and songwriting are superb. Kris Kristofferson (dead husband Bernard) in the smallest role for the biggest billing would have been better off taking one of those “who was that” uncredited cameos. The years have not been kind to either his face or his voice, of which nothing is left. Jeremy Jordan (Randy) is another beautiful voice with nowhere to go; and Courtney B. Vance (the pastor) looks like he’d rather be elsewhere. And why would anyone cast Jesse L. Martin (Vi Rose’s absent husband Marcus) in a role where he doesn’t get to sing?! Instead, his limited screen time is restricted to making him look uncomfortable.

There is one shining light in this unholy mess and that would be Keke Palmer (Olivia). Beautiful, graceful and pensive, Palmer was somehow able to find nuance when none was present. Palmer’s performance and talent will stay with you.

But, in reality, none of the fault lies with the unfortunate actors who did the best they could with the material they had to work with. The guilty party is Todd Graff who doesn’t know how to construct a story, let alone execute it. In other hands, a credible rivalry between a frivolous rich white woman and a less fortunate, self righteous bible spouting black woman might have worked; not here. Instead we are given the older hip, rich white woman who is nothing but kindness to everyone and the poor struggling black woman (struggling because we’re told she’s struggling, not because there are outward signs) who is mean-spirited and rigid and always wrong. I guess someone should have told Graff to just shut up and let them sing.

Opening Friday, January 13 at the ArcLight Beach Cities and the AMC Galleria.

Neely also writes a blog about writers in television and film.