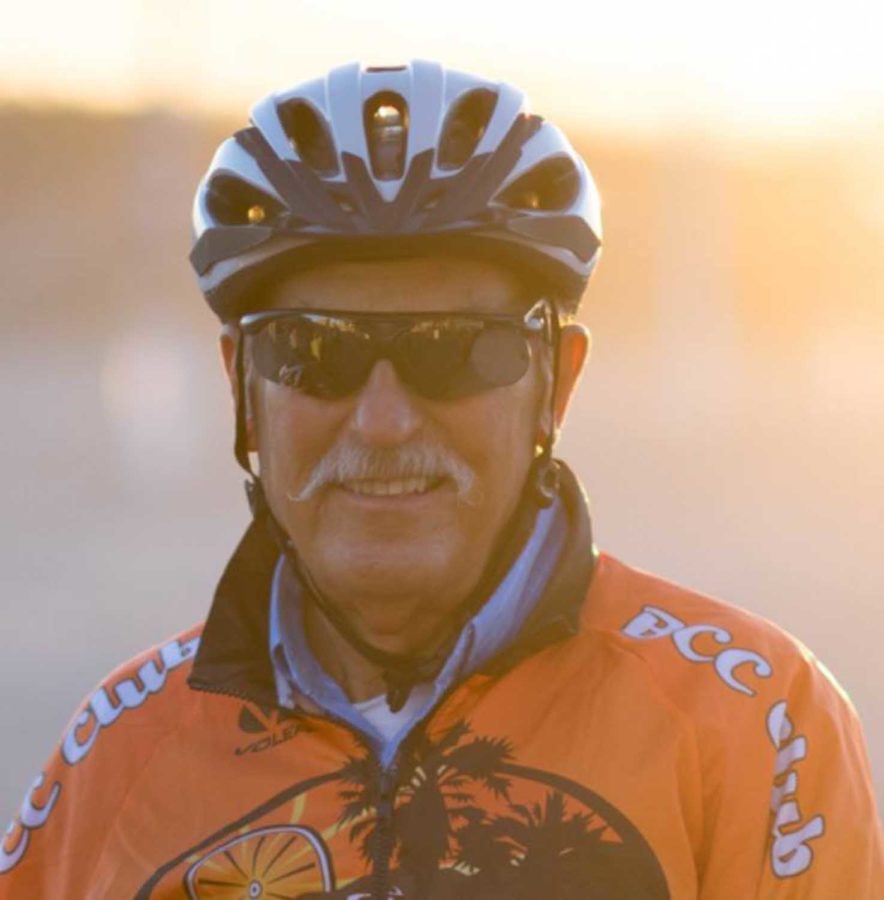 The cyclists had a tough road to climb. In 2010, the El Segundo City Council was holding a hearing on the South Bay Bicycle Master Plan, and members of the audience were urging rejection. Not enough people rode bikes, the skeptics said, to justify approving the plan, especially not senior citizens.

It was at that point that the South Bay Bicycle Coalition deployed their “secret weapon,” 80-year-old board member Julian Katz. Katz stepped up to the microphone and, without a drip of malice in his voice, said, “Hello, I’m Julian Katz. I’m a senior citizen, and I ride a bicycle. So now you’ve met a senior citizen who rides bikes.”

Todd DiPaola, a Manhattan Beach resident and former president of the coalition, shared the story Sunday morning during a memorial bike ride for Katz. The Hermosa Beach resident passed away last week due to complications from prostate cancer. He was 88.

Friends, family, and colleagues recalled Katz as a dedicated but mild-tempered volunteer and advocate, one whose energy and commitment will be tough to follow and certain to inspire. After he retired from a career as an engineer designing landing gear for aircraft, Katz poured himself into public service. He served two terms on the Hermosa Beach Public Works Commission and was president of the Hermosa Beach Lawn Bowling Club.

But it was as an advocate for cycling infrastructure that Katz truly shined. He was a constant presence at meetings in cities across the South Bay, and an essential voice in securing approval for the bicycle master plan, which seven cities adopted by 2011.

The fruit of his labors got a vivid demonstration Sunday morning during the memorial bike ride. Dozens of cyclists enjoyed a sun-soaked ride down Hermosa Avenue and The Strand as Frank Sinatra, a Katz favorite, wafted from a stereo-mounted bicycle. In the end, dozens of cyclists gathered at a bike corral on Hermosa Avenue near 10th Street that is tentatively slated to be renamed in Katz’s honor. Bike riders of all ages whizzed by as people spoke, sharing the road thanks in part to “sharrows” — signs stenciled on sections of road reminding motorists that the California Vehicle Code gives cyclists equal rights to the road — that Katz helped make a reality. Jim Hannon, a friend of Katz and a board member of the bicycle coalition, said that studies by traffic engineers indicated that the installation of sharrows on the street was responsible for “huge reductions” in injury-accidents.

Katz’s efforts to promote safety became part of his identity even in non-cycling circles. At a memorial service held last week at Congregation Tikvat Jacob in Manhattan Beach, Rabbi Joshua Kalev recalled seeing a documentary about Gino Bartali, a two-time winner of the Tour de France who used his status as a renowned racer to travel around Europe during World War II delivering messages that saved the lives of hundreds of Jews.

“He was the only person I knew who used a bike to save lives — until I met Julian Katz,” Kalven said.

Katz was born in New York City. He attended the prestigious Bronx High School of Science and went on to graduate from Syracuse University. He became an engineer, and the dispassionate rationalism that the profession is known for would follow him long after he retired from a decorated career.

“He always approached problems and solutions in an engineering fashion. He would weigh the pros and cons, really thinking things through, not being swayed by emotions,” said his wife Gila.

The two met at an event for single business professionals in Philadelphia. Katz had arrived with another date, but she was smitten with his herringbone suit and his “lovely mustache.” The two made small talk about sailing and Gila’s birthplace of Israel and found themselves talking throughout the night.

Katz and Gila traveled extensively. They often took trips through the Chesapeake Bay on their sailboat. (The Katzes still have a boat docked in King Harbor, named Thira after the Greek island where they spent their honeymoon.) They also ventured further afield, from the ruins at Machu Picchu to boating to Antarctica on a vessel called the Marco Polo.

Their journeys provided one of the few instances that Gila could recall seeing her husband shaken from his trademark calm. On a trip to Europe, they visited the German city of Würzbrg, the ancestral home of Gila’s family. Gila, a rabbi who speaks fluent German, asked the custodian of census records to see the dossier that the Third Reich maintained on her father. After some back-and-forth, the archivists agreed. Her father had owned a factory that manufactured clothing, but the family fled to Israel in 1936 amid rising anti-Semitism. In the ensuing years, the local government concocted a series of detailed, fraudulent accusations justifying the seizure of the family’s property, all of which were recorded in the dossier. As they poured over the documents, Gila could see her husband coming undone.

“There was a swastika stamped on every page. And every time he saw it, it was like someone had hit him in the face. It crushed him,” she said.

Losses of composure were rare for the even-keeled Katz. Gila recalled that at other emotional moments on the same trip, he helped calm her. Part of his concern was being labeled an “ugly American” abroad, something the baguette-loving Katz feared. But his even-keeled attitude had deeper roots.

Ben Shapiro, Gila’s son from a previous marriage, lives in Nebraska and works for the Air Force. Like Katz, he attended Syracuse, became an engineer, and served in the military. (Katz was a veteran of the Korean War.) But when asked about how Katz had influenced him, he said that it was less about a specific life path than his stepfather’s example of “intense integrity.”

“You can be excellent without being egotistical. If you know how to set your ego aside, you can succeed,” Shapiro said, summing up the biggest lesson he learned from Katz. “He’d give me advice like, ‘You have to make sure you don’t overextend yourself,’ and I’d think, ‘Yeah, you’re one to talk.’ When you are around people who are humbly achieving all these things, you can try to live up to it, or you can go in another direction. I chose the former.”

Katz and the family lived in Philadelphia until relocating to Hermosa in 1989 when Katz took a job with TRW. He had not been much of a cyclist on the East Coast, but once he got to the mild climate of the South Bay, he began to see the beneficial role that it could play in personal and public health. 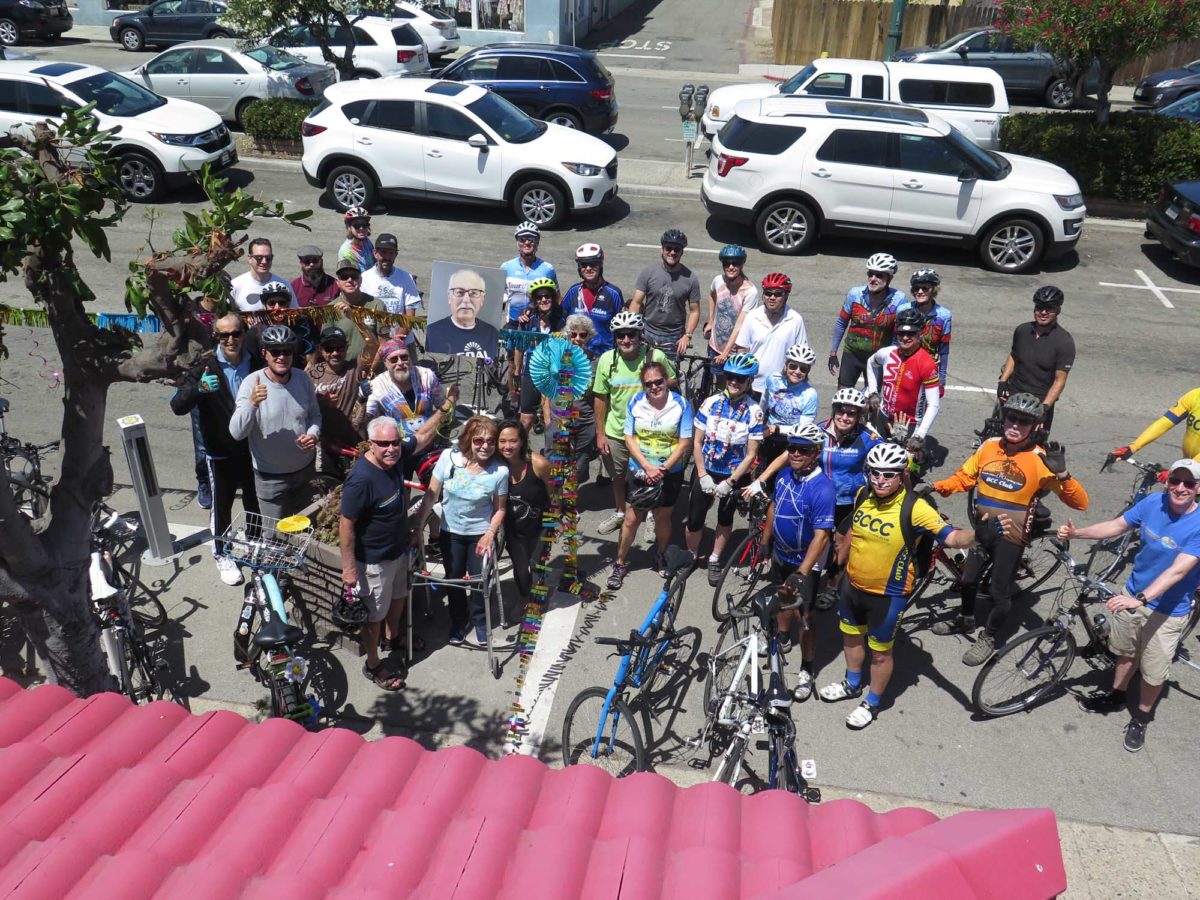 Cyclists gather at a bike corral on Hermosa Avenue Sunday morning during a memorial ride for Katz. The corral is tentatively set to be renamed in Katz’s honor. Photo

Tom Bakaly, former City Manager for Hermosa and now the CEO of the Beach Cities Health District, said Katz was a resource for the district, serving as a model for healthful behavior for his fellow senior citizens and appearing on a poster advertising healthy habits. But Katz was not content to simply pose for a photo. As with local governments, he saw engaging with the health district as a way to make things happen, and he did so with what Bakaly termed “a quiet strength.”

“I like to refer to Julian as my ‘bike conscience.’ Not unlike a real conscience, he always seemed to be there,” he said.

Along with cycling advocacy, Katz was a “Rolling Reader” at 186th Street Elementary School in Gardena for more than 20 years. Every Wednesday morning, he would read to students from books that he carefully selected from the library the week before. He favored authors like James Thurber and Shel Silverstein, who could appeal to the jungle gym set as easily as senior citizens. At his memorial service last week, Marcia Sidney-Reed, principal at 186th Street, recalled the joy Katz seemed to take in his visits, and that he felt so at home there that he kept a coffee mug in the faculty kitchenette.

Moira Nelson, a Hermosa resident whom Katz helped get involved in the Rolling Readers, said she was eager to know the particulars of how the distinguished-voiced Katz went about reading to his students. Katz, seemingly surprised by the question, responded: “I just read the book.” Nelson said she still had a copy of Roald Dahl’s “Revolting Rhymes” that Katz had selected but was too sick to read to the students.
“I know the kids he read to will never forget Julian Katz,” she said.

Hannon, Katz’s friend, and fellow bicycle coalition board member, said that Katz became a model for older people in his continued vitality after he stopped working.

“So many of my aerospace colleagues say, ‘When I retire, I’m going to play golf every single day.’ Then I talk to them two years later, and they haven’t played golf at all. They’re watching TV every day. Julian was the complete opposite,” Hannon said.

Katz was diagnosed with prostate cancer about 12 years ago, but treatment and his own modesty meant many people did not know. Earlier this year, the cancer suddenly became more aggressive. Katz, calm and logical even as the end neared, began the process of saying goodbye. (He made his own funeral arrangements.)

He leaves behind a world that has seen a recent spike in hostility toward the expansion of the cycling infrastructure that he advocated. Hannon said Katz felt that the temporary closure of lanes last summer on Vista Del Mar — which was done to relocate parking spaces and had not been sought by cycling advocates — had “set the bicycling community back a couple years” because of the backlash it produced. But the caricature of lanes hijacked by a radical spandex-clad cabal, Hannon said, bears little resemblance to Katz’s example. Katz saw cycling as a way not only for people to be physically fit, but to meet new friends, and arrive at a destination happy instead of stressed or frazzled. Seeing Katz bicycling home from a trip to the grocery store well into his 80s, Hannon said, gave people hope that the better world Katz worked for was not that far away.

“He kind of created that visual of exactly the kind of society we’d like to live in: friendliness, not aggression, that there’s room for healthfulness, and people who want to participate in this kind of healthy activity. He was an incredible example when it came to seeing him on the road.”