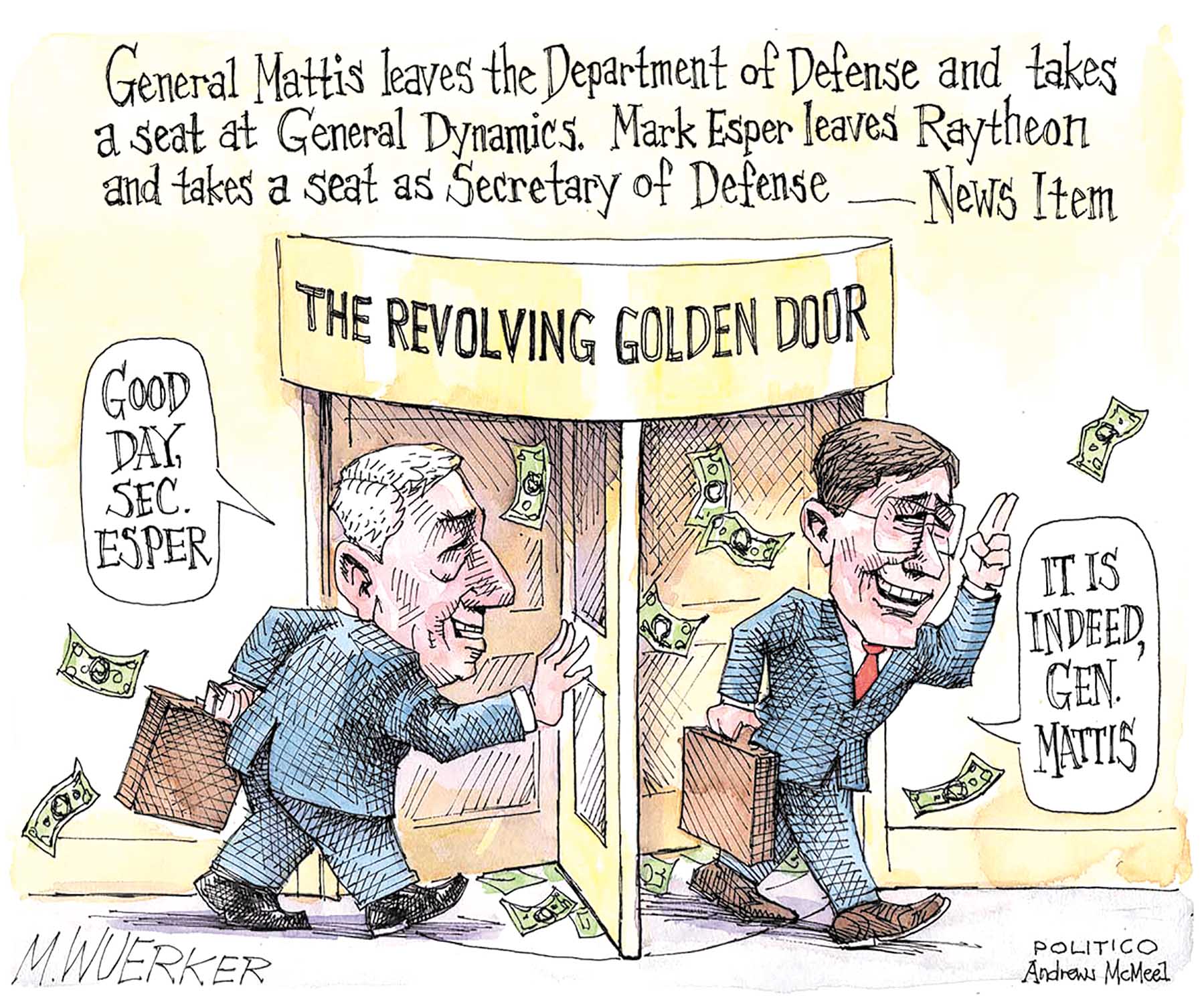 Thanks for the excellent cover story about the 41st Catalina Classic Paddleboard Race [“First, Lansdown duel to finish in 32 Mile Catalina Classic Paddleboard Race,” ER Aug. 29, 2019]. It really is a South Bay thing. For those who might benefit from an analogy, it’s like running a marathon — plus six extra miles — with one’s arms instead of legs. Despite the incredibly grueling 32 miles, see these athletes at the end-of-the-day party, one might think they’d been surfing for a few hours. Congratulations to all participants, especially to first place finisher Max First.

I am writing in response to recent letters criticizing Matt Wuerker’s political cartoons [“Kettle called hypocrite” and “Local angle,” ER Letters Aug. 29, 2019]. I find his work to be intelligent, timely and insightful. They are a very welcome diversion to bring some levity to a serious problem during these difficult times for America. I find it ironic that one of the recent letters complained that “the president was called a racist, a misogynist, a xenophobe, a liar, uncivil and lawless.” There have been 45 American presidents, and a significant majority of the residents in the South Bay, California and the United States were easily able to identify the president that the letter writer was referring to by this excellent description. I look forward to continuing to enjoy Wuerker’s excellent cartoons in the future.

Since a letter writer last week asked, No, I am not tired of Matt Wuerker’s cartoons. I appreciate Wuerker calling out anyone who is a racist, a misogynist, a xenophobe, a liar, uncivil and lawless — whether that person is occupying the White House or the house next door.

Thanks for maintaining the long and important tradition of political commentary in the United States of America.

Cork [Corky Lowry] is a great guy and actually works on my guitars. It is exactly people like him that the undergounding loan assistance program was created for. Nothing needs to be paid until the house is sold and the value is unlocked [“El Porto undergrounding vote underway,” ER Aug. 29, 2019]. Seems to me everybody wins, but I respect everybody’s opinions. I love our section of town and regardless of what street I live on, I think this will be fantastic for the neighborhood.

I’ve also actively organized the fight against the proposed desal plant and organized anti-crime meetings with former Police Chief Eve Irvine. So if people want to spin it like it is self-serving, so be it. I just love El Porto, the people, and best of all the surf!

There is a conflict of interest here. The person pushing for this undergrounding works in real estate. If values go up, he gains [“El Porto undergrounding vote underway,” ER Aug. 29, 2019].

Attack of the 1 percent

This what we get when hedge-fund managers move in [“El Porto undergrounding vote underway,” ER Aug. 29, 2019]. Those of us who were here when Manhattan Beach was populated by flight attendants, barbers, cops, regular people, who bought a house when every house at the beach sold for $40,000, are now in jeopardy. Seems as if we’re mostly retired, living on a fixed income, or are winding down, have paid off the house, and now get to look at some outsized assessment and hook-up fee so the 1 percent can have a second, or third, home without having to look at wires for the two to three weeks they’re in the house. We go to The Kettle, El Som, or Nicks, not Arthur J’s. We’re the early crowd at Erc’s, and don’t look forward to having to continue to bust our humps so some guy in a McMansion can have a clear view.

Voters in Districts 12 and 14 should understand how the proposed Undergrounding Tax works.  It’s unfair and illegal because its assessments aren’t proportional to individual property owners’ benefits [“El Porto undergrounding vote underway,” ER Aug. 29, 2019]. Undergrounding’s prime benefit (Prop 218 calls it a “special benefit” because it’s unique to each property) is aesthetic – cleaning up the view. It’s all proponents ever talk about. Each lot’s view improvement is unique, so you’d think the assessment would reflect that. It doesn’t. Instead, each lot’s “aesthetic benefit” assessment depends on square footage. It doesn’t matter whether the lot is on Highland Avenue (already undergrounded), Ocean Avenue (lots of wires), The Strand (no wires), numbered streets (some wires) or the Places (the worst wires because they were designed to be where utilities should go).

The California Supreme Court holds any Prop 218 assessment exceeding the special benefit to any parcel is illegal. The Court of Appeals struck down such an illegal undergrounding assessment in City of Tiburon v. Bonander — 180 Cal. App. 4th 1057 (2009).

The City’s representative suggested otherwise in a recent meeting, saying the City had withstood an undergrounding lawsuit some years back. In fact that lawsuit was dropped without appellate review, before Bonander ruled Tiburon’s undergrounding district illegal because “no assessment shall exceed the reasonable cost of the proportional special benefit conferred on a parcel.” This is an unjust, illegal scheme because it makes one neighbor pay for another’s special benefit. Let’s vote it down.

Letters were apparently sent to all El Porto residents by a Strand resident strongly opposing undergrounding in her district [“El Porto undergrounding vote underway,” ER Aug. 29, 2019]. The Strand, and has an unobstructed view because all the utility wires attach to the back of Strand residences. Unfortunately, the neighbors behind the Strand residences  have to look at the multiple wires feeding the Strand homes. The Strand resident’s letter states “The undergrounding plan forces those with little or no view improvement to pay for their neighbor’s windfall.” I suggest that individuals living in homes that are fed by wires obstructing their neighbors view be more sympathetic to the cause. The Strand resident further states “Do unto your neighbors as you would have them do unto you.” As such, the utility companies do not have easements to cross property lines, and many homes have lines illegally crossing their property to provide service to adjacent neighbors. Interesting to see how their attitude would change if property owners with wires crossing their property, in place for fewer than five years, demand they be removed, and refuse to have new wires strung to service the homes with unobstructed views. If owners are going to take the “it does not bother me” attitude, then other affected owners should take the “it does bother me” attitude, and refuse to have the lines cross their property.

So there I was at Manhattan Beach City Hall. I was there to renew my dogs’ licenses. I was told one of my dogs could not have her license renewed because she needed a rabies vaccination. I pointed out that her “current” vaccination did not expire until February 2020 and showed the paperwork that stated that fact. The two people behind the counter told me to come back in February. I said, “Will I be assessed a late fee?” The reply was “Yes.” This story gets worse, but I know there is a word limit regarding these letters. Maybe that is why we have certain rules on the books that are just there for the inconvenience of the Manhattan Beach residents, and for another money grabbing opportunity for the city with a “small town ambiance.”

My personal favorite moments of the Teen Choice Awards were, first, going to the parking lot on the south side of the plaza that was half full, and being told by an obvious production assistant that there wasn’t any more parking available — on Wednesday before the event [“Teenmageddon avoided at Hermosa Beach Teen Choice Awards,” ER Aug. 15, 2019]. There were signs posted everywhere that the parking was available to the public. Clearly he was saving parking for “important people.” The second was being able to get a table upstairs at Hennessey’s for lunch with no wait on the second Saturday in August — unheard of.

In all my 68 years here in Hermosa Beach, I have never been to, or seen, an event

I’m sure that many teens and, a few of their parents, were very happy with the event. That part was wonderful, the teens do deserve a nice, free concert on the beach, just as we adults have had for years. But, it came at the expense of many downtown businesses and local residents who were not properly noticed in a customary and timely manner. A huge event like that one was months and months in the planning stages, and the City’s so called public meeting was held way too late and too close to the event itself.

Also, and most importantly, the whole debacle was not authorized or permitted by the California Coastal Commission (CCC), which oversees all beaches in our State, public or private.

We walked down to Pier Plaza for ice cream about 9 p.m. and some out-of-town employee of the producer told me I could not pass on the public’s right of way, known as Pier Plaza. I told him quite frankly I can pass here anytime I want since my folks and I have paid for it, and maintain it with our taxes, for almost seven decades. I have never seen fences and barricades on the Plaza, let alone all of the street closures, plus fences on the beach, which is illegal, even if the City says “we own our beach.”

I wish more people in Manhattan Beach cared about the schools underperforming in the local area that actually need money. Such a shame to give $6.5 million to a school district where nearly  everyone already goes off to college [“MBEF gives $6.5 million to MBUSD,” ER Aug. 29, 2019].