Longboard Surfer Siordia Back in the Groove 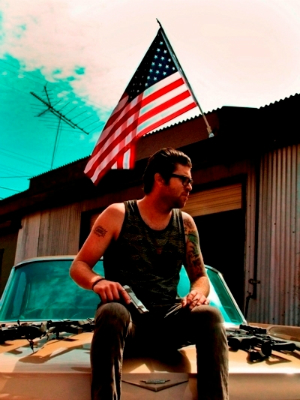 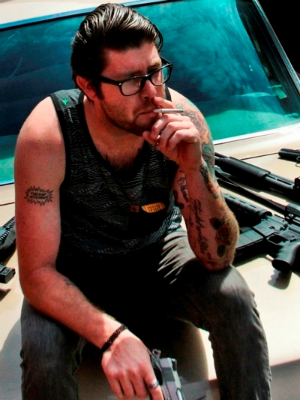 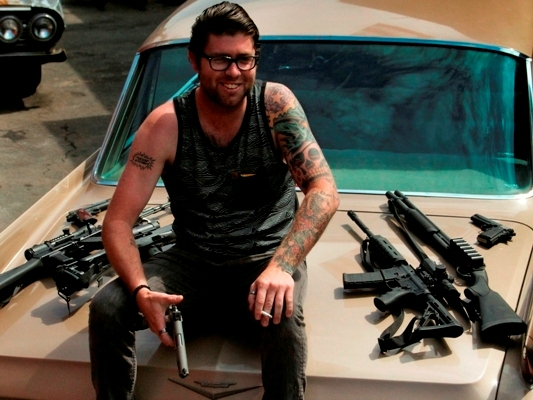 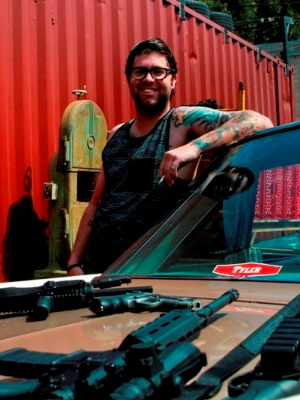 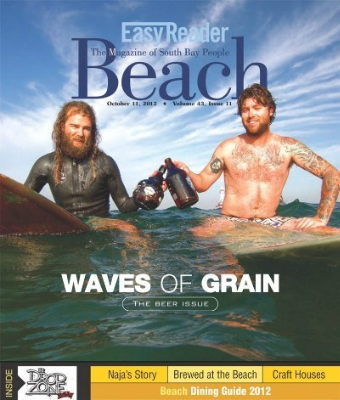 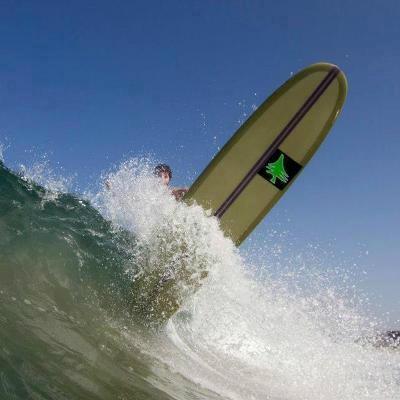 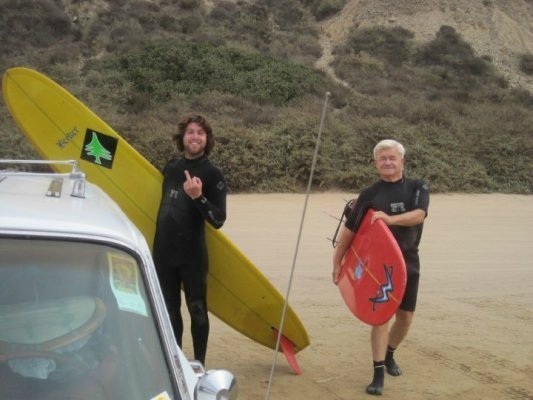 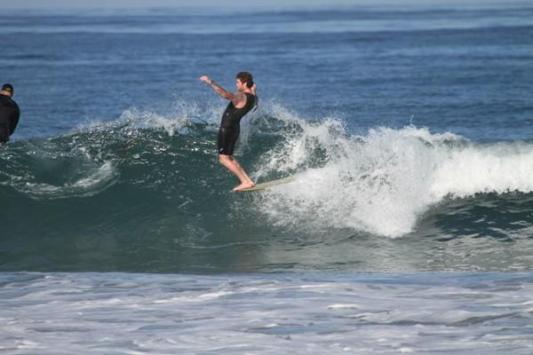 Mike Siordia defines the postmodern South Bay surfer. He incorporates influences from generations past yet maintains a level of originality. Posted up on Hermosa Avenue in the original “Surf City,” Hermosa Beach, Siordia finds time to catch a few waves and stand out at all the local breaks

I met up with Siordia for a morning surf near the Redondo Beach Pier, just south of where George Freeth caught some of the first waves in California in 1907. The surf was three- to five-feet with a lowering tide, causing it to be a bit crunchy on this inside. 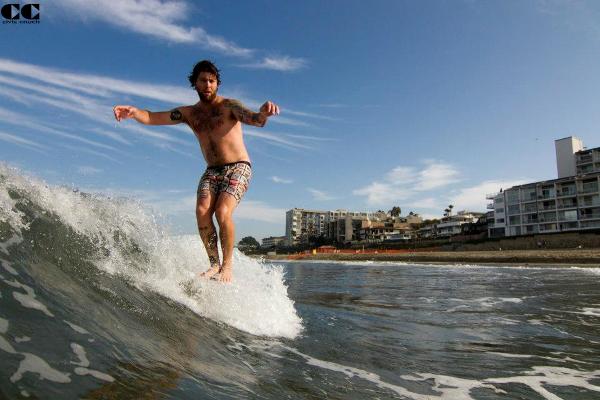 Siordia feeling comfortable on his favorite part of the board Photo by Brad Jacobson (www.civiccouch.com)

“Now I know why all the old boys complain about spraining ankles,” Siordia said. “Man, I’m getting older now and riding into six inches of water sort of sucks.” On the lefts, former pro Mike Purpus, who’s out almost every day, was screaming down the line, switching stances, and pulling roller coasters that a 63-year-old with two fake hips should not do.

After our surf, we cruised down to Scotty’s on the Strand to get firing on the questions. This was a nice change of pace. Normally, he’d be throwing down eggs and beef hash with a few famous Tommy Slater bloody Mary at the Mermaid at Pier Avenue and the Strand

“Yeah, after my birthday and then St. Patty’s the next day,” Siordia explained. “I’m taking a little bit of a leave of absence.”

Before I could question the young Siordia, out of the corner of my eye I saw legendary South Bay shaper Pat “Gumby” Ryan. Ryan was Siordia’s first board sponsor and ET Surf/Just Longboards gave him his first job as a shop rat.

“Ahhhh, you’re going to have to get back to me on that lad,” Ryan said jokingly. “I don’t trust him with that new, slick back hairdo.” (Siordia had long hair through for most of his twenties).

“This was in the heyday of ‘Rad,’” he said. “I just wanted to be Cru Jones.” Siordia moved to Hermosa Beach in the early ‘90s. His father “Big Mike,” managed the Wayne Miyata surfboard factory on 6th and Valley, in the old Greg Noll surfboard factory.

“Hermosa Beach was so different then, before the influx of the east coast yupster,” Siordia said, “You could drive on Pier Avenue, Shoreline Glassing was still pumping out beautiful boards, John Joseph surfed and Purpus didn’t,” Siordia recalled.

His surfing started getting noticed in middle school, when he was affectionately nicknamed “short stack” by local surfers and punk rockers. By the time Siordia was in High School at Mira Costa, the breeding ground of Dewey Weber, Mike Purpus, Sparky Hudson, and Dru Harrison, among others, he was a star on the surf team and clothed completely in red, as a member of the Dewey Weber surf Team.

“Yeah, I didn’t really part ways to well with Team Weber,” Siordia said, “When I first was on the team, I was squeaky clean, with short hair, and hadn’t really ever hit the nightlife. In the closing chapters of my team tenure, I really took it up a notch.”

At the last Weber Classic, Siordia made the finals as he did every year, despite a staph infection on the inside of his knee this size of a tennis ball. Between the closing horn and the award ceremony, Siordia hit “Turks” pretty hard and showed up a little “under the weather.”

“Every year I’d surf that thing, even when people on the beach said I won, I’d end up 2nd or 3rd to a Doheny local.” While on stage, receiving another 3rd place trophy and wearing a “Creme” T-shirt, Robin Kegel’s defunct brand, Siordia took the Hatchet Fin Trophy, and made a third appendage before tossing it into the sand.

(Earlier in the day Robin had set up a Creme demo down the beach with hired help from the local workers outside the Donut Shop in Capo Beach. Rangers were called as he and his amigos were chased down the beach.)

For the last year or so, he’s been a test pilot for Tyler Surfboards.

“In the whole mix of things, we all know Tyler’s boards are superior and it’s something I’ve always dreamed of being a part of,” Siordia said.

The model Siordia is most associated with is the Double Stepdeck.

“He has a very aggressive style of traditional surfing that hints at his contest upbringing,” Adam Davenport of Davenport Surfboards said, “He is very versatile, but what sets him apart is his ability to pump on the nose and utilizing the flex of the step of his double stepdeck to make sections.”

After burning out on the contest scene and trying to shed his competition past, Siordia put back on the Lycra singlet for the first time since high school and won the longboard division at the May 12 Spyder Surf/South bay Boardriders Club contest at the Manhattan Beach pier.

“Through my first heat I just had to dust out the cobwebs and find the contest mindset,” said Siordia. His judge pleasing nose tricks came out of the bag like it was 2005 all over again,

He identifies “Uncle” Wayne Miyata as his favorite all time surfer. The young Siordia was with Miyata all the way to the end. “When Uncle Wayne was laying there in bed during his last days, he said to me, ‘Grab the cup, Mikey-boy,” Siordia said, “I went and grabbed the cup for Uncle Wayne. He sipped it and I asked him what it was. He said, ‘Liquid morphine.’”

Firearms are Siordia’s second hobby. He owns an arsenal that includes AR15, AK47, three Colt 45s model 1911, a 45 Corbin, and a 12 gauge Mosbey shotgun. “Shooting just gets my rocks off with all the power in my hands,” he said, “I just purchased a gun rack for my Jeep Comanche.”

93.5 K-Day, the LA based, old school, hop-hop station is his go to for cruising around the South Bay especially in his 1962 Cadillac. “I play it all day, every day,” Siordia said, “just cruising the American dream of 1962.” 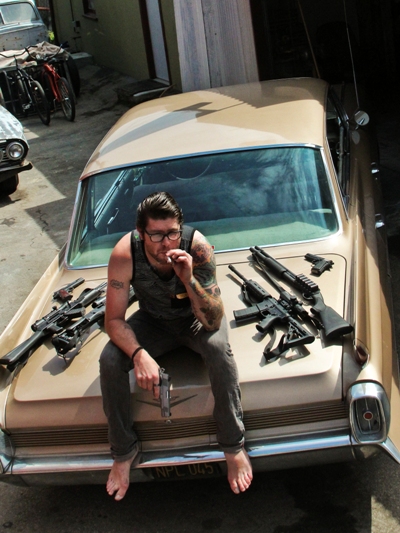 Siordia, Cadillac, and his quiver of guns Photo by: Melissa Neff (isntlifeswell.blogspot.com)

At home, the online radio station Dirty Hippy Radio provides the grooves for his modest one bedroom mid-century apartment.

Besides a bar stool at the Mermaid, or at the Purple Orchid, a tiki bar in El Segundo, you’ll see Siordia catching a few ones at his local spot, Rosie Palms, Star Bar, a mysto break that goes off on certain swells. His ideal spot would be best described as “Rincon-esque.”

No Barrel Dodging here, Siordia setting up for a deep one Photo by: Kiyo Okada (classicwaves-usa.blogspot.com)

Siordia has a love/hate relationship with the area that nurtured him. “Yeah, we are the original surf city, USA,” he said, “But now, everything is overpriced, overpopulated, our surf is pretty much crappy, and we are being robbed of our history, especially when two prominent South Bay-based brands relocate down to San Diego.”

Siordia chuckles. “My goal is to put us back in the spotlight with our rich history and resurrect our heritage.”

Eddie Solt, Jr. can be reached at ESolt@Easyreader.info ]. DZ