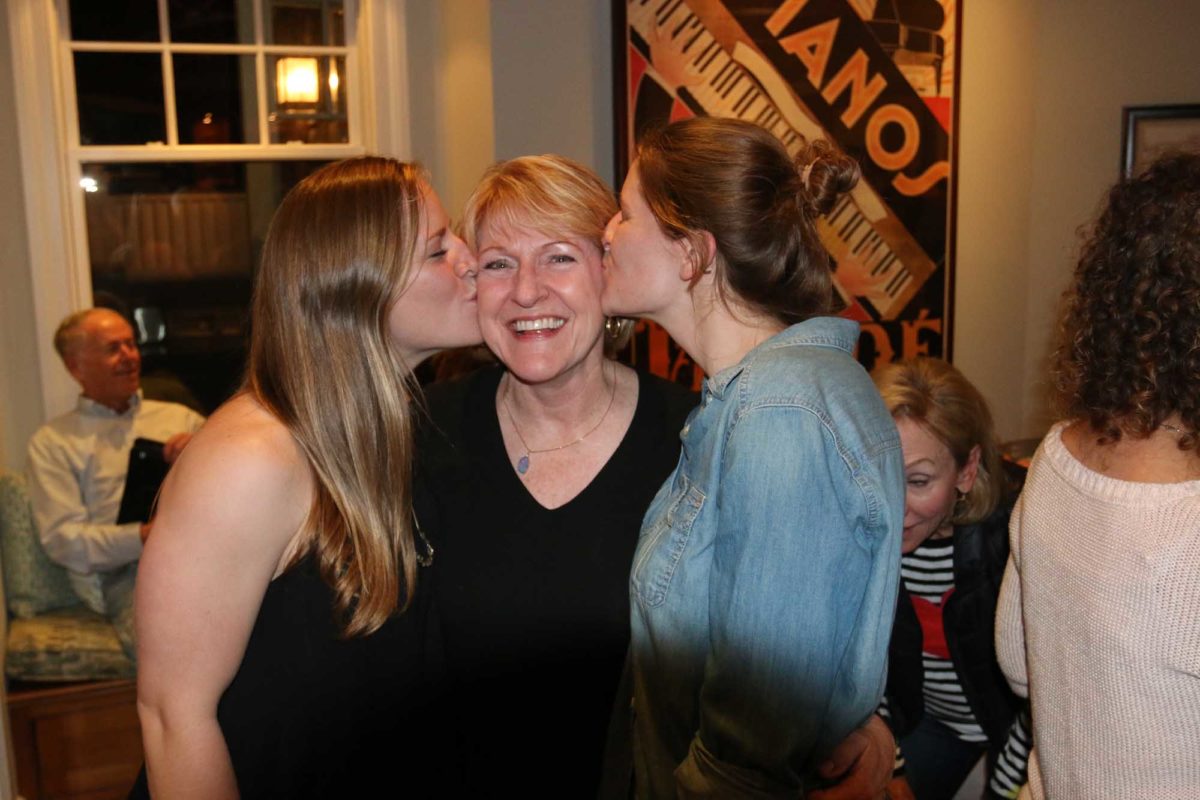 Nancy Hersman with her daughters, Katie Becker and Megan Hersman, on election night in 2017. Photo by Ryan McDonald

Hersman is serving her first term on council. She praised Napolitano, a Manhattan Beach native, as “a tough guy to follow” especially given that her 20 years in town make her relatively new.

Of course, Hersman knows the community pretty well herself.  She’s a former two-term MBUSD school board trustee, planning commissioner, and Parks and Rec commissioner. She also served as executive director of the Mayor’s Youth Council prior to serving on council. She will serve the next nine months as mayor, per council’s rotating mayorship.

“This is not something I pictured myself doing or ever dreamed about, but now that I’m here, I’m just honored,” she said.

“The one thing that’s been bugging me since I got elected is the stormwater fund,” she said. “Everybody is like, ‘What? That is really dull Nancy.’ And I get it. But since 1996, we have been paying $19 in our property tax bill [for the stormwater fund]. Since 1996, this has not changed, and guess what? The expenses have gone up dramatically every year.”

As a result, the city has been forced to subsidize the fund to the tune of $1.5 million a year, Hersman said. The only way to address this is for local voters to approve a tax hike, always a daunting task, so Hersman said she hopes to lead an education campaign on the issue.

“We are very environmental,” she said. “Our city has been leading the way on environmental issues, and storm runoff is a big issue, right? So I’d like to get a real education campaign going and get our community behind this. Yes, it means an increase in our assessments, but we’ve never been a community that shies away from what we know is right.”

Hersman also hopes to plan a 100-year celebration of women’s suffrage by honoring the women who were early leaders of Manhattan Beach.

“One of the reasons we need to do this is we started this community with women,” Hersman said. “The ten women who started the Neptunian Woman’s Club in 1909, they got things done.”

Hersman effusively praised city staff for all their hard work,  and expressed gratitude to the community itself for the opportunity to lead.

“I just want to say thank you,” she said. “I will do everything I can to make sure Manhattan Beach is a city we are all proud to be in.”

team up for kids

Actor, activist and surfer Matthew McConaughey (“Wolf of Wall Street,” “Sex in the City,”) will join the Jimmy Miller Memorial Foundation on Saturday, June 8, in hosting 90 “just keep livin” high school students at the beach in El Porto for a day of learning about the ocean environment.

Saturday will be the third time the two non-profits have teamed up in El Porto.

Activities are from 9 a.m. to 1:30 p.m. on the beach, on Rosecrans Avenue in Manhattan Beach.