There will always be a place in the world for restaurants that do a few things very well. In and Out Burgers has proven this on a grand scale with a menu that could be written on a thumbnail by anyone with neat handwriting, and innumerable pizza joints have proved it on a local level. A place that makes very good pizza and provides a smattering of sides – at least one decent salad, perhaps some hot wings or something involving fried cheese – you have a business with a time-tested model.

Many pizza joints have strayed beyond their core competence in an attempt to appeal to a wider audience, but Beach Pizza is sticking with the formula that has kept them in business for more than twenty-five years. They have received many accolades for their pizza, including a designation as one of the “top 100 pizzerias in theUS” from Pizza Today. (To which most people respond, “There’s a magazine called Pizza Today?”) What is more important to them is that the stream of take-out orders and deliveries is steady – when I last dined there the phone rang again almost as soon as someone hung it up.

Oddly, the small dining room hasn’t been full on any of three recent visits, two during the lunch hour and one at dinner. Perhaps it’s the limited parking, a very small lot shared with the neighboring market, or perhaps people just like to enjoy their pizza at home. I prefer it fresh and crisp from the oven, so I am in the minority here. The cozy dining area is comfortable, the old brick walls giving a feeling of permanence, and I’m surprised it is so little used. 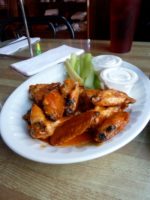 We started with their “simple salad” and an order of hot wings, one item to heat the palate and one to cool it. The hot wings here are actually on the mild side, and are baked instead of fried. The cooking method is healthier but takes a bit longer and makes them slightly less crisp. If you prefer to actually taste the chicken instead of just the sauce and breading, these could be your favorite. The salad was exactly the foil for the wings, cool and fresh with the lettuce, tomato, and mushroom given an extra bit of tanginess with chopped olives. I found the homemade Italian dressing a bit on the vinegary side, but my wife thought it was great. 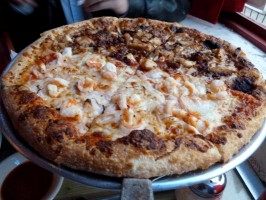 Then it was time for the main attraction – the pizza. My wife had the vege-terranean, which consists of all the vegetables in the kitchen on a pizza crust with mozzarella. I was having trouble choosing between the shrimp scampi and the BBQ chicken supreme, so I asked if I could have half and half. They complied cheerfully and as far as I could tell didn’t charge extra, which earned my admiration. Both pizzas arrived on a handmade crust that was pure perfection, a fully risen bread dough that was light and chewy. True pizza dough should be as light and tasty as a good loaf of Italian bread, hearkening back to the origin of pizza as a baker’s snack inNaples. Our expectations were exceeded, and I can say without hesitation that it was the best pizza I’ve had all year. As for the toppings, I slightly favored the barbecue chicken over the others, because unlike most chicken pizzas the sauce was nicely balanced and not too sweet. The scampi side of my pizza was also very good, and the people in the kitchen had somehow managed to get that crisp crust without scorching or drying out the shrimp. As for the vege-terranean, the vegetables were all either sliced so they cooked in the oven, or had been baked before being added to the pizza. This is important with the eggplant; some places add it raw so that it may be barely cooked through by the time the pie is ready. In this case it was in flavor and textural harmony with the broccoli, onions, mushrooms, olives, and gentle shot of garlic. (We had ordered it without the bell peppers that are usually included.)

Beach Pizza has a modest selection of wine and beer at low prices, so I had a glass of decent merlot while my wife had a soft drink. Dessert was offered – cookies, cheesecake, chocolate cake or a cinnamon twist – but if I had been able to find any space in my stomach I would have had more pizza instead of taking some home. 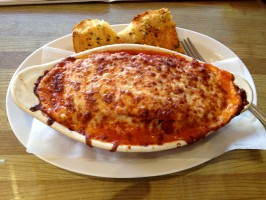 I returned a few days later to see if the pastas were the equal of the pizza, and at the suggestion of my server tried the lasagna. This came with a salad, and I was able to confirm that the blue cheese dressing is better than the Italian, at least to my taste. It was mild and rich but with enough cheese sharpness to let you know you hadn’t been served ranch dressing by mistake.

My first impression of the lasagna was not positive – the sauce at the edge seemed watery, and I wondered if this was going to be another place that should have stuck with the pizza. Once I got to the noodles and filling, my impression changed – the texture was perfect, and the pile of noodles, meat, and ricotta held together rather than collapsing. The sauce had enough herbs, garlic, and tomato flavor to make every bite a treat, and I surprised myself by finishing the uncommonly large portion.

Beach Pizza has become popular by ignoring trends and just putting out great pizza at modest prices, and there’s a reason the place is on speed dial for many locals. Whether you dine in, take it home, or just walk the two blocks to the beach and risk dealing with the sand in your lunch, their pizza pleases.