Utilizing the talents of his three teammates and past knowledge of the course, Ken Hanson capitalized on a late sprint to win the 51st annual Chevron Manhattan Beach Grand Prix Sunday in front of thousands of cheering spectators.

Riding for Optum Presented by Kelly Benefit Strategies, Hanson held off Ricky Escuela, of Argentina, and Hilton Clarke, of Santa Monica, to collect a $3,140 check for the winner of the Men’s Pro National Criterium Calendar (NCC) race.

The 30-year-old racer from Santa Barbara last competed in the Manhattan Beach Grand Prix in 2009 when his strategy backfired and he was forced to settle with a third-place finish.

Hanson drew on his experience and positioned himself perfectly heading into the final turn before accelerating in a final 250-meter dash on the 1.3-mile course that starts and finishes in front of Live Oak Park and is shaped like a slightly bent paper clip.

Cory Williams, 18, of Los Angeles captured his third straight Cat 2 race at the Manhattan Beach Grand Prix and Richard Meeker won his second straight title in the Masters 45+ after finishing second in 2010. 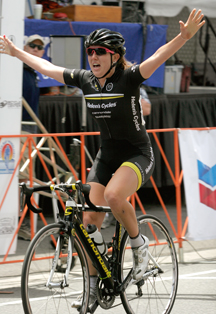 This year marked Chevron’s 22nd consecutive year as title sponsor of the event which continues to draw some of the top cyclists in the world as it enters its second half-century.

Ted Ernst founded the event in 1962 after moving to California and opening Ted’s Manhattan Cycles. When the city of Manhattan Beach gave him the nod to hold a community race, the legendary event was born and has endured to become one of America’s oldest bike races.

Ernst, who turned 80 in April, has as much enthusiasm for the Manhattan Beach Grand Prix now as he did in its infancy. Ernst, the South Bay Wheelmen and the Lion’s Club continue to be the backbone of the event.

“One never projects that far in advance because you’re living it every day,” Ernst said while reflecting on the early days of the race. “You don’t think of it as a legacy because you do it because you want to do it and then you turn around and say, ‘Wow, it’s been a half a century. I must be getting old.’”

Ernst credits his youthful exuberance to being active with young people, always keeping on the move and having a positive outlook on life.

“The community support has been tremendous and I look forward as the race goes into the next 50 years,” Ernst said. “Seeing two generations of people enjoying the sport of cycling and new ones coming in has been a great feeling. It’s so rewarding to see the smiles on people’s faces and provide competition for racers.

“We’ve seen a number of racers like Tyler Farrar, Chris Horner and Greg Henderson who competed here and went on to do very well on the Tour de France, so what does that tell you about the prestige of the Manhattan Beach Grand Prix? This has become a landmark in our community.”

Jamie Paolinetti won the Manhattan Beach Grand Prix in 1997 and returned to the course this year but winning a title for MRI-Monster Media Racing wasn’t foremost on his mind.

Several years ago Paolinetti produced a feature-length documentary titled “The Hard Road,” which took an in-depth look into the world of professional bike racing and used footage from the Manhattan Beach Grand Prix.

Paolinetti is in the process of producing another cycling-related movie and again chose the Manhattan Beach Grand Prix for footage, having a car on the course filming both the 35+ and NCC race.