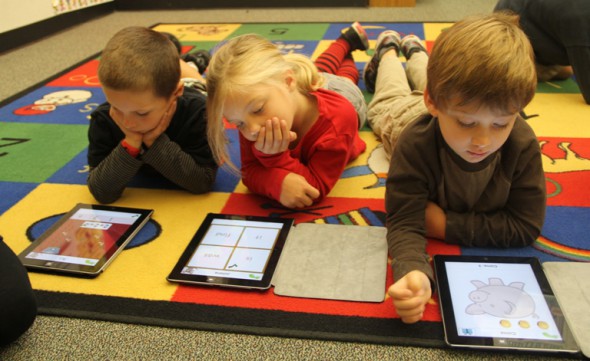 Last month, groups of parent volunteers in blue t-shirts flocked to Manhattan Beach schools, waving MBEF flags and handing out pledge forms to parents picking up their kids from school – the Manhattan Beach Education Foundation was going to work.

Founded in 1983 following the passage of Proposition 13, which changed local school districts’ ability to control their funding, the education foundation has grown into a non-profit organization that funds 66 educators, including classroom teachers, career counselors and librarians.

The foundation raises $4.6 million annually to sustain these positions. So far this year, it’s raised $3.5 million, according to Susan Warshaw, the foundation’s executive director.

In a time of deep economic challenges, when the state continues to slash its budget, the foundation offers Manhattan Beach schools a competitive edge. “Our kids would not have nearly the depth of opportunities, we would be lucky to offer the basics of education,” said Carolyn Seaton, Manhattan Beach Unified School District’s executive director of educational services. Without the foundation, which shares an office building with the district, she continued, “I don’t think we would be able to offer anything unique or that would set us apart.”

Other top ranking school districts, including those of San Marino and La Canada, generate 16 percent and 3 percent, respectively, of their district’s budgets from a parcel tax. When the parcel tax measure in Manhattan Beach failed about eight years ago, the district, foundation and parents decided to shift the foundation’s fundraising model – now, other California school districts are looking to follow suit.

Prior to this, the PTA would raise funds for each individual school, creating disparities in the programs offered at the five elementary schools based on the fundraising capabilities of each PTA. 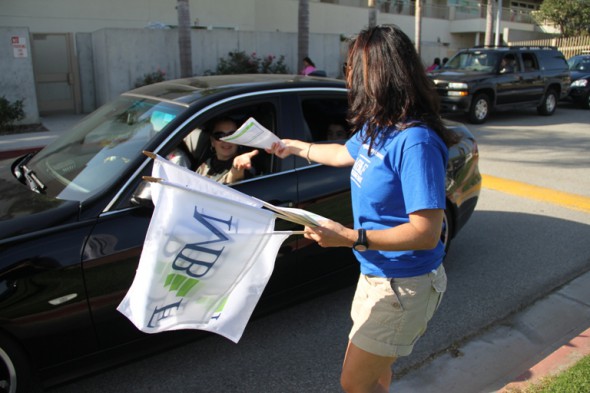 A Manhattan Beach Education Foundation volunteer hands out a pledge form to a parent on the foundation’s annual pledge day. Photo by Alene Tchekmedyian

The foundation has since become the primary fundraiser for the district. It requires that each position it funds be academic, compelling to donors, touches as many students as possible and be distributed with parity among grade levels. “The School Board and the administration establish all of the educational priorities,” Warshaw said.

Parents still have a voice through the school system, said Margo Thole, the foundation’s director of business development. “We tend to hear about what parents feel is lacking, or what is working especially well, because our parents are really engaged,” she said.

The foundation funds nearly 10 percent of the district’s $50 million budget. “Twenty years ago, a bake sale for the PTA just about covered any extra needs for the school – we’re past those times,” Warshaw said. “I don’t think anybody could have conceived of a time when parents would be asked to support the school districts to this extent, simply to keep what was already in place.”

Michael Matthews, the district’s superintendent of schools, said the foundation has helped the district maintain small class sizes while providing academic and counseling support to the students. “Without the foundation, we would have experienced more painful layoffs of our incredible employees, we would lose key programs, and we would probably have a shortened school year,” he said by email.