The McHandsomes perform at Club 705

What it takes to be a McHandsome 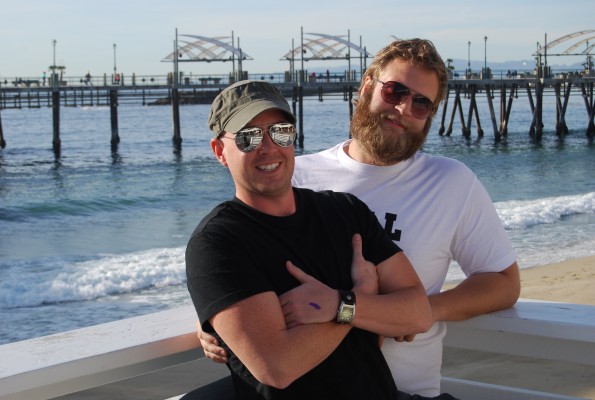 Rory and Kirkpatrick McHandsome, who perform at Club 705 in Hermosa Beach tonight at 9 p.m

Their business card reads: The McHandsomes. “They’re the Best.” Comedians/Musicians/Great Lovers. On the backside: “The Hardest Working Livers in Show Biz.”

What had I stumbled onto with this one? Rory and Kirkpatrick McHandsome, as their self-consigned stage names go: two of the most intriguing knuckleheads I’ve met for some time, with talent. They’re a Redondo Beach-based acoustic rock comedy duo.

“It’s acoustic rock with funny lyrics,” says Rory. “We love to laugh and love music, so we had to combine the two. Also love to drink.”

Based on the card, I just had to know in detail what it takes to be a McHandsome…

“It takes good looks and a lot of moxy; luckily we have both,” says Rory. Kirkpatrick states, “To be a McHandsome, one must have a strong liver and a willingness to embarrass themselves in front of a crowd. That, or be sexed into our group.”

While it may not be a hotspot for it, live comedy certainly lives in the South Bay. Beyond the obvious Comedy and Magic Club, there’s also monthly open mic Thursdays at The Comic Bug in Manhattan Beach, local resident Robert Weissman hosts a free Tuesday night comedy show at the Hermosa Beach Pedone’s Pizza (which headlined TJ Miller just this week)… but rarely does one hear much about musical comedy acts.

“I know of one other comedy musician,” says Rory. “Danno Carter, and he is going to be opening for us at Club 705 on Thursday the 22nd.”

Nevin Mathew (aka Rory McHandsome) and David Risner (aka Kirkpatrick McHandsome) brought their humor to the LA area out of Rensselaer, Indiana 6 years ago.

“We basically came up with it to serve as our alter egos,” says Rory. “I’m Irish and very good looking, and used to email an old girlfriend with a different funny name each time – like Nevin Studlyson, and such. And one of them I used was Nevin McHandsome.”

“People mention we’re like Tenacious D or Flight Of The Concords,” says Kirkpatrick. “And we are in the sense that we play songs intended to make people laugh, but we certainly aren’t as talented as Tenacious D or as New Zealandy as Flight of the Concords. We are like Hall and Oates mixed with the Indigo Girls mixed with Wham!.”

Rory concedes that Tenacious D and Flight of The Concords are huge influences. “Also, we are both big Bob Dylan fans; he’s just not as funny as those two groups, usually.”

The McHandsomes write all original music, and have recorded most of their material, which they sell on CD at shows. But, as you might have considered, shows aren’t so easy.

Most venues are programmed for one or the other, music or comedy. Stand up shows typically prefer 5-10 minute spots, while music venues look for numerous hours. The McHandsomes are in between.

“It’s been decently difficult to find proper avenues so far,” admits Kirkpatrick. “We aren’t a typical music act, where we have guitar or drum-driven songs that are just a loud background for a bar. Our songs really need an audience’s attention to have an impact… Booking stuff is difficult, and getting paid is even more difficult.”

Rory adds, “It’s a little difficult to book being in this style of music. Comedy clubs don’t give us a whole lot of time, and we have over an hour of comedy songs. But even sometimes playing bars and clubs… they sometimes are a little worried of the content…”

Kirkpatrick continues. “A lotta places in the South Bay are bars, and they want an act to play like 3 hours; and even then, people usually didn’t come out to hear you play original comedy songs while they want to drink and party and whatnot.”

Still, The McHandsomes have trudged along for 3 years, performing myriad locations throughout the South Bay and the greater Los Angeles area. They’ve received FM radio airplay in New York, podcast and internet radio in LA, and even made television appearances on season 7 of Last Comic Standing and the reality show The Heart of Western Music (on In Country TV). They’re regularly featured on Monday nights at The Lighthouse in Hermosa Beach, and are playing at Club 705 in Hermosa Beach tonight, Mar. 22 at 9 P.M. They’ll also be taking off to perform at the Fillmore in San Francisco on May 11.

Ultimately, Rory says they’re looking to secure an agent or manager to really help get the act going. “We love to perform and write songs, and hope to get a chance to make it a successful career.”