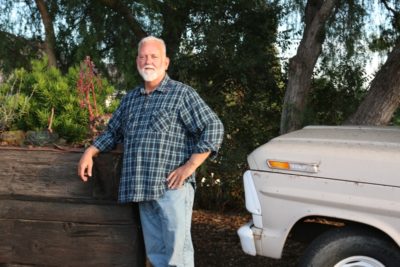 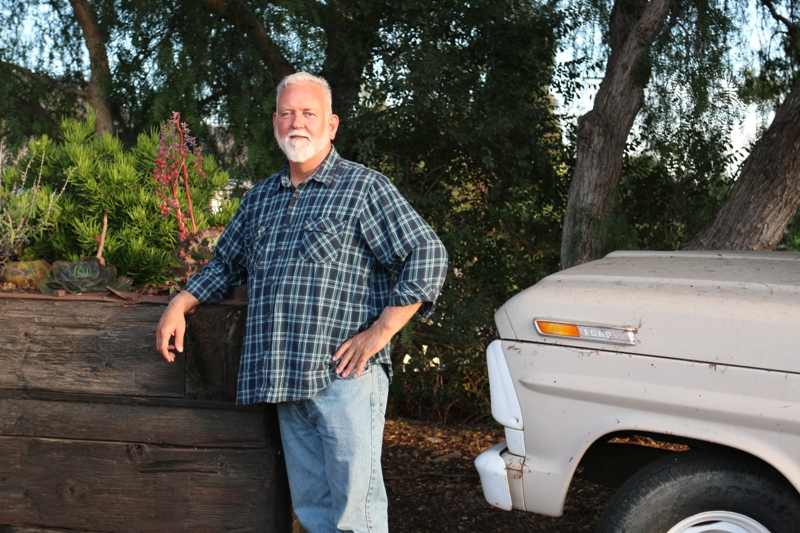 Stick around for the last frames of the ending credits of “ET: The Extra Terrestrial,” past the section for the stunt men and lighting guys and the caterers, and you’ll see a kind of category-less acknowledgement: “Special thanks to American Hi-Lift.”

At the time “ET” was in production, in the early 1980s, American Hi-Lift was a company based in Southern California, and their business was scissor lifts: those four-wheeled vehicles that can lift and lower a platform dozens of feet in the air by extending and compacting a series of masts that interlock, like scissors. And on the “ET” set, the lifts gave the crew trouble.

Thankfully, they had Dave Zelhart’s number. Zelhart, now a Rancho Palos Verdes resident, was rapidly rising through the ranks at American Hi-Lift. He was at that point not yet 21, but had already become the youngest manager the company ever had. And in a service territory demarcated by the deadly serious bookends of San Onofre Nuclear Power and Vandenberg Air Force Base, Zelhart still had plenty of time for the movie biz. In Zelhart’s telling, the studio gave him the unexpected honor of a film credit because he “bailed ‘em out a bunch of times.”

Zelhart still works on lifting and lowering, but on a much larger scale. He is the president of Terminal Equipment Services, Inc. (TESI), a Long Beach-based company that handles maintenance, repair and transport of some of the world’s largest cranes. His work has helped the ports of Los Angeles and Long Beach prepare for the revolutions that have upended shipping in the last three decades, and helped it maintain its status as the busiest port in the nation.

Zelhart rose to the top of his profession through a natural aptitude for mechanics. He can see a machine, rapidly understand how it works, and intuit how it can be made to work better. His speech is filled with technical words — “oblong,” “gantry,” “duty cycles” — that roll off his tongue with a precision that suggests they were learned under conditions in which getting it wrong meant a crushed limb. And in an industry filled with engineering PhDs, Zelhart is entirely self-taught.

Perhaps because his understanding of machinery was accumulated over a lifetime spent in shops and garages, not labs and lecture halls, he has an ease with people that evades the stereotypical engineer. Graham Robertson, a former science teacher at Palos Verdes High School and an occasional employee of Zelhart’s, said that for all his technical prowess, what is most impressive about Zelhart is his ability to get people to move in harmony.

“I taught for 48 years. I worked under a whole bunch of principals, I met a lot of people. And the way Dave gets people to work together is his art,” Robertson said. 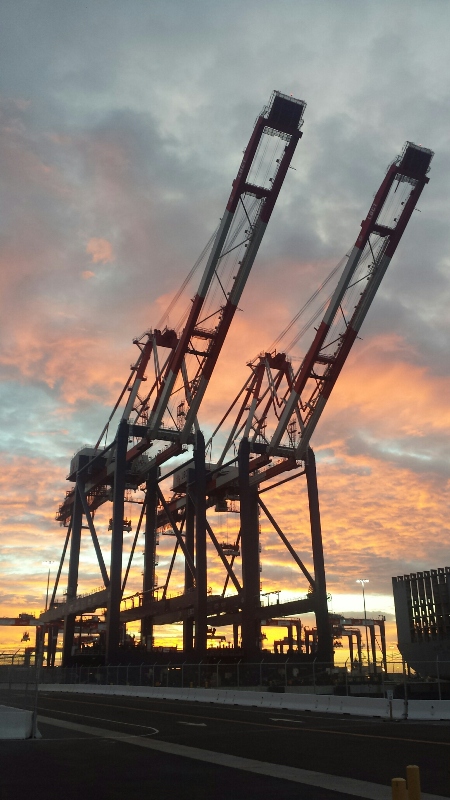 Zelhart grew up in a time and place in which it was considered morally outrageous for kids to ask their parents for money, or a ride. And so he became very good at building and fixing things. And very good at riding his bike.

He grew up in Lomita, and he and his friends loved to surf. So, in the age before pre-packaged surfboard bike-racks, and at a time when the average board was at least a foot longer than today’s potato chips, he built trailers for himself and his friends to tow their boards behind their bikes, and hitches so that each trailer could go from bike to bike. They often rode their bikes from Lomita, down PCH to surf in Manhattan Beach, and sometimes as far north as Malibu.

Zelhart was able to build the trailers and countless other inventions because of the ample tools available in his father’s home garage. Most of his friends, he said, also had fathers with full sets of tools, something he sees less and less frequently today.

“We never threw anything away, we fixed everything ourselves. Today, we’re such a disposable society. Something goes wrong, we just throw it away, and get another one,” Zelhart said.

Zelhart began working full time at a former service station on Miraleste Drive when he was 16. The job at American Hi-Lift followed two years after that. Zelhart became so at ease with repairing scissor lifts that he would deliberately go out on calls without spare parts in his truck, challenging himself to take apart what was there and repair it with only what he had available.

His ability to see all machines as related, as mere variations on basic mechanical principles, allowed him to easily move on to his first job at the port. He worked at a crane maintenance company, and the work sent him all over the world, including two years in Taiwan.

Eventually, the frequent travel put a strain on his family life. He and his family sought a fresh start by opening a new branch of the business he was working for in Norfolk, Virginia. But things did not get better. He separated from his wife, and his eldest son was diagnosed with cancer. For the first time in his life, the man who could fix everything felt helpless. He called his boss, quit his job, and began to pray.

“I just got down on my knees and prayed: ‘I’ve helped so many people. I’ve tried to do right by so many people. I’ve taught people, I’ve trained people, I’ve given people chances, I’ve loaned money, I’ve given money: I’ve done all these things to try and be a good guy. And now I’m at the end of my rope and I need a door opened for me,’” Zelhart said.

Though his drive for self-sufficiency means he is not the type to often ask for help, Zelhart has a knack for timing that brings to mind the surprised Lucille Ball, hand over mouth in shock that her plan has unfolded as quickly as it did. Thirty minutes later, Zelhart received a phone call from an old friend discussing a job in Long Beach. The friend wanted to hire Zelhart, but knew he could not poach him from his existing job, and so was looking for suggestions. Zelhart told him that he had in fact just quit, and was hired on the spot. 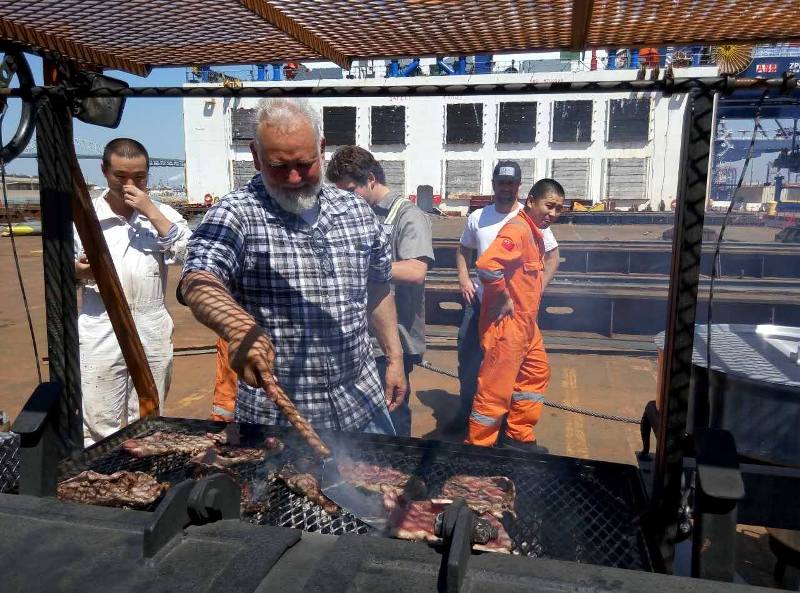 Zelhart mans the grill at a goodbye barbecue for Chinese workers who had been assisting TESI on a recent crane installation. Photo from Facebook

Craning toward the future

In the way people are thought to come to resemble their pets, Zelhart’s home in a secluded area above Portuguese Bend is a reflection of his own quiet modesty. (During the roughly two hours that I spent there, I heard half a dozen rooster crows and zero cars.) A massive wooden planter sitting in front of his house is in fact a converted piece of old mooring equipment that the port was set to dispose of. Zelhart could not countenance this, and took the multi-ton structure off their hands. He estimates that it took him 12 hours to get it off a truck and position it in his front yard, a job he did himself with a series of pulleys wrapped around trees.

Technological innovation is at the heart of TESI’s work today. An increasingly connected world, and people’s demands for increasingly rapid transit of goods, have motivated ports to handle higher and higher volumes of goods, and accept larger and larger vessels.

“When I first started, the biggest ship we were servicing was 3,500 TEUs,” Zelhart said. (Ships are traditionally measured in twenty-foot equivalent units, or TEUs, for the size of a standard container.) “The ones that we just designed this new terminal for have 22,000 TEUs.”

The cranes have grown alongside the ships. When Zelhart began, cranes reach about 85 feet. He recently moved a crane that reaches 175 feet tall. And instead of moving one container at a time, the cranes can now hoist up to four at once.

The increasing volume of goods has put pressure on everyone at the port for greater and greater use of automation and robotics. This is as much an issue of safety as efficiency, Zelhart said. (Last year, TESI received the Safety Award from American Equity Underwriters for its lack of on-the-job injuries in what was once a very dangerous profession.)

“We can’t do a 22,000 TEU vessel with people running around with clipboards, and diesel trucks, and chaos. It just doesn’t work,” Zelhart said.

The drive for automation, however, runs against the interest of one of the few formidable labor organizations left in the country, the International Longshore and Warehouse Union. Joe Donato, a former vice president of ILWU Local 13, has worked with Zelhart for many years. He said that while the interests of employers and unions would always be at odds to some extent, Zelhart clearly cared about safety, and was always willing to sit down and listen.

“He was very good at what he did. But just as important, he was willing to work with the union to resolve things, rather than have conflicts. That’s what we need at the port. We need cargo to  keep moving through that port, and to avoid stoppage, we need employers who don’t want conflicts,” Donato said.

It’s likely that some of Zelhart’s success at the port comes from his lived-in mechanical know-how, which gives him an ability to forge connections with the union representatives fighting for some of the few well-paying, working class jobs remaining in the country. Zelhart is wary about our society’s increasing technological ineptitude, and is an advocate for technical training programs.

“I’ve got some great guys who work for me. But I am highly worried and concerned. Not everybody can go to college. And to be a plumber or electrician is a good trade. You can make a good living for your family, and you will always be in demand,” Zelhart said.

At the port, this has taken the form of frequent training of longshoremen for  newly adopted technologies. Robertson, the former PV High Science teacher, worked for TESI as an instructor, teaching ILWU members, and said Zelhart showed a keen interest in helping them prepare for a changing world.

“Crane mechanics are the kind of guys who did not do well sitting in desks in class. But they’re brilliant, great, practical guys. And under Dave they really did well,” Robertson said.