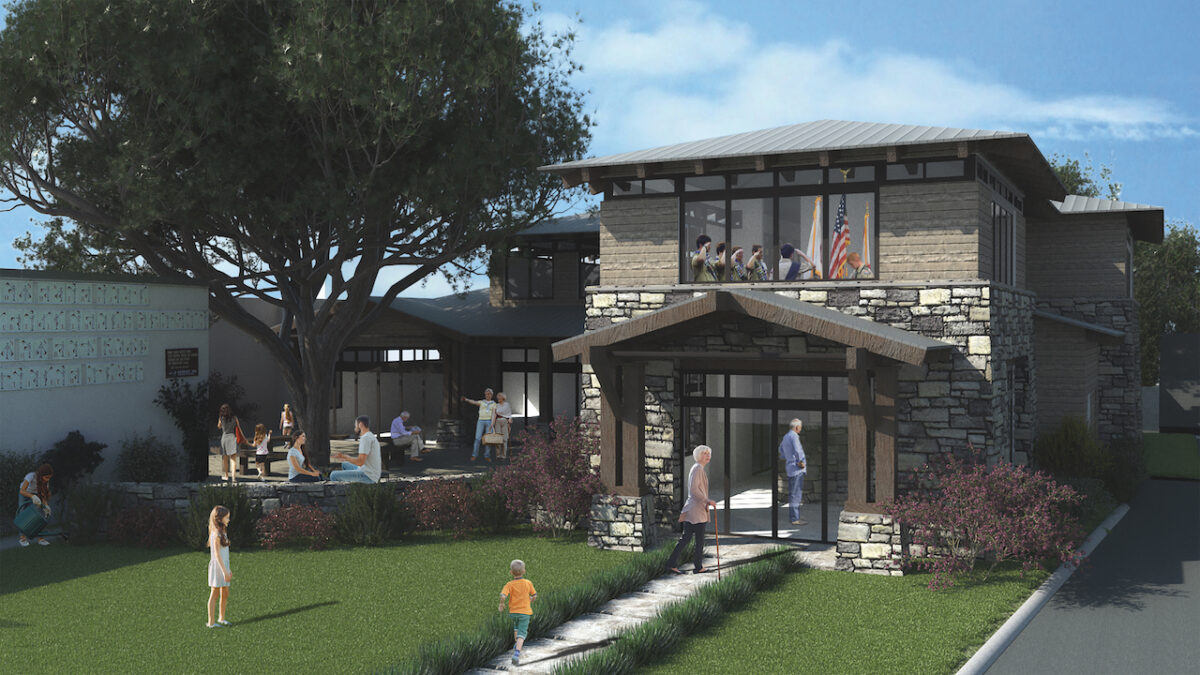 The new Friends of the Senior and Scout Community Center. Rendering by Tomaro Design Group

Social isolation went mainstream during the pandemic, when normally hypersocial young children and teens joined the oldest among us in the house-bound doldrums.

These are some of the reasons the Friends of the Senior and Scout Community Center are hoping to come out of the pandemic with a final push in fundraising to provide a local solution to social isolation, and to do so in a way that specifically brings older and younger generations together —  a brand new Community Center that brings together the functions of the existing Scout House and Senior Community Center near the city center.

“Our feeling is we are going to need space like this even more after the pandemic, because people are really craving that social interaction now. You can just see it,” said Bonnie Schwartz, who serves on the Friends board of directors.  “We need a place where people can congregate, where these things can happen. I think people are up for that.”

The project has been in the works since 2013 to replace the existing building, which is nearly 70 years old and near the end of its useful life. The $3.7 million project was on the cusp of finally being constructed through a private-public partnership between the Friends of the Scout House non-profit and the City, with all but about $700,000 accounted for and a big fundraiser scheduled for March 2020. Then, like everything else, it went into a period of suspended animation.

But now the effort is coming out of the pandemic at full speed. Mayor Suzanne Hadley has joined the fundraising effort and intends to provide a boost. Her goal is to help raise another $1 million to finally get to construction.

“I’m thrilled to help make the MB Community Center a reality,” Hadley said. “This is a once-in-a-generation opportunity for Manhattan Beach to build shared gathering spaces. The 7,000-square-foot Community Center will provide much-needed spaces where our residents can brainstorm and build, collaborate and celebrate. This includes our active seniors —  Manhattan Beach’s fastest-growing demographic — to our busy students and scouts and all ages in between.”

Friends board member Julie Justus McGinity said the organization is delighted to have the mayor taking up the cause, which she emphasized is even more urgent in the wake of the pandemic.

“This is a Community Center that will create much needed space for our seniors to get out of their homes, for our youth to get away from their screens, and for community-based organizations who serve our communities to meet and host activities. Those are the social connections, the fabric, if you will, of what makes Manhattan Beach unique and it cultivates that small town feel that brings people to Manhattan Beach in the first place. And it’s that small town feel that longtime residents want to preserve and grow.”

The increased fundraising goal will hasten the project, McGinity said, allowing the City —  which had formerly committed to building the shell of the building, about $1 million in costs —  to take over all the construction, including interiors and outdoor spaces. McGinity said initial plans, co-signed by the City’s Rec Department and the Friends, will be submitted to Community Development by early June. The design, completed by local architect Louie Tomaro, exceeded expectations, both in terms of aesthetics and functionality.

“We are thrilled with the design,” McGinity said. “Louie has been such a partner, well beyond his architectural genius. He’s really been a thought partner in the whole endeavor. We are very grateful to him.”

The new facility will include elements of the old one, including some of the actual panelling and flagstone, but will be over twice the size of the existing 2,700 sq. ft. building. The facility is designed for maximum flexibility. It will be able to accommodate up to 250 people and includes smaller meeting rooms for more intimate gatherings. Its doors open up to a courtyard with a fire pit, a barbecue area, and an amphitheater. Roughly 1,000 sq. ft. will be dedicated to the City’s award-winning Older Adult Program, which offers more than 30 activities weekly ranging from lunch brunches, club meetings, and a weekly “Doc Talk” to technology classes, a poetry circle, and even yoga and Zumba classes. The new facility will allow those classes to expand from 5 to 25 participants the OAS activities typically attract to between 30 and 50.

“These programs will be there for all of us at some point in our lives,” said Schwartz. “Some of us are already there. But all of us will be.”

An addition to the plan is the participation of the Beach Cities Health District, which contributed $150,000 to the new facility and plans to conduct a series of senior nutrition/demonstration cooking classes, in addition to other programming.

In terms of intergenerational programs, the intention is to build on current technology classes in which the young “digital natives” instruct their elders.

“One of the more successful existing programs brings together young people, usually middle school or high school students, and older people around the use of technology,” McGinity said. “In this case, it is usually the younger people supporting older people in how to use their telephones and laptops.”

But McGinity said the new facility will allow more programs to exist in which younger people can tap into the wisdom of their elders, such as the existing stamp collectors club inviting Girl Scouts to their meetings to learn about stamp collections.

“That is just one example of all these little micro-opportunities, things that we can’t anticipate that will happen in a facility which is large enough to be able to accommodate more than one group at a time,” she said.

McGinity said the goal is to complete fundraising by the end of the year, and that those donating will be recognized permanently through a donor wall, bricks in the courtyard, and naming opportunities. The City hopes to solicit bids for the project by early next year, and hopefully break ground by year’s end.

Hadley said she is embracing the opportunity to spend her last months as mayor focused on bringing this project to fruition, which weds her passions for working with older adults with her enthusiasm for public-private partnerships.

“We learned during the pandemic that social isolation can be as deadly as a virus,” Hadley said. “Our new shared spaces will bring our community together once again, in person. Nobel Laureate Albert Schweitzer once said, ‘All true living takes place face to face.’ After our long year of a pandemic, the MB Community Center will allow us many more opportunities to do just that. Let’s get this done together.”