Now on view: “Are You Thinking What I’m Thinking?” at the Malaga Cove Library 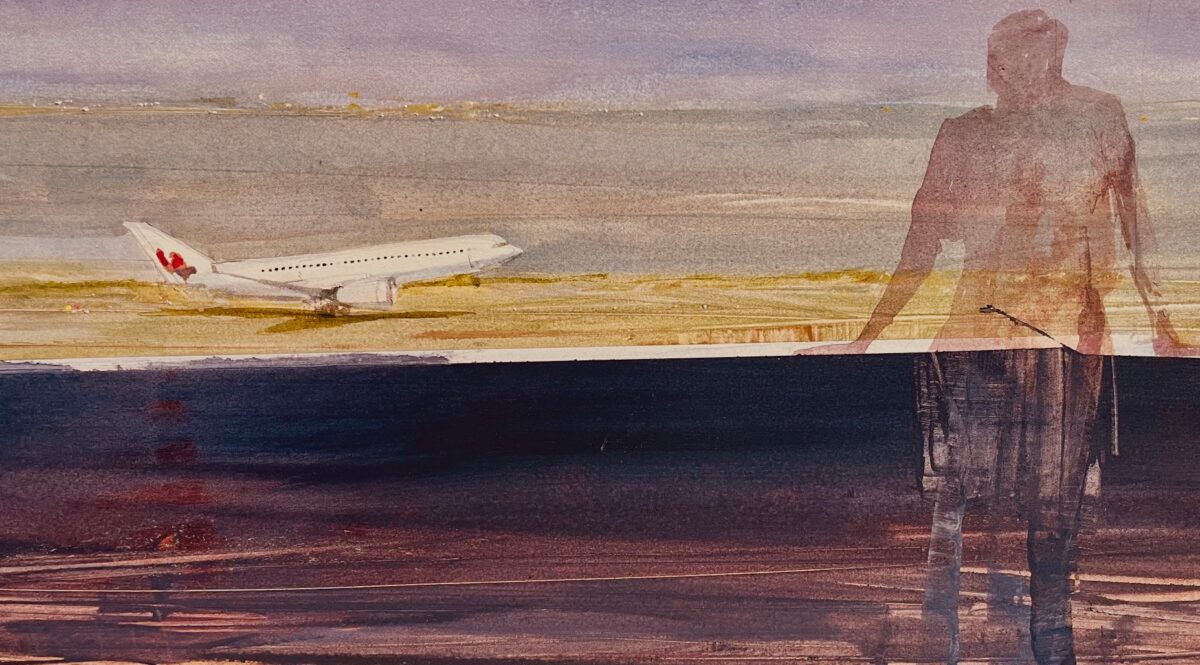 “For a Moment, It Seemed Life Was Pretty Good,” by Ross Moore

“For a Moment, It Seemed Life Was Pretty Good,” by Ross Moore

The pandemic has been an unruly passenger, causing us to make pit stops and take detours, and for those of us involved in the arts it’s led to postponements and cancellations. I have a bit of experience in this myself, being one of the lock-and-key organizers of “Are You Thinking What I’m Thinking?”—a group art show that was to have premiered two years ago at La Venta Inn and then gone on view for half a month in the Malaga Cove Library art gallery.

All of that collapsed only days before the opening reception, but 18 months later the show took place, only this time for six weeks at the Palos Verdes Art Center, in tandem with work by renowned sculptor Eugene Daub. I won’t mince words: It was a grand success. 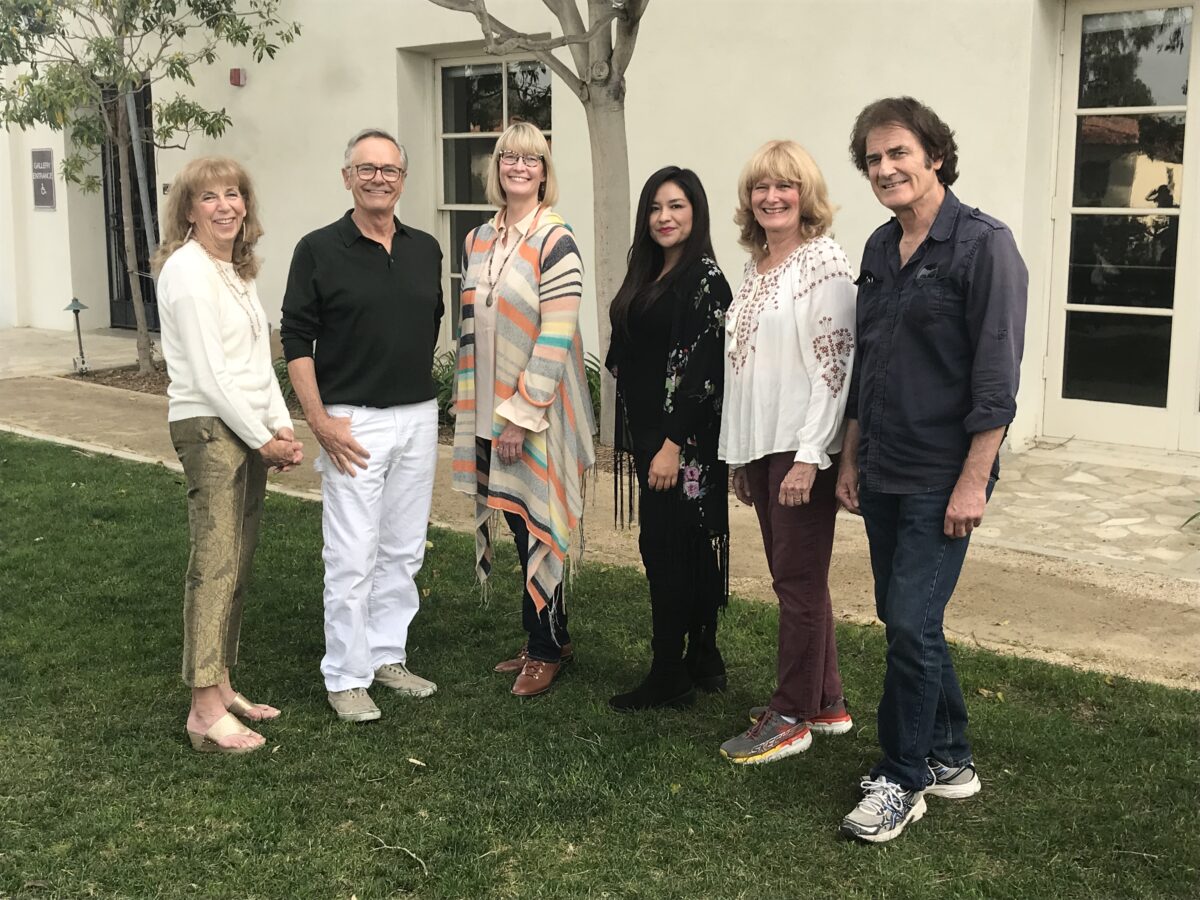 Meanwhile, the idea of holding an exhibition in the Malaga Cove Library kept simmering on the backburner and was finally rescheduled for early 2022. That is, late January through February. It features the original 34 artists who participated in “Are You Thinking What I’m Thinking?” plus six new artists—again, all of them local residents. Your neighbors, in other words; maybe even the person standing next to you at the supermarket. I’ll introduce them to you in a moment.

To quickly summarize, “Are You Thinking What I’m Thinking?” was born from multiple fortune cookies, after the fortunes had been evicted and replaced with random “titles” that were then front-loaded onto a Wheel of Fortune. Each prospective artist came up, gave the wheel a spin, opened the cooking, and the four or five words staring back at them became the title of a work of art, the one that eventually appeared in the show.

There were some stipulations because, after all, this was billed as a “galvanizing art challenge,” the main stipulation being that the artist avoid the purely abstract and create a piece in a style they were not usually known for. Most adhered to this but, being artists, some did not. Apart from that, the works did rise to the challenge of creating works as imaginative as the titles, including “Who’s Whistling at My Antiquities?” and “Waking Up in My Halloween Costume.”

The luck of the draw

The six new participants did not spin a wheel this time, but they did choose a random number that corresponded to a title on our master list. They did have the option to refuse the title and could pick a second number, but if they didn’t care for the second title they were out of luck and couldn’t retreat to the safety of their original pick. Sometimes we have to live with our regrets. 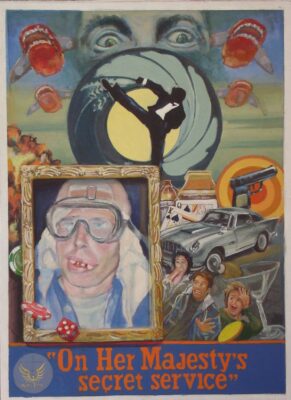 “Kicked in the Mouth by James Bond,” by Mark Fenton

On the other hand, it all worked out well for Georgette Gantner, who didn’t care for “The Texas Chainsaw Manicure” but was moonbeaming with delight over her second title, “Nobody Cooks Dinner for the Man on the Moon.” The other five artists include Ross Moore, Bridget Duffy, Mark Fenton, Marie E. Colmey, and Vicky Vilchis. They were asked about their thoughts and reactions to the title they received and had to work with.

Mark Fenton drew a title that hardly lacks for visual possibilities: “Kicked in the Mouth by James Bond.” So, what did he think about that? “As a motion picture scenic artist working on films and TV shows,” he says, “I’m totally astonished at the synchronicity of having picked this particular theme.”

As he further explains, “I have British heritage on my father’s side, who also had a long career in Hollywood as a well-known screenwriter, having written over 50 films. In keeping with his English citizenship, he joined up with the SAS, the British intelligence Secret Service, during World War II. So, he was connected to being a spy himself. He had a very similar personality and character (as) portrayed in the James Bond films. He was handsome, intelligent, and fearless. If you add to this my extensive dental work and the financial burdens that I just incurred, it is truly fitting that I picked a motion picture poster style to illustrate this theme.” 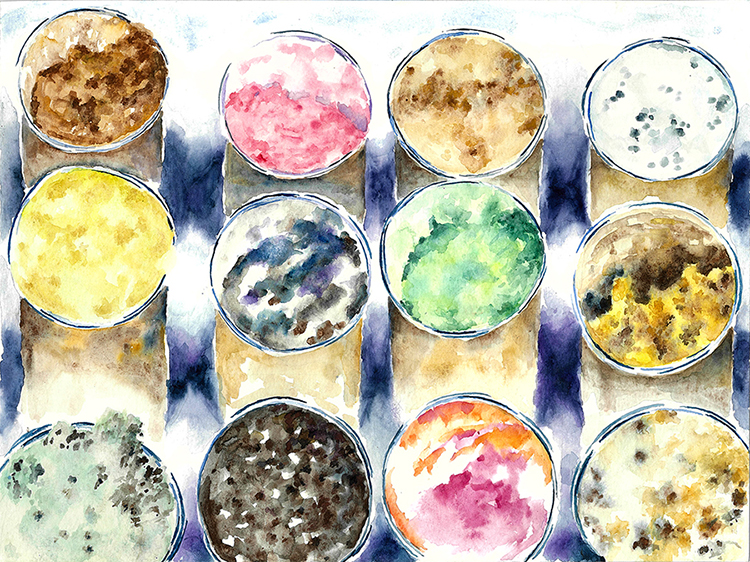 “The Eye is Constantly Moving and So is the Heart,” by Marie Colmey. Which flavor will she choose?

Could it be a trip to Baskin-Robbins? Marie E. Colmey, who actually did have a chance to spin the wheel of fortune cookies (at a demonstration and musical performance event held at the PV Art Center), found herself with the title “The Eye is Constantly Moving, and So is the Heart.” Presumably not moving as in having to pack up and call Mayflower. “My thoughts initially focused on moving eyes and wandering hearts. That night, I went to sleep with an open mind and thinking of my topic—for inspiration of moments in life when eyes cannot stop moving in lockstep with the desires of the heart. This idea popped into my mind that night in my dreams. It represents a simple, innocent, and welcoming time when the eyes are intrigued, and so is the heart. So many flavors of ice cream… and the heart’s desire to have them all! How do you choose just one?” 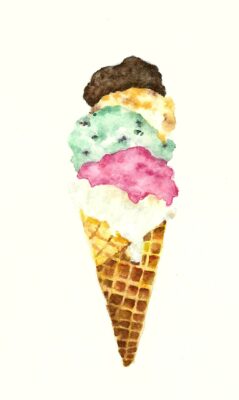 Bridget Duffy seems accident-prone, and so “First the Fires and Now the Rain” is surely apropos. “Wow! Talk about serendipity,” she says, “as to me this theme represents devastation and destruction, then restoration and rebirth.” 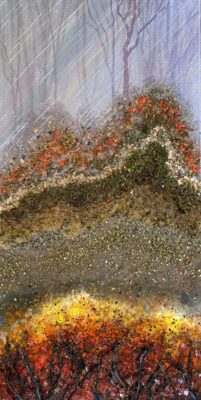 “First the Fires and Now the Rain,” by Bridget Duffy

Bridget’s bad luck has included a severe case of illness due to poison oak (and needing steroids to combat it), having a near project-ending Gorilla Glue mishap, tripping over someone’s backpack while on a trip to Washington, D.C., that required eight stitches in her painting hand, a flooded art studio, and, more severe than all of the above put together, suffering a massive rotator cuff injury. And so, safe for the moment, knock on wood: “Debilitating loss, eradication of hope, to an evolution of faith—there is a final jubilation of triumph over tragedy, futile fires creating debris that pulverizes into nutrients, that magically create new growth and vegetation… and renewal of vibrant life.”

Mulling over his title, “For a Moment, It Seemed Life was Pretty Good,” Ross Moore focused on the “moment,” and he’s captured it perfectly in his picture, which he describes thus: “A transparent figure views an aircraft from an elevated perch at the moment of liftoff. The time between rolling down the runway and actual flight.” It’s a transition moment, not just from the tarmac to the air, but from one place to another, with all the carry-on “baggage” that may be attached to it. Or, as Ross explains:

“All paintings are but a ‘moment’ in time, the period of time between the past and what will be the future. It could be the present, but maybe not. The figure stands in a relaxed contrapposto as it observes the plane on its intended trajectory. Does this person want to be on board? Or is he simply satisfied to watch, amazed at the wonder of flight? I don’t know. I have intentionally left out any signals in this painting so as to allow the viewer to make their own determinations. For this moment thought is suspended and the image exists in the present. And naturally one’s thoughts would presume, life was pretty good.” 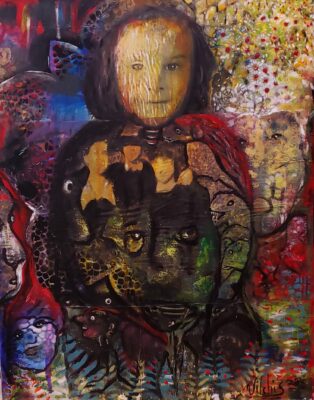 “Walking Lassie through the Louvre,” by Vicky Vilchis

There would seem to be lots of leeway for a title like “Walking Lassie Through the Louvre,” which is the one that Vicky Vilchis received. Many of us might picture the TV star Lassie saluting a Rodin with her back leg or barking at one of Rousseau’s faux jungle scenes, but Vicky portrays her as a girl: “Lassie is walking through the Louvre during the 1920s. The picture in the middle of the body represents her taking photos with her mother and friend. The baby picture represents a painting that is displayed at the museum, but what Lassie doesn’t know is that picture is her and that she is long dead. She is walking through the Louvre, thinking she is alive, but it’s just her spirit and not her in reality.”

From the Louvre to the Moon! As mentioned, Georgette Gantner was more than pleased to fry up a picture based on “Nobody Cooks Dinner for the Man on the Moon.”

“The title inspired me,” she says, “to research what kind of life might live on the Moon, if any. Turns out that there is a form of anaerobic life known as Tardigrada. They are microscopic, 8-legged animals, who survive extreme environments, due in part to a unique protein that protects their DNA from radiation. In the most dire of circumstances, triggered by a dry environment, they morph into a state of dormancy by squeezing all the water out of their bodies and rolling up into a ball until conditions improve.” 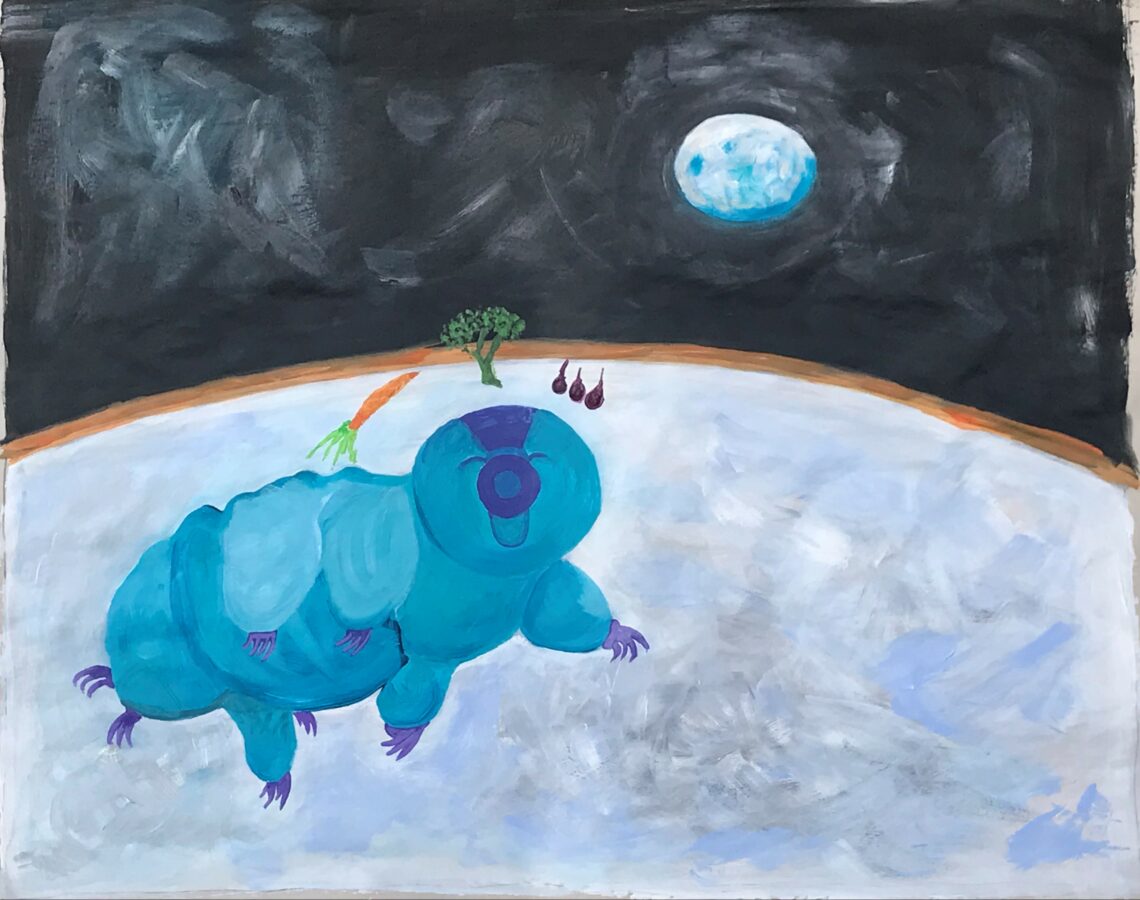 “No One Cooks Dinner for the Man on the Moon” (unfinished), by Georgette Gantner

But how in the heck did they get there?

“An unmanned spacecraft that crashed brought them to the Moon from Earth. Their actual appearance inspired this fantasy: Edgar is just waking from hibernation and he is alone. The newborn are magenta, turning to blue as they mature. If they survive many conflicts, and attain the highest form of knowledge, they may become purple, and therefore, revered. In my painting, he is in the middle of his transformation. Currently searching for others like him, he is having no luck. Edgar has far to go.” And, one thing leading to another, Georgette adds that, “This project has inspired me to write a short story about this character.”

That’s what the show has been about, really, one idea leading to another. Most of the paintings from the previous installation inspired lyrics which were in turn given music and became songs composed by PV resident Brad Webster. You can hear them if you go to www.areyouthinkingwhatimthinking.art and then click on Videos.

Are You Thinking What I’m Thinking? is on view to the public from Jan. 26 through Feb. 28 , in the Malaga Cove Library Art Gallery, 2400 Via Campesina, Palos Verdes Estates. A late-inning reception is scheduled for Saturday, Feb. 26, from 4:30 to 6:30 p.m. Also, each Wednesday (Feb. 2, 9, 16, 23) during the run of the show, from 1 to 3 p.m, various artists and organizers will be on hand to speak knowingly about the work. Awards are being prepared, some of them serious (Best Interpretation, Best Technique), some less so (Most Likely to Be Eaten by Squirrels if Left Out on the Back Porch). Call (310) 377-9584 or visit pvld.org. PEN