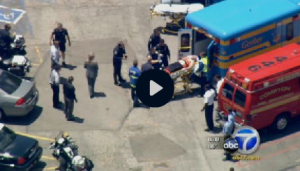 The scene of the accident as seen from a news helicopter.

On May 26, Andrew Garton and Sergeant Rex Fowler of El Segundo were escorting the funeral procession for Manhattan Beach police officer Mark Vasquez, who had died of cancer three weeks before. At around 12:30 p.m., on their way to Vasquez’s burial at Green Hills Memorial Park in Rancho Palos Verdes, Andrew Garton and Fowler’s motorcycles collided while the two were driving southbound on Hawthorne Boulevard near 227th Street. Garton subsequently died and Fowler endured a broken leg.

Manhattan Beach has 45 days, starting when the claim was filed, to decide whether to accept or reject the claim. If the claim is rejected, Garton can choose to file a lawsuit against the city. The claim has been passed on to the city’s third party administrator, AdminSure, for review, said City Attorney Roxanne Diaz.

In the claim against El Segundo, Garton alleges that the city “negligently, carelessly, recklessly” operated and monitored “the motorcycle driven by Rex Fowler which collided with (Garton), causing his death.”

Fowler said that because the issue is being litigated, he’s “unable to comment about this tragic accident, which affects so many lives in the law enforcement community.”

The city of El Segundo is currently reviewing to claim to determine how to respond, said El Segundo City Attorney Mark Hensley. “This isn’t some tree root that damaged somebody’s driveway,” he said. “I can’t say there’s any specific formula for how we would respond to a claim of this nature. It’s pretty unique as far as the amount in the claim.”

Both claims argue that the loss of her husband has left Tracy Garton with the loss of his love, companionship and financial support.

Manhattan Beach has been faced with other legal obstacles in recent months. Geoff Dolan, former Manhattan Beach city manager of 15 years, filed a lawsuit against the city of Manhattan Beach for breach of contract and invasion of privacy rights based on the city’s disclosure of records that Dolan argues were confidential, after the city rejected his $2 million claim for damages, which he filed in May.

Former city attorney Robert Wadden filed a $1.5 million claim against the city in September for age discrimination, breach of contract, defamation and interference with economic opportunity. On Nov. 3, former Manhattan Beach police officers Eric Eccles and Kristopher Thompson, who were fired in March for their alleged involvement in an off-duty traffic collision, each filed a $10.3 million claim for damages against the city.

“It’s a matter of coincidence, I don’t read into anything into the fact that we’ve received these claims at the same time,” Diaz said. “If you look at the claims, they’re all very different, there’s no pattern to them.”