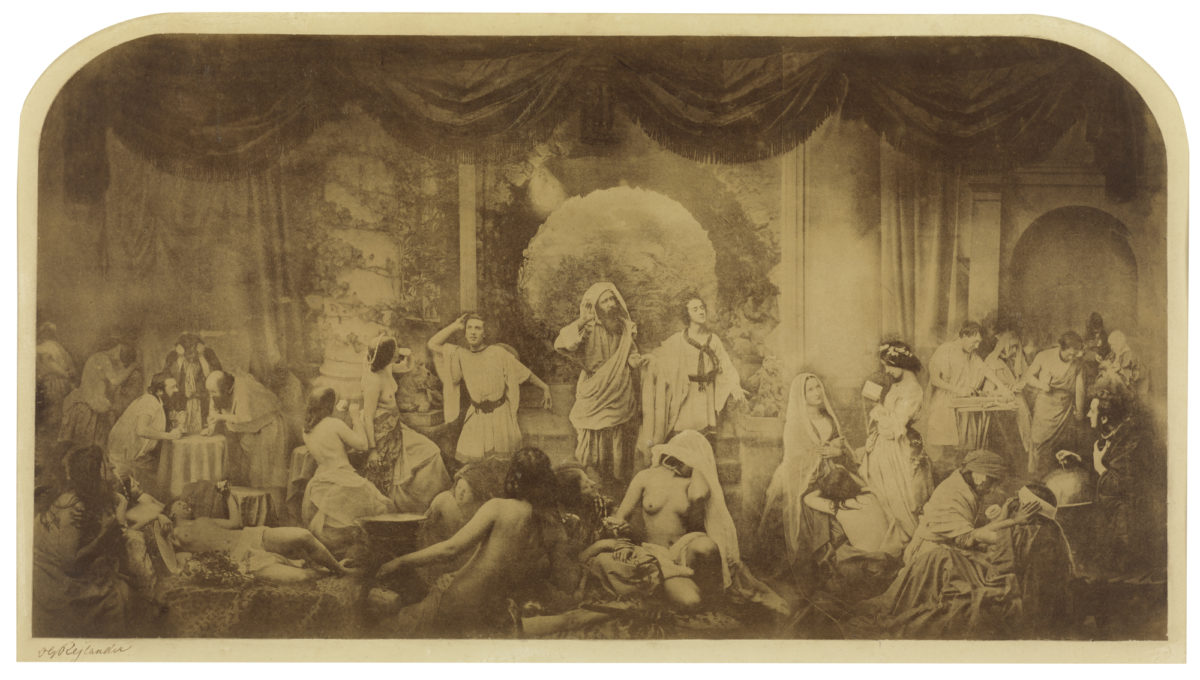 Some artists are born a little too late and some are born a little too soon. Those born at just the right moment can hold out their arms and receive the accolades. Oscar Gustaf Rejlander (1813-1875) might have found a job in the motion picture industry creating special effects had he been born at the end rather than at the beginning of the nineteenth century. 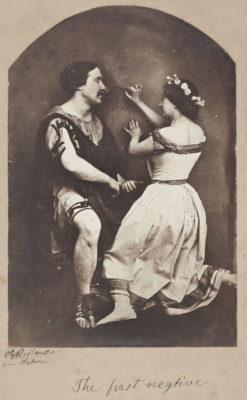 “While his work typically has been regarded as a detour from the continuum that saw the history of photography as a series of developments of objective documentation,” Lori Pauli says of Rejlander, “his photographs have important relevance to today’s artists who combine and rearrange images through the use of digital tools instead of glass-plate negatives.”

Or as Marc Meyer, director and CEO of the National Gallery of Canada, phrases it, “Rejlander’s conviction that photography was a medium of artistic expression would be shared by succeeding generations of photographers. For this reason, he has often been bestowed with the title ‘the father of art photography.’”

And, in an aside shared by Pauli, “the grandfather of Photoshop.”

Pauli is the curator of photographs at the National Gallery of Canada in Ottawa, where “Oscar G. Rejlander: Artist Photographer” originated before coming to the J. Paul Getty Museum, and where it will be on view through June 9. It’s a fairly comprehensive exhibition with 150 photographs, plus paintings, drawings, and prints. There’s even more in the handsome catalogue that accompanies the show, published by Yale.

Rejlander, whose early years are veiled in mystery, arrived in England from Sweden in 1839. He was an accomplished artist, drawing and painting portraits in order to make ends meet. “Rejlander did not establish himself as a photographer until 1853, at the age of thirty-nine, when he had been living and working as an artist in England for over a decade,” writes co-curator Karen Hellman. “He operated four photography studios in his lifetime: the first in the industrial Midlands town of Wolverhampton from 1853 to 1862, followed by three studios in London between 1862 and his death in 1875.” 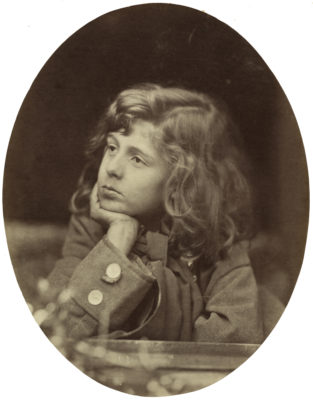 After a brief period of shooting landscapes, country manors, etc., Rejlander was quickly drawn to the idea of “double printing” or combination printing, what we might label collage or montage. He wasn’t the first to attempt this, but he seems to have pursued it more diligently. He understood its possibilities early on.

“The year 1857 was one of the most important and prolific ones in Rejlander’s career,” Pauli writes. And the highlight of that year? “Considered a masterpiece of photographic production when it was first displayed, ‘Two Ways of Life’ was made using over thirty negatives, capturing both public and critical attention.”

A year later, however, Rejlander appeared “to have been both spiritually and financially defeated by the criticism aimed at his attempts at producing ‘art photographs’ in general and at ‘Two Ways of Life’ in particular.”

What happened? Professional photographers applauded “Two Ways of Life,” but amateur photographers, it seems, were more likely to condemn it. The partial nudity of the draped female figures was an issue with some viewers, wondering if the models were prostitutes because, judging by the picture itself, they’d been photographed in the presence of men, and of course no self-respecting woman would… Well, let’s not forget that this was the Victorian Era and not San Francisco during the Summer of Love. In reality, the women were photographed in the privacy of Rejlander’s studio, by themselves or with one or two other women. They certainly weren’t photographed on a soundstage with 50 extras looking on. 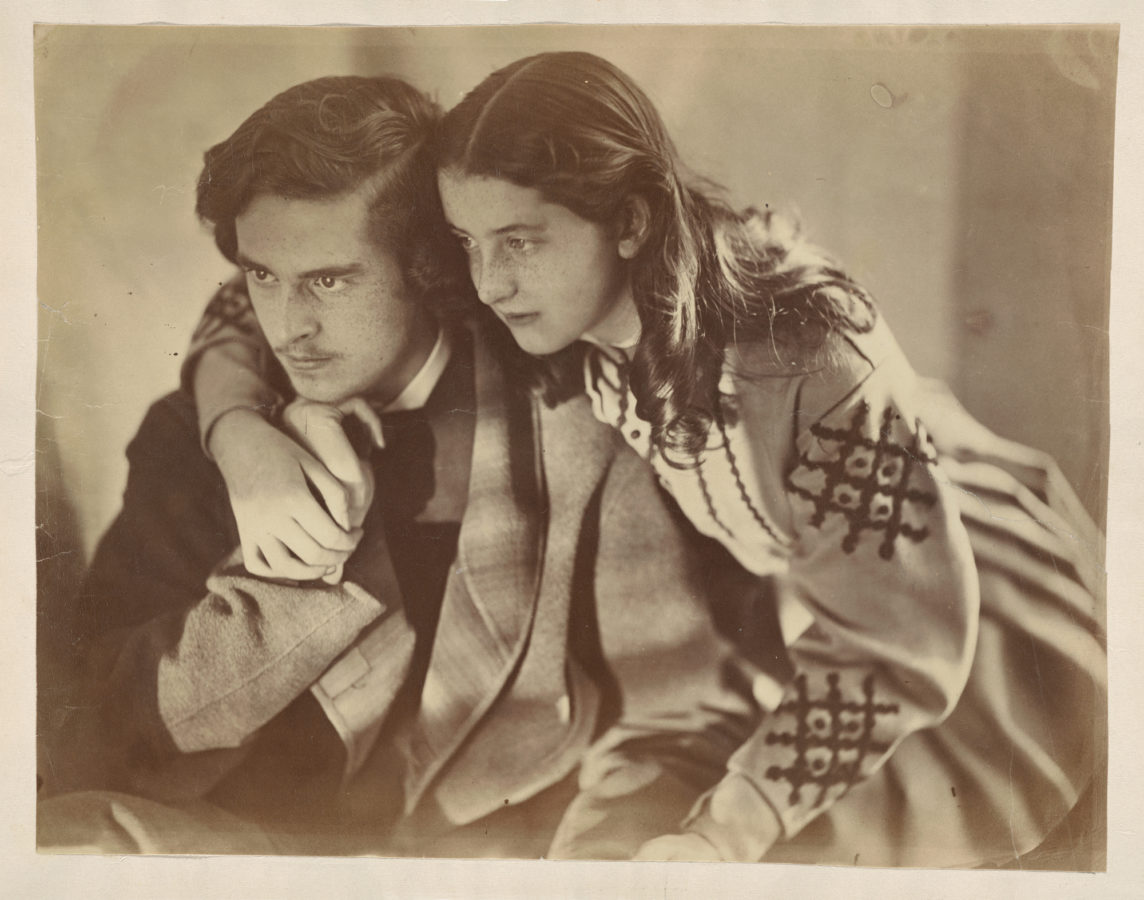 “I regard art as a means of making thought visible,” Rejlander wrote in 1867. “If I can make a thought visible in a picture which people can understand, and be moved by it to laughter or tears, it is a work of art… It is the mind of the artist, and not the nature of his materials, which makes his productions a work of art.” 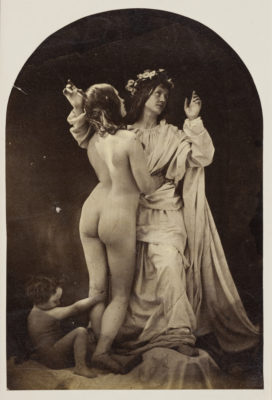 One of the many things that distinguishes Rejlander from other photographers of his time was his ability to capture what might be termed fleeting expressions: smiles, laughs, cries of joy or distress. In his essay included in the catalogue, Phillip Prodger writes that “throughout the 1860s Rejlander was arguably Britain’s greatest pure portraitist. His ability to render pictures with genuine psychological charge was all but unrivalled during this period. While the majority of studios churned out comparatively stiff, wooden portraits, through Rejlander’s lens sitters seemingly came alive.”

This ability came to the attention of no less a person than Charles Darwin, who was seeking photographs that captured an array of facial expressions. Not forced gestures, but, insofar as possible, spontaneous expressions. The two men corresponded and worked together, the result being that 18 of the 30 photographs included in Darwin’s 1872 book, “The Expression of the Emotions in Man and Animals,” were taken by Rejlander.

One of Rejlander’s models, Mary Bull, later became his wife and studio assistant. She was 23 when she married the 48-year-old photographer, and outlived him by nearly four decades.

What is clear from scanning his work, and which still emerges 150 years later, is that while Rejlander was a serious man, he also possessed a sense of humor. There are also many visual puns and the titles of his pictures often seem wry or tongue-in-cheek.

Shall we credit the cat, too?

As mentioned, Rejlander was quick to realize that photography could be an art form unto itself (a belief not so commonly held back then), but he also saw that photographic studies could be of help for painters. And there were, in fact, painters who acquired work of his specifically for this purpose, although it was not yet customary to admit that one was being aided by such material from a different medium. 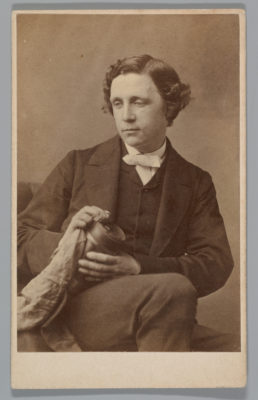 On the other hand, Rejlander did connect with and mentor other photographers, Julia Margaret Cameron, in particular, as well as Lady Clementine Hawarden and Charles Lutwidge Dodgson, the latter better known as the author Lewis Carroll. These relationships are discussed by Jordan Bear in the catalogue.

On a lighter note, Hellman points out that on at least one occasion Rejlander used his cat’s eyes as a light meter. “Bringing the cat (probably unwillingly) into the studio space and gauging the number of seconds required for exposure based on the thinness of the cat’s irises in the studio light was an unprecedented form of a light meter.”

In addition to his reputation for capturing fleeting emotions at a time when shutter speed demanded that one hold perfectly still, Rejlander also documented many everyday types of people, sort of what Irving Penn would do in the 1950s, and also the street urchins, the homeless kids who were often ignored or chased away. Some of Rejlander’s finest images are of these young people, who otherwise would quickly have been lost to posterity. Not many other photographers were thinking along these lines.

He’d had his successes, but fortune is always fickle, especially for artists, and, in poor health and financially strapped, Rejlander died at the age of 61 in 1875. Despite what he’d heralded and accomplished, Pauli writes, “By the turn of the century Rejlander’s name was rarely mentioned in the photographic community.”

Since the 1970s, this has been partially rectified, but clearly, due largely to Pauli’s research and the breadth and depth of this exhibition, Rejlander is again in the public eye. And that’s nice, for however long it lasts.