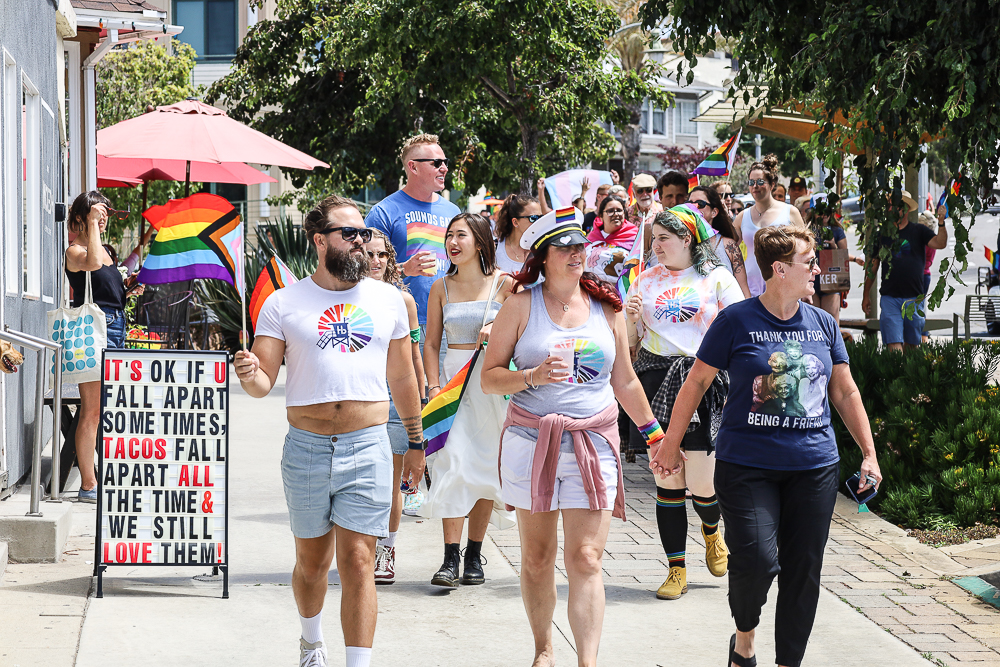 A parade down Pier avenue to the beach, followed by speeches at the rainbow-painted lifeguard tower on Saturday morning; and a surf session Sunday morning highlighted the second annual Hermosa Pride Festival.

Pride Festival organizer Randy Renner began remarks to the estimated 200 people who gathered  at the rainbow tower by urging attendees “to fill our hearts today for tomorrow’s fight. What happened yesterday was not great, but we can fight it,” he said, referring to the Supreme Court overturning of Roe Vs. Wade on Friday.

Renner then introduced Hermosa Beach Mayor Mike Detoy as someone who “has been with us from the start.”

Detoy noted that women’s reproductive rights remain protected in California, but said efforts must be made to protect women’s rights in neighboring Arizona and other states.

Detoy was followed by Tyler Wilde, the subject of  “Gender Outlaw,” a documentary about the transgender body sufer finding acceptance by the Gillis Body Surfing Association.

Wilde recalled the difficulty he experienced when he moved to the South Bay in 2005, in meeting people “who shared my experience.”

“This is why this tower matters. Visibility matters. But only if it’s followed up by action,” he said.

Renner, after thanking Wilde for his appearance, quoted a statement Wilde makes in “Gender Outlaw:”

“I don’t really identify as a man or woman. I identify as everything and nothing, all at once. Some people say it’s a spectrum. I don’t even subscribe to that. It’s like a galaxy, and there’s just like an infinite amount of ways to be a human. And I’m just one little star.”

Ashley Tull told the gathering, “I’m usually the angry one. I come from a town where the mayor would never have met me at a rainbow tower, where my parents would never have come to the beach to support me.”

But she was able to set her anger aside in Hermosa, she said, because, “I can walk through Hermosa and never worry about being hurt.”

Kristin Key, a sixth place finisher on “Last Comic Standing,” said she moved to Redondo Beach from a similarly intolerant town in Texas.

The comedian closed the gathering  by singing a song about “french fries, something everyone can agree on.” she said.

The Pride Festival weekend began with a welcoming happy hour Friday evening at The Stanton, followed by a screening of “Gender Outlaw,” and a drag show. Saturday night, celebrants filled the parking lot at Vista, on the Strand, for a silent disco. The festival ended Sunday at St. Cross Episcopal Church with a screening of “My name is Pauli Murray.” Murray was a non-binary Black lawyer, activist and poet. ER