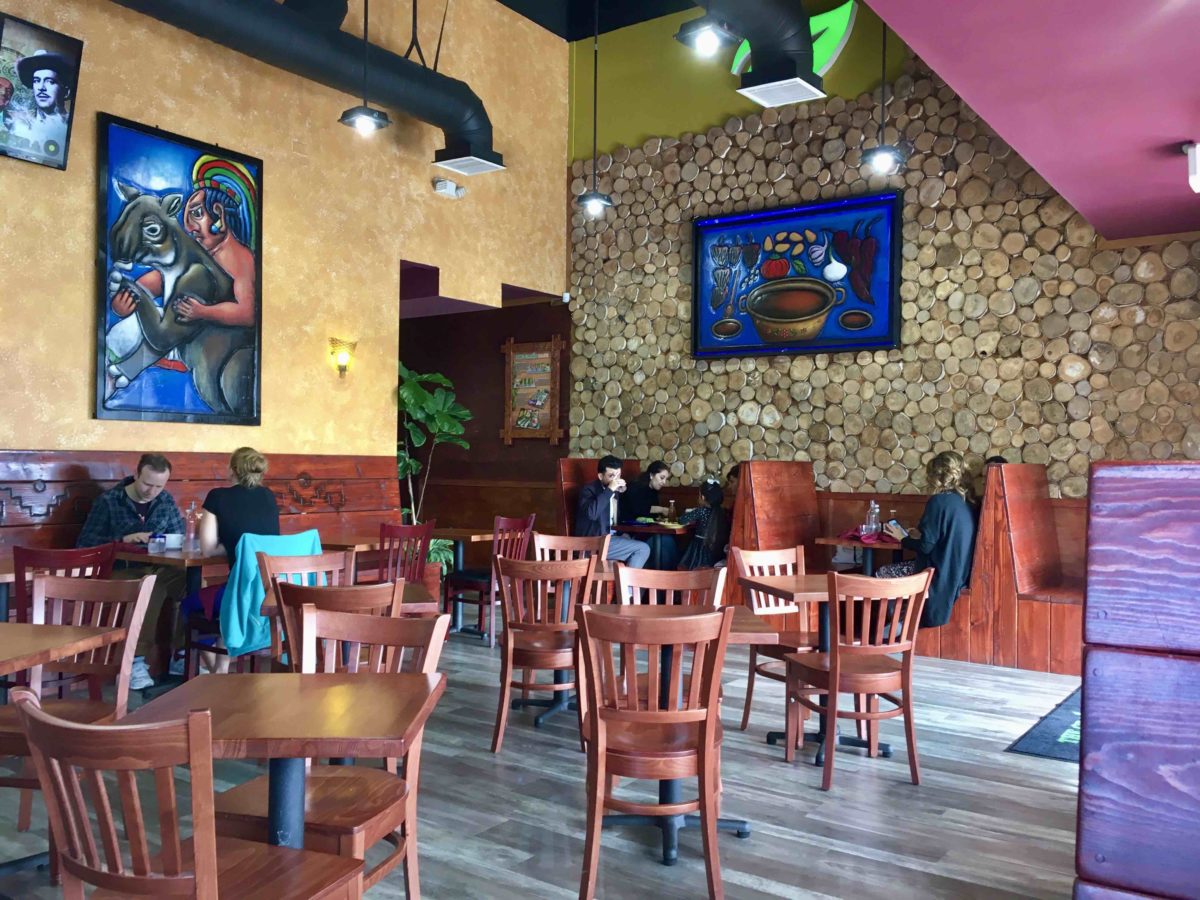 The Grain Cafe’s dining room is decorated with an eclectic mix of rustic and Mayan motifs. Photo by Richard Foss

As you walk into The Grain Café in Redondo, you see a large painted and carved image of a Mayan cuddling a tapir, a Central American animal that resembles a cross between a pig and a miniature elephant. This is an unusual image because tapirs aren’t generally companionable, and are aggressive when defending their territory. When asked about the image, a server said he thought that it is intended to show that love can conquer all barriers.

One reason for that affectionate embrace might be that if they’re dining at The Grain Café there is no chance the tapir will be an entrée because there are no animal products on the menu. The food is organic, vegan, and remarkably varied, with American and Mexican favorites alongside pizzas and a smattering of Middle Eastern dishes. On three visits I’ve sampled several items and been impressed by how many things work just as planned.

The Mexican dishes happen to be my favorite, though the guacamole is a weak spot – it is served in small portions and tastes only of avocado and citrus, with no detectable onion, cilantro, or chile. If it comes with a dish I wouldn’t remove it, but I wouldn’t go out of my way to have it again. Timid seasoning isn’t a problem with their other Mexican sauces, though. While not aggressively hot, the mole and salsa roja both have a gentle heat and rich savory spice blend. Those who like it fiery can add a dash of the house-made hot sauce, which is zippy, indeed. 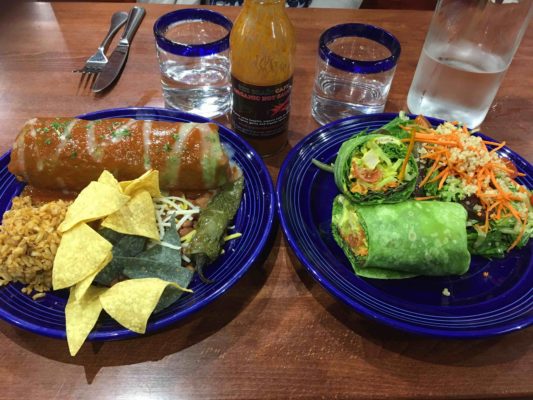 A falafel wrap and a burrito at the Grain Cafe. Photo by Richard Foss

My taste of the mole was sauce on a burrito filled with zucchini, mushrooms, onion, and other vegetables along with the house-made veggie burger. That burger adds more texture than flavor as far as I can tell, but gives an omnivore like me the illusion that they’re having a traditional meal. Veggie burgers are getting closer and closer to being indistinguishable from the real thing, and vegan cheese is making similar progress. They use Daiya here, which looks and melts like traditional cheese. It doesn’t duplicate premium cheese, but compared to veggie cheeses of a decade ago, it’s a remarkable advance. I’d go so far as to say the burritos here are considerably better than many traditional versions around the South Bay, and easily the best vegan version I’ve had.

I was also impressed by the chilaquiles, which isn’t usually a favorite item for me. Layering the corn chips with zucchini and mushrooms made the dish more interesting, though I would have preferred just a bit more of the red sauce. Some people make chilaquiles dry, some layered so the corn chips are stewed, and this leaned toward the dry side. I was pleasantly surprised by their tofu-based version of sour cream, which was a bit sweeter than the genuine article but finished the dish nicely.

We tried the chilaquiles at a breakfast where my wife tried their veggie crepe, which had no surprises and was well executed, and served with crisp rosemary potatoes on the side. Our beverages were less successful because the default coffee at breakfast is the type called café de la olla in Mexico and contains canela cinnamon balanced with brown sugar and orange peel. Perhaps the coffee had been sitting for a while and the cinnamon took over, but we couldn’t taste the coffee under the cumulatively bitter spice. They brought freshly made coffee without cinnamon when we requested it, and that was fine. Customers should be offered the choice between regular coffee or the Mexican version rather than finding out the way we did. 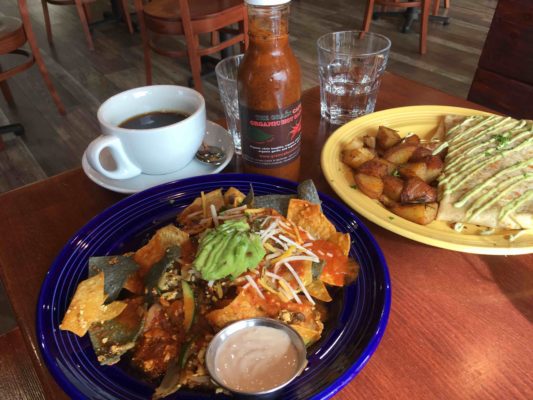 Chilaquiles and crepes are breakfast favorites at the Grain Cafe in Redondo. Photo by Richard Foss

On other visits I tried their falafel and a “chicken curry wrap” (and I probably should have called that a “chicken” curry wrap, but once you understand what they’re doing here, you mentally insert the punctuation as you read). The “chicken” in the wrap was less convincing than their burger, but that was fine because its real purpose was to add texture to the mix of raw veggies and sauce inside the spinach tortilla. That curry was very mild and slightly sweet, the pale yellow mid-American version without a hint of chili that was first popular in the 1960s. It was exotica then and it’s comfort food now, but it’s still good. If you want spicy and authentic Indian curry then Bollywood Zaika is just across the parking lot, but if you’re in a mood for mild but flavorful, this will make you happy. The big wrap came with a green salad, garnished with a sprinkling of steamed bulgur wheat. It was a substantial lunch that didn’t leave you feeling overstuffed afterwards.

Another standout was the falafel wrap, which was made with baked rather than fried vegetable patties. I usually prefer the texture of the fried version, but these exceeded my expectations. Baked falafels are often gummy or crumbly, but were neither, and while the house-made hummus and tahini were a little light on the garlic, a dab of that housemade hot sauce came to the rescue again and gave the wrap a nice kick.

For dessert they offer a variety of cakes, some gluten free and all without eggs or dairy. It’s possible to make cakes without eggs and butter, as Italians do in some olive oil cake recipes, but the result is usually like a dense pound cake. We tried slices of chocolate and berry-almond cakes and found them to be exceptional when it comes to eggless cakes – had I not known they were dairy and egg free I wouldn’t have guessed. They don’t surpass the best cakes that include eggs and butter, but they’re as close as I’ve ever had.

Products for vegan cooking and the skill with which they are used are both on the rise, and the day when vegan cooks will have the whole arsenal of flavors and textures available to them draws ever closer. If you have been avoiding vegan food except when you are dining with a houseguest or friend who doesn’t eat meat, you should know that times have changed. Vegan food now is lighter, livelier, and more creative than it has ever been, and whether or not you have an ideological reason for trying it, you should check out The Grain Café.