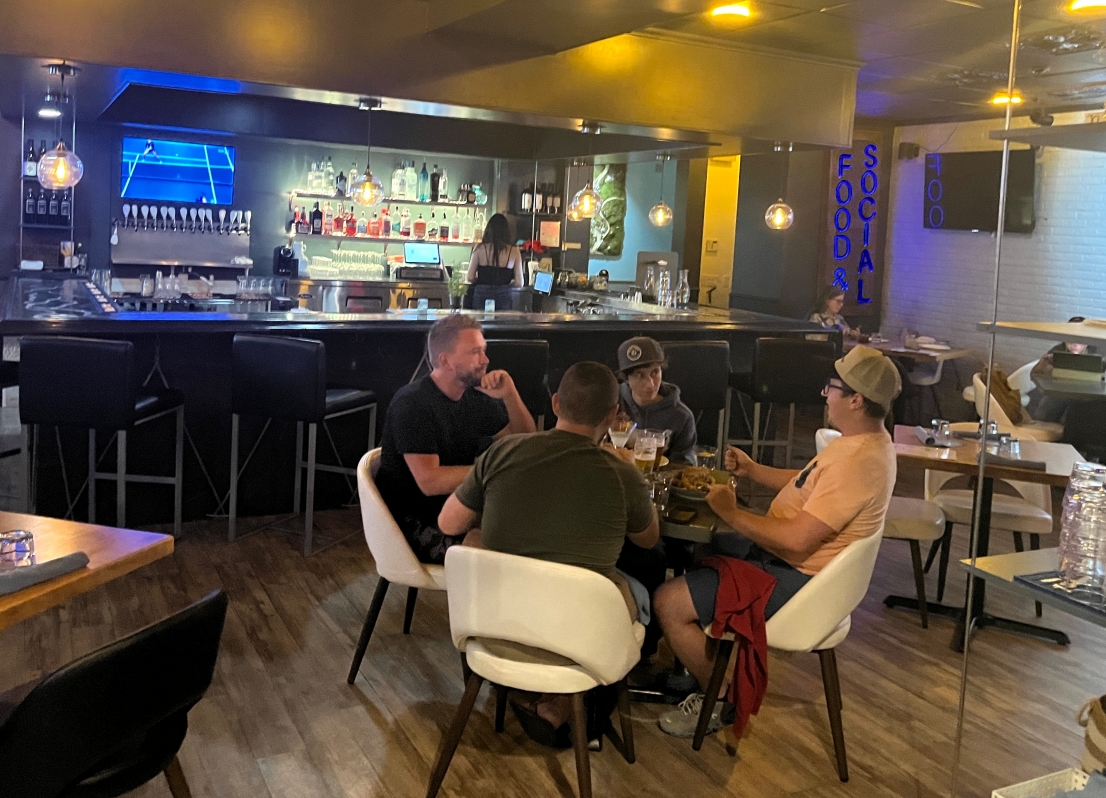 The interior at Perfect Storm has touches of midcentury modern style and is a comfortable place to linger after a meal. Photo by Richard Foss.

Perfect Storm gets it right after transforming from Table Manners

One of the more dubious honors presented by the NBA is the annual “Most Improved Player” award. It has been noted that the easy way to win something like this is to start out terribly, and then raise your performance to average or slightly above.

I have never given an award like this, but if I was inclined to, I know who would get it. I reviewed Table Manners in Redondo in 2021, and found both visits to be among of the least enjoyable dining experiences of the year. Ordering was via an app, and was chaotic despite the staff’s best efforts. The decor was austere, the furniture uncomfortable, and portion sizes and food quality varied widely. There were glimmers of creativity in the preparations, and some well-made items, but overall it was unsatisfying.

When I heard that Table Manners was opening a  restaurant-within-a-restaurant called Perfect Storm, I thought it was a joke – who would name a restaurant after a disaster movie? Despite hearing from a friend that the dining experience was enjoyable, I visited with low expectations.

When I arrived, I noticed the restaurant’s branding had changed entirely – rather than two restaurants there was one, and it was Perfect Storm. The stark walls had been repainted to a cooler gray, the uncomfortable metal furniture replaced with comfortable, mid-century style chairs, and staff members welcomed visitors with real menus. The menu items were seafood-centric as promised, though some of the more successful items from the previous incarnation of the place were still there.

We decided to start with a salmon panzanella salad and a crabcake, both of which were quite different from the traditional version. Crabcakes are usually made with crabmeat and an egg-based binder, and are either fried or broiled, but this was baked. It was only a crabcake by the broadest definition — it had no egg mixture, so it was a pile of loose, lightly seasoned crabmeat served along with a good tartar sauce, cole slaw with apple, and a roasted lemon. When mixed together, the slaw and crab made a nice crab salad. I observed to our server that some people who like conventional crabcakes wouldn’t like this because it didn’t fit their expectations, while some people who would like it won’t order it because they don’t like the seasoned version, and he agreed.

The panzanella salad was unconventional too – this item evolved in poor Italian households to use up stale bread, which is toasted and mixed with ripe tomatoes and lettuce with a vinaigrette. It’s usually about half bread by volume, and heavily dressed, but at Perfect Storm we were served a spinach and Kalamata olive salad topped with a large piece of grilled salmon. There were some tomatoes, but they were roasted rather than raw, a little purple kale and red onion, and the dressing was lightly applied. It was a very good salad, but not a panzanella, and like the crabcake it defied expectations.

We paired our starters with cocktails, a bourbon-basil smash and a Boulevardier. The smash is a cousin to a julep, made with housemade basil syrup and recommended for those who like drinks with fresh green herb flavors. The Boulevardier is a Negroni made with Bourbon rather than gin. Here they use Amaro Lucano rather than Campari, which gives a deeper, more complex flavor. Both drinks were very well made and nicely balanced. We switched to wine with our mains, and chose Indaba South African Chardonnay and a Spanish Albarino to pair with our seafood. 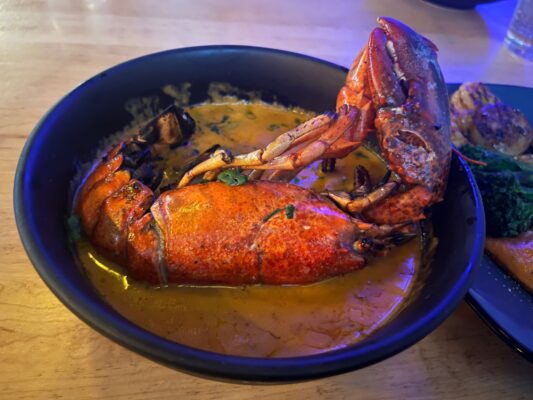 Lobster is a specialty at Perfect Storm, and on some days is offered on an all-you-can eat basis. We declined that option, but my wife ordered a bowl of lobster bisque that arrived with a whole small lobster nestled in the bowl. The stock was buttery, and herbal with some sherry flavor and chunks of meat, very good though cumulatively a bit salty. The lobster tail had helpfully been split after being boiled and briefly grilled, and was moist and flavorful.

I chose a grilled seafood combo composed of salmon, two large shrimp, and a plump scallop, with mashed potatoes and grilled broccolini on the side. Whoever is running the grill knows their stuff, because it was all simply seasoned and nicely cooked. The broccolini had a little grill smokiness, and the coarsely mashed potatoes had a little butter and seasoning, just the way I like them.

We finished by splitting a big piece of buttercream-frosted carrot cake that was topped with toasted coconut, a homestyle finish to a meal that balanced creativity and emphasizing the simple virtues of good ingredients.

Dinner for two with two cocktails, and two generous pours of wine ran $210, not bad at all for a seafood meal near the beach. Perfect Storm is an almost completely successful reimagining of a place I had written off. After this visit I found myself wanting to return and explore more of the menu.