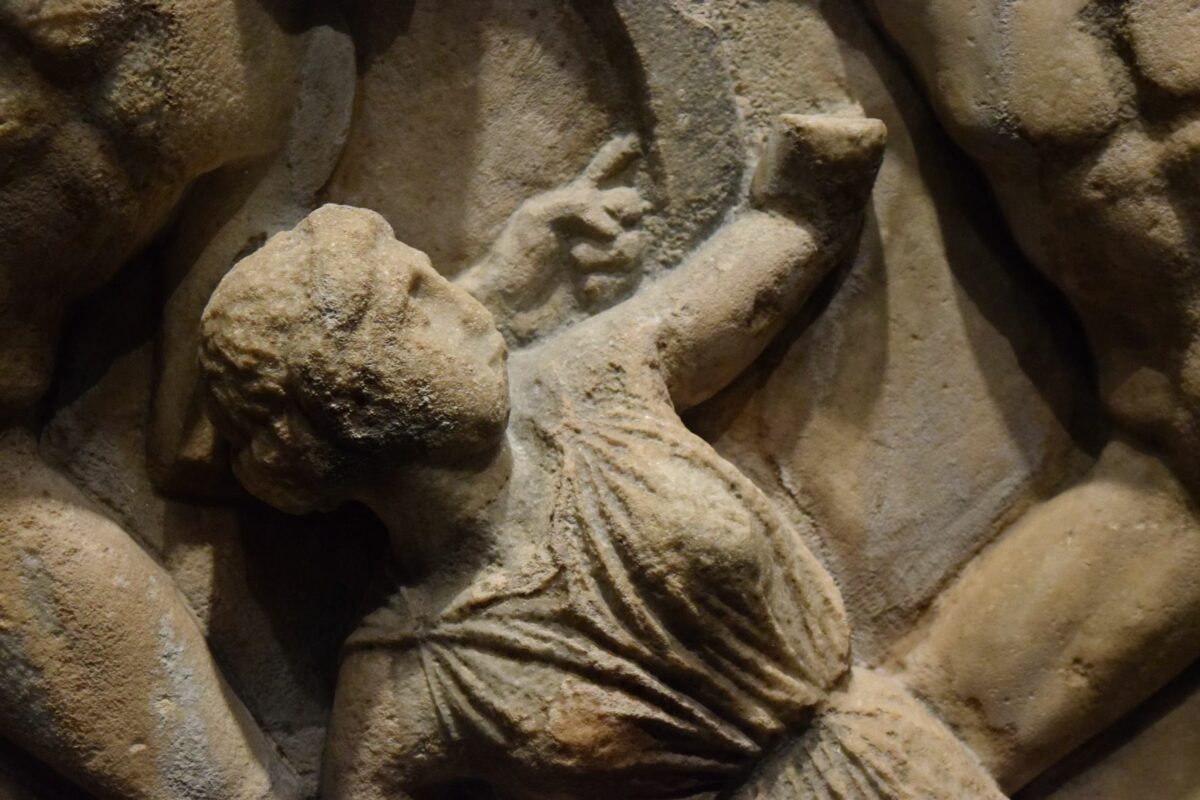 In the court of the crimson king

“Persia: Ancient Iran and the Classical World” at the Getty Villa

The more you learn, the less you know. We’ve all heard of Caligula, Claudius, Nero, Hadrian, and Marcus Aurrelius, but most of us, I assume, will scratch our pates at the mention of Arsaces, Phraates, Oredes, and Vologeses. 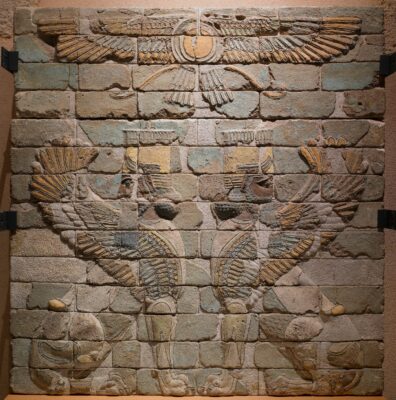 The current endeavor, accompanied by a (cliché alert) door stopper of a catalogue, covers roughly 1200 years and delves into the relationship between Persia (present-day Iran with wings of additional territory). We’re introduced to the Achaemenid Empire (550-330 BC), swept into the Parthian Empire (c. 247 BC-224 AD), and dropped into the Sasanian Empire (224-651 AD). In other words, the Empire State isn’t New York.

In 651 the Arabs settled in, and that’s a different movie.

The exhibition, on view through August 8, is co-curated by the Getty’s director Timothy Potts, senior curator of antiquities Jeffrey Spier, and assistant curator Sara E. Cole. As with “Beyond the Nile,” they rounded up an array of scholars and shepherded into the catalogue a dozen or so articles, most of which made my head spin like Linda Blair’s in “The Exorcist.” I mean, they’re well-researched and brainy to the max, but as hard to digest as porcupine quills. 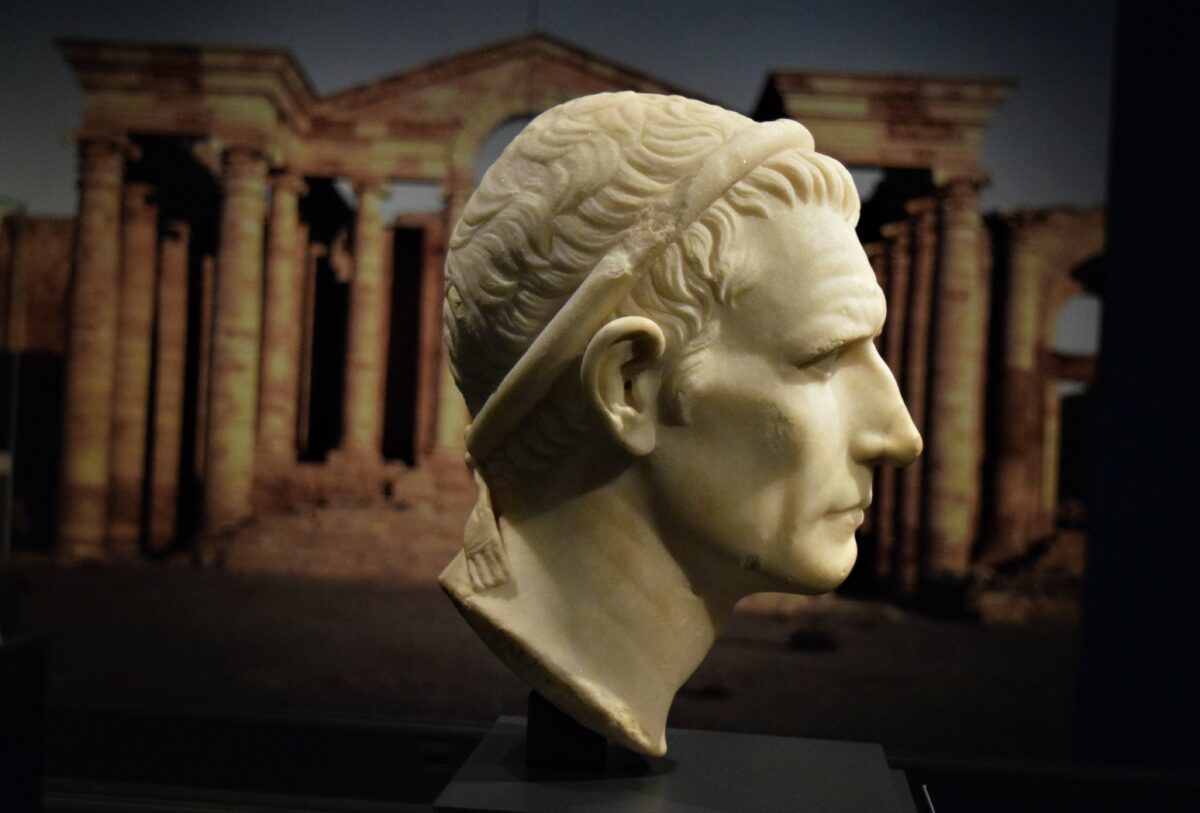 Here’s what Potts and Spiers have to say:

“The works of art shown in this exhibition are primarily expressions of political power, glorifying king and empire. The Persians, Greeks, and Romans each carefully constructed their own political, military, and cultural images as well as those of their adversaries.”

Let me drive this home a little more, in the words of Stefan R. Hauser:

Circa AD 193, the King of Kings, he writes, with “large numbers of troops at his disposal,… offered the Roman general Vespasian forty thousand archers as support in his quest to become emperor. The combination of mounted archers and ‘cataphracti,’ a highly specialized group of armored riders whose aim was to attack the enemy infantry in close order and to break its lines, was the backbone of the Arsacid army. The existence of many thousand ‘cataphracti,’ whose training and equipment indicate full professionalism, attest to the existence of a standing army.”

Replace and substitute a few names and you’ve read this in yesterday’s New York Times. 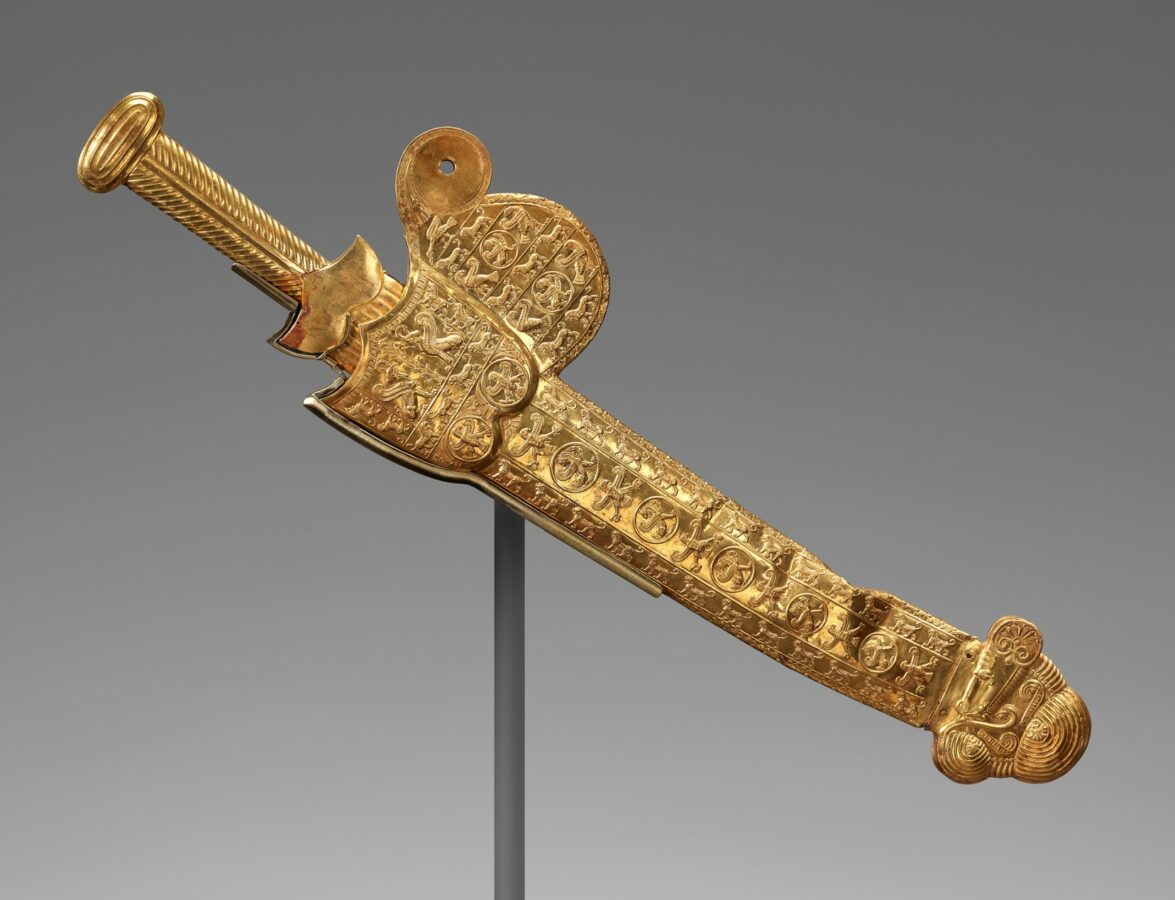 By the way, who were those Arsacids? “The Arsacids were one of the most resilient dynasties in Near Eastern history,” with an empire that spanned the territory from the Euphrates to the Indus. They co-existed with the Roman Empire.

When we say “The Roman Empire,” most of us can picture the geography—all or parts of modern-day Italy, Greece, and Turkey. But all those tracts of land to the East? How many of us can flip to our Rand McNally and immediately pluck out the ‘stans: Afghanistan, Pakistan, Turkestan, Kazakhstan, Uzbekistan, Tajikistan, and all the rest?

I’m not sure how many objects are on display. The catalogue explicates 209, but several of them aren’t on view, and others, like coins, are pretty hard to examine with the naked eye. Speaking of coins… 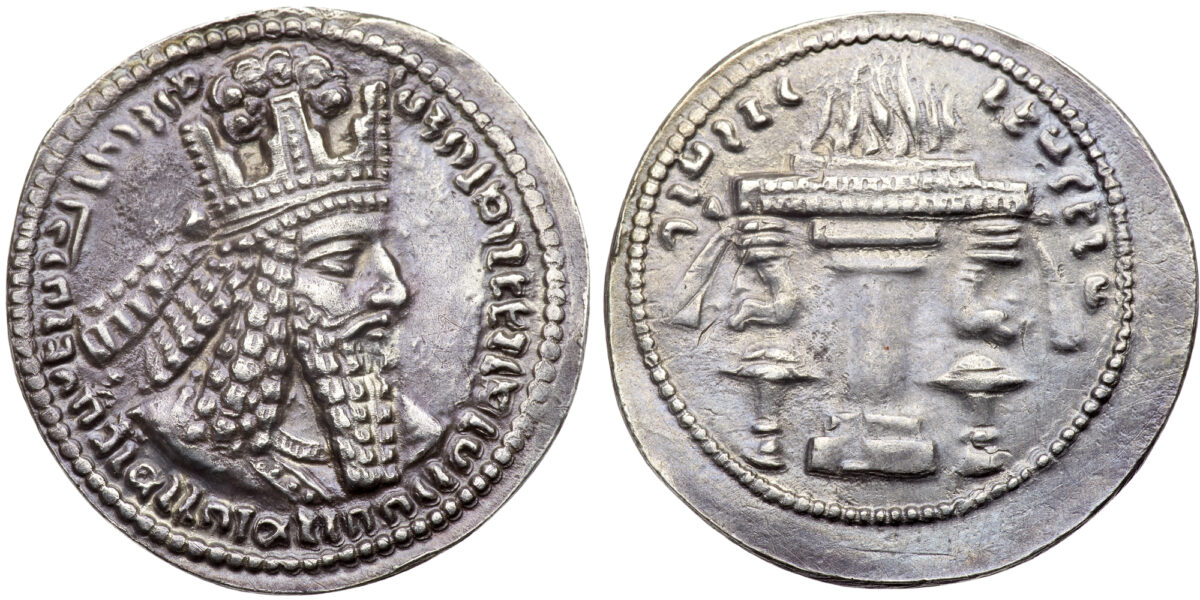 Halfway through the book, Rolf Strootman says: “The Greco-Bactrian Empire soon fragmented into smaller kingdoms with rulers today known most of all for their remarkable coinage, which often provides the only evidence of their existence.”

Let me break that down for you. Two thousand years from now, when archeologists from Arcturus are sifting through the ruins, they’ll dig up the remains of ancient J.P. Morgan Chase and Wells Fargo and Citigroup bank vaults and semi-melted coins with the visages of our own emperors: Washington, Jefferson, Lincoln, and empresses, maybe Kamala Harris, who knows. That’s how they’ll piecemeal our history. Sort of like that book by David Macaulay, “Motel of the Mysteries.” Check it out. 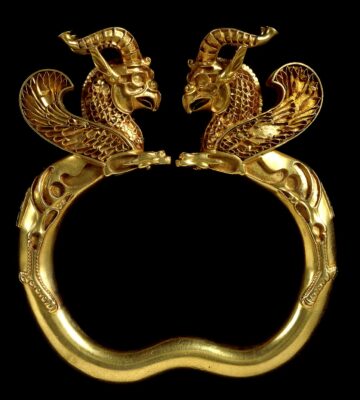 “Bracelet with Griffin Terminals,” Achaemenid, about 400 BC; Gold, once inlaid with semiprecious stones; British Museum, London. © The Trustees of the British Museum

So here’s how we can sum up what’s on display at the Getty Villa: Old stuff washed up on the shores of time. And not necessarily the good stuff, either. No Valentine’s Day cards, no love poems, no gladiator championship ticket stubs, no classroom assignments. Just a lot of coins (which no vending machine will take), some drinking vessels, and parts of a dining room wall. Okay, okay, and other impressive artifacts as well.

However, there’s another really good reason why you should see this show.

Until now, no one’s ever read the words “Getty Villa” and “thrill ride” in the same sentence. What the Getty is calling the “Palace Experience” I’ve dubbed “Persepolis: The Ride.” This is a five-minute animated film, actually a 3600-degree HD experience, which sort of reminds me of California Adventures’ “Soarin’ Around the World.”

Villa visitors (a separate advance, timed ticket is required—free and available online) step into a small circular gallery and suddenly you feel like you’re being whisked away on a sliding, skimming disc or, better stick to the theme, a flying carpet straight to the gates of Persepolis, the ceremonial capital of Achaemenid Persia, the largest empire of its time, founded by Darius I around 518 BC.

The palace grounds, in utter ruins today, have been reimagined as they might have looked in their heyday, and boy is it splendid! And of course very sad. As George Harrison told us, “all things must pass.” Just as today, when we see ancient heritage sites ruthlessly and senselessly destroyed, so was Persepolis put to the torch.

One can look at and brood over these vanished civilizations and write: Then an asteroid hit, and they all perished. A self-inflicted asteroid.

For those who’ve read this far and now want some idea of the narrative recreation, there’s an online digital experience that can be savored, which escorts us through the various chambers of the palace. You’ll find it at getty.edu/persepolis. 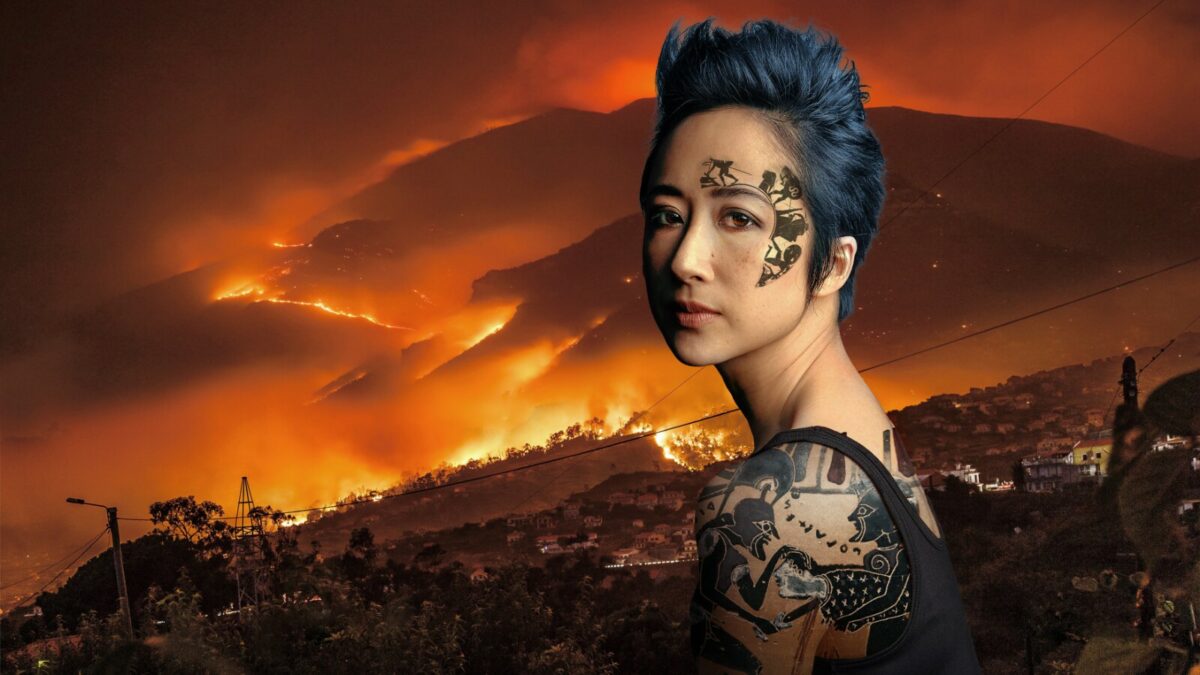 Jin Maley stars as Cassandra in “Cassandra, an Agony, presented by the Getty Theater Lab and created by Sinking Ship Productions, on April 30 and May 1.

There are several related programs taking place during the run of this exhibition, such as a lecture by artist and filmmaker Shirin Neshat on May 15 and an “Ancient History of Persian Wine” on June 11 and 12. Also of note, the Getty Theater Lab is presenting “Cassandra, an Agony,” created by the New York-based Sinking Ship Productions, on Saturday, April 30, at 1 and 4 p.m., and Sunday, May 1, at 2 p.m. Tickets, $7. It may not be suitable for the little ones, so leave the tots at daycare.