Pre- and post-election emotions in “The Faces Within” 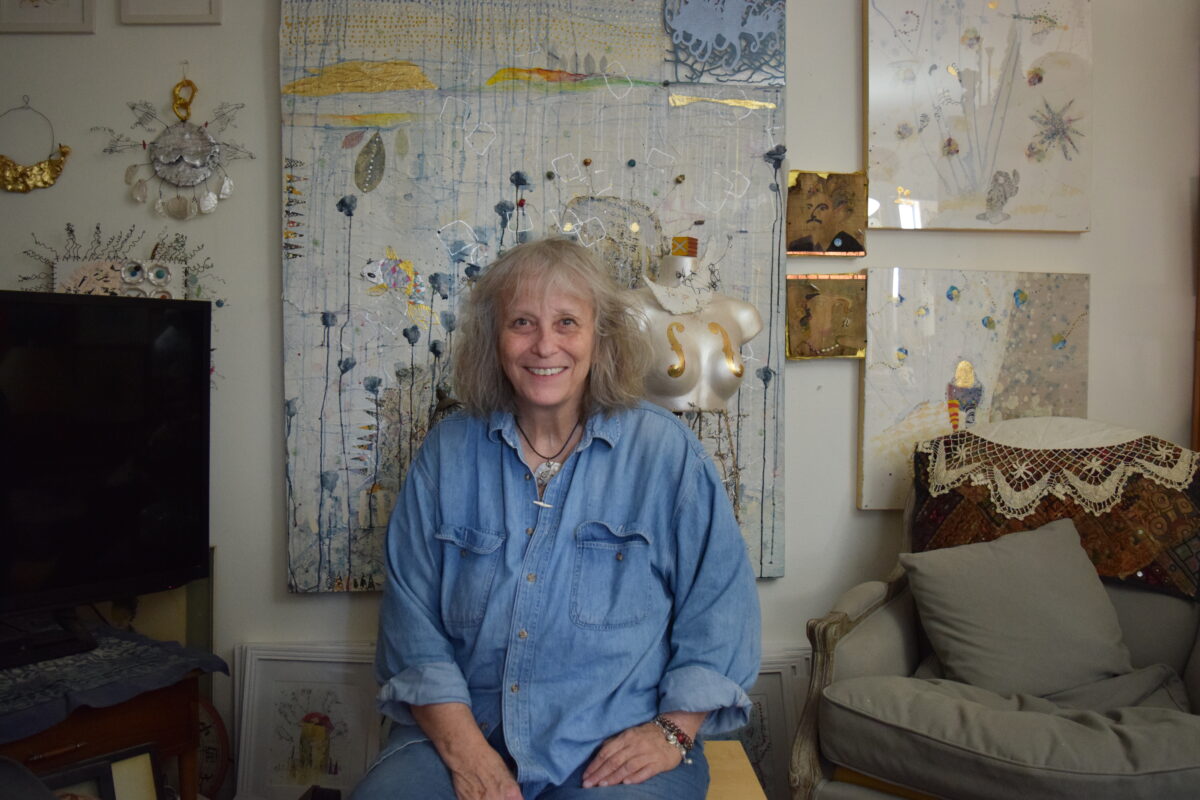 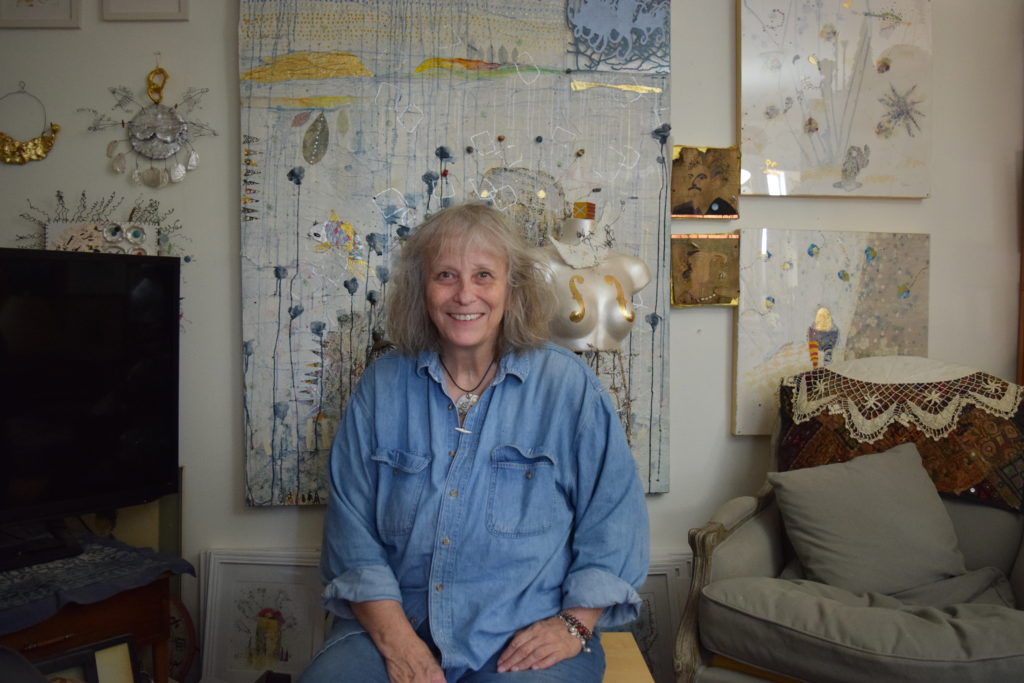 The Winter of Our Discontent

Is America under siege from within? Many artists appear to think so

No matter who one voted for on Nov. 8, most Americans would likely now agree that the first days of Donald J. Trump’s presidency have been the most contentious, if not the most divisive, in recent memory. More so, even, than when George W. Bush snatched victory from Al Gore in 2000.

While all of this is relevant on the national stage, it’s also playing out locally with “Dear President,” the ongoing group show presented by South Bay Contemporary that not only focuses “on issues that our country faces,” but articulates “who we are, where we come from, what we stand for, and what we are against.”

Adjoining “Dear President,” and assembled in a smaller and separate room, is a second show, curated by Karrie Ross, entitled “The Faces Within.” There are 14 artists, each of whom was entrusted with a slice of canvas 15” by 30” and asked to create either the left or right side of a face that would then be paired with an opposite half done by another artist. The result is seven large paintings, 30” by 30”, comprised of two separate half-faces. Got it? What the artists were asked to represent was their emotional or physical state during the 2016 election. They were also asked to prepare a brief artist statement, many of which reveal a deep concern for where a Trump presidency could be taking us. Excerpts from several of them appear below. 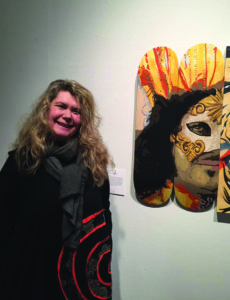 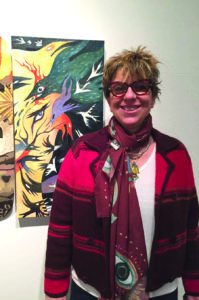 Prelude to a gallery show

Karrie Ross has become fairly prominent in the local art scene, as an artist, a curator, but also for her anthologies, these being a series of books about artists with the general title of “Our Changing World: Through the Eyes of Artists.” These serve as chronicles or documents about what regional artists are thinking and exploring in their work. There are currently eight books available.

Ross is a native Californian, born in Lynwood and raised primarily in the San Fernando Valley. Her parents were talented, her father being an inventor and carpenter, her mother a florist: “She was extremely creative,” Ross says; “she taught me asymetrical appreciation. So, most anything I do, there’s very little symmetry in it, except in my graphic design.”

After her first husband returned from Vietnam, Ross lived in Tacoma, Washington, came back to Los Angeles, spent three years in Vail, Colorado, had a son, a second marriage, and early last year bought a house in Gardena after a quarter century living in Mar Vista. 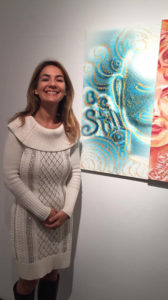 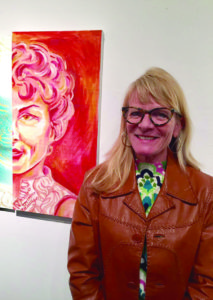 “I spent 40 years doing marketing and advertising in some of the larger graphic design studios and corporations in Los Angeles,” she points out. “I’ve done everything from Yellow Pages to annual reports.”

For the past 15 years, Ross has been engaged in book design for self-publishing authors. And not only is she herself a published author, but she’s also a certified life coach.

Although she did not attend art school or receive formal training, Ross has a distinctive style when it comes to her own creations. Years ago, to supplement her income and to help put her son through college, she took her little white tent to various “art in the park” shows in such places as Beverly Hills, Brentwood, Malibu, La Jolla and San Diego. This brought her to the attention of a company for which she produced art for reproduction, and financially it helped her for about ten years. 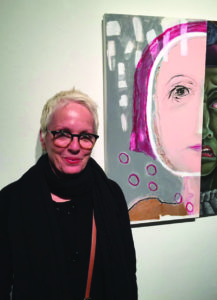 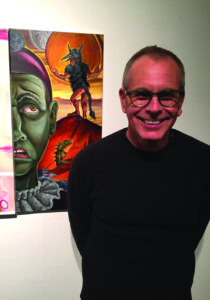 From 2008 to 2011, Ross was connected to a membership art gallery, which proved to be an education in itself. That led her, she says, “to take a look at what everybody was doing from a standpoint of either theme or style or focus. So my curating started there, as well as my understanding a little bit more about the art world.”

This also resulted in the first of her artist books, published in 2013. The theme of that book was “What Are You Saving From Extinction?”

For herself, she says, “I’m saving my internal play. For another person, they’re saving the awareness of the drought. One (person) painted an old car with rust. That old car is going to go away, and so you’d like to think that this painting would have a longer life someplace.” 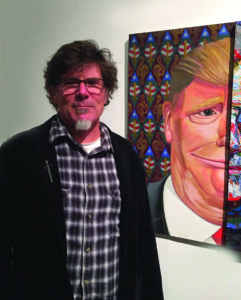 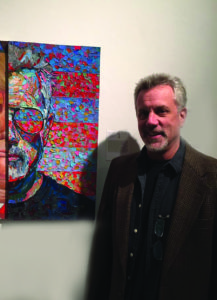 To coincide with the book’s publication, which featured 36 artists, Ross rented a space, a pop-up gallery, and curated an exhibition.

One thing led to another, and in May of last year she sat down with Peggy Zask and said she’d like to curate a show for South Bay Contemporary should the opportunity arise.

“I don’t watch the news,” Ross says, “but I was getting very upset, and so emotionally I wanted to be able to express this. And I was feeling that I wasn’t alone. It’s not so much political, although the political is the antagonist.” 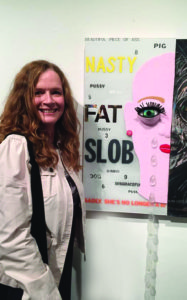 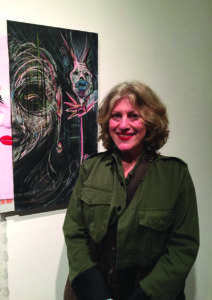 Like the rest of us, Ross watched the debates between candidates Clinton and Trump. “Isn’t anybody else seeing this?” she asked herself. “This is the second debate and he’s still not being addressed in the way he needs to be addressed to stop this behavior.”

As might be expected of a life coach, she looked at the issues the Republicans and the Democrats were presuming to discuss for the benefit of the American electorate, and she tried to see all viewpoints.

“I had come up with here’s one side and here’s the other side, the angel, the devil, the right, the wrong, the good, the bad, whatever. You can keep going into that and internalizing it where and how and why it comes.” And so this led Ross to her concept of the half-faces, which Peggy Zask agreed to exhibit in conjunction with “Dear President.” That’s how “The Faces Within” got underway.

“I really wanted the show to have a dynamic of artistic focus,” Ross says. “And not one of (the artists) has the same style.” Her directions were simple, merely to explain where the eyes, the nose, the mouth, the chin, and the top of the head had to go, “so when I put it (the two halves) together it looked like a face.”

Rather interestingly, the artists were not told who they’d be partnered with. They were not even told who else was contributing to the show. They only found out at the opening. The reason for this “secrecy” was because Ross didn’t want any of these artists to be inspired or influenced by other artists, but to simply delve within to manifest their own inner feeling. 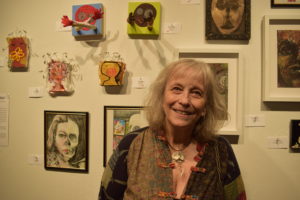 Karrie Ross at the opening for “Dear President” and “The Faces Within.” Photo

Zask was impressed with how “The Faces Within” developed:

“As the half-faces were delivered to the gallery,” she says, “Karrie Ross paired them to [the best of] her artistic capabilities. After they were installed she observed how each face had a dominant and a passive side. This can be perceived as a metaphor; just as two sides of a coin make a single coin, the dominant populist candidate (Trump) got all of the media attention and the passive candidate (Sanders) almost none.

“As is often the case, the dominant figure (the one who makes the most noise) won, and now it’s up to all the people to rise up and save our democracy in a powerful and peaceful manner. 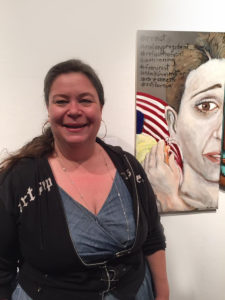 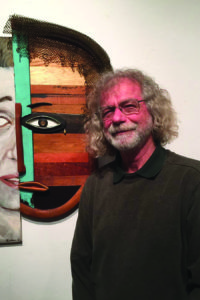 It should be noted that the show was not conceived as an anti-Trump show or campaign or protest. Not surprisingly that came about courtesy of the man himself. Now let’s leaf through the artists’ statements that underline what the majority of them were thinking.

I’d like to foreword this section with a passage from “Imperium,” by the late Ryszard Kapuściński. Written in 1993, it’s no less relevant now:

These are a few yet telling excerpts, written by some of the artists to accompany their work in “The Faces Within.” They also date to before the inauguration on January 20, after which events in this country went into hyperdrive.

Vicki Barkley: “We elected a puppet, a grifter, a predator, into our most powerful office. Sixteen years ago, I believed we had done our worst. Now we see we have unlimited capacity to make mistakes, act on our basest nature, and burn down our own house rather than face history and ourselves.”

Randi Matushevitz: “My reaction to this election circulates through a variety of emotions: shock, disbelief, fear. I am avoiding hopelessness.” 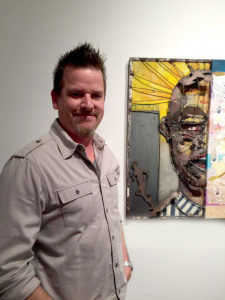 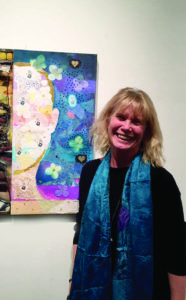 Sarah Stone: “I saw an image of birds violently swarming in and out of my head, representing countless headlines, rumors, opinions, and the daily informed and uninformed media predictions.”

Steve Shriver: “My piece is about the clown we have hired to lead this country for the next four years. His facial expressions sum up my reaction to the election.”

Nancy Larrew, referring to the title of her work, “No One Will Believe You,” with regard to the “inner voice” that often prevents us from speaking up after being personally assaulted: “This election process has amplified that voice by allowing a self-proclaimed celebrity, pussy-grabbing misogynist’s behavior to be normalized into ‘locker (room) talk” while allowing its implications to be overlooked under the pretense of making America great again.”

Some of the artists submitted follow-up comments this week: Randi Matushevitz: “America is about Freedom. Let’s be forceful by not turning a blind eye.” And Malka Nediva: “I can say that I am only getting more and more worried, and I think it is scary what’s going on. Really scary!”

We should wish our government well, of course, but to what point? With great power comes great responsibility, and that means prudence and clear-thinking. To date, we’ve seen very little of this. Will the Republicans in our nation’s capitol speak up and speak out, or is party loyalty more important to them than loyalty to their country?

The Faces Within and Dear President are open this evening from 6 to 9 p.m. during the First Thursday Art Walk at South Bay Contemporary at the Loft, 401 S. Mesa St., third floor, San Pedro. An artists’ talk is scheduled for Sunday, Feb. 19, from 3 to 5 p.m., the day both shows close. (310) 429-0973 or go to southbaycontemporary.com. ER