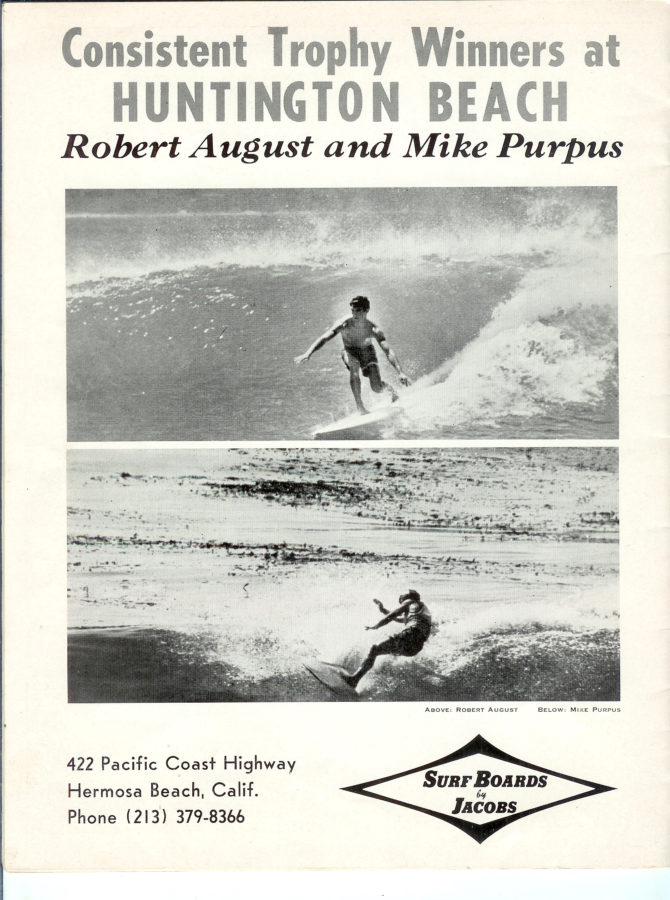 Mike Purpus and Robert August were both on the prestigious Jacobs Surf Team.

In the early 1960s, surf movie posters were hung in the windows of all the hangouts. Hermosa Beach’s Foster’s Freeze, Winchell’s Donuts, (both long gone) and Mickey’s Deli (still kicking) and Stan’s Liquor Store in Manhattan Beach (also long gone) were just a few of the establishments with posters in the window. I was a 12-year-old surf-stoked kid who had to have latest surf movie poster. I covered my bedroom wall with them. My friends and I were surfing’s version of the “Little Rascals,” all caught up in surfing together and attending surf movie premieres.

Surf films were shown in school auditoriums, working their way up the coast from San Diego to Santa Cruz. Pier Avenue Junior High School Auditorium, now the Hermosa Beach Playhouse, was the surf movie spot for the South Bay. Out in front, there was invariably a line of bushy-blond boys —  dressed in Levi’s, Pendleton shirts and huarache sandals — that went past the police station at the bottom of the hill. The only female presence were the girls holding hands with their boyfriends, who were booed by the hormonally-changing audience members for bringing them. Everybody carried bags of sunflower seeds and penny licorice. Surf movies cost $1.50 to $2.00, which was expensive compared to 50 cents for a theater movie. We didn’t care. It wasn’t a movie. It was an adventure that took us to faraway, to the perfect waves we dreamed about surfing one day.

Bruce Brown’s first surf movie, my first surf movie experience, was 1958’s “Slippery When Wet.” It was the perfect escape to Hawaii, with all my surfing idols, including Dewey Weber, Donald Takayama, Kemp Aaberg, and Hermosa Beach local Freddie Phaler. The movie was only half the entertainment. In the lobby, Velzy, Jacobs, Bing and Greg Noll displayed their latest surfboards. The soundtrack played as Brown sat on the side of the stage narrating. His style was perfect. He had a Rod Serling-like pitch with a Johnny Carson sense of humor.

The surfing sequences were broken up with corny skits. In one particular scene, a group of surfers wakes up to flat waves. The surfers run down to the store for a big box of Surf Laundry Detergent. They pour the box in the ocean and instantly start riding 10-foot’ waves. All the hardcore surfers loved “Slippery When Wet” and couldn’t wait for Bruce’s next effort. 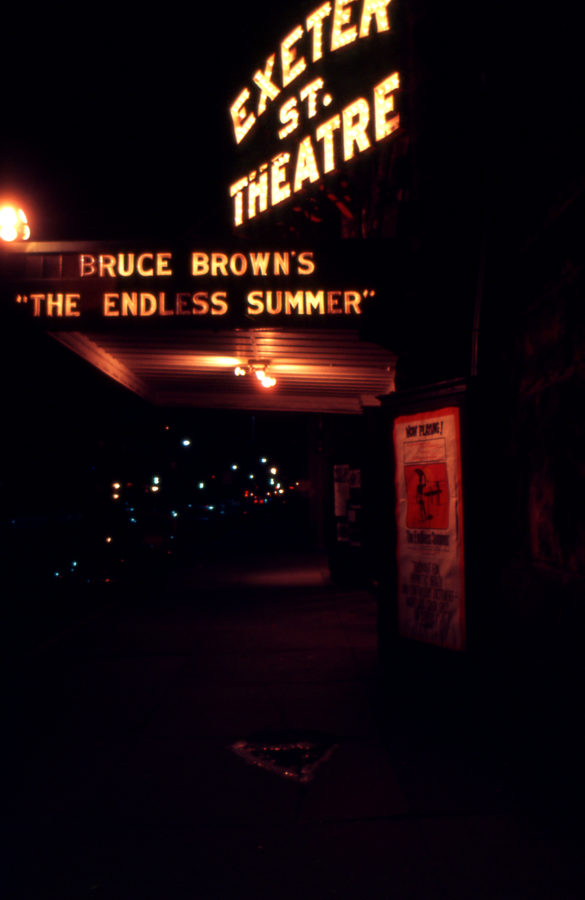 With “The Endless Summer,” Brown made the ultimate surfing documentary, gripping middle-class America with their 9-to-5 jobs to support the wife and 2.5 kids, showing them what they were missing. While 1959’s “Gidget” turned surfing from a fad to sport, “The Endless Summer” got everyone stoked to surf around the world.

I was a Mira Costa sophomore when I first went to see “The Endless Summer.” There were only four showings, 7 p.m. and 9 p.m. on Friday and Saturday. The line in front of the Pier Avenue auditorium began where Becker Surf is nowadays. The place was packed and loud.  “The Endless Summer” changed our young surfing minds, teaching us that Hawaii was not the only surf playground.  Almost every country had good waves, and Nirvana was waiting for us to get there. We were blown away by San Diego’s Mike Hynson’s James Dean persona and Robert August’s silky smooth goofy-foot surf style. (August was a fellow Jacobs Surf team rider, a Jacobs Surfboards shaper, and worked the Jacobs sales floor at the shop in Hermosa.) 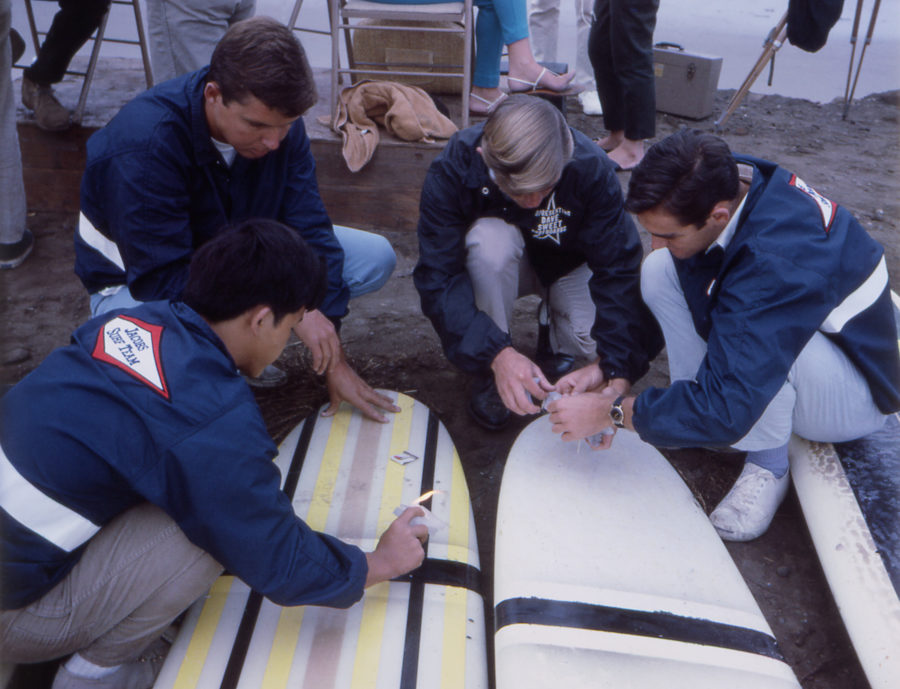 A gathering of the Jacobs’ Surf Team. photo courtesy of Bruce Brown Films

We had to see it again. We begged our dads to pile us in the family station wagons to showings at the Santa Monica Civic Auditorium. When the Civic sold out all week, the major studios took notice. To prove the marketability of “The Endless Summer,” Brown agreed to a screen test at a city as far as you can get from the ocean: Wichita, Kansas. Brown premiered his movie during a blizzard, 2 degrees below zero. It was a smash hit, selling out two weeks straight.

I never personally got to know Brown, but I went on several trips with the stars of “Endless Summer.” Every summer Hap Jacobs sent August and me up and down the Gulf and East coasts, making personal appearances at all the surf shops. Every winter Mike Hynson would go with me and the rest of Windansea Surf Club to stay at Hawaii’s Waianae Baptist Camp and surf in the Makaha International Surfing Championships. I would constantly drag “Endless Summer” stories out of them.

One particular story that comes to mind was told to me by August. During the South Africa portion, Hynson and August toured with “Terence of Africa,” a big-game hunter who was certifiably nuts, always putting their lives in danger. August said that one night while he and Hynson were sleeping in the back of the panel wagon they were traveling in, Terence stopped by the side of the road, caught a cobra and threw it in the back of the wagon between them. The duo were woken up by the hissing of the cobra, and quickly jumped out of the wagon onto the side of road. 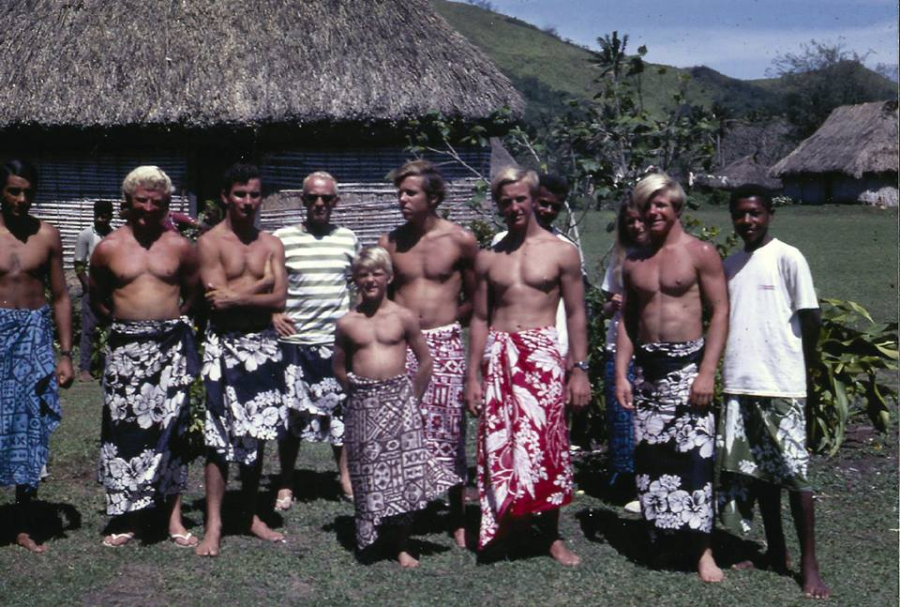 A chiseled Mike Purpus 2nd from left with the Windanaea Surf Club in Tahiti.

“The Endless Summer” inspired countless other surf films. 20th Century Fox hired Eric and Lowell Blum to take me and a few other top Windansea Surf Club members around the world with the hopes of a big-money sequel. The film was called “The Fantastic Plastic Machine.” In Tahiti, I was blown away by how good the waves were. We surfed a perfect wave outside of ”El Stumpo” a novelty wave Hynson and August surfed. Right next to the wave they called “Ins and Outs” was a wave that resembled Trestles.

In  Australia, I went to a hot party with the girl in the tiny bikini that Hynson darted off the beach with during his and August’s travels to Australia. (Contrary to the movie, she had a crush on August.) Our tour took us to New Zealand’s famous point break Raglan, where we scored a perfect left.

In the 70s, I finally made it to South Africa. Of course, we had to surf South Africa’s Cape St. Francis. The sand dunes that August and Hynson slid down before surfing the perfect wave are all a part of Brown’s storytelling magic. Hynson told me years prior that they camped out a block from the beach; the dunes are from another location. But combined with his narration, Brown’s liberties heighten the epicness of that perfect wave — the feeling of the search that’s in all of us. What saddens me was what became of Cape St. Francis. A housing development ruined the point break. Ironically, it was called “The Endless Summer Community.”

While Cape St. Francis was the perfect wave of the ‘60s, we found the perfect wave of the ‘70s in Jeffrey’s Bay just north. Jeffrey’s Bay, or “J-Bay,” was Cape St. Francis on steroids. The right-hand pointbreak fit our ‘70s style of shortboard “pocket rockets” and high-performance surfing. In 1977, I surfed it for a week, landing the cover of Surfing Magazine.

And even then, more than ten years after, surfers still talked about when Brown,  August, and Mike Hynson came there to make “The Endless Summer.” ER