Advertisement
Added on August 5, 2020  Bondo Wyszpolski  A Girl Missing , A White White Day , Shanghai Triad , You Never Had It: An Evening with Bukowski 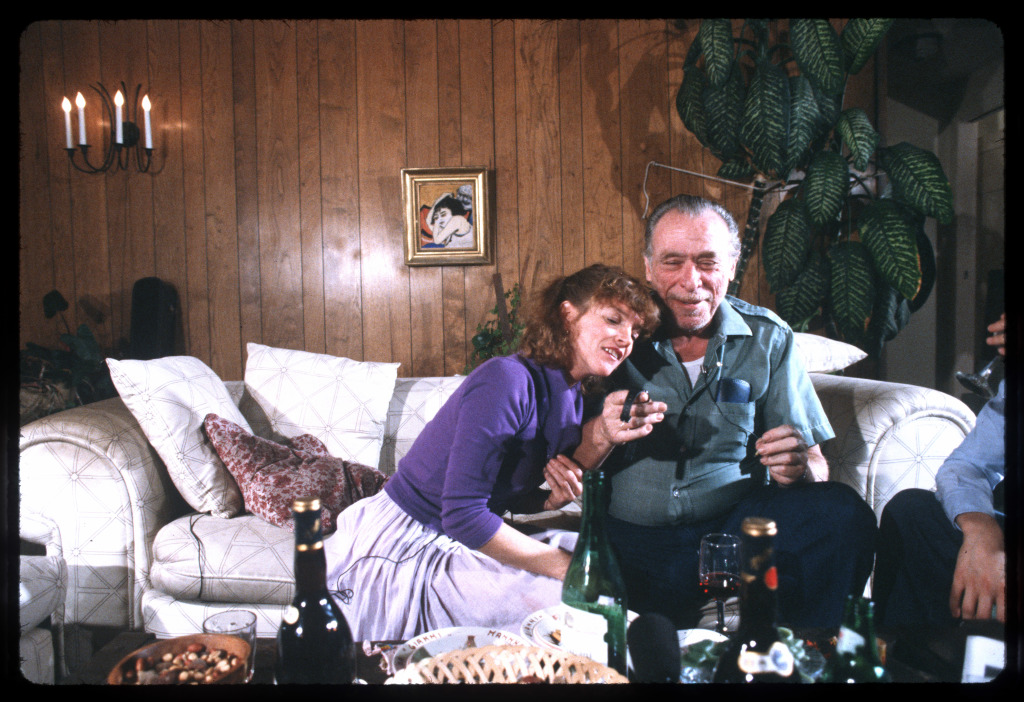 Charles Bukowski with Linda Lee. From the film “You Never Had It: An Evening with Bukowski”

Let’s dim the lights and screen a movie

Film quartet: “A White, White Day”; “A Girl Missing”; “Shanghai Triad”; and “You Never Had It: An Evening with Bukowski”

The movie-going experience at our local theaters may have to wait, but recent or re-digitized arthouse films are available on DVD or through virtual cinema. The first three of these pictures, released by Film Movement, and the fourth, from Kino Marquee, are strong reminders of how movies can stimulate and engage.

“A White, White Day” is Iceland’s official Oscar submission, directed by Hlynur Pálmason, but I might suggest that the viewer first watch the DVD’s “bonus feature,” a 10-minute, silent black and white cinematic tone poem titled “Seven Boats.” It’ll convey something of the director’s sensibility. It’s just one slow panoramic shot and, referencing the title, the synopsis gets straight to the point: “While in a desperate fight for his life, a man stranded alone on the sea is surrounded by seven boats.”

In Icelandic, with English subtitles, “A White, White Day” is set in a remote coastal town and focuses on middle-aged Ingimundur (Ingvar Sigurdsson), whose wife died two years earlier when her car went through a guardrail and down a steep embankment. This is actually the long opening shot of the film, so we’re giving nothing away. Burdened by the tragedy, Ingimundur still sees a therapist.

When we meet up with him he’s about to find “evidence” that his late wife was having an extramarital affair and, the town being small, he already knows her lover and how to find him.

An American mainstream film would likely spell out the details, in case we’d run up to the concession stand for another bag of popcorn, but Ingimundur represses his anger until… well, let’s just say that there are volcanic repercussions. And then the heretofore slow pace is off to the races.

“A White, White Day” may be classified as a revenge thriller, but it’s also a thinking person’s film, spare and concise, with a notable performance not only by its lead actor but also by Ida Mekkín Hlynsdóttir as Salka, Ingimundur’s 8-year-old granddaughter. 109 minutes. Not rated, but probably an [R]. Street date: August 11. DVD/Digital: $24.95. 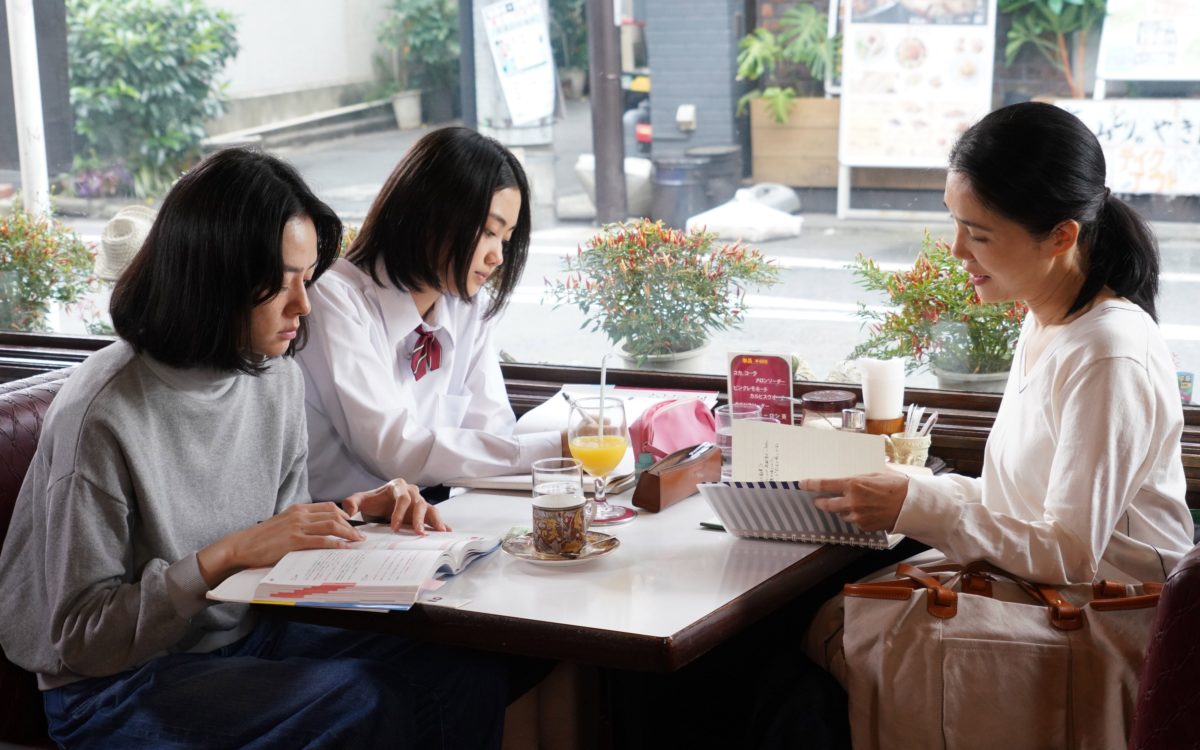 “A Girl Missing,” with (l-r) Mikako Ichikawa as Motoko, Miyu Ogawa as Saki, and Mariko Tsutsui as Ichiko

“A Girl Missing,” written and directed by Koji Fukada (in Japanese with English subtitles). You have to be on your toes for this one, because there are twin timelines, a now and a later, but the director made the decision to interweave them. And so the first scene, with Risa Uchida (Mariko Tsutsui) at a hair salon, where she’s specifically asked for a young man named Kazumichi (Sosuke Ikematsu), chronologically would fall at a much later date.

Risa isn’t the woman’s real name; it’s Ichiko, and she’s a pleasant, almost middle-aged private home nurse who’d been attending the matriarch of a certain family for several years. There are two granddaughters, Motoko (Mikako Ichikawa) and Saki (Miyu Ogawa). I’m guessing these girls are, respectively, about 20 and 15 years old. Ichiko also tutors both of them in a local cafe or diner. One day Ichiko’s nephew, Tatsuo, stops by the cafe to drop off some books. He’s a taciturn youth, the furthest thing from an extrovert, and he soon leaves after a prolonged glance at Saki. A few hours later, Saki is reported missing, only to resurface, safely, a week later. An arrest is soon made, and it’s the nephew who abducted her.

We never find out what transpired between Tatsuo and Saki, because both of them remain tight-lipped. He doesn’t seem to have tortured her, but then again he doesn’t seem to have wined and dined her for a week in Paris, either. However, they aren’t the story, only the catalyst for what happens to Ichiko.

In a fit of jealousy, because she has a crush on the older woman, Motoko betrays Ichiko and ruins her life—she loses her job and her fiancé leaves her high and dry. So what do we have left? Let’s not forget the hairdresser: what’s his connection to all this? “A Girl Missing” is a revenge story, but one that’s quirkily told.

Not a great film, a little maddening in that it’s a bit like a jigsaw puzzle where you’re never sure if you’ve got the pieces just right. But worth mulling over. It’s now in virtual theaters and can be rented through Laemmle Theatres. 111 minutes; not rated, probably an [R]. 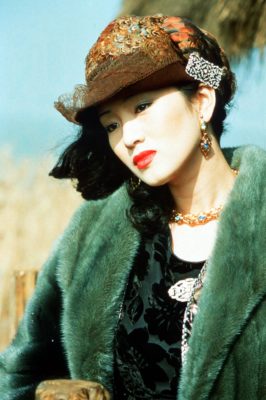 Chinese director Zhang Yimou hardly needs an introduction—his films include “Raise the Red Lantern,” House of Flying Daggers,” “Coming Home,” and “Shadow.” Although “Shanghai Triad” was released in 1995, it’s been digitally restored and, seeing it today, it looks as stylized and lavish as ever.

The setting is Shanghai in the 1930s with Li Baotian as the underworld crime boss, Gong Li as his mistress and nightclub performer Xiao Jinhao, known as Bijou, and Wang Xiaoxiao as the 14-year-old country bumpkin Shuisheng, who is enlisted by his uncle to become Bijou’s boy Friday. And, speaking of Friday, the action takes place over the span of a single week.

Bijou isn’t very likeable, and we could describe her as mean, heartless, and pampered. There’s a sea change of sorts late in the story when it shifts from Shanghai proper to a small island just off the coast. The soundtrack, released when the film was first in theaters, is sumptuous but fairly repetitious as well: The theme song may get stuck in one’s ear and refuse to come out.

While Bijou is elegant, Shuisheng is clumsy, and I think there are moments when the viewer may wish him out of the film. But it’s through his comparatively innocent eyes that we see this cruel and ruthless world where various factions will do anything to gain and retain power, and where everyone is disposable. “Shanghai Triad” is as lush and seductive as it is brutal, and it holds up quite well 25 years later. In Mandarin, with English subtitles. 108 minutes and rated [R]. Out this week on Blu-ray/DVD/Digital: $29.95/$19.95. 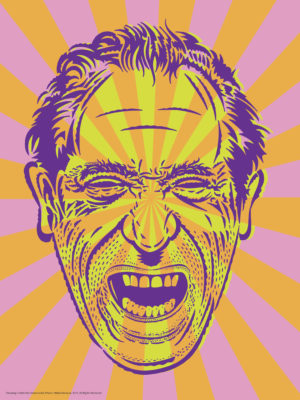 On August 16, Charles Bukowski would have turned 100, which may be why Kino Marquee (with Slamdance) is releasing “You Never Had It: An Evening with Charles Bukowski.” The film, directed by Matteo Borgardt, clocks in at just 54 minutes. Back in 1981, the Italian journalist Silvia Bizio arrived with her camera crew at the San Pedro home that Hank (as he was known) shared with his girlfriend Linda Lee, and what began at 4 p.m. didn’t wind down until one in the morning.* It was an evening fueled by smokes and so many bottles of wine that what Julio Cortázar wrote in “Cronopios and Famas” would surely have applied: “We drank so much chianti that my younger sister ended up having to clear the table with a rake.”

Throughout all that haze, purple or otherwise, Bizio pumped Bukowski with questions which, at least with what we have here, were thoughtfully answered. Hank’s quotable throughout, and overall the work is wryly amusing. If the film itself is grainy and the color rather washed out, that’s because it was originally shot on U-matic videotapes. After sitting in boxes for a couple of decades it was digitized in 2016 with some new footage spliced in. The result is something closer to cinéma vérité than one of those polished docs you can find on the Nature Channel. On the other hand, the camera “technique,” a word we’ll use lightly, mirrors the evening itself.

“You Never Had It: An Evening with Bukowski,” directed by Matteo Borgardt

Bukowski says he didn’t start writing until he left his job at the post office at age 50. He mentions a few writers he’s admired, John Fante, D.H. Lawrence, and Dostoevsky among them, but generally speaking, “Writers are very despicable people. Plumbers are better, used car salesmen are better. They’re all more human than writers.” As for acceptance by the reading public, “You should always be a little ahead of your time. When your critics agree with you, when your readers agree with you, you’re not doing a good job.”

These are off-the-cuff quips or opinions we can take or leave, but Bukowski was a singular figure in the literary history of Los Angeles. As for the film’s title, it was taken from a moment towards the end where Hank is commenting on the sorry state of the human race. “Humanity, you never had it.” That doesn’t apply to Bukowski since he had a way with words, a poet’s touch, and a strong work ethic behind the drunken old man façade. You don’t write 65 books just sitting back with a bottle of wine. Opens Friday in virtual cinemas, in Los Angeles through Laemmle Theatres.

*After writing this piece I spoke at length with Linda Bukowski, who conveyed her dissatisfaction with how the interview was conducted, e.g., trying to get Hank to expound on what might be considered more sensational topics, with sex high on that list. Hank definitely had a public image, but Linda emphasizes that he’d evolved well beyond that. It’s common knowledge that she took good care of her husband and in her own way was protective of him. But I still think, as I told her, that Hank carries himself well in this interview. And remember, it’s just one evening, not a panoramic, well-rounded portrait. A glimpse, but a compelling glimpse. ER