The Infinite Series of the Sea: Raymond Pettibon, punk’s most celebrated artist, creates spellbinding works of surfers and waves 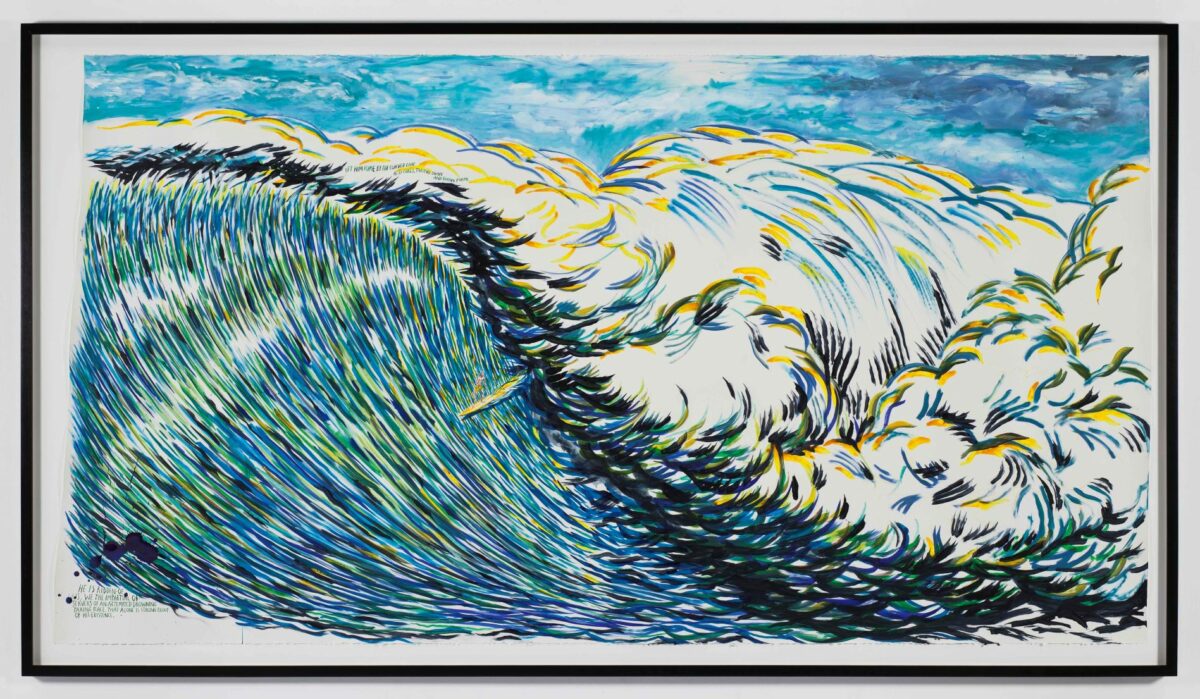 In surf speak, a “line” is the path a surfer chooses to take on a wave. The decision is typically a strategic one. If a surfer knows the wave they are riding will soon move into deeper water, and become weaker as a result, they might position themselves higher on the face, so as to ride downward with gravity through the section, then cut back toward the curl to avoid getting too far out in front and losing momentum. But the choice of line is also aesthetic. Even the notoriously inane announcers for professional surfing contests refer to the lines surfers “draw.” If it seems wrong to call surfing an art, thinking of it as just a sport isn’t much better.

Lines both physical and conceptual recur throughout the surf art of Raymond Pettibon, which has been collected in a dazzling new book from the publishing imprint of the David Zwirner Gallery. “Point Break: Raymond Pettibon, Surfers and Waves” contains lines taken by surfers, wakes of disturbed white amidst the greens and blues of the wave’s face, but also lines of text that are inserted in each work. And the word “line” appears in these dispatches too frequently, even for an illustrator, to be a coincidence: “The line between sport and spectator;” “To take any other line than the one I carve;” “Let him come by the curved line as it curls, taking shape and giving form.” Viewed together, the works suggest an artist attuned to the wonder of the sea, and to the character of those who would try to tame it.

Pettibon, who grew up in Hermosa Beach and is the brother of Black Flag founder Greg Ginn, is the artist behind show flyers and album covers for SST Records, the label Ginn founded that became the most important indie of the 1980s. For fans of Southern California punk rock, Pettibon’s work is iconic: nuns and cops, knives and shears, child delinquents and aged perverts, scenes of satanic deviance and cultish delusion that hid humor behind menace.  His work is challenging to pigeonhole but effortless to recognize.

Surfers sometimes appeared in the early stuff—one flyer, for a New Year’s Eve Black Flag show with Redd Kross and Hüsker Dü, depicts a stoic shortboarder with a single-fin longboard gorily piercing his midsection—but after parting with his brother and the label in the mid-’80s, Pettibon began to make surfing scenes a bigger part of his oeuvre, and to ascend in the broader art world. Today, large Pettibon wave canvases fetch over $1 million. 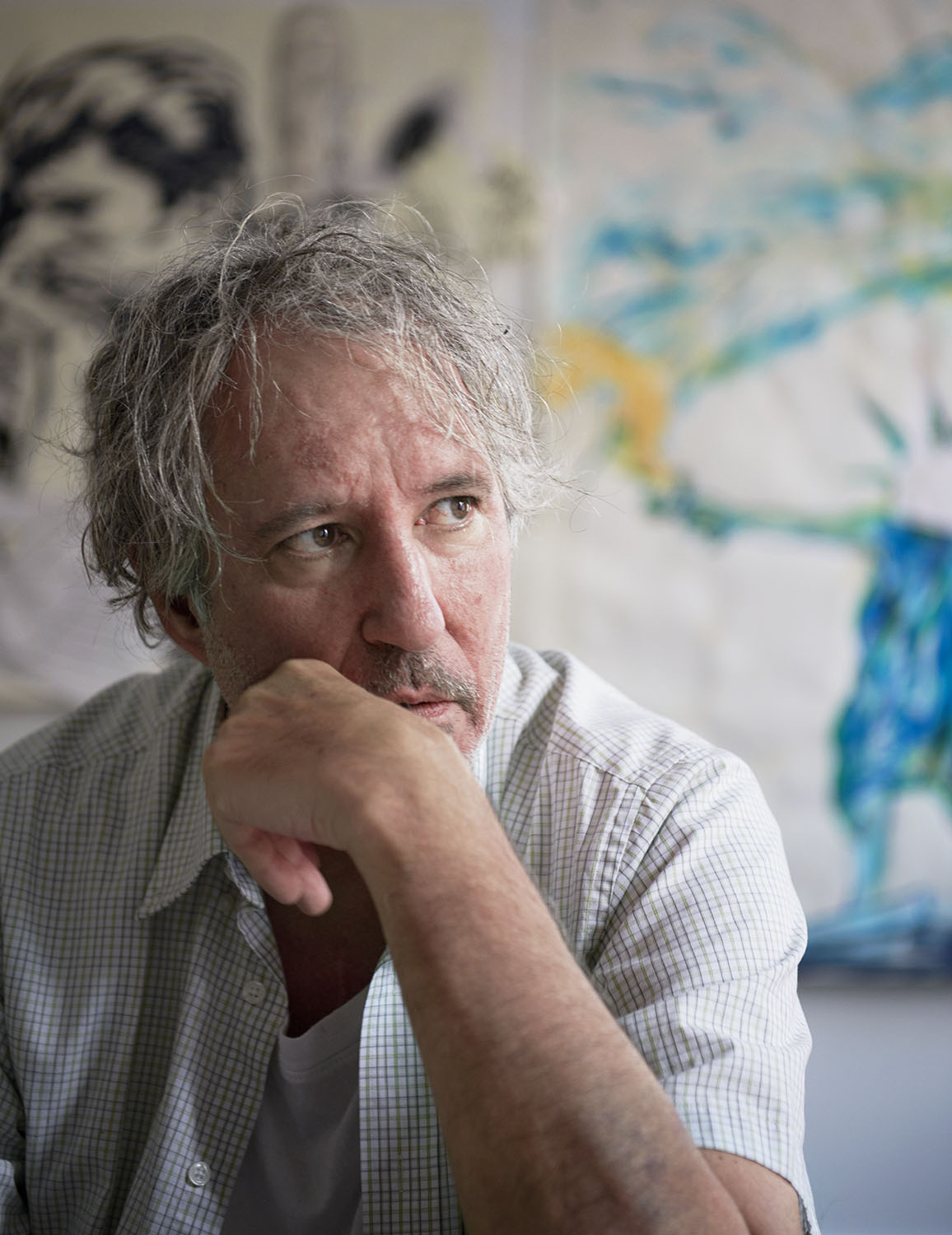 Pettibon, who grew up in Hermosa Beach, has become a star of the contemporary art scene. Photo by Jason Schmidt, courtesy the artist and David Zwirner

One of the best things about “Point Break” is the opportunity it provides to see how Pettibon’s art evolves over time. Early works, mostly ink on paper and small enough to fit on a desk, use negative space amid streaks of black, almost like linocuts, to suggest water being drawn upward along the face of a wave. (The technique lends the ocean an undeniable similarity to the floor painted by the manic youth on the cover of Black Flag’s “Six Pack” EP.) Eventually, the art becomes denser, richer and larger, featuring watercolor and collage, and sometimes stretching over canvases 10 feet wide. Surfers viewing the book will note that early Pettibon features only rights (waves breaking from right to left when viewed from shore), while the more recent drawings include plenty of lefts.

At times, Pettibon seems to be depicting specific surfers or waves. The surfer in the 1987 work “No Title (What is Signified…),” arms in air like someone leaping from a building, is clearly Greg Noll at Waimea Bay—the jailhouse trunks give it away. The wave in “No Title (Big gun pen…),” from 2020, thicker than it is tall and detonating with whitewater that churns like the smoke from a locomotive, is a dead-ringer for the Code Red swell at Teahupoo in Tahiti.

But more often, the waves are placeless, surging into the frame with such bulk that they obscure landmarks and compact the horizon, and the surfers are anonymous, free of ornamentation or so dwarfed by the wave that they can be hard to make out. In this, Pettibon’s work resembles the drawings that surf-obsessed kids make in the margins of their school work.

That is, of course, the ultimate compliment that one can deliver to a wave itself, one reliably repeated whenever a new “perfect wave” is discovered (or, in the case of Kelly Slater’s wave pool, built). The artist Robert Storr has described Pettibon as not a caricaturist but a practitioner of “sensationalized naturalism.” The comment was inspired by some of Pettibon’s more political portraiture, but it holds just as well for the works in “Point Break”: His waves hum with energy and displacement; his oceans move in ways surfers will not only recognize, but fetishize. 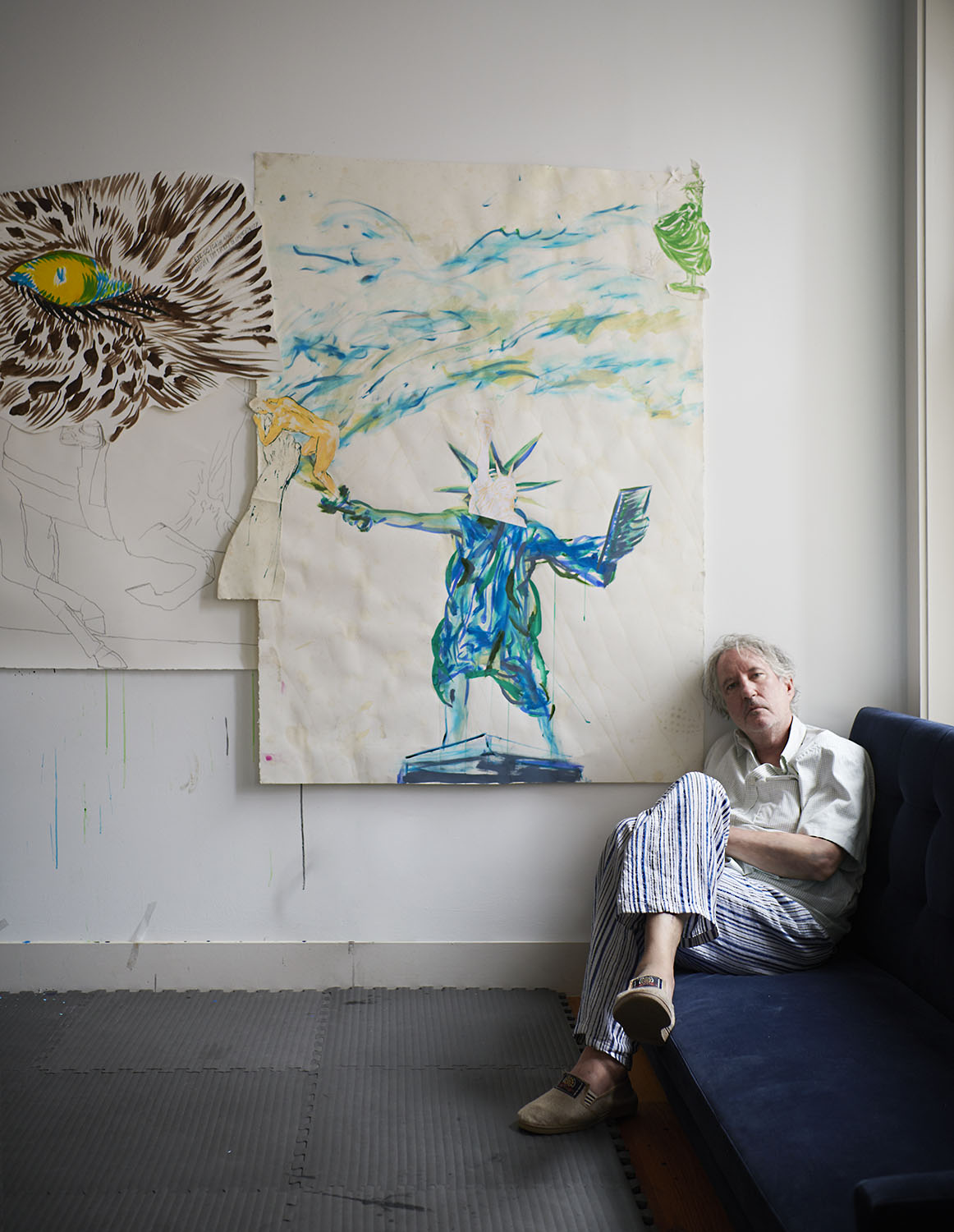 Recent arrivals to punk rock or surfing could be forgiven for thinking that the two have always gone hand in hand. That is in part a legacy of the phenomenal success of another Hermosa Beach band, Pennywise, whose songs were prominently featured in the Taylor Steele surf movies of the early ‘90s. Things were not so clear in punk’s formative years. Redd Kross, the Hawthorne youngsters who regularly played with Black Flag, summed it up in the song “I Hate My School,” from their self-title 1980 EP: “Surfers at my school/Are the biggest pricks.”

In an interview with the surf writer Jamie Brisick included in “Point Break,” Pettibon said that surfing was impossible to escape growing up in Hermosa Beach. (Pettibon was not available to answer questions from the Easy Reader for this story.) But while Pettibon surfed occasionally and often spent time at the beach, he recognized that there is a level of commitment that distinguishes a surfer from someone who surfs.

“There’s a social situation in surfing that, unless you’re born into it, or on the inside, then move on. I’m glad I didn’t succumb to the surfing lifestyle because it’s all encompassing, it’s all day, twenty-four hours, seven days a week,” Pettibon said.

Here Pettibon is getting at what does link surfing and punk: the way obsession can breed hostility to dabblers or “posers.” That Pettibon, who freely admits to not surfing and not being a musician, has operated so successfully in both worlds is owed to his keen observational powers, and a streak of defiance that will provide admission to just about any subculture.

When Pettibon’s brother Greg formed a band, he at first called it Panic!, then abandoned that when he learned another act had already claimed it. As the group kicked around new names, Pettibon came forward with Black Flag and the “bars” logo: four rectangles oriented to resemble a waving flag (or, as is sometimes said, the pistons of an engine).

Like Greg, Pettibon studied economics at UCLA. (He was born Raymond Ginn; “Petit Bon” was a nickname given to him by his father.) After teaching for a short time, Pettibon devoted himself to creating underground zines. The first, “Captive Chains,” came out in November 1978: 68 pages of illustrations laden with sex and violence and comic book-style text, bound with stapes and sold for $1.50 by the publishing arm of SST. (Copies now sell on eBay for hundreds of dollars.) As Jim Ruland notes in his recent book “Corporate Rock Sucks: The Rise and Fall of SST Records,” the label mined the images found in “Chains” and Pettibon’s subsequent publications for many of its flyers and album covers, leaving him free to make art mostly without direction. 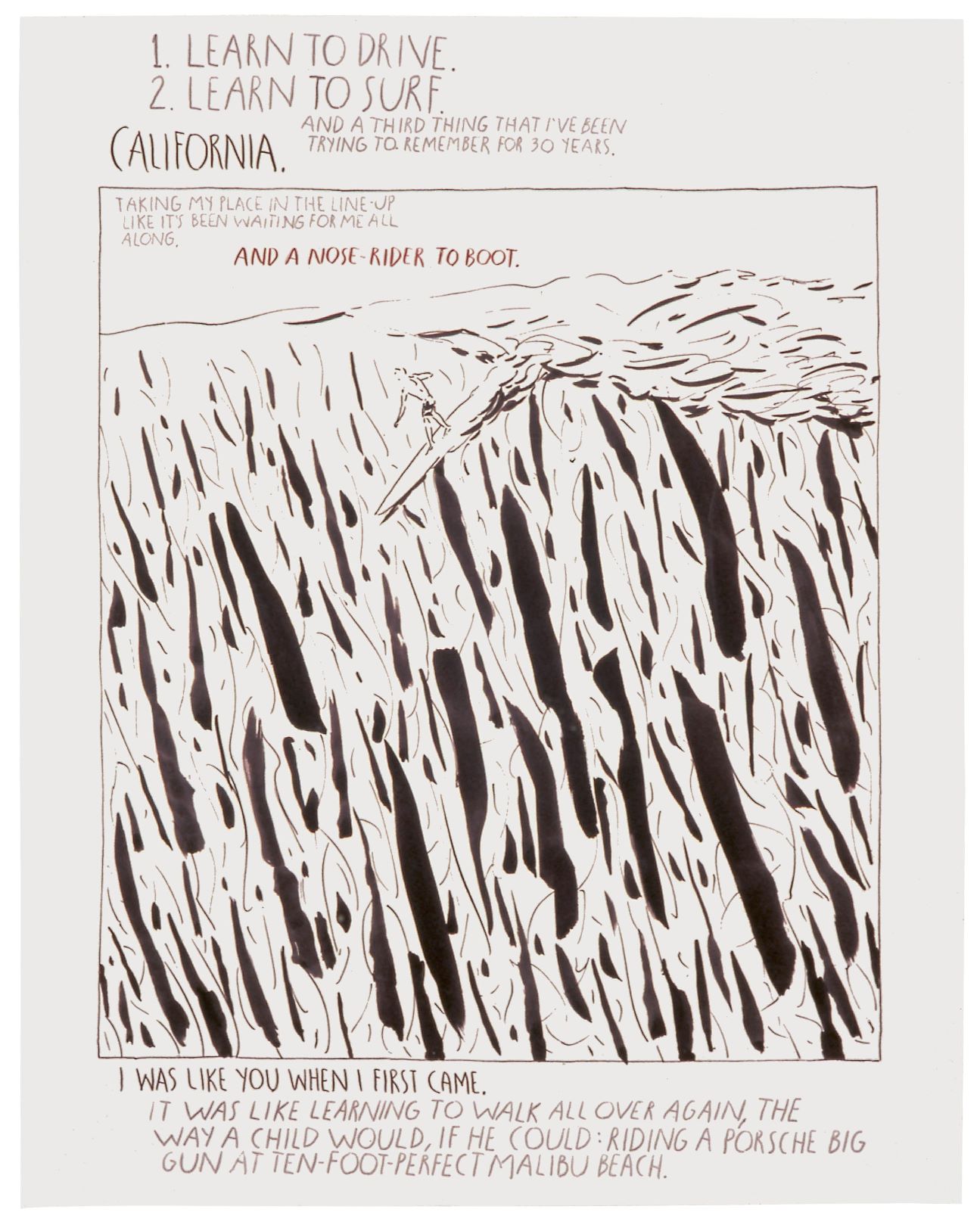 No Title (Learn to Drive…), 1990. Pettibon’s early surf art, mostly in black and white, resembles the album covers and flyers for bands on SST Records. Over the years, his color palette expanded and canvases got bigger. Painting by Raymond Pettibon, courtesy of the artist and David Zwirner.

When Pettibon did respond to a request for art for a specific piece of music, it was on his own terms. In an interview for a 2013 documentary about Pettibon’s art, Henry Rollins, who sang for Black Flag between 1981 and 1986, recalled the time he offered an idea for a sticker promoting the band’s song “My Rules.” Speaking in an exaggerated version of the hyper-masculent growl he is known for, Rollins describes his idea for a detached hand with a pointed middle finger. Pettibon agreed to draw what Rollins asked for, but delivered to the band a literally limp-wristed take on Rollins’s vision of manly defiance. “Even the middle finger is wilting. It’s like salad left out in the afternoon,” Rollins says with a chuckle.

This same sense of among-them-but-not-of-them hangs over Pettibon’s surf art. The lines of text Pettibon inserts are a mix of his own inventions and bits cribbed from his prodigious reading—the philosopher George Santayana (“What Need, O Shipmates, to Sail for Any Port?”), the critic John Ruskin (“The Ringing of Thin Currents Among the Shallows”), the essayist Walter Horatio Pater (“The World on the Morrow of a Great Catastrophe”). They offer poetic intimations of the ecstatic experience surfing can offer, but also seem designed to clash with society’s conception of how surfers themselves talk about waves: of Spicolis who can muster little better than “tubular.” 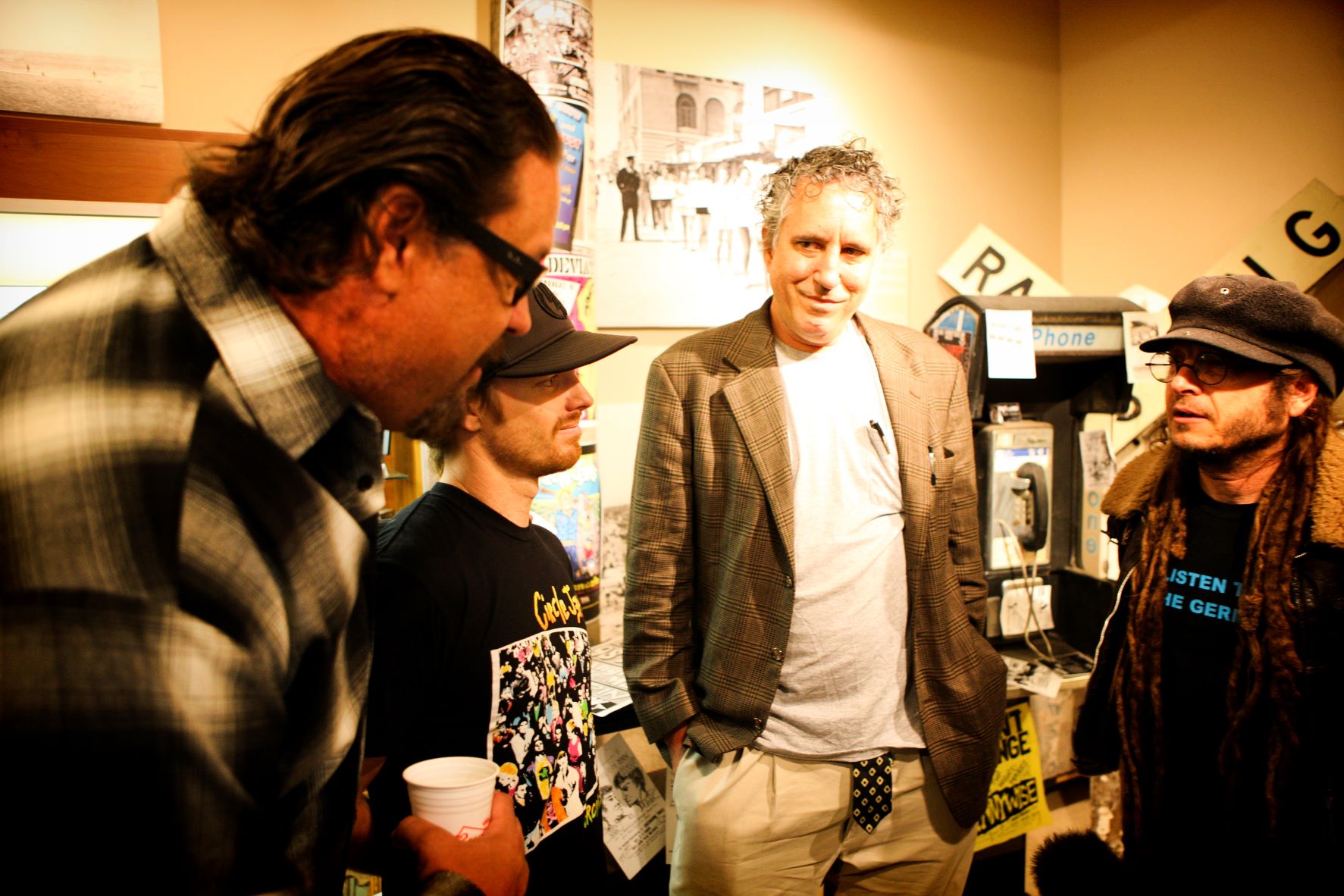 As Peter Schjeldahl, the longtime New Yorker art critic who passed away last month, wrote in a 2017 piece, “How seriously to take it is an uncertainty that haunts all of Pettibon’s art.” A further possibility is that, by combining surfing with high-brow quotations, Pettibon is targeting the pretentiousness of those who think they can defy society through an activity that has been so thoroughly absorbed into mass culture. The art historian Brian Lukacher, in an essay included in “Point Break,” suggests that Pettibon’s work sends up the “illusory freedom and subcultural resistance of the surfing lifestyle.”

Here again surfing and punk run parallel. In its early days the Black Flag logo was the ideal representation of the band’s music because, in the words of Flea, the Red Hot Chili Peppers bassist and an avid Pettibon collector, it communicated “that feeling of danger and this intense commitment to art.” But as with surfing, what was once seen as deviant eventually became omnipresent, even marketable. The Black Flag bars are often given the impossible-to-verify title of most tattooed tattoo of all time.

“Once I looked down and saw [the Black Flag bars] on top of a girl’s foot opposite the logo for Chanel,” Sonic Youth bassist Kim Gordon recalled in a review of a retrospective of Pettibon’s work at the New Museum.

Pettibon, in his interview with Brisick, distinguishes between big-wave surfing and what he calls “changing out of your wetsuit in the parking lot” surfing, which he suggests belongs to “locker-room jock culture.” The distinction doesn’t quite satisfy; macho posturing is if anything more common in big-wave surfing. (“Too much testosterone around here for me,” Lori Petty muses as she excuses herself from Patrick Swayze’s rhapsodizing about surfing a 50-year storm in the 1991 film “Point Break.”)

What Pettibon seems to be getting at, though, is that even in those activities that have met the tide of dominant culture, there is a kind of purity that still exists in intense personal experiences—the lines we choose when no one is watching. As he inscribed in a 2010 wave painting, one of the few in the book in which no surfer is present, “Some things (sea foam, for instance) cannot be drawn at all, only surfed.”