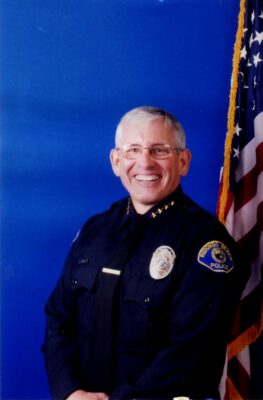 RBPD Chief Joe Leonardi ditched his police car for a bike to catch a suspect on Thursday.

Redondo Beach Police Chief Joe Leonardi, dressed in his suit and tie, rode a rusty beach cruiser to track down a suspect Thursday afternoon, eventully arresting the fleeing man and providing a superhero-like story for the police department to laugh about for years to come.

Leonardi, who usually takes a drive through Redondo Beach during the day to check on problems and complaints in the community, was idling in the Elks Lodge parking lot by Veterans Park after lunch when he saw a group of transients in fighting stance. The chief noticed one of the men fit the description of a suspect who allegedly beat a 20-year-old city maintenance employee with a glass bottle Monday. The employee was almost knocked unconscious and suffered from lacerations on the face from the bottle. The mountain bike the suspect had near him on Thursday also matched the description the employee gave to officers of the one his attacker had in his possession.

On Thursday, Leonardi was intent on finding the suspect, and after coming upon the group about to fight, realized he may have found the guy responsible for the employee’s assault.

“They were kind of dancing around and I thought maybe they were just playing around, but they had serious looks on their faces,” Leonardi said. “They turned and looked at me in the car and the guy on the bike took off.”

Leonardi let the man, identified as Morgan Wayne Walker, 36, get out of his sight, then tracked him by car to Catalina Ave. He continued the pursuit to Topaz and onto Broadway and finally down Knob Hill to the Esplanade.

“Then I lost him,” said Leonardi.

He called for backup and saw the man emerge from an alleyway. Another officer yelled for the suspect to stop and as soon as he saw the police car, he took off again.

“The guy dropped the bike and his backpack and ran down the side of an apartment building,” said Leonardi.

The chief realized he could no longer follow the man by car, so he ditched the vehicle and in a split decision, picked up the bike the suspect had ditched, along with a dropped backpack, lock and wallet, and continued the pursuit.

“The fastest way to go after him was to go on his bike,” said Leonardi. “So I got on the bike and rode after him.”

He continued up the road searching for the man until he came upon another abandoned police car. Officer Steve Sabosky was on the suspect’s trail when he saw the chief biking up the hill in his suit.

“Afterward Sabosky said that when he saw that he just couldn’t process what he was looking at,” said Leonardi. “The first thing that popped into his head was, ‘Why is the chief out exercising during his lunch on a bike, and why is he in a suit?’”

Leonardi said that when he jumped onto the bike, the first thing he thought, because of the black bike, wide handlebars and large black basket on the front of the bike, was that he felt like the Wicked Witch of the West.

“Since then, people have been sending me YouTube videos of her as a joke,” said Leonardi. “There’s a lot of good natured ribbing around the department.”

For Leonardi, the chase was just part of his job.

“It’s kind of a funny thing, the image or the concept of the chief of police riding a bicycle in a suit and tie,” said RBPD Capt. Jeff Hink. “On the other hand, crime fighting starts with the top of the police organization. These days it’s a little unusual to hear about a chief of police getting his hands dirty, but our chief is long known for being aware of crime in the city and proactively tring to address it.”

After Leonardi caught up to the stunned and confused Sabosky, they caught the suspect around Avenue C and arrested him.

“The two of us put handcuffs on him and that was it,” said Leonardi. 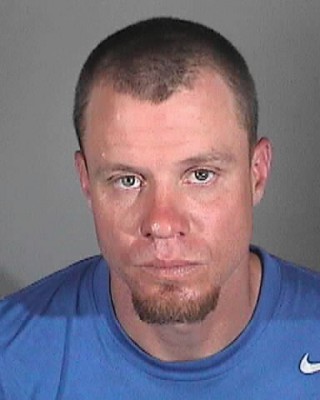 While walking back on the trail he had originally biked a few minutes earlier, Leonardi spotted a gold class ring from Cal Poly San Luis Obispo on the sidewalk that was later traced back to a Tuesday burglary in Hermosa Beach. However, he didn’t see the suspect and isn’t able to prove he dropped the ring.

“For now it’s just a ring where it shouldn’t be,” said Leonardi. “But that’s where he ran so that’s where the suspicion of possession is. The only way to make a case is evidence that would point to him at the burglary, otherwise a guy gets his ring back and that’s it.”

The police are still looking at other suspects regarding the Monday beating. For now, they aren’t positive the suspect who was pursued Thursday was the attacker.

After the chief’s epic chase, Walker is now in custody because of a link to another crime, and the department is buzzing about the chief’s superhero moment.

“In the end, that’s what this is all about… it being funny,” said Leonardi. “It is. It was spur of the moment, and seemed the best thing to do and fastest way to get him and not lose the bike.”