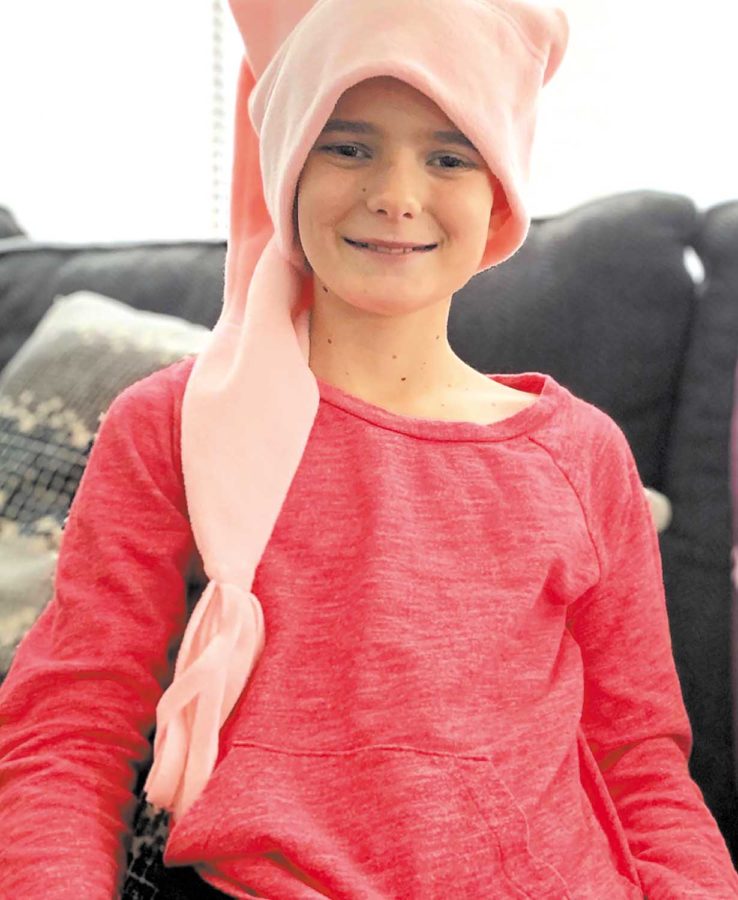 Earlier this month, Redondo Beach Police Captain Jon Naylor received a request from his 11-year-old daughter Cait — she wanted him to shave her head.

Getting home from a shift, he found out that a chunk of her hair had fallen out. Cait was near the end of her first month of chemotherapy to treat an aggressive childhood cancer that had come on rapidly. So she asked her father to help her with doing something he has years of expertise in doing for himself.

“So I did. I shaved her head,” Naylor said. “And I looked down and actually…her head is actually just so beautiful.”

Cait, Naylor insists, has been a strong young woman throughout the process. And the Redondo Beach Police Department has taken that idea and run with it, rallying behind the Naylor family by selling #CAITSTRONG pins and wristbands.

In October, Cait had just wrapped up tryouts and clinics for her club volleyball team, when she started to complain about a bit of pain in her ankle. The pain was getting in the way of her workout and practice sessions. At first, it didn’t seem like a big deal — when Naylor looked at it, he thought she’d just hurt herself without realizing it.

“It wasn’t like a knob or a lump, it just looked puffy, like a swollen ankle…she probably twisted it, no big deal,” Naylor thought. They’ll wrap her up with an Ace bandage, rub a bit of dirt on it, it’ll be fine.

But Cait’s mother insisted they get the ankle checked out. So they did. It was cancer, and more specifically rhabdomyosarcoma, or RMS, a relatively rare cancer that targets skeletal muscles — muscles that pull on tendons to move body parts, like a bicep. RMS most often develops in adolescents, and as the Naylors learned, it’s fast-moving.

November was a whirlwind month of medical scans, biopsies, bone marrow tests and chemotherapy port placements. Then doctors learned that the cancer had spread to Cait’s lungs, moving into Stage Four territory.

“It’s crazy. It went from her ankle hurting in one week to their whole life-changing,” said RBPD Chief Keith Kauffman. “It almost felt like an overreaction, like how do they already know this? But had treatment plans lined up before they were even ready to go.”

Kauffman has been there alongside Naylor throughout the process, as a boss, colleague, and friend. The department as well has drawn around Naylor, his daughter and Children’s Hospital Los Angeles, where Cait is receiving treatment.

Naylor captains the department’s Community Services division, which takes point on many matters that most-closely affect residents, and leads RBPD’s Community Working Group. He’s among RBPD’s most visible faces, second to Kauffman (and the department’s ever-photogenic K-9 officers). This is one of the first times in his 25-year career as a police officer that he’s felt no control over a situation. But the support he and his family have gotten has steadied them.

“We’re really lucky. We have great insurance through the City, and everyone at the Police Department and the City has stepped up and given us so much support,” Naylor said.

On Dec. 19, RBPD announced via social media that it was selling yellow #CAITSTRONG bracelets and pins for $10 at the front counter of the RBPD police station. It took off quickly — police had trouble keeping up with demand for the bands, and trips to the department’s front desk had front-office staff asking for names, addresses and phone numbers to send bracelets along. At one point, Kauffman told his staff to order as many as 1,000 more bands and pins after the initial order sold out. The Chief’s assistants, with other members of the department’s civilian staff, came in on their off-days to help manage the demand.

“That’s a testament to Jon, a testament to our department and our outreach and of course the community’s response,” Kauffman said. “There’s comfort in knowing how much support we have for Jon.”

The wristband and pin sales, Naylor said, will go toward helping Cait feel comfortable during her chemotherapy. The high-dose treatments leave her feeling like she’s been hit with a truck, requiring multi-night hospital stays.

At Naylor’s request, an officer set up a fundraiser through the St. Baldrick’s Foundation, a charity which raises money to fight childhood cancers. Their trademark is highly visible events, where people will come together having collected funds with the promise of getting their heads shaved before a crowd. That fundraiser will take place on Jan. 18, from 10 a.m. to 5 p.m. at the RBPD Annex, 200 N. Pacific Coast Highway.

“We want to send the message that parents need to be aware of this. Only 7 to 8 percent of kids with cancer have RMS,” Naylor said. “It’s an absolute godsend that her mom had the instinct to act on it and say something. If it was me — and I think a lot of parents are like this — we’re just keeping an eye on it, until she said it was excruciating. But had we done that, this would be a different story.”

Cait is holding steady. On her good days, of which there are many, she’s riding her bike, walking the dog, up and about with little issue, like she’s not even sick anymore. Sometimes, her father said, she’ll wear a beanie when they go out. But other days, she just doesn’t care, ready to face the world as she is.