RBUSD, BCHD may partner on pool 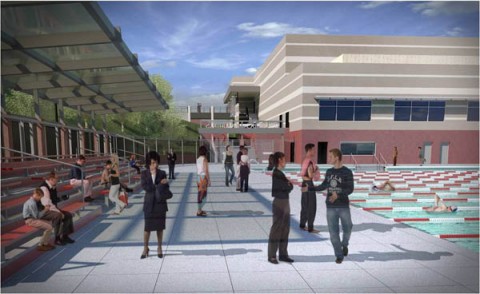 A sketch of the aquatics center under construction on the Redondo Union High School campus. Courtesy of MVE Institutional

The Redondo Beach Unified School District is building it. And they want you to come.

The district, as part of its $145 million school bond construction, is building a state-of-the-art $ 9.8 million aquatics center that is scheduled to be completed by September.

School board president Todd Loewenstein and Superintendent Steven Keller last week appeared at the Beach City Health District board meeting to begin a discussion about how the two agencies can work together to make the new facility broadly available to the public.

“What we’d like to do is open it up as much as possible to the public, especially since the folks writing their checks every year or six months for property taxes – they deserve to use the pool,” Loewenstein told the BCHD board.  “Of course, our first priority is for the high school and competition…but there is a lack of aquatic centers in the area so we want to make sure as many people as possible use the pool.”

The pool, 25 yards wide and 40 meters long, will be the largest in the area. The school board recently moved to add a “zero-entry” ramp to make the pool more accessible to seniors, handicapped people, and children.

Keller said that the school district is interested in partnering with the health district in order to better serve younger and older populations and possibly provide programming.

“We are good at K-12 and adult education,” Keller said. “We have adult education programming, and the zero entry we believe accommodates that component, helping with our adult education as well as with our seniors. And quite frankly, that is not our area of expertise, so reaching out to the entire community, whether newborns or seniors, is really what our board wished to accomplish in this.”

Keller said he and BCHD Executive Director Susan Burden simply wanted to begin a dialogue between the two agencies to see the partnership would entail, financially and otherwise.

“We are starting with just a dialogue of trust,” he said. “We have had just a great relationship in the past.”

BCHD board members were largely receptive.

“This is exciting to me,” said board member Joanne Edgerton. “I’ve been wanting to see an aquatics center here…I’m going to push for this.”

“I think there is definitely things for staff to discuss with you, but there are still a lot of questions in figuring out what we could do and when we could do it and what you would be expecting in terms of financial commitment,” said board member Vanessa Poster.

The board voted 3-0 to direct staff to begin discussions with RBUSD. ER